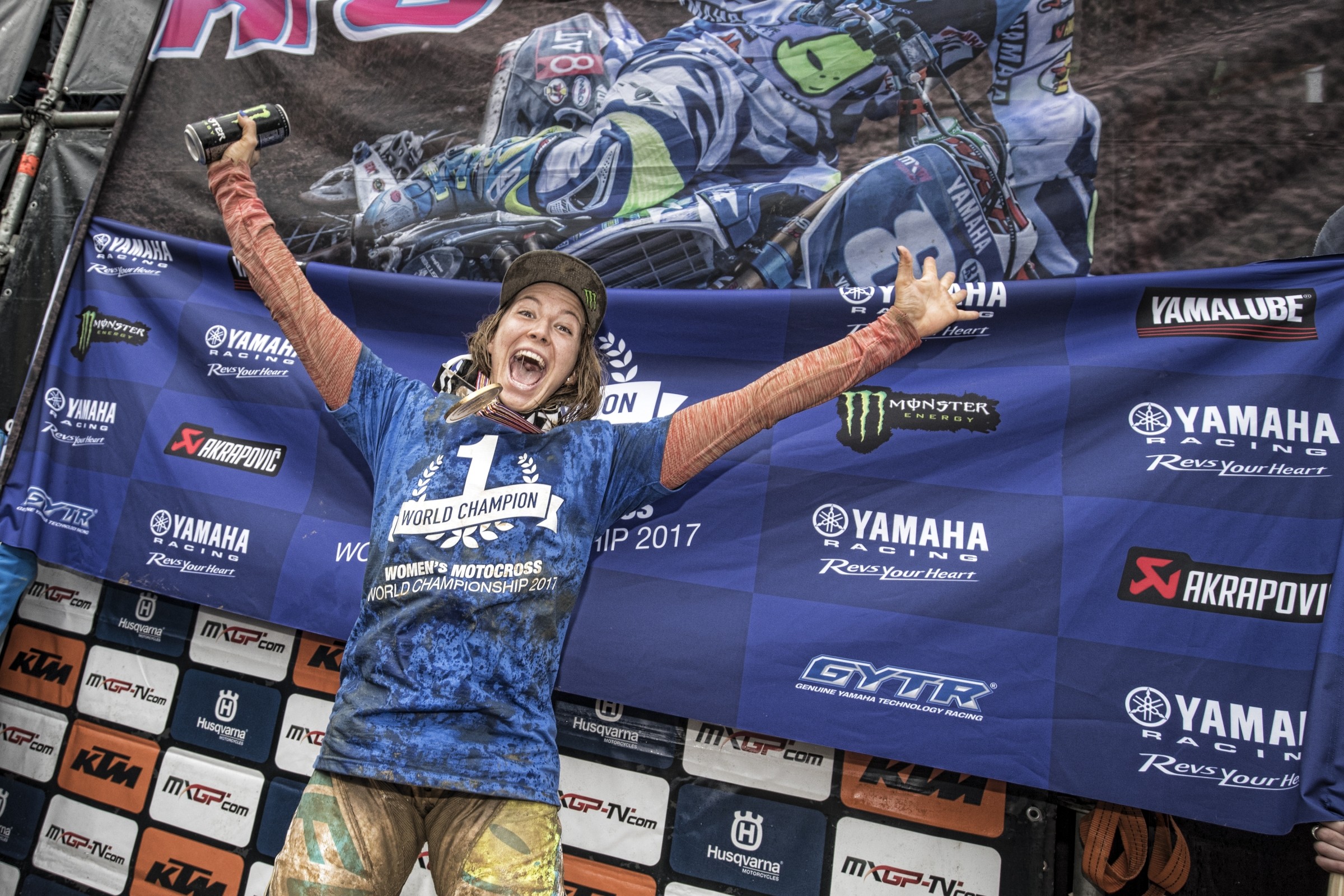 The 2017 WMX FIM World Championship had it all: four riders separated by only a few points, protests, crashes, terrible weather, elation, deflation, surprises, retirements, and a captive audience for yet another final round decider last weekend in France for the curtain-closing Grand Prix of the MXGP term.

Italian Kiara Fontanesi triumphed for the fifth time to become the most successful female motocross athlete in the history of the sport (German Steffi Laier had four crowns but one was WMX at “World Cup” status in 2005). She did so in epic fashion by surviving the slippery mud and atrocious conditions in the second moto Sunday morning—a race that at various stages saw three different girls holding the mantle of world No.1 as only two participants classified on the same lap.

A twist had occurred the previous day and after the first moto when winner Fontanesi was penalised for skirting around a blocked hillside full of crashed bikes and marooned riders (the steep section was cut out for Sunday) on the last lap. She appealed and after deliberation Race Direction reinstated the original classification. It was a verdict that all but excluded Yamaha brandmate Courtney Duncan, who was a victim of the melee while leading from the title equation, from title contention and forced Fontanesi, Livia Lancelot, and Nancy Van de Ven into a showdown where they were separated by one point going into an even wetter Sunday.

Through the slime, confusion, and general carnage on the track Kiara picked her race bike up three times to reach the finish in third place and start the celebrations for the fifth time from the last six years. After the emotionally draining experience we spoke with the champion to ask her about the ordeal and recovery from a difficult 2016.

Racer X: Crashing, enduring, winning the overall GP and then learning of the championship by one point—there cannot have been many crazier thirty minute periods in your career.
Kiara Fontanesi: It is quite difficult to talk about it now. When you win the championship you don't really realise it until the day after. I’m a bit confused at the moment! We knew we had to come here and go 1-1 this weekend and I managed the first part but the second race was a bit weird. It was a strange situation. We didn't have warm-up so I wasn't sure where I would put my wheels and the track was almost under water. I saw it would be a difficult race. When you stand behind the gate and you see the track in that condition then you know it will be a lottery and you just have to survive. It was not about riding skill. I knew if I started first then I needed to go and if I didn't I’d have to try to save the race and reach the end, which is what I did after trying to push and crashing three times. I said to myself “you cannot push, just do your rhythm and try to get around to the finish.” I could do it … and Nancy couldn't and that was enough for one little point to finish the championship. It was strange because I didn't know where I was or how were the standings or who was leading. It is disorientating racing in the mud.

Then you reached the finish…
Yes. A few people were there like Eddy [Seel] from Dunlop who said to me that I might be winning. And I said “What? The GP or the race?” and he said “the championship.” I laughed. A lot of things had gone on in the race and I thought “it couldn't be me…” but then Lisa Leyland [TV presenter] came to do the interview and I couldn't believe it. I threw away the bike and had to lie down because it was over and I had an amazing feeling. To win four in a row was something special that nobody had done before but to come back with Yamaha when all the other riders were there, to have many ups and downs, struggles and muddy races was quite special. It was a championship where you could not really prove what you were able to do, but finally we made it to the end and the gold plate is all that counts.

The last race was almost like a small summary of the championship: whoever managed to endure would take the prize.
Of course. We knew any of us would have the chance to take the title and for some reason maybe god was looking over me this time and made it happen. I finished the race because I wanted to do it for myself. There was a point where I didn't care about the championship. In the mud races this season and last year I didn't reach the flag, so I wanted to make it. I wanted to get up the hill every lap. I think this approach made my championship.

Was there a moment—maybe after the second or third crash—where you thought: “sod it…”
Yes, but I also had it in my mind that I would win the championship this weekend. After a difficult free practice on Saturday morning I woke up and it was like I was a different person. I felt no pressure and the nerves were gone. I rode with a free mind and without thinking “I must get the title!” and I think that's why won and did things like set the fastest lap in Timed Practice. I didn't even feel like I was on the bike when I did that. I tried to take every inside line to make the track as short as possible and go through the gears: I didn't have the power to brake hard or open the gas, and with that I was fastest with a time two seconds better than anyone. I never lost the focus. Even when people passed me in the first moto and it started to rain. I thought “I will stay here because if they continue to ride like that then they will crash” and that's what happened.

What about the protest and change of results? How did that rattle you?
It was frustrating. One moment happy, then sad, then happy again. When I heard about the protest I knew nothing could really happen because the race finished and I didn't cut the track. There was no other option to get up the hill. They said they had red flagged it and I wondered how that was possible when it had finished. That was why the results were changed again.

With five FIM world championships you truly are one of the most successful female motorcycle racers ever—even more titles that some of the men—will that get inside your head in the coming days and weeks?
For sure. I will start to think of all this from tomorrow because right now we are still at the track and at the heart of all the confusion and emotion. It is hard to have perspective but when I do something like get my phone and start to see all the pictures and comments then I know that it will feel amazing. I already know nobody has won five times before. I am doing what I love and I didn't plan to win four, five, or six titles but thinking about five starts to feel like quite a lot. You always start and live by imagining just one title and it can sometimes happen with luck, but five is not about luck. I’m really happy because I came back from a bad year in 2016 and it was something I really wanted, right from the moment we finished in Assen last year I started to work really hard and make big improvements. I was pissed off a lot this season because we never had good track conditions to show our potential so most of the time I was racing under my limit, like at 50-60-70 percent for one reason or another.

You have won championships in dominant style and also in the final round and last race. Can you tell me what it feels like to be number one after this particular contest and when the four of you were swapping wins, DNFs, good luck, bad luck—you rarely see a world championship so close.
Of course it doesn't feel easy. One reason why we have struggled with the points in the championship and it has stayed so close is because we only had six rounds and it is not much in this sport where the results are not always about you but about the weather, the bike, and the track conditions. Racing is racing and anything can happen. Especially in six rounds and even if you are the fastest sometimes you cannot open up a gap in the championship. We rode many motos when they were a lottery and usually the second races were on a flat track [scheduled first thing Sunday morning] full of mud or underwater. What can you do? The race today was not about being a good rider or a fast rider. It was about being able to survive and keep going and Assen and Indonesia was also like that. Loket was not raining but the track was muddy. You cannot make the difference [on the others with points] when it is like that. To win the championship at the last round is not easy, and to still believe I could do it has something to do with the fact that I have done it before. I won in the past and I believe that’s because I was always the strongest mentally and could keep focussed. I wasn't scared and I had nothing to lose this weekend—I have four titles already—but to try and have fun and win it again.

What now?
Honestly, I have been saying that if I won a fifth then I’d love to stop world championship racing by going out at the top. It is an amazing thing to say you won the GP, the title, and then stop. But the reality is that I enjoy it a lot. I know there will not be any overseas WMX races next year and there will be two rounds in Italy, including the final GP in Imola. The organisation wanted me to be there racing. It is a nice opportunity and another reason to keep motivated and go for another season and title. So I won’t stop. I was thinking about ending my racing but that is not in my mind anymore. I will take a few days rest but keep training because my next race will be in Sugo [Japan] in October and Yamaha gave me a nice chance to go. It will be a big deal and a nice experience to race there. So we’ll prepare for that, then have some time off and keep ticking over until January when we’ll start all over again.