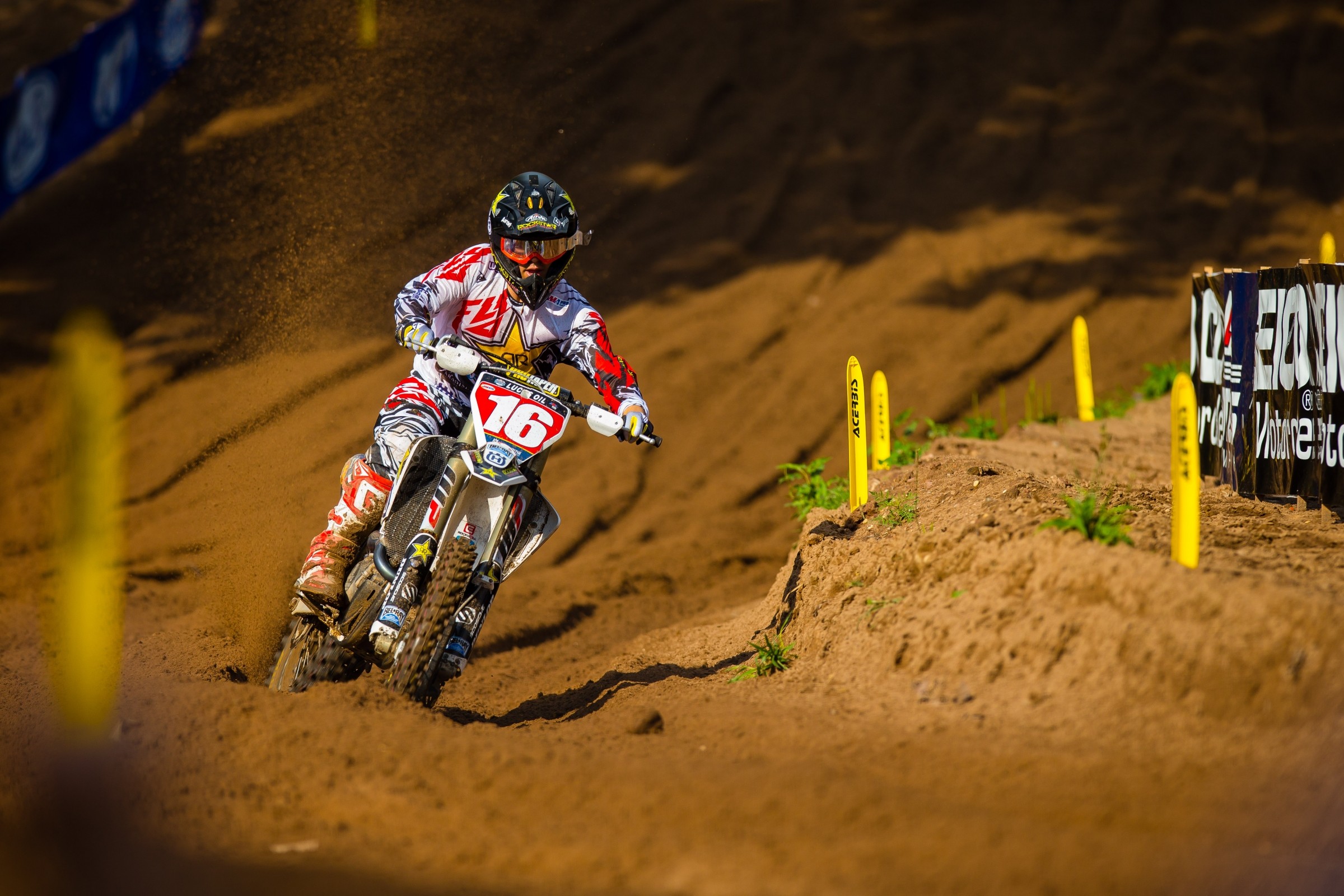 Breakdown What Are Team USA’s Options?

The Motocross of Nations is my favorite event of the year. There is simply no other race with the tradition and history that the MXoN carries. Pitting each country against each other makes this race feel more like the Olympics than a motocross race. American riders battle against each other all season long, but for this one weekend their interests align. The camaraderie and patriotism separates this race from all of the rest.

This year, the American team is facing a daunting situation. Injuries and extenuating circumstances have hit the USA hard, removing options and putting the team in jeopardy. It wasn’t always the case, though. As we entered the Lucas Oil Pro Motocross Championship, we were looking strong.

We had Eli Tomac to lead the team and for my money, looking ready to beat anyone on earth. For the MX2 spot, Zach Osborne was on a tear, too. He was coming off a supercross title and transitioned into a 1-1 finish at the Hangtown opener. The final spot was the only real question and even then, we had options. Blake Baggett and Jason Anderson looked to be the best bets as they both had MXoN experience and were firing on all cylinders. Choosing either would give us a crazy strong team. Everything looked rock solid—until it didn’t.

Flash forward to the end of July and everything has gone sideways. Eli Tomac has decided to forego his MXoN trip for the second year in a row. The schedule and contracted races just don’t work for Tomac and Monster Energy Kawasaki. With over a month between the last Lucas Oil Pro Motocross Championship event and the MXoN, the Americans are forced to stay outdoor motocross ready far longer than anyone would deem ideal. Even with the addition of the USGP to his schedule, he still has another full month of outdoor motocross added to his calendar instead of what he is really concerned with: next year’s supercross championship.

That September month is the only real time off for the American riders. October isn’t “go time” yet, but with the Monster Energy Cup on most schedules, riders have long since switched their focus away from motocross and back to supercross. For Tomac, this is the real struggle. If he did indeed choose to ride the MXoN, he essentially foregoes any downtime for the entire season. Further, he puts himself behind the curve for his title sponsor’s premier event in October. As the rest of his rivals are resting after an eight-month grind, he would still be outdoors putting in 30-minute motos. As they began ramping up for Monster Energy Cup, he would either be heading overseas or recovering from the event itself. It simply puts him in a bind for a very important event to his sponsor and more importantly, throws off the schedule for his main goal, the 2018 supercross title. It’s just bad timing, plain and simple. As much as I dread heading to this event without Tomac again, when the calendar is laid out and knowing what I know about riding schedules, preparation time, and down time, I can absolutely see how this decision is reached. I hate it, but I get it.

As for Blake Baggett, he was on fire just a month ago. He was leading the points chase and appeared to be a shoe-in for the Open spot. Then, at RedBud, he tangled with Jason Anderson and everything changed. In that crash, he suffered a thumb injury that isn’t going to heal without surgery. He is still out there fighting through the pain, but his results have suffered. He isn’t able to ride how he would like and hasn’t been practicing as he normally would. Put simply, he is a shell of his former self. Instead of lining up for the USGP or MXoN, he will be heading to the operating room. He will get his thumb fixed on Monday after the final round at Ironman at the latest, and possibly even sooner if things get worse. So, take Baggett off the list.

Jason Anderson could have been the easy choice for Open as well. The choice between he and Baggett would have been an interesting one. Anderson was on the 2016 American team and rode valiantly to a moto victory. He wasn’t able to finish the deal last year after a Japanese rider landed on him as the checkered flag flew. It was a horrific accident that cost America a great chance at victory. With Baggett’s thumb injury, that uncertainty was removed and he was the no-brainer. Then, right on cue, things unraveled for Anderson as well. He had a big crash leading up to Southwick, forcing him out of action. As far as the MXoN goes, this wasn’t a big deal. He was just sore and would be 100 percent within a few weeks. Then, as he looked ready to return, he had a nasty bicycle crash that separated he and a few layers of his skin. He’s missed the last three rounds of the series and just this week, the final blow was dealt. It was learned yesterday that Anderson would forego any chance at the Motocross of Nations as he will get a bothersome plate removed from his foot in order to be 100 percent for 2018.

So, who’s up next? In my opinion, the next option would be Cooper Webb. A veteran of the team, Webb would be a solid choice and also provide him a chance at redemption. Last year’s crash weighed heavy on Webb and I would guarantee he has replayed those final laps over and over in his mind. The problem here is that he just went out of the series with a meniscus injury and further, hasn’t been the same rider that we saw last season. He’s had good weekends, but on others, seemed to struggle with bike settings. The 2018 machine could be the answer he needs but with rumors of him not racing the new bike until after outdoors are over, that decision would be made blind. That, of course, is assuming that he will overcome the knee setback and be ready to roll come late September, too. Webb is in play here, but there are several moving parts that could make this all moot.

Cole Seely is a good choice according to the points and he rode incredibly well last weekend in Washougal. I am not sure how he feels about this event, but he could very well find himself headed to the UK for the stars and stripes. Seely’s talent is undeniable but with inclement weather always a factor in the UK, how would he fare? He does have a potent factory Honda at his disposal and he’s never been on Team USA, so his motivation should be high to prove any doubters wrong. I never really considered Seely for this spot until recently, but as I go through the options he’s becoming more and more of a fit.

Justin Barcia would be very high on my list in a perfect world. He has raced this event several times and always rises to the occasion. He knows the drill and takes the race seriously. He also rides mud incredibly well, gets great starts, and is not scared to smash and bash when things get dicey. The problem here is two-fold: his team situation is murky for next year and as the race pushes deep into the off-season, it creates a myriad of problems for this event. If he indeed does leave the JGR squad, he will be in transition mode and not in a position to commit to a race that requires this much notice and preparation. Also, he just suffered a head injury at Washougal that puts his status in limbo. For a rider who has been an easy choice on several previous teams, his situation is all over the map this year.

"My biggest hope is that we take a team that truly wants to go. We have enough talent to be in the mix this year, but we need the riders to be all-in."

Barcia’s JGR teammate Weston Peick could find himself being tapped on the shoulder, too. Peick is a tough character and that’s what this event demands. He isn’t easily intimidated and has plenty of experience in Europe as I have raced with him there myself. I am not sure he was on anyone’s MXoN short list until recently, but he has to be in consideration now. I also think he would take this race seriously and want to be there, which is a huge factor at this event. The timing puts a bad taste in many riders’ mouths and their preparation suffers. I think Peick would want to show the world he is up to the task if given the chance.

Jeremy Martin could also find himself asked to ride the 450. His great ride at Daytona proved that he can make it happen on the big factory Honda and he’s gone through the MXoN ringer before, so he makes sense on paper. The questions here are if Honda wants to put him on the 450 and if Jeremy wants to go. He’s had his ups and downs this year, but he’s an outdoor warrior. Knowing his dedication and prior approach to this event, I have a feeling he would jump at the chance. Keep an eye on this option as I think it will pick up steam.

Another option on the horizon could be Alex Martin. To get A-Mart in, we would have to do some shuffling around. He would be an MX2 option as he doesn’t have any 450 experience as of late. Could we move Osborne to MX1 and have a Martin brother combo for MX2 and Open? Both Jeremy and Alex are MXoN veterans and would work hard for this event, but with Alex’s recent injury, will he be ready? Also, would Husky and Osborne want to move him out of MX2 after such a great year on the 250? There are more questions than answers in this scenario, but it’s a long shot option. It would be a cool story to have two brothers representing the USA, though.

All in all, this MXoN situation is a mess. We don’t have our first, second, or maybe even third best options available. Team USA has lost five years in a row and as we have seen in this article, we are having a tough time even building a team at the moment. I do think we should attend the event this year even with the hardships we are facing. We have won in similar situations before. The team with Ryan Dungey, Jake Weimer, and Ivan Tedesco was not the favorite by any stretch of the imagination. My biggest hope is that we take a team that truly wants to go. We have enough talent to be in the mix this year, but we need the riders to be all-in. Even the best team will lose if unprepared and disinterested. Regardless of what happens, the debate over who to send will be a hot topic for weeks to come.