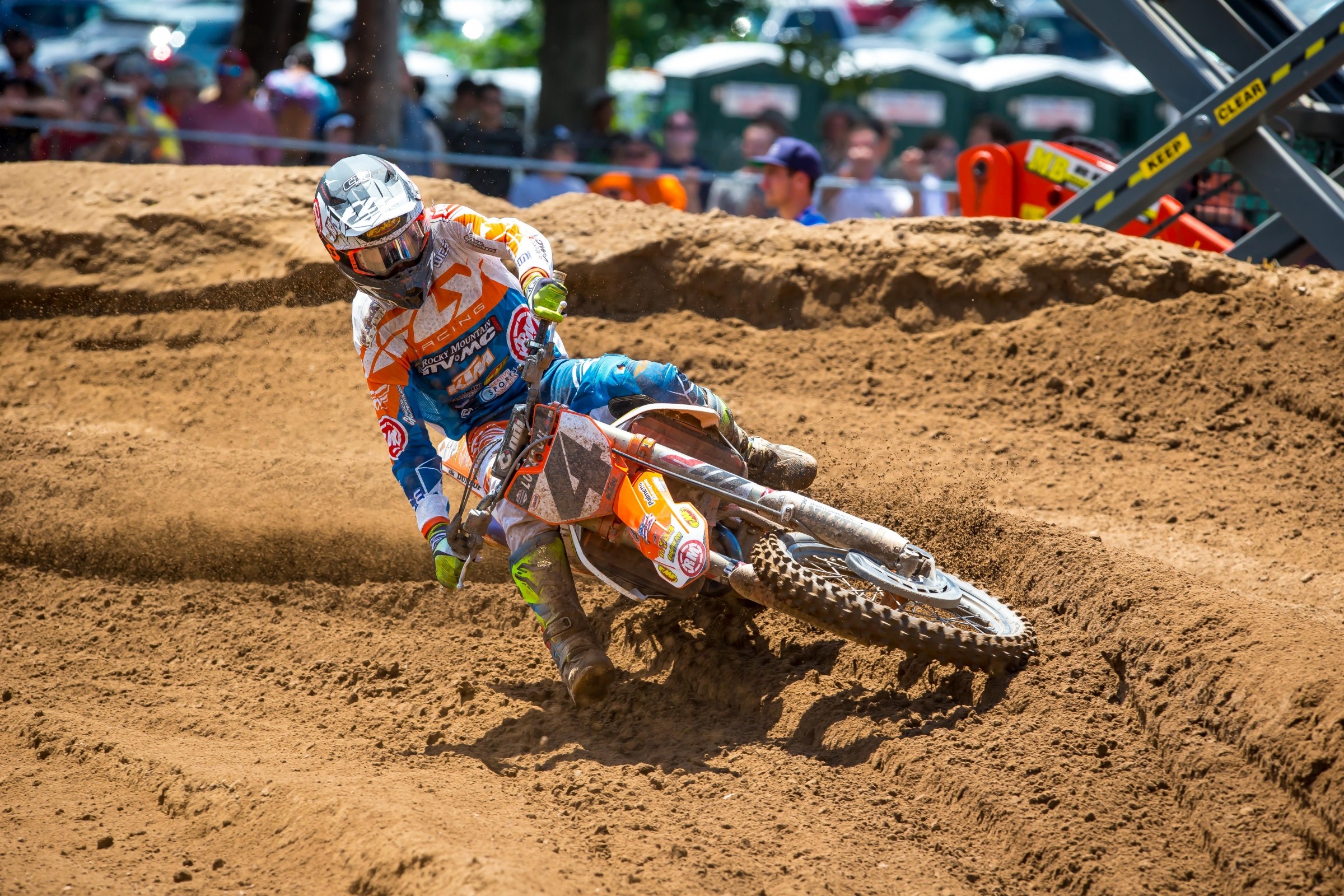 Millville, Minnesota, is home to Spring Creek Motocross Park, but for most of the moto world, it’s simply known as Millville. This is a race that most riders look forward to for one simple reason: the track is awesome! Fun is not usually an important variable when it comes to pro racing. There is so much stress and pressure on the riders, it’s all about performing well and meeting expectations. When the track is actually fun, though, it makes the day much more enjoyable. Qualifying practice is fun to ride and once you have your lap logged, you can throw some whips and generally enjoy riding. There is traction in every area of the track and the elevation isn’t rough enough to be scary. As the track gets rougher, some of the fun turns to work but it’s still one of the tracks that makes riders smile inside their helmets.

Millville is in a remote location to say the least. Rochester is where most of the teams will stay but driving down from Minneapolis, you really get a good feel for the Minnesota countryside. The endless corn fields and slower pace of life always put me at ease on race morning. Flying around the world chasing the moto scene is a hectic lifestyle, but I always tried to take a few minutes to slow down and enjoy summertime in Minnesota. That’s not to say it can’t be hot, though! The humidity can be brutal and a few of the hottest races I can remember were at Millville. The cool morning can lull you into thinking the 85 degree day will be ideal but as afternoon sets in, the humidity smacks you back to reality. There is a chance of thunderstorms on Saturday which has me thinking the humidity will be ready to rumble Saturday afternoon.

Everyone who has heard of this track knows about the sand whoops. The Martin family brought in even more sand this year so look for them to be bigger and tougher than ever. The sand whoops are a great passing spot, but they have also given us some horrific crashes through the years. I can remember heading into them each lap and just holding my breath and hoping for the best. The best approach is to find your rhythm and try to duplicate that each lap. I would use the parade lap to decide exactly where and how I was going to attack them and then do that for the next 35 minutes. Many crashes have happened when riders try a different line and hit a bump at 40 mph that they weren’t aware had formed. The whoops are so long that if things start going sideways, they generally continue to worsen. I wanted to know exactly where I was going and which bumps I should expect.

Another critical aspect of this track is the many downhill sections. Many passes are made in the braking zones of these downhills. If you don’t have the confidence in your suspension to push through the big downhill bumps, it’s going to be a long day. The center section of the track is basically spent going up and down the hillside. Watch for the fastest riders to push the envelope down the hills as they are a great opportunity to make up chunks of time. This track is also not easy to pass on and the downhills offer passing for the brave.

Will Blake Baggett still be nursing his thumb or will he turn the aggression level back up?

Can Zach Osborne beat Alex and Jeremy Martin in their back yard?

Will Cooper Webb build from the step forward he took at Southwick?

Dean Wilson grabbed his first podium on a 450. Is this the new normal?

Will Jason Anderson be back to 100 percent?

Eli Tomac is ablaze. He won Southwick with a 1-1 score and has pushed his points lead to 19.

Osborne has been rock solid and sits on a 45 point lead. He has done everything right so far.

Dylan Ferrandis turned heads with his dominant moto one win in Massachusetts.

Martin Davalos is exceeding expectations on the 450. His fifth overall was impressive.

Henry Miller is steadily progressing in the 450 class this summer.

Marvin Musquin is nearing 100 percent, but still is having a tough time. His big crash in Southwick could have been much worse.

Anderson had a big get-off before Southwick and wasn’t able to race. He lost valuable points in his bid to get in the fight.

Josh Grant crashed in the second moto, hurting his knee in the process. He will most likely miss the rest of the outdoors.

Justin Barcia rode well in the sand, but ran out of fuel on the last lap. He has just had a tough time getting back to the level he expects.

Justin Hill’s outdoor season has been rough to say the least. He still has the ability, but it just hasn’t come together.

Tomac keeps hammering after his off weekend of hammering.

Weston Peick has gone all Rastafari and keeps calling everyone “mon” after his trip to Jamaica.

Jeremy and Alex Martin tell everyone to get off their lawn by sharing moto wins.

Barcia’s fuel setup is a bit different for Millville.