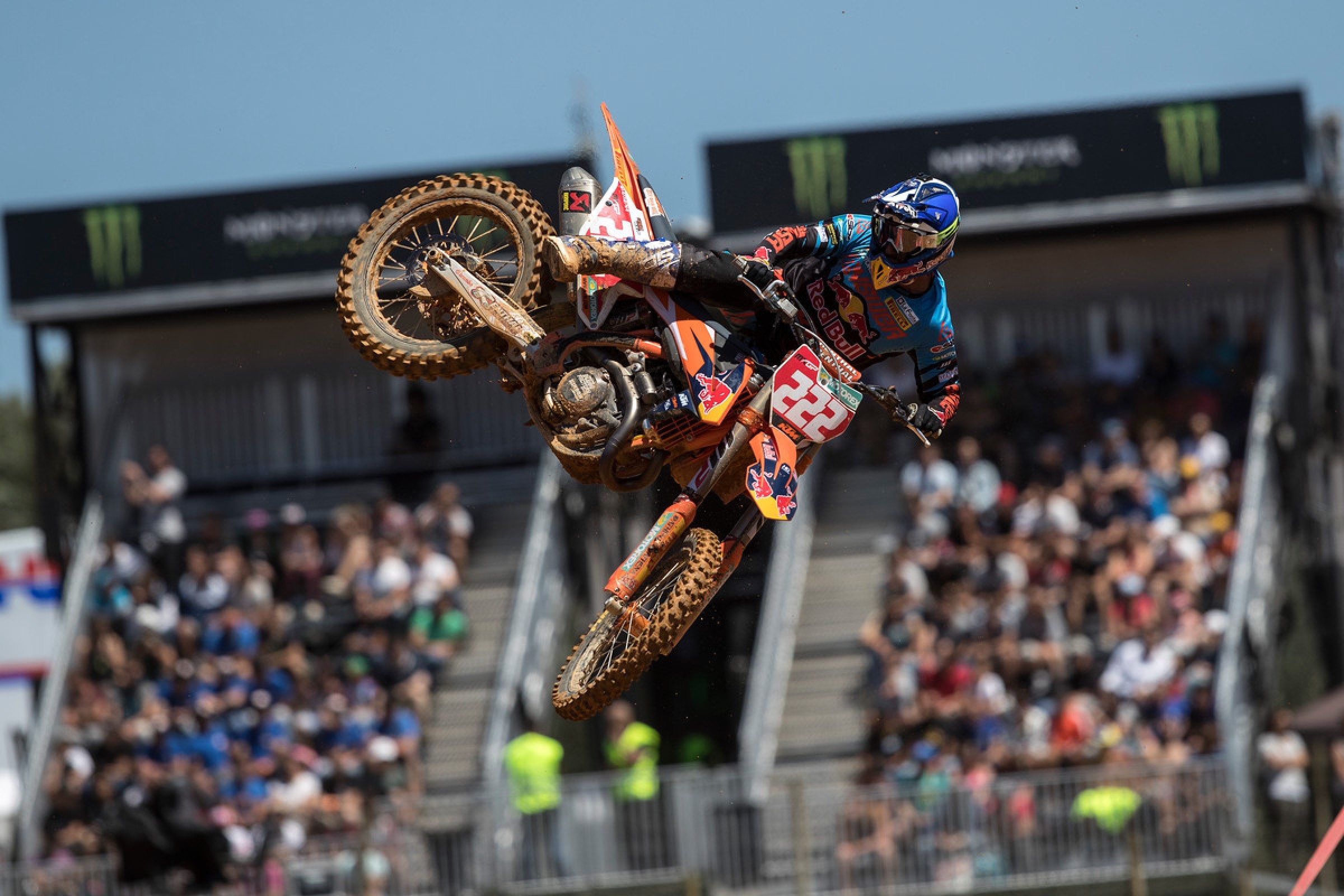 It wasn't sand and there were a few less degrees on the mercury scale but the Grand Prix of Portugal—the first since 2013—was almost just as demanding as the sapping event in Ottobiano, Italy, the previous week as the slick, loose top soil of Agueda threw a plethora of bumps and knuckles at the MXGP pack for what was the 12 test of 19 in 2017.

Not to be found wanting or lagging was eight-time world champion and current tour de force in the premier class, Red Bull KTM’s Antonio Cairoli, who extended his duel with brand mate Jeffrey Herlings from Italy to the western tip of Europe and recorded his fifth win of the year, second in a row, and the 82nd of a phenomenal career (just 19 left to topple Stefan Everts’ seemingly untouchable total). It was also his first for KTM on Portuguese turf, meaning since 2009. The 31-year-old Sicilian shared moto wins with Herlings who was in a better physical state than Ottobiano, but still complained of a headache and the lingering effects of his heatstroke from Italy. Cairoli escaped with the second outing to claim the top step of the box after Herlings had gained revenge for the sandy schooling the previous Sunday by stalking and swooping past his older rival in race one.

There was little to separate the KTMs on the day and Herlings seemed a calmer and more analytical performer in Portugal on a track that threw up some extremes: big jumps, big speed, big bumps. He sliced a margin of seven seconds down to four at one point in the closing stages of the second moto, but Cairoli rallied for two laps and inflated the cushion. The upshot of Herlings’ fifth podium from the last six Grands Prix means he has pushed to within five points of Monster Energy Kawasaki’s Clement Desalle and second place in the MXGP table.

The Belgian was involved in a juicy contest of block passes and close-calls with Monster Energy Yamaha’s Romain Febvre in the first moto; Febvre showing more signs of a return to the pomp of 2015 and 2016 with his second fourth position on the bounce and edges nearer to a first trophy of 2017 after issues with confidence and comfort with his race set-up. Desalle was undone at the start of the second race when he could not avoid the tumbling Jose Butron. He still rode well to recover back to 10th place on a layout that had one predominant fast line and required energy, invention, and often some cheek to exploit areas for overtaking.

MXGP’s propensity to provide unpredictable scenes and results based largely on starts was highlighted again with Rockstar Energy IceOne Husqvarna duo Gautier Paulin and Max Anstie fading a little into the background (Max Nagl shining brighter in fifth overall and the German’s plans for 2018 are still unknown) and Tim Gajser continued his path back to fitness and form. Returning Belgians Kevin Strijbos, back on the Suzuki after recovering from an elbow problem, and Jeremy Van Horebeek, steering the Yamaha after a broken finger had healed, were frustrated to suffer setbacks: Strijbos tweaking his back and JVH unfit and unsure enough to duck out of the second moto.

Strijbos was able to watch teammate Arminas Jasikonis hammer a career milestone into the red Agueda dust. The 20- year-old rookie became the first Lithuanian to make a Grand Prix top three in the modern era. The confidence boost of briefly circulating with Cairoli and Herlings at Ottobiano seemed to pay off here and combined with effective starts Jasikonis produced a personal best to sit third overall. His flight to pass Nagl in the second moto was particularly impressive.

Motos were shared in MX2 as well and the same podium trio of Suzuki’s Jeremy Seewer, Red Bull KTM’s Pauls Jonass, and Rockstar Energy Husqvarna’s Thomas Covington walked into the media centre post-race for the formal press conference, and in that order. Seewer and Jonass split the honors which means the gap between the pair stays at 38 points in the latter’s favour, but they are evenly matched and the tension will creep up with the onus falling on who will drop the ball first in the seven races to come. What Seewer lacks compared to Jonass’ never-failing excellent starts with the KTM 250SX-F he makes up for with attacking intent and a certain amount of guile. The Swiss was as aggressive and fearless as he has ever been in the second moto as he gunned a path after the vanishing Jonass and left the strong Latvian in his roost once his work was done.

Seewer has blasted his way through being a student to place 10th, fifth and second in the MX2 class in the last three years and has his sights firmly on the top spot in what is his last attempt at the category and before he ages out (a factory Suzuki MXGP ride already beckons for 2018). If only he could get more from that RM-Z 250 away from the gate. Jonass meanwhile has been consistent and boasts more podium finishes (10) than any other rider in any class; Grands Prix in Lommel and Assen sand will be hand-rubbing prospects for the KTM man so Seewer will have to find some advantage on the hard-pack tests in Loket, Villars, and Uddevalla.

Portugal saw Covington again effective and the American set off from pole position for the second weekend in a row. He commented on the relentless rippling nature of the track and was relegated by Jonass in the first moto but is riding like the outside title contender many inside the sport believed he was capable of before the season began. Three podiums now for Covington marks a personal highest to date and he lies just 52 points away from the top five in the championship standings. His teammate Thomas Kjer Olsen was back on form after the slight stomach complaint he endured after a Saturday crash in Italy and Brian Bogers’ wavering season showed possibilities of righting itself for the Team Netherlands podiumee at Maggiora last year.

Noteworthy was AMA racer and Venezuelan Anthony Rodriguez who clearly benefitted from more time on the Honda since Ottobiano and was eighth overall.

MXGP sweated through eight days that must rank as the most exhausting stint of the long campaign so far for the Grand Prix elite. Thankfully a break of a fortnight will allow the limbs to ease and energy to be replenished before the slippery hard-pack of Loket and the Grand Prix of Czech Republic in mid-July brings the temperatures up once more.