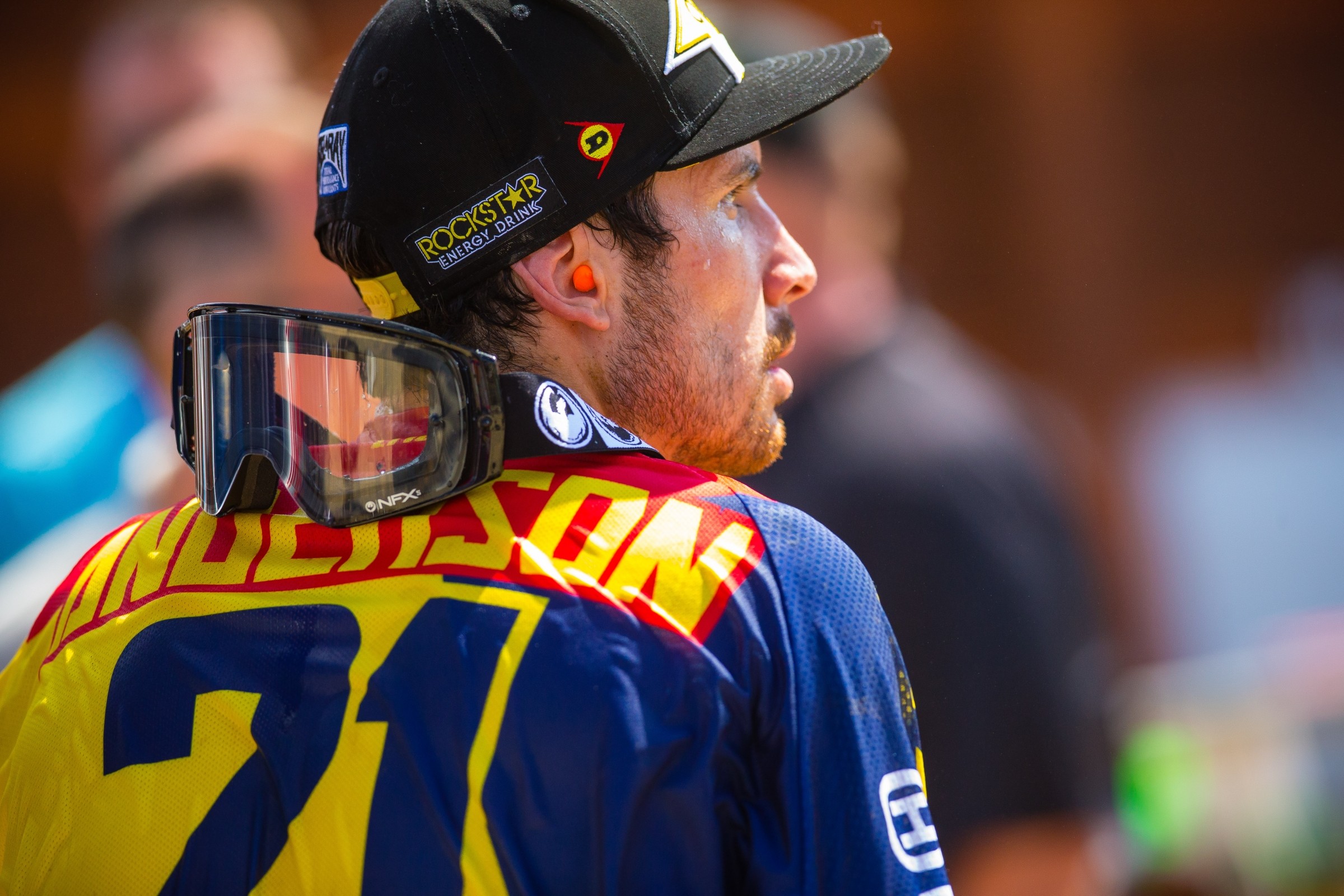 Breakdown So Far So Good

We are five rounds into the Lucas Oil Pro Motocross Championship. It seems like just yesterday we were leaving Hangtown. We have seen incredible racing thus far and I have a funny feeling that the points are going to get interesting as we head down the stretch.

As a rider, there are several times during a season where you assess how the season is going and where improvements can be made. For fans, that assessment seems to happen after every moto. We all jump to hard conclusions even though we often know better. Racing is so unpredictable for many of these riders but our opinions swing wildly along with their results. As a fan myself, I wanted to take a look at several key riders and share my viewpoint as we approach the halfway mark of the series.

Wacko Zacho came out firing at Hangtown, running away with 1-1 scores. He was fresh off his 250SX East Region Supercross title and displayed that confidence and momentum. He had a few hit and miss motos afterward, the worst of those in Colorado when he was a bit under the weather. He opened the door a bit for Jeremy Martin but at Muddy Creek he put 18 points into him and five more into brother Alex. He isn’t dominating the win column by any means but he is stacking big points each time out and putting huge pressure on everyone behind him.

Consistency has been the name of the game for A-Mart. He hasn’t won an overall yet but he did snag a first moto win at Colorado. His biggest strength is not giving big points to his competitors. His worst moto of the season is a sixth place at Glen Helen. That consistency is tough to beat in the 250 class, where mistakes are so commonplace for the youngsters. His speed has been solid but he has also left points on the table at times. He had a big opportunity in Pennsylvania to cut into the points lead but was unable to hold the frenzied pace. He is a strong second place right now, but to win the title he will need to win a few of these along the way. Consistency is great but he sits 31 points down and needs to bring that back to a manageable number.

Two-time champ J-Mart has been feast or famine this season. He started the year with a disastrous DNF in moto one, leaving Hangtown a full 30 points out of the lead. He was slowly climbing out of that hole and found himself down only 18 points, but Muddy Creek really put him in a bind, as a first turn crash relegated him to 13th in the first moto and he was only able to muster a sixth in the second moto. He gave up 18 valuable points on Saturday, pushing his deficit back up to an ominous 36 points. He has the speed and fitness to win but his bad motos are killing his chances for a third title.

It’s been a woulda coulda shoulda type season thus far for AP. He picked up the overall win last weekend, making his last four motos an impressive 3-3-1-2. Unfortunately, his prior three motos were 13-7-DNF, which leave him in fourth place, 42 points behind Osborne. His speed and ability are championship caliber but it will be hard to get into title contention unless he eliminates the big mistakes. If he can continue this podium level riding and catch a break from Osborne, he could be right back in the mix. There seems to be two big factors for Plessinger’s success: his start and whether or not he has a big crash. If he can lock down those two variables, he will be at the front all the way to Indiana.

In his second outdoor season, many had Forkner pegged for a title favorite. He ramped up steadily last season and he was leading motos at the end of 2016. His 2017 campaign started with four up and down motos of 11-2-DNF-6. That put him way behind the leaders and in full panic mode for the title. He sits 48 points out at the moment but his 3-3 score last weekend were a positive sign. He will need several wins to be a title contender but simply getting back into the conversation is paramount right now.

One of my favorite riders in the class, I watched AC grow up from his time on Cobras all the way to the pro ranks. His hometown is an hour or two from mine so I always cheered for him as the hometown boy. I also think he carries himself well and tries to look at the sport and world at large differently than most of the racing world, which suffers from tunnel vision. This season, I had high hopes for AC as he came in healthy for once. He came out swinging at Hangtown, leading the first moto for a long while before settling for a runner-up spot to Osborne. The heat looked to get the best of him the second moto but a 2-8 score was nothing to shy away from. It has been a bit of a roller coaster since then with mechanical issues making the points race tough to maintain. He is riding well, though, and his second place finish in moto one last Saturday was proof of that. He is one of the most talented riders in this class so don’t be surprised to see him win one of these before we leave Indiana.

The buzz around the SoCal tracks before the season surrounded BB4. He was consistently setting the pace and serving notice that he would be a factor this summer. His Hangtown didn’t go to plan at all, leaving him with 8-6 scores and a 22-point deficit to Eli Tomac. Glen Helen’s first moto wouldn’t help matters as he posted another eighth place score and lost even more points to his rivals. The tide would finally turn in the second moto as he led the moto before Jason Anderson would take the first 450 moto win of his career. Blake has been red hot ever since, winning both Thunder Valley and High Point and taking the red plate in the process. His speed has been incredible but his ability to limit the damage in bad situations has been even more impressive. His comeback ride from last to third on Saturday was a huge salvage to the championship lead. Make no mistake, though, if he wants to win the title, he will have to do better than 3-3. Everyone, including Blake, knows that.

If anyone were betting on this title, their money would have been on Eli. With defending champ Ken Roczen’s injury and Ryan Dungey’s retirement, Eli looked to have a paved path to championship glory. At Hangtown, that looked to be a rock solid assessment as his 1-1 seemed to be somewhat easy. Glen Helen’s second moto threw a wrench into the plans, though, as a brake issue relegated him to 19th place and out of the points lead. His woes would continue with a seventh place in moto one of Colorado and a 12th place in moto one of High Point. His speed was undeniable but he was having arm pump problems, mechanical issues, and to top it off, he was crashing, too. This opened the door for several others, but he did a good job of silencing the whispers last weekend, posting 2-1 scores and cutting into the points lead. He only sits four points behind Baggett. As a fan, I am just excited to have a battle at the top. I was one of those that were certain Eli would run away with this. Bring on the battles!

JA21 has been better than ever this outdoor season. He got off to a rocky start (sorry, had to) at Hangtown but has since turned it around, winning two motos along the way. He has mentioned several times that he is looking for that first overall win and if he continues his current pace, he will get that sooner rather than later. His confidence is growing with each moto win and with the uncertainty at the top of the points heap, this title is still within his reach. Regardless of how the rest of the season goes, he has proven that he is a legitimate outdoor threat.

Marvelous Marv has suffered a bit of adversity as of late, tearing his meniscus on Thursday before High Point. Entering with the points lead, he had a tough Saturday in Pennsylvania and then things got even worse in Tennessee last Saturday. Fighting through a seventh place in the first moto (thanks to hard contact by Justin Barcia on the last lap), he took a rock to his brake assembly in the second moto forcing a DNF. Just two weeks ago he was the points leader, now he sits 34 points back and also has a knee injury to manage. If things don’t get better soon and the title gets out of reach, I could absolutely see him heading in to get the knee fixed. Let’s hope for the sake of racing that he gets back into the fight at the front this weekend.

It has been a bit up and down so far for the rider that lists Holly, Michigan, as his hometown but is really from North Carolina. Having said that, he is still fifth in points and has given his RCH Suzuki team that oh-so important podium result already. He has had a few tough motos that put him squarely in the sights of Justin Bogle and Dean Wilson, but he seems to have a bit more consistency thus far. Top five in points is a big deal for the riders and teams so look for this battle to heat up. Bogle has improved greatly, winning a moto at Thunder Valley and putting his Suzuki up front quite a bit. Deano has been consistently putting up scores in the 7-9 range, giving him solid points through five rounds. If Dean can get a top three start, it will be interesting to see what he can do in “clean air.” He has been in huge battles seemingly every week and unable to really show his sprint speed. The fight for the fifth position in points may not grab the most headlines but it’s a fun story to watch unfold.