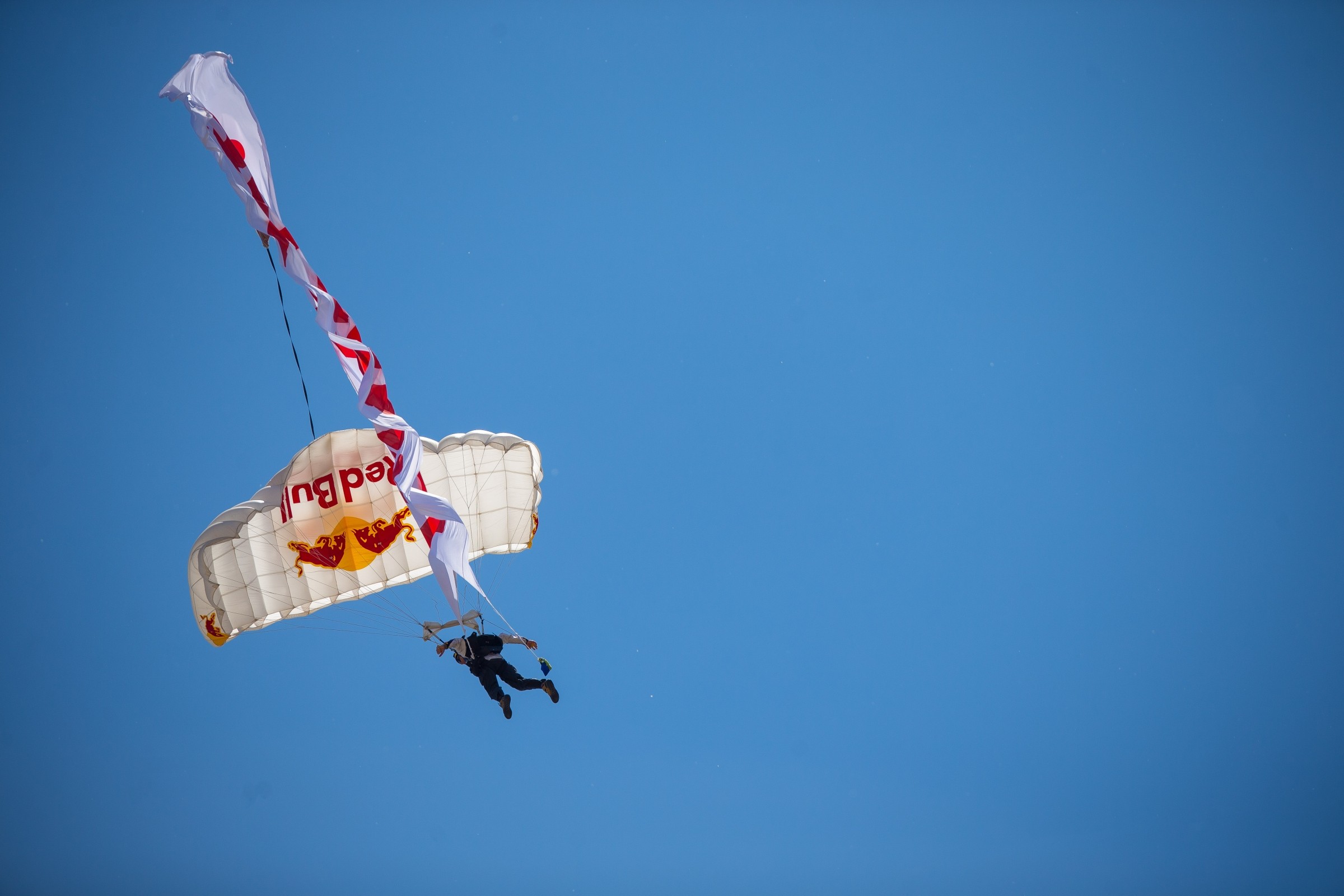 Nine-time MotoGP world champion Valentino Rossi was injured last week while riding motocross at Cross Park Cavallara, which is near his ranch in Tavullia. Rossi hopes to race his home Grand Prix this weekend at Mugello, but first has to pass a fitness test to determine whether he can race. Rossi apparently hit the handlebars in his crash and later went to the hospital in Rimini for a medical checkup, where he was diagnosed with mild thoracic and abdominal trauma. This photo of the Doctor meeting the nurses later showed up on social media. Gotta love, Rossi.

Posted on Instagram and shared by @riminitoday - the Doctor meets the nurses! Looking healthy and uninjured. pic.twitter.com/paq0e71toX

It Was Not a Good Week for Scott Dixon

Last Sunday, Scott Dixon won pole for the Indianapolis 500, which ran on Memorial Day, and things were looking up for the Verizon IndyCar Series driver. Were being the key word. Later that night, while on a dinner run to Taco Bell, Dixon and retired racer Dario Franchitti were apparently robbed at gunpoint at the drive-thru. The robbery occurred around 10 p.m. ET, which was located less than a mile from Indianapolis Motor Speedway. The Indianapolis Metropolitan Police said they arrested two teenagers, ages 14 and 15, in connection with the robbery of credit cards and other personal valuables. From USA Today.

Tony Kanaan, Dixon’s Chip Ganassi Racing teammate said, said Dixon had his wife’s wallet at the time of the incident. Kanaan said Dixon was making a food run for a group of drivers, including himself.

“While they were ordering with their windows down two guys approached at gun point,” Kanaan told The Indianapolis Star. “They held a gun at Dixon’s head and asked him for his wallet and his phone.

“You don’t expect that to happen, especially here.”

Then, in the race on Monday, Dixon got caught in the path of Jay Howard’s out of control car, and went flying in spectacular fashion. Fortunately everyone was okay.

REPLAY: @scottdixon9 checked, cleared, and released after this turn 1 incident during the #Indy500 at @IMS. #INDYCAR pic.twitter.com/gaD950M27F

Here’s to a better week for Scott Dixon.

While Dixon had an Indy 500 he’d like to soon forget, Japanese driver Takuma Sato shocked the world, winning the race by .2011 of a second. Sato, who had just one career win prior to the race, became the first Japanese driver to win the Indy 500. The Japanese commentary team called the win picking up where he makes the pass for the lead. It’s the best thing you’ll hear all week. Sorry, Weege.

MotoGP star Jack Miller survived what I’d argue is the scariest crash I’ve seen in some time. Two weeks ago at the French Grand Prix at Le Mans, the Estrella Galicia Honda rider had a stunning crash in turn two in practice that saw him bounce across a tire wall before going down again. “Whoever put that mound of grass between the pit road and the track was a good bloke,” said Miller. “He saved my life because it kicked the bike another way, so I had a little more time to slow myself down before I jumped ship…. My life flashed before my eyes; that’s as close as you get.” The Australian went on to finish the race the following day in eighth.

And he walked away! pic.twitter.com/ZA1TXlbzQa

World champion Jorge Lorenzo had quite the opinion on the matter after he and Miller clashed in a safety commission meeting on Friday, per Motorsport.com.

“He basically told me to shove my opinion up my arse, or something like that. Very rude. I think that’s something you shouldn’t say to any rider in front of the others, and certainly not to a five-time world champion.

“I think that today God picked him up and said, ‘Today isn’t the day you get hurt’. It was a similar crash to the one [Marc] Marquez had at Mugello in 2013. It gave him [Miller] a warning that MotoGP is no joke. It’s now up to him if he takes this advice onboard or not.

“In my opinion, [Miller] is one of the riders that that doesn’t pay enough attention to the risk involved.”

You can read the full quote here.

The English language can be tricky to master. It’s littered with bizarre conjugations and spellings. Also, many of us, myself included, just have trouble spelling certain words. (Mine is unfortunately. I’ve been stumping Word for years and have to resort to Google.) The Scripps National Spelling Bee, where eight and nine year olds make the rest of us look like idiots, is this week and Google Trends decided to release a map of “America’s most misspelled words,” and I must say, some of these are absolutely ridiculous. Some can be tricky (pneumonia, hallelujah, sauerkraut), but c’mon, how do you not know how to spell Europe for goodness sake. Or liar. Or banana. This is awful. Also, a tip of the hat to the good people of Wisconsin for misspelling Wisconsin....

This Is Straight Out of a Marvel Movie or Something

Okay, maybe not the “best race” you’ll see all year, but it's damn near close. This incredible race from the Speedway World Championships in Warsaw is worth watching over and over and over again.

I Have No Idea How He Lands This

MotoAmerica announced recently that they’ve seen record high audiences on the beIN SPORTS network in 2017. According to the announcement, they are up 54 percent over 2016 through three rounds. The series also says they've seen a 43 percent growth across MotoAmerica’s social media channels since last season.

“This is great news,” said MotoAmerica president Wayne Rainey. “Our racing has been incredible and our partners at beIN SPORTS do a great job at every round capturing that racing and producing a show that is second to none. It’s nice to see our audience grow at this sort of rate. This is great news for all of us at MotoAmerica and beIN SPORTS, and for our riders, teams, sponsorship partners and fans.

“The growth in our social media is a really good sign. It shows that the hard work is paying off and that our fans like what we’re doing. Social media is the perfect way to keep our fans informed on our series, our riders, teams, sponsors and everybody else who makes MotoAmerica what it is.”

The press released did not provide any further numbers, so it's hard to compare the ratings against anything, but good to see road racing maybe catching back on here in the States. You can read the entire press release here.

Legends of the Road Remember Hayden

Later this year, racing legends David Bailey, Jeff Ward, Doug Henry, and Micky Dymond will compete in the Race Across America (RAMM), dubbed the “world’s toughest bicycle race,” which runs from California to Maryland. The team, named Legends of the Road, is raising money for the Road 2 Recovery foundation. You can donate here. If you’d like to read more about it, we’ve spoke with all four members of the team, as well as R2R’s Jimmy Button. Last week, after the tragic passing of Nicky Hayden, the team spoke about their encounters with the 2006 MotoGP world champion. It’s touching.

Whiplo 3 is a Must Watch

We’ve featured the Whiplo movies in the past, and they are pretty awesome. Made without budget or professional riders, the Swedish motocross movie makes you want to get out and ride with friends. Enjoy the movie directed by Niklas Nilsson.