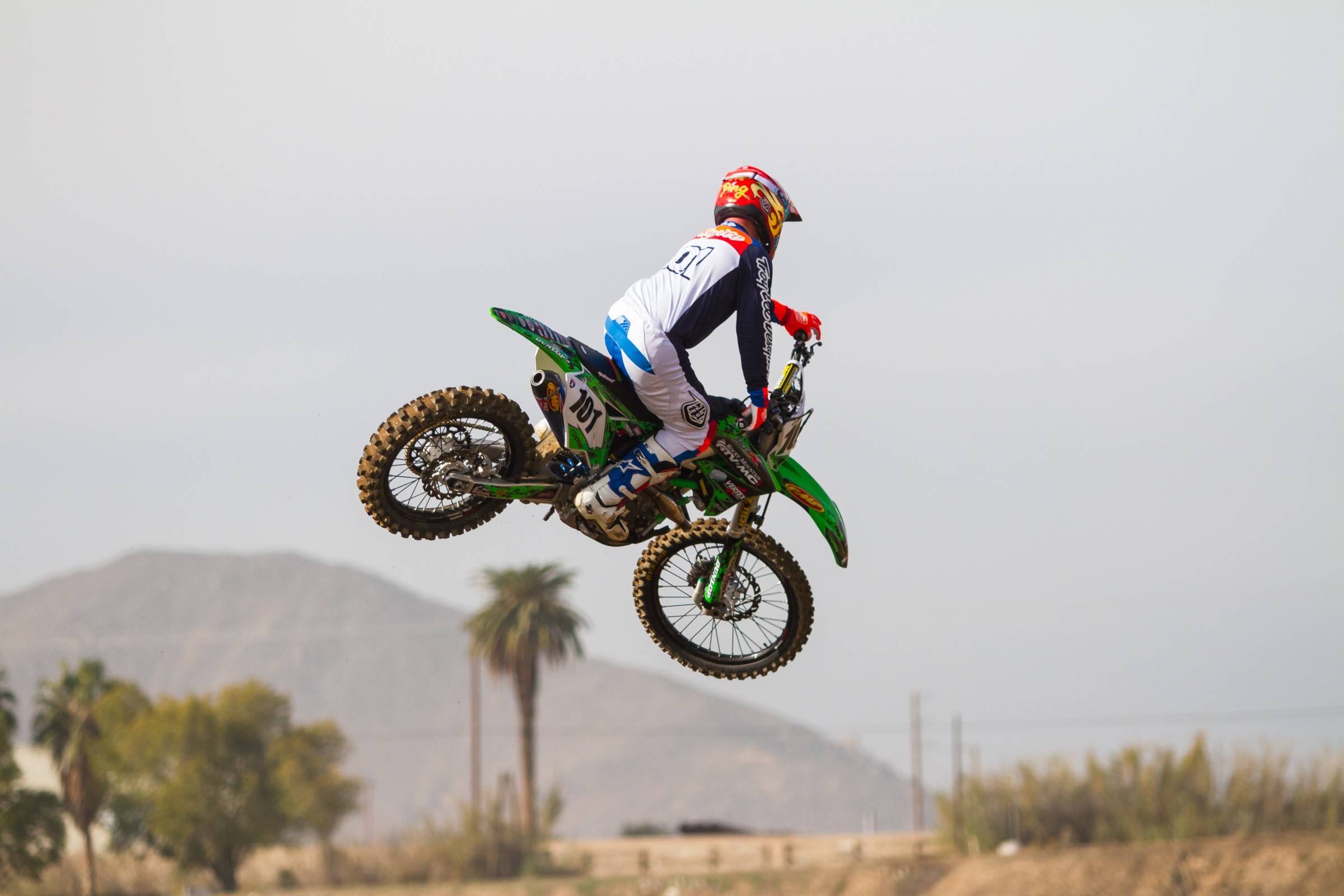 Why wouldn’t Jeremy Martin skip up to the 450 class? After his display at Daytona Supercross I would think Honda would have the only weapon against Eli? May be Marvin will come into play later in the season? Anyway, what keeps riders like Jeremy in the 250 class? Wouldn’t they want to move up the ranks as soon as they can? Is a 250 championship worth more than a 450? What are your thoughts?

I know in our world (Snowmobiles), the Pro Open is the Premier class and the others are supported because someday they will move up the ranks. They are not covered nearly as much as the 250 moto class.

The 450 class is the premier class in MX/SX racing, but there are team and sponsor obligations you have to consider. After Jeremy’s ride in Daytona I’m sure the Honda brass gave plenty of thought to move Martin up to the 450 full-time for the summer. After all, he’s already won the 250 title twice and he can obviously haul the mail on the big bike. Makes sense, right? The problem is that the GEICO Honda team, Honda’s factory 250 effort, negotiated their contracts with sponsors based on which riders they would have for the season; you can’t just steal their marquee rider. If Honda would have let him move under the awning with his GEICO graphics and gear, maybe they could have compromised, but it obviously didn’t work out. Martin’s current GEICO Honda deal is for two years with a guaranteed 450 spot for next year to ride a GEICO Honda 450 under Honda HRC tent, so he will get his chance soon enough.

Hope you are doing well! My question for you came from watching Round 1 of the Lucas Oil Pro Motocross series last weekend with my family. After seeing Dylan Ferrandis take a nasty fall in the first moto, everyone watching with me could tell that he didn't seem to be "all there" when he got up from the crash. This made me wonder about concussions (which he turns out to have suffered) in SX/MX. In other sports, if a guy takes a big hit, usually play will stop and medical staff can quickly check for concussion symptoms and do some sort of evaluation. However, in SX/MX, if a guy takes a big fall like Ferrandis did, and say there's 15 minutes left in the race and the guy gets back up to finish, there's not really a way to quickly check for a head injury unless he takes himself out of the race. With all the information we know now about how dangerous concussions could be, what could be an answer to this? I can see maybe flagging a rider down if it's VERY obvious that his riding is being affected by a hit to the head, but what could you potentially do if it's not all that obvious other than wait for the guy to pull off the track after the checkers? I'm not saying this is a problem or anything in pro MX/SX, but it was just something I thought of and wanted to hear your opinion on.

Thank you for the time,
Jake/SmithJ120

It’s a good question, Jake, and one that doesn’t have a clear-cut answer in pro racing. When I go on a trauma call with the fire department we have a series of questions and an assessment protocol we run through. Is the patient altered (person, place, time, and event)? Are their pupils equal and reactive? Are their questions repetitive? How significant was the mechanism of injury? It’s pretty straight forward. But when a rider goes down they are typically scrambling frantically to get back on their bike like it’s the last helicopter out of Vietnam. Unless they are knocked out or completely disoriented, they won’t stay put long enough for you to go through even a basic assessment. That makes it difficult on the infield of the track. Crews will run up and ask a couple questions, try to get a look at their eyes and come up with a general impression in a few quick seconds. It’s not easy and certainly not thorough. You suggest using flaggers as some sort of medical authority but, look, these guys have a full plate just holding a yellow flag sometimes. There are some great flaggers out there who are really on top of their game, but there are others who couldn’t find their ass with both hands. Let’s not add medical authority to their list of responsibilities just yet.

The past few years have been great for racing, but especially this year. This year we saw Tomac finally get back to the speed he had on Honda, whether it be the simple geometry changes he made or mental changes or both, we finally saw the speed we all knew he had. My question comes to you from a different perspective not asked often: I see it asked often about comparing a current racer to a past racer like Tomac to Carmichael or Stewart, etc.  What's your opinion on if Roczen had not gotten hurt? I know it's just an opinion, but your opinions are always those of incite, knowledge, and a little comedy. Who would YOUR money have been on for supercross had he not gotten hurt? Maybe he would have won the championship on the points he won early on but do you think Tomac could have mounted the same comeback against Roczen and beaten Roczen heads up in most races or do you think Roczen was on a level above Tomac? Who would your money be on this motocross season had Roczen not gotten hurt?

P.S. If we are comparing to the past, who would your money be on if we added Villopoto to the mix?

I know speculating about things like that makes for good bench racing when you’re hammering back a 12 pack of cold beers with your buddies. But the fact is the only champion is the guy with the number one plate. Ken Roczen couldn’t have won the title because Ryan Dungey did. And Roczen can’t/won’t win this summer because he’s not racing. I have a long list of races and titles I should have won if certain crashes didn’t happen and certain bikes didn’t snap in half … but they did, and I’m nowhere to be found in the record books as a result. So while playing what if and trying to mesh different eras together to decide who is better is a fun game, it’s about as pragmatic as riding a unicorn to work. I am honestly hoping that Roczen makes a full recovery and we get to see him riding the way he was at the beginning of this season again. If he does, I’m sure he and Eli will have some epic battles. Until that happens though, the what ifs are just verbal masturbation without the happy ending.

P.S. Really? If we’re doing this then I’ll take Santa Claus for the win.