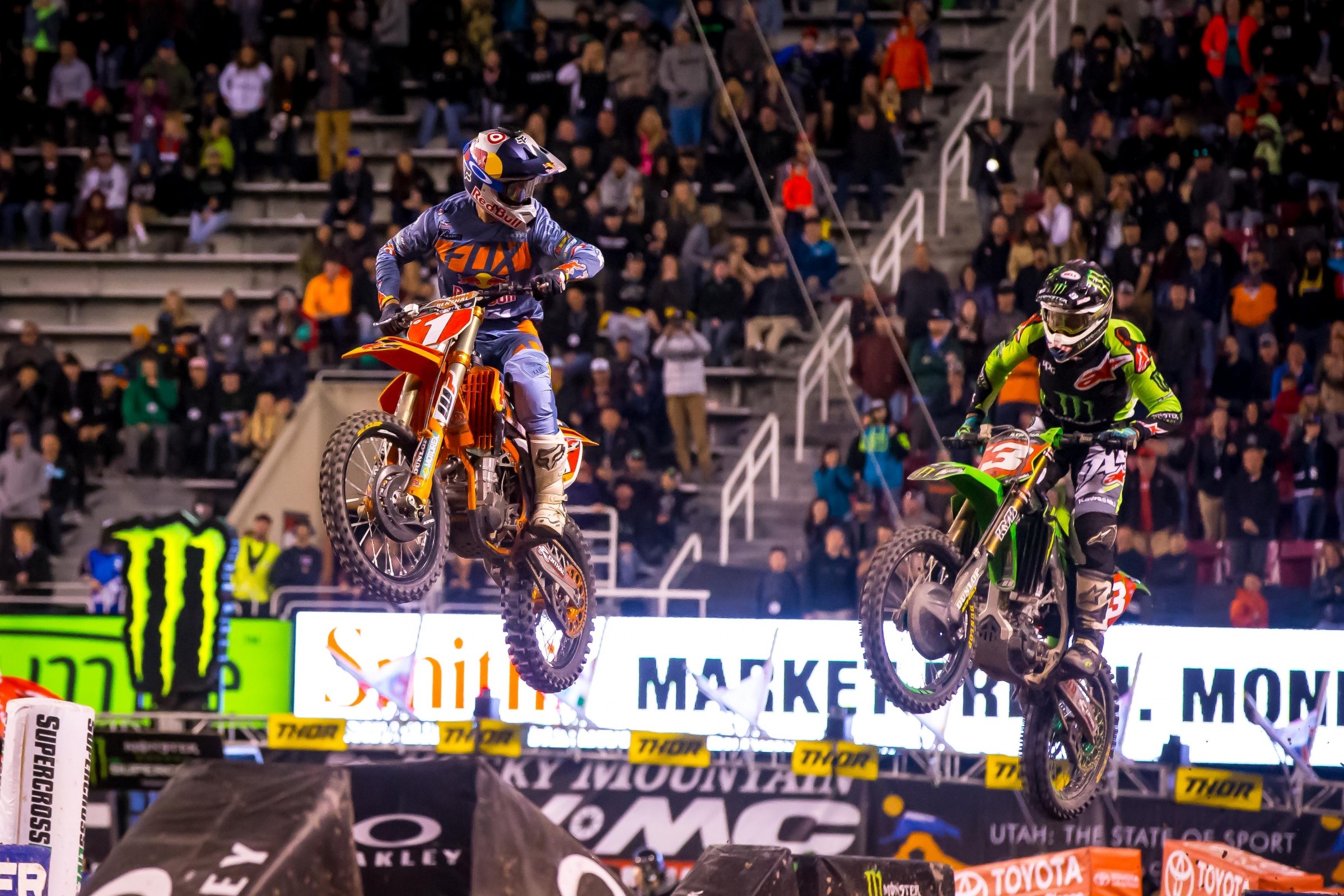 A historian studying the midway points of the 2015, 2016, and 2017 supercross seasons might think Ryan Dungey put together a three-peat of remarkably similar seasons. He took control in the first half of the season, extended his points lead to 20 or more and continued to control the field all the way to Las Vegas. In fact, the 2015 and 2016 seasons would be sealed early with a championship plate handed out in the weeks leading up to the desert finale. Everything was setting up for 2017 to be exactly the same dynamic as we left Atlanta on February 25.

Dungey won again, and pushed the points lead to 27 over Eli Tomac and while reminding everyone of how he puts a strangle hold on championship points. That Saturday night would be the last time we would feel that inevitability of another title, though. Tomac was ready to rewrite the script but to do it, he would have to simply dominate Dungey down the stretch. So far, that’s exactly what he’s done.

Last weekend’s ride in Salt Lake City was one to remember. I have to admit I gave Tomac little to no chance of catching Dungey on that opening lap. He was in the back of the pack, being pushed around by Marvin Musquin, and generally was in disaster management mode. Meanwhile, Dungey was out front and doing exactly what he has done for the last two and a half seasons. It’s his tried and true recipe for success. Get a top-three start, move aggressively to the lead on the first lap, put in six to 10 sprint laps to build a comfortable gap, and manage the race to the checkers.

It’s the same recipe that Aldon Baker instilled into Ricky Carmichael, James Stewart, and Ryan Villopoto well before Dungey used it in 2015 and 2016. True to form, he was putting this to use on Saturday night as well. He nailed the start, got to the front on the first lap, and built a gap. For everyone who has watched this same scenario over and over, it was almost a foregone conclusion on lap three that he would be the main event winner. It’s just what we have come to expect. In fact, even Tomac made mention that he assumed second place was his best hope after such a horrific opening lap.

Unfortunately for Dungey and his 2017 points lead, Tomac is simply a different animal this year. This version of Tomac seemingly has no ceiling. He is impervious to Dungey’s tactic of run-and-hide. His edge in speed negated any lead that Dungey could build in the early laps last Saturday. In Dungey’s heart of hearts, I believe he was very confident that he would win that main event as we entered lap three or four. He had a comfortable lead, couldn’t really see Tomac anywhere as of yet, and had his training partner Jason Anderson riding shotgun in second place.

After all, why wouldn’t he be confident? He has run this play over and over with huge success. To assume Tomac would be two seconds a lap better in a seven-second segment (the whoops) would be too silly to even contemplate. Even now, if we didn’t know it actually happened, we would never think that he could reel Dungey in from so far back. It’s such a historical improbability; Dungey simply doesn’t let people erase his lead. His race execution has always been so robotic in its perfection. He doesn’t make mistakes. He doesn’t give anyone an inch to breathe. Put simply, if you let Dungey get the lead, it’s the end of the suspense.

That’s what changed this year. Dungey did what Dungey does. He executed his plan perfectly, and in any other year, the story leaving Salt Lake City would have been, “Ryan won the main event and was never even challenged. He extended his points lead and onwards we move to New Jersey.” Unfortunately for him and Red Bull KTM, Tomac has finally arrived and has the answers to usurp Ryan’s tried and true playbook. That may be the scariest part of this whole season for anyone not named Eli Tomac. The plan that has been nearly infallible has finally been foiled. Eli and co. finally solved Aldon’s cube.

We saw glimpses of it in the summer of 2015, but Eli’s next level speed has finally arrived in supercross. We still have two races left to run and the gap is only three points. That’s important to remember because racing can flip in one fluke crash. Tomac hasn’t won anything just yet, but just like Ken Roczen was able to do in the first two rounds, he has found the weak spot in Dungey’s armor. Dungey has his work cut out for him in the last 40 minutes of main event racing. Tomac has figured out how to overcome a seemingly foolproof strategy that’s won title after title.

The big question with two rounds left is simple: Can Dungey find the speed needed to respond? Nothing else will do.