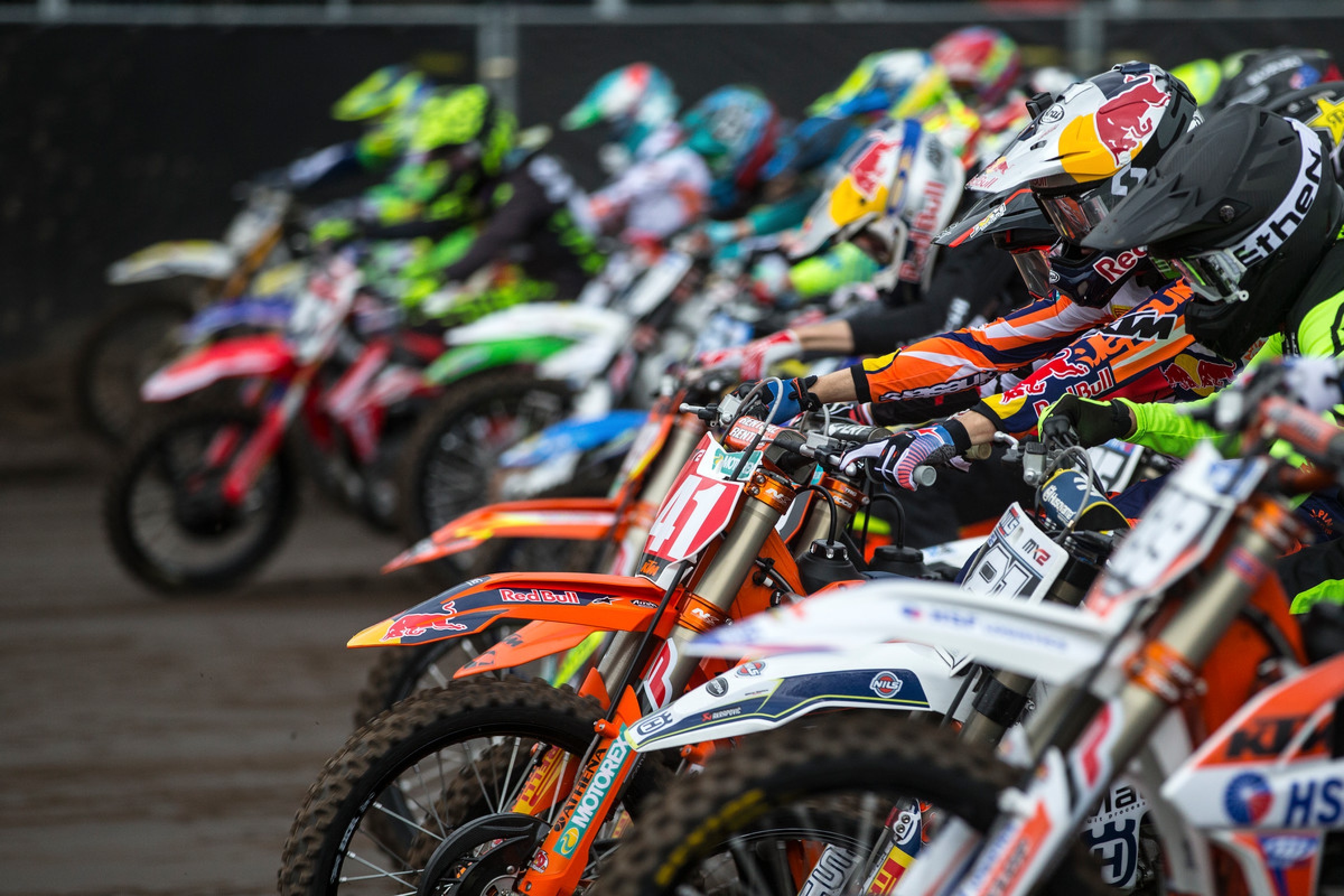 Four winners from six rounds of 2017 MXGP and a week after Antonio Cairoli reminded the international motorcycle racing community of his brilliance in Italy, the FIM Motocross World Championship served up another delicious treat for motocross followers. The Grand Prix of Europe (so called as the Assen circuit claim the rights to the GP of the Netherlands) landed in Valkenswaard and the shallow, rippling sand once again proved deceptive with its hard base, squirrelly edges, and propensity to roughen in double-time. A last cold wintery blast of breeze had the majority of the vast attendance reaching for hats and scarfs, but hot to the point of sizzling were the likes of Rockstar Energy/IceOne Husqvarna’s Gautier Paulin, Red Bull KTM’s Cairoli and Pauls Jonass (a third sweep of MX2 this year) and Valkenswaard’s darling Jeffrey Herlings.

Paulin last tasted winner’s champagne at the very same venue in 2015. But 2016 on the whole was a mysterious and miserable experience for the 27-year-old Frenchman as he waded through the last term of an unbeneficial union with HRC, dealing with injury (a fractured vertebra) and shaken confidence, all the while maintaining a dignified silence to the extent of his troubles. Paulin has now rediscovered his delectable style and verve and is revelling in the deep well of technical and moral support provided by Antti Pyrhonen and his Belgium-based crew (owner and F1 driver Kimi Raikkonen was looking on at Valkenswaard). His link with the FC450 is proving effective. His 1-2 scorecard marked a second podium appearance of the year (the overall victory with his fourth different manufacturer in MXGP and fifth factory team). It was an emotional and hard-fought result.

Paulin took the holeshot in the first moto along a start section that had been modified back to its original design (forged when the bikes were not as quick) and several protagonists commented on the ferocious nature of the approach.

“It is third-fourth gear flat-out to the straight and then you get the big bumps. It was not an improvement,” voiced Herlings.

But it sure was exciting.

The only stable aspect of the opening race was the eventual winner. Paulin led and did well not to look behind him. Romain Febvre—still on a search for form and a mental lift in 2017—stalled his way out of fifth place, points leader Tim Gajser crashed out of top-five contention, Suzuki’s Arminas Jasikonis finally created momentum in his first season as a factory rider, HRC’s Evgeny Bobryshev ran out of steam and Jeffrey Herlings clawed back some confidence with every passing lap. The top five riders were split by five seconds for the most part and it was gripping viewing.

Paulin’s penultimate lap was strong enough to defy Monster Energy Yamaha Jeremy Van Horebeek’s late challenge and Herlings tried a bold move for second spot but ran off the track and gave his former teammate room to look ahead. Further back there was no repeat heroics for the terror of Trentino, as Cairoli got a bad start and was then held-up by the falling Arnaud Tonus. To hinder his charge he then had a goggle issue that forced him to slow while behind his teammate Coldenhoff and Max Nagl.

Cairoli shook his head as he motored back to the pits with a ninth place. An irritated right eye was cause enough to exercise caution and the complaint did not clear up completely for the second moto. However the 31-year-old grabbed the holeshot he was craving and then in his wonderfully effortless, lackadaisical but unmatchable way in the sand (all torquey throttle squirts and expert use of the terrain for full flow) he pulled out a lead over Bobryshev that he duly converted to 25 points and a four point gain over Gajser. The war for second place was again the highlight and as Bobryshev uncharacteristically withered with Van Horebeek as well easing off due to stomach cramps, it was Herlings who roused the crowd in his pursuit of Paulin.

The former MX2 World Champion had cited Valkenswaard as an indicator as to whether his maiden MXGP term would actually get off the ground or not, and on this evidence he can be happy. The seven-year streak of success at Valkenswaard had gone but second place could be the touch-paper turning orange for the sometimes-fragile Dutchman.

“I felt like we were close to the win,” he exhaled. “We almost made it happen and from where I have come from second feels almost like a win. All those guys are so good. I don't want to be disrespectful to the MX2 guys but when I passed them I’d be gone, but these guys fight back…. But that is good and I think there was some great racing today which is good for the fans and for the sport. It has been a good day.”

The day belonged to Paulin however; Husqvarna’s second different winner since their re-introduction to MXGP three seasons ago.

Two mistakes counted sand master Wilvo Yamaha’s Shaun Simpson out of the top 10 while KTM’s Glenn Coldenhoff rued indifferent starts (as did Paulin’s teammate, Nagl). Gajser said that he was actually quite pleased with his top-five result that represented only the second time the Slovenian has missed the box in 2017. Twenty-year-old rookie, the lofty Jasikonis, gave Stefan Everts and his Suzuki crew reason for cheer while there was bad news for Kevin Strijbos who is likely to require an operation on his right elbow and a spell on the sidelines. An injured ankle kept Max Anstie in civilian dress and another Brit, Jake Nicholls, was sadly absent after dislocating his hip in Italy last week without even crashing.

With Marc de Reuver as coach and mentor for 2017, Pauls Jonass would have been copping some abuse from the charismatic Dutchman if their hours of work and training through the winter (mainly in Benelux sand) had not converted to spoils on the former’s hunting ground. Jonass was superb. There was no disputing the MX2 winner as the 20-year-old pulled away from his rivals and sets up a tantalising home Grand Prix in Latvia in two weeks time where he is hero worshipped and has been known to frequent the airwaves of national news broadcasts.

Trentino victor and Red Bull KTM teammate Jorge Prado suffered two big crashes while cresting the same jump in both motos. The Spaniard dropped from fourth to last and pulled back to 17th in the first sprint, but was extremely lucky not to clatter into the fence and the public after holeshotting the second race. The teenager was unhurt but four points was a reverse of the speed and form shown in Italy.

Suzuki’s Jeremy Seewer limited some of the damage to Jonass in the championship by running to second and Kemea Yamaha were thrilled to welcome Brent Van doninck’s second career podium in what was a display of strong riding by the often luckless Belgian. Monster Energy DRT Kawasaki’s Darian Sanaeyi ran in the top four in the opening stage of the second moto but the GP rookie could not sustain the pace while Rockstar Energy Husqvarna’s Thomas Covington could have eyed another podium finish in Holland if a fast second moto dismount hadn’t bent his handlebars and forced a DNF. There was concern for LRT KTM’s Julien Lieber who had kept Jonass company in the first moto, but pulled out early in the second with a suspected knee injury. No word on the seriousness of the problem was forthcoming Sunday evening.

MXGP can now pause for a week and before the long drive east to Kegums—a staple part of the Grand Prix calendar for almost 10 years now as host of the Latvian stop on the trail.