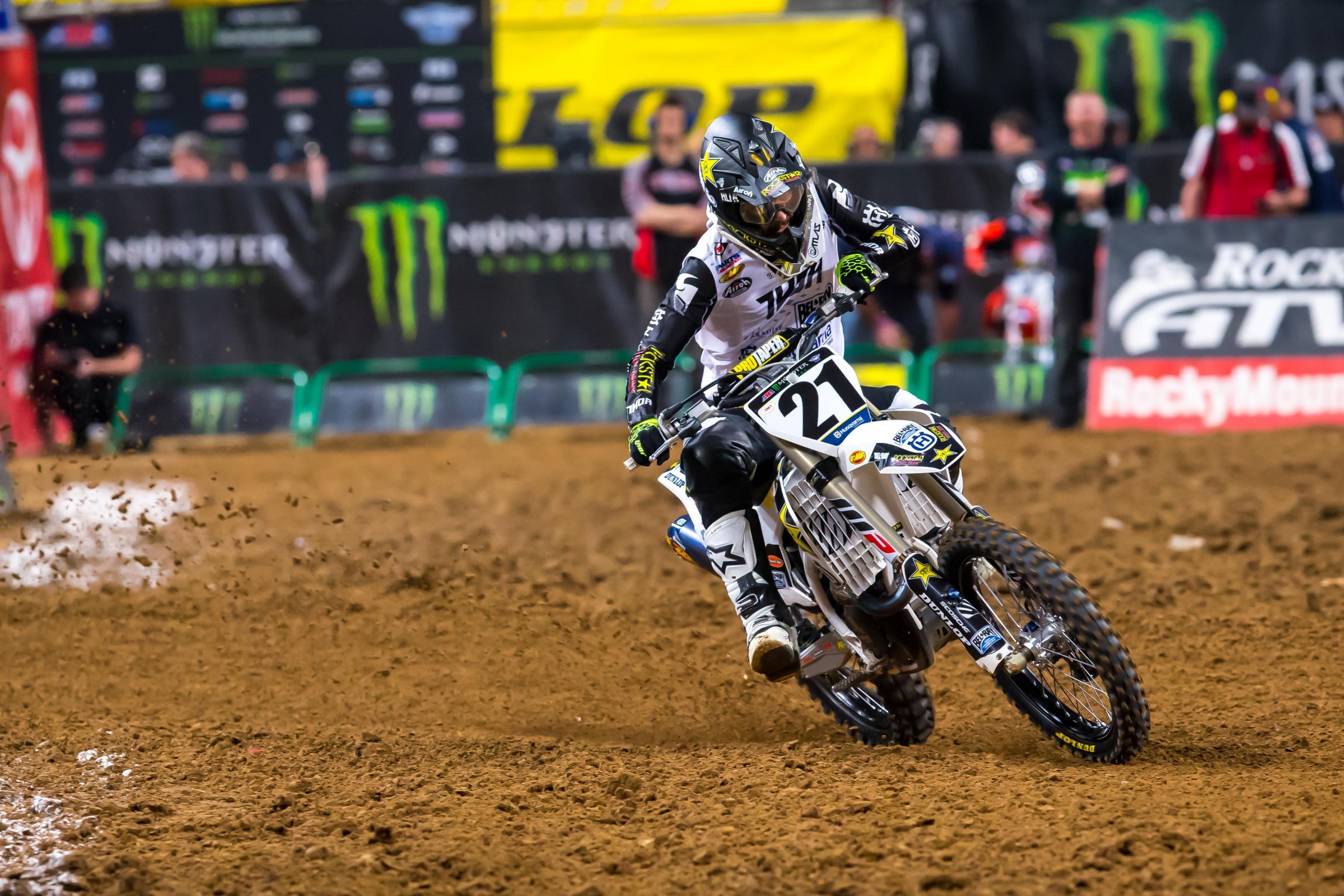 Thanks to a 294-294-point tie, Eli Tomac and Ryan Dungey will both be sporting red number plates this weekend, and unless both of them fail to qualify, or they both finish 20th or worse, only one of them is going to leave Salt Lake City with the points lead. Dungey’s had it since Glendale, but Tomac’s been on fire lately, winning eight of the last 11 races. When the checkers fly on Saturday one of these two superstars is going to be a step closer to the championship than the other. Who will it be? –Aaron Hansel

POLL: Who leaves SLC with the red plate?

Cooper Webb officially finished eighth in Seattle, but for most of the race he was much better than that. The 450SX rookie was fastest in practice, won his heat, and battled for a spot on the podium for most of the race, even fending off Tomac before eventually going down. Webb was heating up before getting hurt in Minneapolis, and now it seems he’s getting hot again. If he brings that same speed to Salt Lake City he could have an impact on the championship fight. –Hansel

Plenty of talk the last few weeks about team orders at Red Bull KTM, but very little, if any, evidence of it on the track. But with Dungey and Tomac tied with just three races remaining, you can’t help but wonder what might happen if Dungey finds himself knocking on Marvin Musquin’s door in the main event. We’ve seen teammates help each other out in the past—Webb letting Jeremy Martin by at the Utah National comes to mind—and if they’re not battling for a win, it wouldn’t be that surprising to see something similar play out if Dungey and Musquin find each other this weekend. And don’t forget, Josh Grant returns from injury this weekend so Tomac will also have some potential help on the track as well. -Hansel

Martin Davalos has been racing the 250SX Class since 2006, but what happens in Salt Lake City might determine whether or not he’ll be eligible to race another year of 250SX in 2018. Davalos is 11 points short of pointing out of the class, which means that if he finishes 10th or better on Saturday night his run in the 250SX Class is over after this season. Davalos’ worst result of the year so far is a seventh, so unless he crashes out or has mechanical problems, he should cross the line of advancement on Saturday. –Hansel

Two in a Row

Although he’s second in points and has a stack of podiums so far this season, Aaron Plessinger hadn’t won a supercross since Indianapolis in 2016. That changed in Seattle, where Plessinger was fantastic on a track that broke down faster than a ’76 Gremlin. Finally checking that box has got to boost Plessinger’s confidence coming into Salt Lake City—we’ll see if he makes it two in a row in Rice-Eccles Stadium. –Hansel

With Honda HRC without its top two riders, GEICO Honda’s Christian Craig will fill-in for the team this weekend. It isn’t the first time, and certainly won’t be the last, a 250 rider has moved up to the bigger bike. In fact, the rider Craig is filling-in for, Cole Seely, rode 450SX three separate times during his 250 career. Seely rode for HRC in 2011, 2012, and 2014, with his best result a podium at Indianapolis in 2014. Craig, who will fill-in for Ken Roczen in Lucas Oil Pro Motocross, has only ridden 450SX at the Monster Energy Cup. With limited time on the bike there aren’t huge expectations going into the weekend, but it will be beneficial for Craig to get some experience on a 450 in supercross. –Chase Stallo

Quick, who finished on the podium Seattle? If you said Marvin Musquin, Eli Tomac, and Ryan Dungey, well, you’d be wrong. With much—hell, probably all—attention focused on now co-points leaders Tomac and Dungey’s frantic rides through the field, Jason Anderson’s third place finish got lost. It was an important podium for Anderson—who has just three on the season and no wins. This weekend will mark a homecoming for the New Mexico native, as he grabbed his first career 250SX win in Salt Lake City in 2013 (he finished runner-up in 2012). Can he snatch his first victory of 2017 this Saturday? -Stallo

The Bear is Back

Eighty-four days after fracturing his femur in Glendale, 51FIFTY Energy Drink Yamaha’s Tyler Bowers will return to Monster Energy Supercross this Saturday. Prior to his injury, Bowers wasn’t very Bear-like, finishing 11-11-8 at the first three rounds of the championship. Bowers has yet to announce an official deal for next year, so these next two rounds could play an important role in negotiations. We’ll see how he does in his first race back. -Stallo

The Rookie is Back

Sidelined due to a sore right hip in Seattle, Monster Energy/Pro Circuit Kawasaki rookie Austin Forkner will return to racing this weekend. Forkner hasn’t raced a supercross event in more than two months—due to the West Region’s seven week break—but was riding a hot streak prior, capturing his first career podiums in Glendale (third) and Oakland (second). We’ll see how the long layoff affects the young star this weekend. -Stallo

The Veteran is Back

Prior to missing Seattle due to a crash in qualifying (Grant said he “rang his bell a little” in the crash) Monster Energy Kawasaki’s Josh Grant scored a season-high finish of fifth in St. Louis. Grant has only raced in Salt Lake City twice in his career (2009 and 2012), but he has had some success, finishing sixth in 2009 and eighth in 2012. Can he pick up where he left off in St. Louis? -Stallo