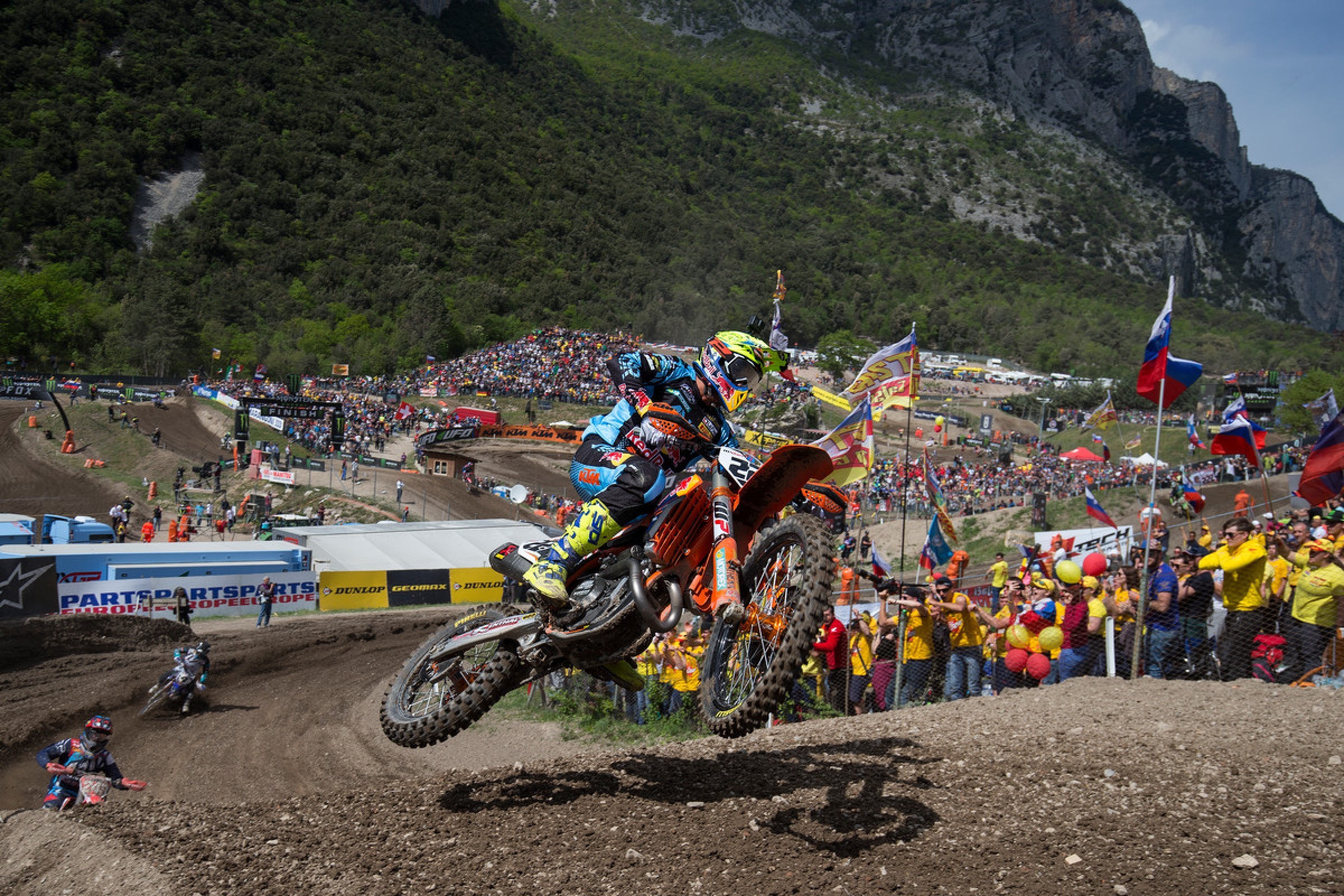 Antonio Cairoli needed to make a statement and the first of two home Grand Prix events in 2017 was an apt time to do so. The eight-time world champion had successfully converted pre-season pomp into success at the opening round in Qatar, but—for one reason or another—had only made the podium on one other occasion: two weeks ago in Mexico. Around the tight and twisty Pietramurata hard-pack and undoubtedly one of the most picturesque motocross circuits on the 19 round FIM World Motocross Championship calendar thanks to its location in the heart of the Dolomite mountain range and close to Lake Garda, Cairoli unveiled a masterpiece for his 79th career victory and second of 2017.

Round five brought MXGP to familiar European climes and to the squeeze of the Arco di Trento site. The paddock assembled in full display for the first time this season and European fans packed the enclosures with world champion Tim Gajser’s ever expanding army of yellow Slovenian followers making the relatively short trip over the border to accompany a wealth of Italians feeding on Cairoli’s revival after his tough year in 2016.

Pole position and a formulaic first moto in cloudy but warm conditions (only Gajser produced the sole position change in the top five by dropping from second to third due to arm-pump) fell to the rampant Red Bull KTM man, largely thanks to some stunning starting prowess that was very much a hallmark across the class for the Austrians. The common quibble throughout the weekend and for the last half a decade of Grand Prix events at Pietramurata revolved around the difficulty for passing.

Rockstar Energy Husqvarna’s Thomas Covington—a winner in MX2 in Mexico and fifth overall in Italy after the shackle of a first moto crash—described the challenge. “The track is kinda slippery and you just slide into the main line everywhere. If you try something else then it is too slow; you just have to run something up the inside and hope. It is hard to make a clean pass out there! To me this is a typical old-school European hard-pack track.”

Cairoli subverted the notion of the majority of his peers in a second moto that was nothing short of stunning. The 31-year-old instigated an almost audible groan across the entire site when he was one of several riders boxed in and dumped on the floor of the impossibly tight first-turn S section. The lack of passing among the leaders in the first moto and the fact that lap-times were so tight—1.5 seconds splitting the top 11 in timed practice and the calibre of rider such as Jeffrey Herlings, Glenn Coldenhoff, Shaun Simpson, Kevin Strijbos, and Max Nagl were all struggling to find the top 10—meant Cairoli’s chances nose-dived in an instant. What followed was a 29 minute and two lap showcase of mastery and bravery with a dash of inspiration and a hint of desperation. The way Cairoli used the 90-degree lefthander at the top of the step-up to block pass his way past at least five riders on five different laps showed a superiority that is increasingly rare in an MXGP pool that deepens every year. It was reminiscent of Stefan Everts’ cheeky passing spot on the steep drop at Namur, Belgium, (a track virtually notorious for overtaking) in 2005 that drew the Yamaha man to an unexpected but wholly typical win.

Cairoli passed the solid Evgeny Bobryshev for second position on the last lap and Pietramurata lost it as fans rushed the start straight for the kind of celebration normally witnessed at the Motocross of Nations with an emphasis split for Cairoli and a large faction for Gajser but a general feeling that everybody had observed something special.

“I think this is one of my best races, best GPs ever. One of the most emotional,” Cairoli articulated afterwards. “When you crash on the first corner and you are hoping to win the GP … most people know it is almost impossible—even myself. When I crashed I was like ‘BEEP!’ but slowly found the place to pass and could think about being on the box. I gave everything in the last 10 minutes.

“There was pretty much the only one to block-pass while being safe,” he added. “It was the only one I found and it worked. It is difficult at this track and at the beginning of the race with the slower riders going left and right but afterwards it was fun and I’m happy the fans also liked it.”

Much has been made of Cairoli’s age and the fact he is battling rivals often a decade younger and that he also finished second in an injury-disturbed 2016 season he frequently dubs as the “worst of my career”. There is plenty to indicate #222 is motivated and capable and the Trentino Grand Prix was an excellent stage for this lead actor. “[Performances] like this mean you are fit and motivated,” he explained. “Last year I was giving up in some races and I wouldn't have done that in the past; it was difficult mentally because I couldn't express myself like I want. I obviously feel better so I’m really happy.”

Cairoli gathered headlines again and created some powerful memories once more—and boy did the KTM crew celebrate their achievements in the post-race aftermath of elation and well-wishing—but in the bigger picture Gajser deserves credit for also turning around a lacklustre first moto to claim the flag in the second and minimise the championship damage to just two points over his older peer. Gajser also had a copious following on the spectator banks and delivered at the location where he scored his very first GP win only two seasons previously.

Riding strongly after a personal best in Mexico and enjoying the starts needed to be among the protagonists, Wilvo Yamaha’s Arnaud Tonus made the third step of the podium. The Swiss kept Cairoli in a higher gear in the first moto with an impressive and smooth run to second place. Even from Saturday’s opening laps it was clear that Trentino would again be a singular type of motocross where the start paid dividends and only rider error could shake up a race order; for this Tonus’ application and fast-learning deserves credit. The other noteworthy result amongst the bunch was a fourth for Jeffrey Herlings, the Dutchman finally nailing a launch out of the gate and visibly sucking in the cleaner air at the front of the pack as opposed to the suffocation of roost mid-pack and lower down. The MX2 world champion admits his home Grand Prix at Valkenswaard and in the sand this coming weekend is very much a crucial gauge for how he can fare on the 450 this season. He has dominated the event there for the last seven years in MX2.

The rest of KTM’s joviality was provided in MX2 with teammates Pauls Jonass and Jorge Prado sharing holeshots, wins, billing, and almost track space in another 1-2, 2-1 duel that this time fell in favour of the emotional and fresh-faced 16-year-old. Still in school, Prado is really blossoming in just his second year riding a 250 and has a start technique and feeling for the bike that is almost unbeatable. He is stylishly raw. By surviving some skirmishes with backmarkers and a closing Jonass in a final tense five minutes of the second moto Prado became not only the first Spaniard to win in the MX2 class but also the first from his country to own a GP victory since Jonathan Barragan in 2009—making him only the second ever in the FIM World Motocross Championship.

Jonass is still the only rider with more than one win this year but was satisfied to regain the red plate from Suzuki’s Jeremy Seewer who was mostly undone by a ninth place finish in the first moto. Covington, who had been thoroughly demoralised by the rough Italian hard-pack in previous years, carried the form and edge of a recent winner and was sprightly all day, was another ruing a poor early result due to a tumble and dropping from seventh to 11th. The American was resolute at the second attempt and flew to third despite a controversial moment with privateer Julien Lieber that also involved teammate Thomas Kjer Olsen and left the Belgian seething that he’d been “taken out by two Husqvarnas”. Lieber remounted quickly to snare his third podium spot of the campaign and remains an outside hoverer in the early title chase—and was yet another KTM/Austrian-motorcycle mounted rider in a busy top five.

Kiara Fontanesi triumphed through two unpredictable WMX motos and Simone Furlotti aced the opening chapter of the European EMX250 Championship as Pietramurata filled to capacity and then some in terms of logistics. MXGP will be able to count on another busy and vibrant event with the Grand Prix of Europe at Valkenswaard and just south of Eindhoven this coming weekend for round six.