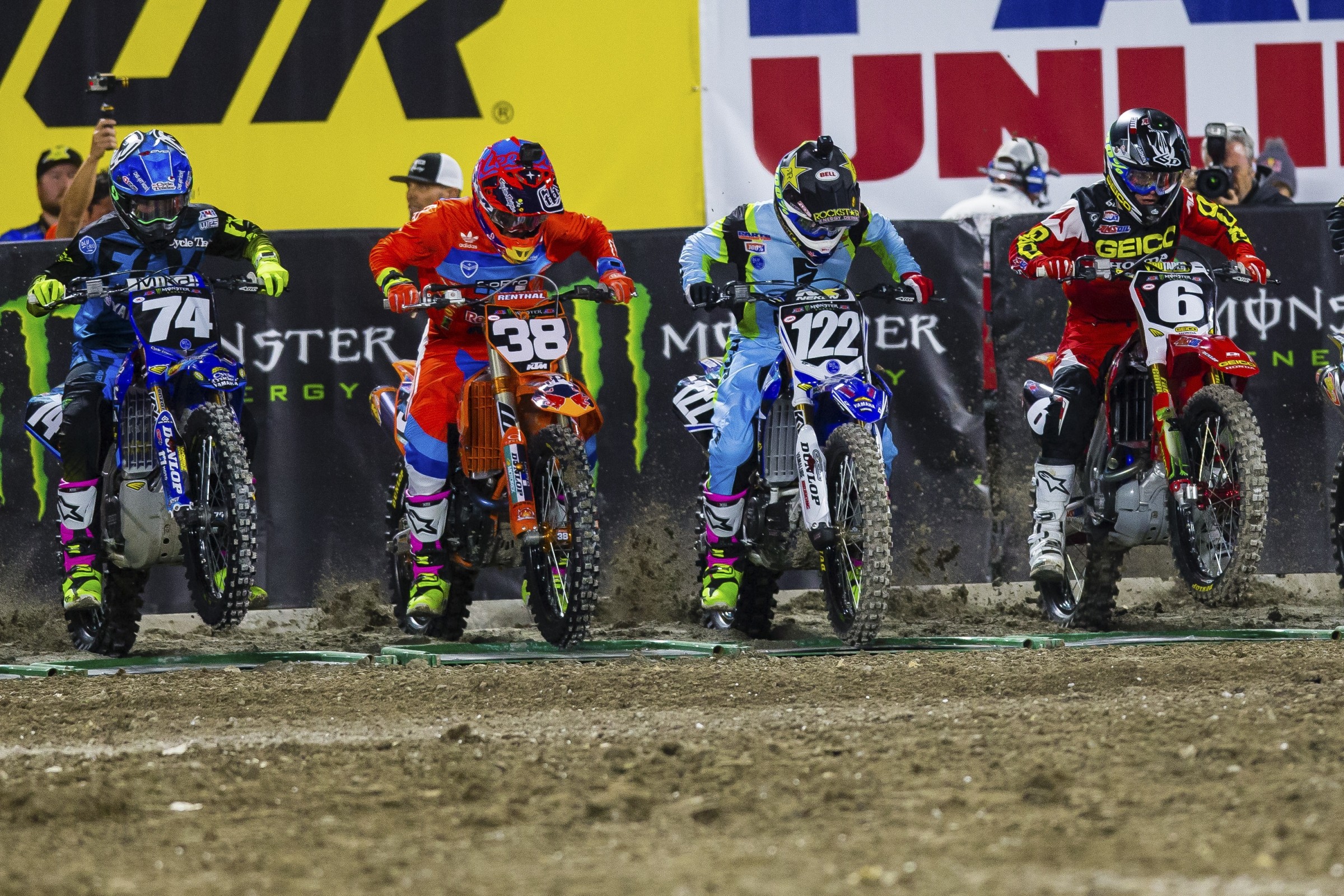 Fifty-three days ago, the 250SX West Region was turned on its head. Shane McElrath, winner of the opening two rounds, was en route to retaking the points lead from Justin Hill, who had just rattled off three consecutive wins. But, with just a few laps remaining in Arlington, McElrath experienced a bike problem and had to retire from the race. Hill went on to win, and now holds a 21-point lead over Aaron Plessinger with three rounds remaining.

With the series on break the last seven weeks, you’ve probably forgotten all about it. We’re here to help with this simple guide as the West returns this weekend in Seattle for Round 7 (of 9).

Days between races of the 250SX West Region. The West last raced in Arlington, Texas, on February 11.

GEICO Honda’s Jimmy Decotis had consecutive fourth place finishes prior to the break.

Consecutive wins by Hill prior to the break. Hill’s four wins are the most in the class.

Average finish for Hill through six rounds of the series.

Holeshots for McElrath and Forkner each. The most of the class.

Laps led by Jimmy Decotis, third most in the class. His GEICO Honda teammate Jeremy Martin, who was a pre-season title favorite, has yet to lead a lap.

On the back of four consecutive wins, Justin Hill holds a 21-point lead over Aaron Plessinger with three rounds remaining. In a title chase that once appeared to be headed for Vegas (prior to Shane McElrath’s bike problems while leading in Arlington) the title now appears a lock for Hill. If that happens, Hill, like his 250 East Region teammate Joey Savatgy, will be forced to move up to the 450 class in 2018.

How Does McElrath Rebound?

After Hill reeled off three consecutive wins to grab the points lead, McElrath was en route to taking back the red plate in Arlington, as he held a commanding lead in the race. But with just five laps remaining, McElrath experienced a bike problem (still no official word from the team on the exact problem) and had to retire from the race. While his title hopes appear dashed—he’s currently 25 back of Hill—it will be interesting to see if he can rebound to earn a few wins to end the season.

Can Forkner Get a Win?

The Monster Energy/Pro Circuit Kawasaki rider was coming into his own as the series headed for a break, garnering two podiums in the last three rounds. Aside from a crash in Oakland and subsequent 22nd place finish, Forkner has been a model of consistency in his first year, finishing inside the top five in four of six rounds. Can he take the next step and grab a win before the season is out?

[Update: Forkner has been ruled out for this weekend due to soreness in his hip sustained during a practice crash.]

In a year that was supposed to hold so much promise, Jeremy Martin hasn’t been able to right the ship. He’s missed two rounds due to injury (when he was struck by the wheel of Tyler Bowers’ bike in Phoenix), has yet to finish on the podium and has a best-finish of sixth. During the break, Martin rode a race in the 450 class, leading laps in Daytona before a strong second place finish. We’ll see if that helps him finish a lost season strong.

He’ll need a lot of help, but Aaron Plessinger is currently second in points, with a chance at his first career title. Starts have absolutely killed the former rookie of the year, but he’s still managed to pick up four podiums in six rounds. He’ll need wins if he wants to have a chance at the title.

Jimmy Decotis was in the midst of a career year when we last left the West Region. He was leading laps, and looked primed for a podium. While he struggled down the stretch at those rounds, he still finished fourth in Oakland and Arlington. Can he grab a podium before the series ends?

Bowers fractured his right femur in qualifying at Glendale, but he’s expected to be back for this weekend.

The JGR rider is out for the remainder of the supercross season after he dislocated his ankle, shattered his heel, and fractured his lower fibula on press day in Arlington. His replacement is little-known amateur Cade Autenrieth, who will make his pro debut in Seattle.

Is out for the rest of supercross due to a concussion.

Commans injured his arm and wrist when he came up short on a triple in Glendale. He’s back for this weekend.

Lionnet fractured his jaw in Arlington but will return this Saturday.