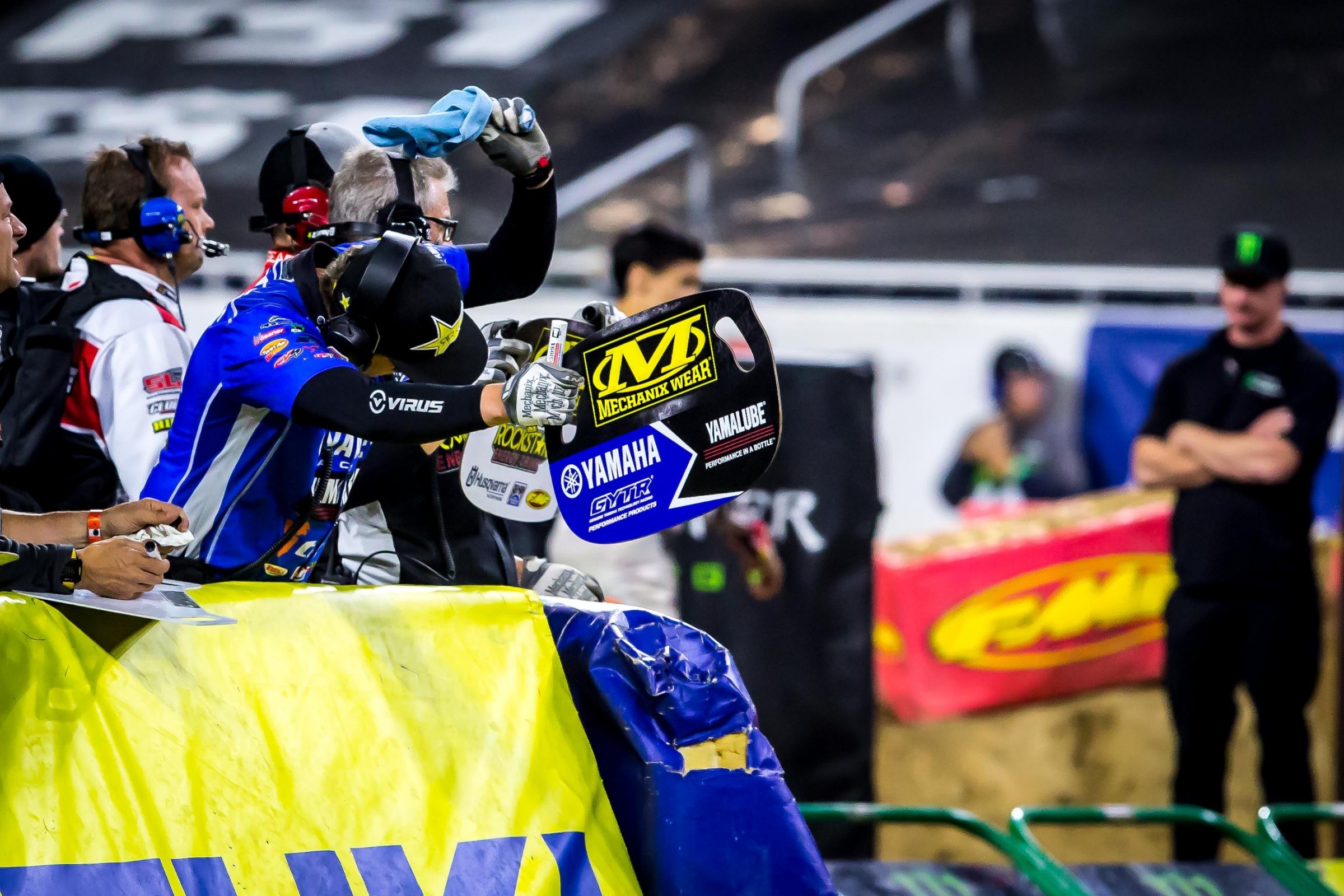 The 450SX points race keeps getting tighter and tighter. What was once a 29-point lead for Ryan Dungey has now dwindled down to just seven points over Eli Tomac. The opening lap continues to be an issue for Dungey, whose average position after lap one is 5.3 while Tomac's is 4.6.

In the 250 class, the points gap is the same as it was last weekend, except we now have a new leader—Joey Savatgy. The Monster Energy/Pro Circuit Kawasaki rider now leads Jordon Smith by nine points. Zach Osborne trails by 10 points after having issues in the first turn and needing a pit stop to repair a broken front wheel.

This chart looks pretty similar to how I envisioned it would before making it. Tomac set fast times early on and then went into management mode. Marvin Musquin struggled early, but then found his groove towards the middle of the race just when Dungey and Davi Millsaps started to catch him. I was surprised by how late in the race Dungey turned his fast lap time, especially considering he was still behind Millsaps at that point.

It seems like Dungey's dwindling points lead is all we've talked about the past couple of weeks, so I thought I'd help provide a visual. It doesn't sound like a lot when you hear he lost five points this week or three that week, but when you look at this graph it's easy to see how fast he is bleeding points.

I thought it would be interesting to look at a privateer's main event lap times. The dotted yellow line is Nick Schmidt's fastest qualifying time and the solid yellow line is how he performed in the main event. You can see there is a pretty sharp rise in times starting on lap eight. At first you might say Schmidt is giving up or not giving 100 percent effort, but it's important to remember that he most likely focuses on his sprint speed during the week and isn't as focused on his fitness. Getting into the main event is the goal and everything after that is icing on the cake. It's also important to note that his times are also being affected by having to pull over for the blue flag when he's getting lapped.

Trey Canard has had a tough season. His best finish so far has been an eighth in Minneapolis and he's missed six rounds due to injuries. However, he did have one bright spot in Detroit, where he finished 11th. He was able to set the fastest segment time of the night for segment 1 (blue) which was about two tenths faster than the next fastest rider through the section. Take a look at the top five riders for each segment.

The 250SX main event was probably the best and most hectic race we've seen all year. All four of these riders held the lead for at least a part of the main event and look at how similar all of their times were. Dylan Ferrandis fell off the pace towards the end, but this is understandable considering he is still fairly new to supercross and was riding hard to try to hold the lead. While Ferrandis was falling off the pace, Joey Savatgy was putting on a hell of a charge to catch Jordon Smith on the second to last lap, dropping his time down to 54.462.