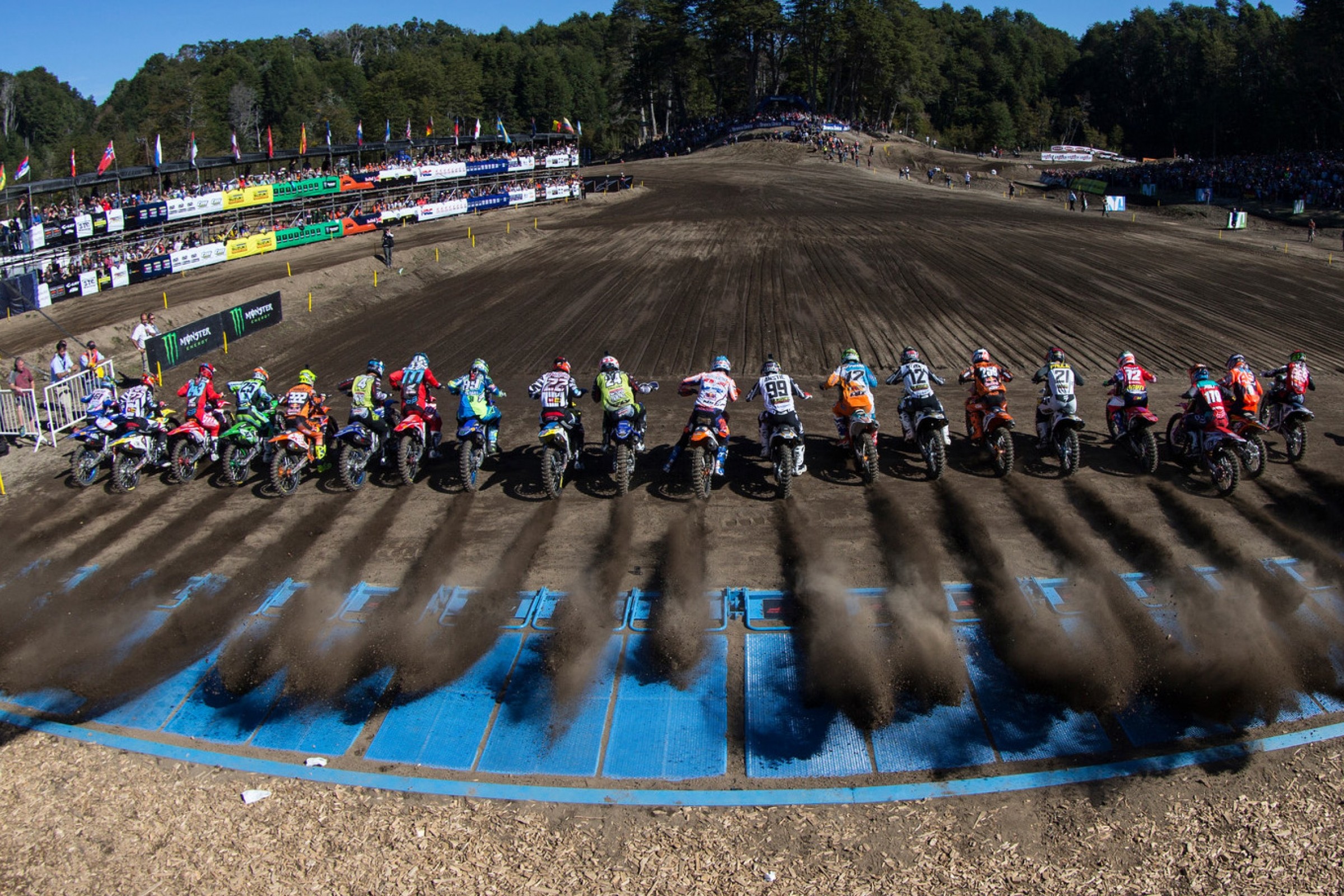 After the deluge and disappointment in Indonesia, MXGP swapped continents and travelled to a sure-fire “banker” with the sandy-esque Neuquen circuit in Argentina always drawing a crowd. Motorcycle racing often encounters some of the most passionate and obsessed fans in this corner of the world—just ask MotoGP or Dakar Rally participants—and coupled with the natural and rural beauty of the Patagonian landscape, the vast travelling distance for the Grand Prix paddock seems less of a burden.

Two thousand seventeen saw the third edition of the Argentine Grand Prix in the popular ski and hiking/adventure resort near Bariloche and the FIM Motocross World Championship was again rapturously received. The riders of the MXGP and MX2 classes were relieved to make a track walk in sunshine and around a well-prepared circuit without fear of surprises and drama that ultimately marked round two at Pangkal Pinang two weeks ago.

The event was sumptuously presented and saw fans perched deep at the fences, but the racing course was not as loamy as some racers hoped and the word “sketchy” was often used in descriptions of the surface throughout the weekend. The hard base under the volcanic earth did not stop the GP protagonists from attacking the terrain, but some of the harder edges and slicker patches caught out the world’s best, such as Red Bull KTM’s Tony Cairoli in the early stages of both motos, Monster Energy Yamaha’s Romain Febvre and even Monster Energy Kawasaki’s Clement Desalle. The Belgian got two excellent starts on his works KX450F and led for three laps in the second sprint, but after a few warnings he eased off the pace and eventually dropped back to 10th for sixth overall.

Argentina was the domain of a fully fit Tim Gajser. The world champion was fastest on Saturday (with Kawasaki’s Jordi Tixier second but then he crashed and hurt his groin, and therefore the French youngster had to sit out the second moto on Sunday) and hunted his way with relish to the lead in both outings. Suffering with the flu in Qatar and Indonesia, Neuquen was finally a glimpse of the full potential of the Slovenian with the new factory CRF450R and it looked ominous for the rest of the MXGP pack. The 20-year-old has now won three of the last four motos in Patagonia.

“It was a perfect weekend and I was riding well,” said Gajser, who now also makes his Honda a little redder as series leader [as it will now be equipped with red number plates]. “The season didn’t start in the best way but I have been working really hard and training back at home, I never stop working and it’s now paying off.”

Monster Energy Yamaha’s Jeremy Van Horebeek was best-of-the-rest with a 2-3 for second overall. The Belgian was at a loss to explain his lack of pace in the opening two rounds but after having “regrouped” and making some technical tweaks to the YZ450FM, he showed more consistency to grasp his first podium finish since Charlotte last year. Teammate Romain Febvre was fifth overall; and the second moto fall proved costly in preventing the sometimes-erratic 2015 champion from his first spray of champagne this term.

Mixing relief with a little disbelief on the podium was second Honda HRC man Evgeny Bobryshev, the Russian defying the effects of a virus to find his way to the runner-up slot in the second moto and securing the last step of the box. Bobryshev’s form warded off numerous hopefuls of third place overall as the MXGP pack circulated close together and with many of the top 10 in a tight bracket of high 1 minute 47 second and low ’48 lap-times, Rockstar Energy IceOne Husqvarna’s Gautier Paulin (fourth) was in the thick of the mid-top 10 disputes.

“The weekend was very difficult, mainly because of the starts and also the riders were very close together on this track and you could not make the difference; you had to take some risks to pass the others,” said Cairoli, whose two errors in the formative stages of the motos meant a busy and draining day for the Sicilian to fire back to seventh overall. Indonesian mud conqueror Shaun Simpson was also in the fray for the top 10 during the first race but was clipped by teammate Arnaud Tonus at the start of the second and the Scot was another rider on the comeback trail, managing 13th place by the flag.

Red Bull KTM provided their fair share of entertainment in the MX2 class with teammates Pauls Jonass and Jorge Prado not only going 1-2 on the day with the two almost scraping plastics several times in the second moto. Team manager Dirk Gruebel joked that his quantity of grey hairs had multiplied by the end of the affair (and that there would be no need to step between the Latvian and Spaniard—who get on well—while the duelling remains clean). Prado is the youngest in the MX2 gate having recently turned 16, and after claiming a podium finish on his Grand Prix debut at Assen last year this was another career milestone in what was just his sixth gate drop in MX2. Ahead was Jonass and relieved after his Qatar GP victory—the first for him and for Latvia—had been tempered by the disappointment of being swallowed by the mud in Indonesia. This was the ideal bounce-back. The 20-year-old faced little other challenge except for the holeshots and starting prowess of his teammate (Prado is also one of the lightest riders in the field).

Jonass’ 1-1 efforts at the site of his first podium appearance as a factory KTM rider in 2015 for Neuquen’s inauguration as a GP facility brought him to within three points of new series leader Jeremy Seewer. The Suzuki man took third on the day after surviving (and conquering) Indonesia and was another to have made his first GP podium visit at Argentina in 2015, so his previous form here was evident. Kemea Yamaha’s Benoit Paturel was frustrated in fourth, as two slips in the second moto saw the Frenchman buried back in ninth place (he’d been second in the first dash) and the USA had reason for cheer with the blossoming potential of Monster Energy DRT Kawasaki’s Darian Sanayei, the former EMX250 race winner blending good starts and the pace of Steve Dixon’s KX250F to hit the top five for the first time in his rookie Grand Prix campaign.

The last intercontinental hop for MXGP until the summer will take place in a fortnight with Leon in Mexico staging round four.