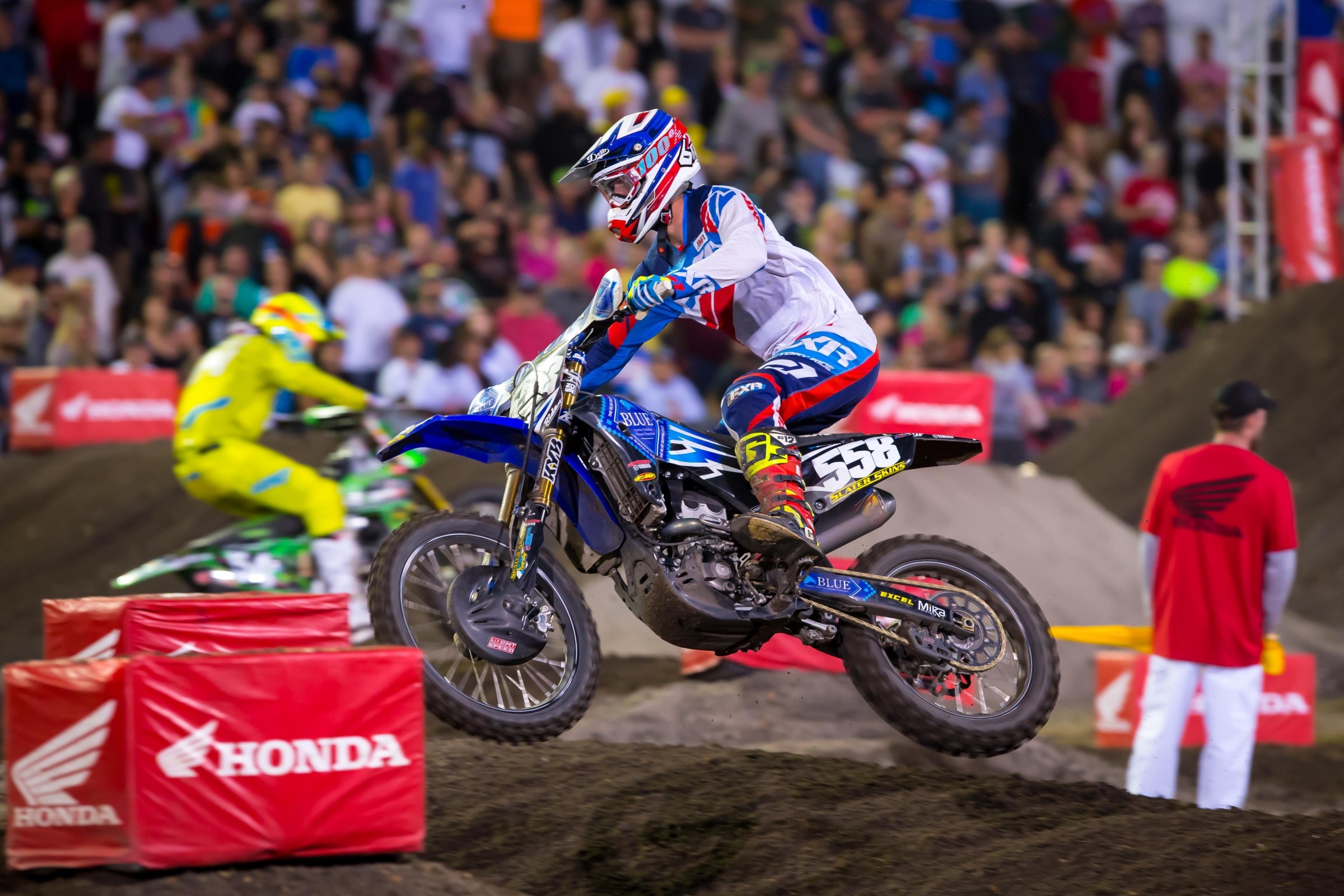 You probably know Jerry Robin from when he used a 1985 Honda CR250R to qualify for Loretta Lynn’s a couple years ago. Since then, a lot has happened to Jerry. He quit racing motocross for awhile to race GNCCs, he got a ride with the Blue Buffalo/Slater Skins Yamaha team, and unfortunately, he lost his good friend and roommate Dylan Slusser.

We caught up with the Minnesota native to see how things are developing with the team and how he feels his first ever supercross race in Daytona went.

Racer X: So you’ve kind of had a winding road towards turning pro. You quit racing at one point and then tried some off-road stuff.
Jerry Robin: Yeah, I kind of switched to GNCC for a little bit. I’ve always rode off-road races growing up. I tried to do a few GNCCs … actually I never really even got to try because I broke my back before the season. So that got shut down pretty quick. [Laughs]

What made you want to quit moto and go the off-road route?
Honestly, I think I was just over all of the drama in the industry of motocross. Woods riders are a lot more laid back, it’s a whole different feel. So I was kind of like looking for something new. I love off-road races. I still love to go to them, but motocross is a lot more fun for me now.

When you first became known to everyone it was because of the old CR250 thing. Have you had trouble shedding that image of a fast guy on a slow bike and showing people you’re actually a legit dude who can get decent results?
I mean it still hasn’t let go after four years almost. I like it, but I definitely don’t wanna be just known for that. I’m trying my best to … this season I’m starting to feel good on the bike. The off-season was kind of goofy and I never really got to ride at all. Just as a team as a whole it was kind of a struggle on the off-season. Things are getting a lot smoother so I think definitely by the time outdoors rolls around, we’ll have everything figured out and my fitness will be good. I think I could definitely be a top five, top-10 guy all season.

How did your deal with Blue Buffalo come about? Was it always planned for you to ride supercross or was this more a fill-in deal because of [Kyle] Cunningham and the team parted ways?
Originally I was signed for outdoors, and they were like, “For sure we want you for outdoors and then next year do supercross.” I was like, “Okay, sick.” I was gonna do arenacross and get that over with just for next year. I ended up struggling … I actually injured my arm pretty bad at an arenacross, and I was just over it. I was like, “Man I’m just gonna get ready for outdoors.” Then Kyle, he ended up parting ways with the team and I needed like two more points for the arenacross thing, and they [Blue Buffalo] were like, “Well if you think you can get it done we would like you to finish up the East Coast for us.” So I was like, “Man, I’ve rode a supercross track for maybe two weeks. I don’t really have that much time on a supercross track.” And they were like, “Personally we would like you to race the rest of the East Coast.” And I was like, “Okay, then let’s go!” So I got the points and went to Daytona … I mean I rode the bike at arenacross, but I don’t really have that much time on it. It’s fun, I love the pro racing thing. It’s a lot more fun to me than being an amateur.

So that kind of answers why you made your supercross debut at Daytona and not Minneapolis. You just had to get the arenacross points.
Yeah, I was struggling for awhile. I think it was at Baltimore I got hurt, so I didn’t score any points there. Then I went to Louisville and I got two points, so I needed two more. Then I went to Nashville and I think I just got into some really weird first lap incidents, and I just never got my points and I was like, “Man I’m over this.” So I’m glad to be done with arenacross.

So your impression of the Road to Supercross isn’t a positive one then?
I mean, my first round I was pumped on. I got fifth and I was like, “That wasn’t too bad!” And then every round after that it was just piling on. [Laughs]

Did you learn anything when you went through it?
It really taught me how much a start matters and little things like that. In outdoors—the few I did—I don’t know why but I’ve been kind of bad at starts. The few outdoors I did, I would come from like 38th to 12th in two laps. In outdoors it’s a little different because there are so many lines. But in supercross, there are so many fast dudes on a smooth track you can only go so much faster than somebody.

How has it been working with the Blue Buffalo team? I know their year hasn’t gone as smoothly as they would have liked.
Personally, the things I’ve dealt with in the last season haven’t been the greatest. But things are definitely getting a lot better. Over the weekend, I was talking with Broc [Schmelyun] and Chad Sanner and they’re going to go all in with me and stuff like that now. I’m going to be the only rider for the rest of the year. So now all the focus is on me and that helps me a lot just mentally knowing that I can always go to them about things. I hate asking about things in general, so I would always kind of get the short end of things because I wouldn’t talk. But things are getting a lot better now, so it should be good for the rest of the season.

Has it been hard for you to get deals and stuff as a pro because you don’t have an assertive personality?
For sure. I’ve seen dudes just say how it is and that’s how it’s going to be and they always get it. But I’ve never been that way, and I don’t know if I need to start getting that way. I don’t want to, but if I gotta do what’s best for my career then that’s that.

Let’s talk about how your first supercross race went. You got fifth in your heat race, are you pretty happy with that?
Yeah, I was doing better in pro races than I would do in the Lites class in arenacross. [Laughs] I don’t know what it is about arenacross, but I couldn’t get into it and I always really like a challenge. So when I show up and there’s factory dudes like Savatgy and stuff and I’m like, “Man, I can battle with those dudes!” It always gives me a little extra fire to ride like I normally know how to.

But it felt good. Right off the start, I think I was in seventh or eighth and I passed up to fifth … somewhere around there. It was cool. I was definitely nervous and I ended up getting stomach cramps in the main event when I was running seventh. I don’t know if that was nerves or not eating enough or … who knows. We just gotta dial it in and see how the rest of the season goes.

Yesterday was by far one of the hardest things I've had to see and deal with. I did everything I could to get you to the hospital as fast as I could. Crazy to think that I was on the phone with you 15 minutes before the aneurism happened and we were so pumped to ride together again. I'll never forget all the late nights working on bikes together jamming out to some punk rock and just always giving eachother shit. one of the greatest friends anyone could ask for. I want everyone to be thankful for everyone you have in your life because it can change in literally a matter of minutes. rest easy Slussy

And you ran Dylan’s [Slusser] number this weekend. Was that something his mom asked you to do?
I was hanging out with Lori [Dylan’s mom] and I was wondering if she would ever release the number or just kind of talk to the AMA and keep it for Dylan. She said, “Probably the only person that I’d let run it is probably just you,” just because I was so close to Dylan. I was like, “Well do you want me to run it the rest of the season?” So yeah, she was really happy that I wanted to. So far I’ve done the number pretty well, making my first main. The result definitely wasn’t there, but how I rode I think was pretty decent. Running a top-10 pace for that long with no crashes.

What does it mean to you to be able to run that number?
It means a lot. Me and Dylan … we’ve always been buddies. I would only seem him probably twice a year for the last couple of years, but when I came to Pennsylvania he started coming over to Chad’s a lot because him and Chad are really close. Me and Dylan started getting closer, then Dylan just asked me to come and live with him for awhile. So I lived with Dylan for about two months … I mean, we did everything together. It was like I was his little brother. So it definitely means a lot. I kind of teared up on the line and everything.

Does it give you a little extra motivation having that on your back?
Yeah, I think it definitely does. Lori … she was talking to me all day, just telling me good luck. I see how much it means to her. So it hits you hard when it’s that experience but, I don’t know, it’s cool.