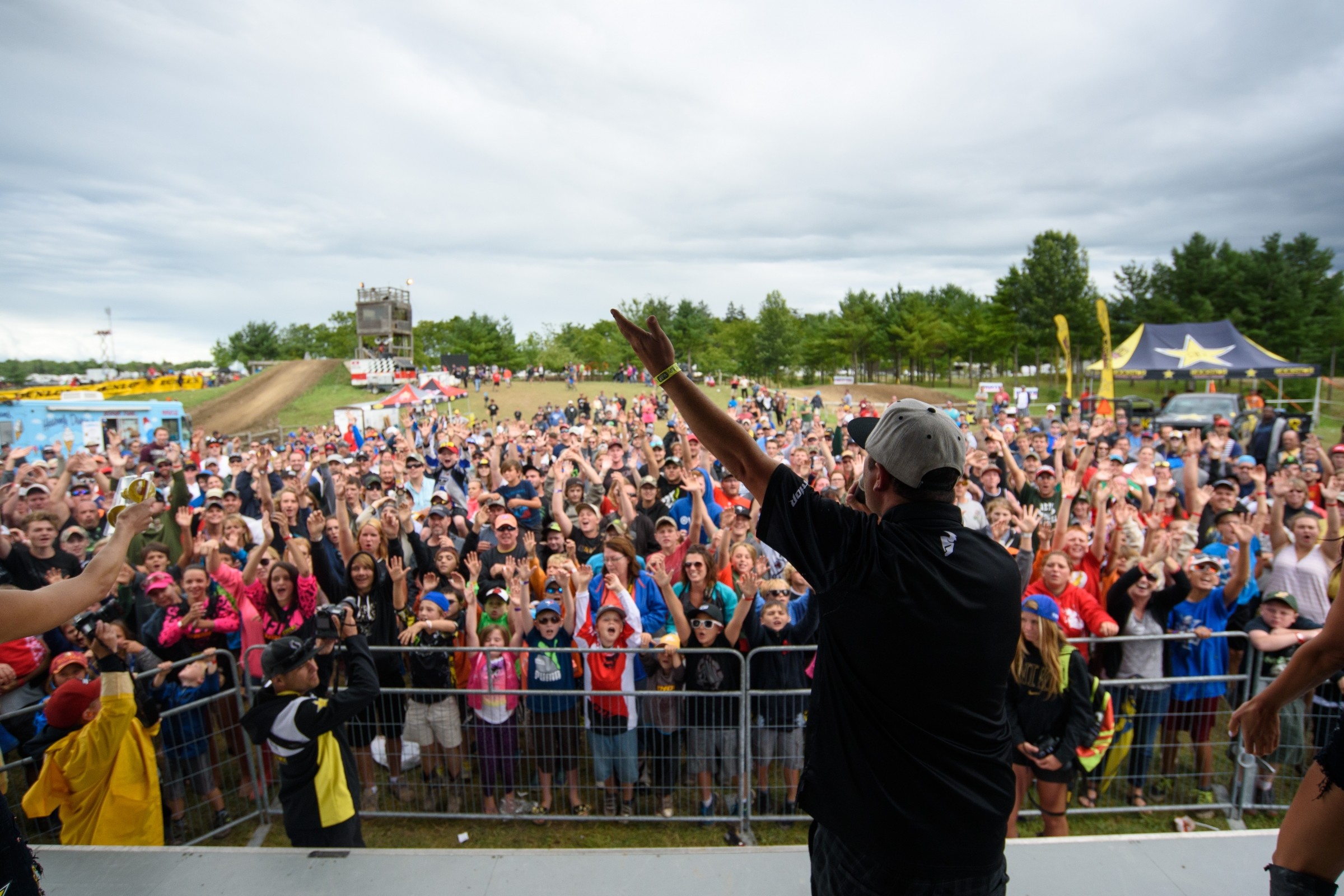 The big news in Canadian motocross announced the day before the Toronto Supercross was the formation of a combined indoor/outdoor series in 2018 with CMA/FIM sanctioning. The folks at JetWerx, who have run successful arenacross series on both sides of the border, are taking a huge leap with this announcement seeing as how there is already a national motocross series ran by the CMRC which has been around since the mid-90s.

Ex-pro racer Justin Thompson and brother of current pro Cole Thompson is the president of JetWerx and I caught up with him after the press conference to get some more details.

Racer X: The big news at the Toronto Supercross was the announcement of a 2018 JetWerx series. It’s indoors, outdoors. There’s even going to be a supercross involved, a $100,000 triple crown for a guy who wins all three series. First off, let’s rewind a little bit. What’s a little bit of your background, a little bit of your history in promotion in the sport?
Justin Thompson: Even before I became a promoter I worked with a lot of promoters. My background is I raced professionally for 10 years. I never had crazy success with it. Made some main events, stuff like that, but nothing crazy. And then from there I built into a track building company, and from that track building company became working with a lot of promoters across North America. We also promoted our own stuff, small events, stuff like that. It built to the point where we were working with some pretty big promoters and eventually taking over some of the series. We purchased the arenacross series years ago and have done over 200 events with success. You got to see a lot of good riders come through into the pro ranks, and that’s kind of where it’s got us to now. We are Canadian even though we had our USA operation. We are Canadian and we always wanted to bring that professional USA atmosphere to Canada.

For 2017 you’re still going to have your arenacross series in the fall, correct?
Yes. We’ll have our six rounds of the Canadian National Arenacross series that’s with the CMA and FIM this year which is a little bit of an addition, which is nice to give it a little bit more clout. It’ll be on MavTV again. I’m sure the re-runs are still on there from last year’s series. So it’s a good series. You’re from Canada, you know there’s nothing up here that’s indoor racing, and that’s kind of where we wanted to start with to see if we could make the footprint in the indoor stuff, and from there we’d build into other venues.

So for 2018, this is a big expansion for yourself and your partners. You’ve got a supercross race in Hamilton and you’ve got your regular arenacross tour along with outdoors. Why is now the right time?
I just think that the sport in Canada for a long time has just hit kind of a plateau. We’ve seen it over the years in other countries and they’ve managed to pull things together and start … like the Aussie Open [AUS-X Open], and rebirth kind of the country into a new format, a new way of thinking about motocross and it’s rejuvenated it. So when we saw that happening around the world, with our business model, our background, the fact that we have in-house track builders, in-house marketing teams, everything in-house, it kind of made sense to try to take this project on. Really what I always say is we’re Americanizing it. That’s really what we’re trying to do is make it like it’s a U.S. event. We’ll never quite get to the Feld level because there’s huge money involved there, but if we can make it as close to that as possible, that’s our goal.

Take me through the different aspects of the 2018 program that you’re coming out with for supercross, motocross and of course your arenacross series.
It will start off … it will be a supercross, very similar along the lines of the Aussie Open [AUS-X Open], even some of the way that the track design would be and everything like that—in a smaller venue than a football field but very similar to the way that the Aussie Open is. So that will start it off. It’ll move from that into outdoor motocross. It will be eight rounds of outdoor motocross. Some of the tracks we can’t talk about, but will be in there. Sand Del Lee, a great track that had been off the schedule for a few years. There are a few new ones out west. It’ll grow into our arenacross program.

So it will take it from a 10-week marketable program into I believe a 32-week marketable program for the manufacturers to try to push their products for a longer period, and get more traction out of each advertisement they do and each promotional campaign that they do, instead of it just being so tight in the summertime. So that’s our whole goal with it.

Obviously you know the CMRC has been running a national series for a while. Me as a Canadian, the last thing I want to see is an IndyCar-type of split of teams. What kind of offers are you saying to the teams to come to your series in ’18? Obviously like you said, the full week series is a big draw because now they can try to get some more money from their sponsors. But why should a team do your series?
Once again, like I said, the marketability for a team and for a manufacturer. I think that if we can give them longevity and in return a greater ROI, that’s the ultimate goal for us. It’s been lacking for a long time, and I think if we can do that along with help the teams…. That’s our goal from the get-go. As a promoter you really understand the way the structures kind of fall apart a little bit sometimes when teams can’t get to the track. You understand as an indoor promoter more than any because you need those teams to be there to make your show proper.

Outdoors it’s a little different. It’s just a different genetics. But if we take that show atmosphere and we put it across the whole board, and everything is a show, at the end of the day if we don’t have the teams there and they’re not strong and they’re not capable, we don’t have the proper show. We can’t sell that to a greater corporation. So that’s really our goal is to make the teams strong. Not that they haven’t been before—it’s that we could make them stronger. That’s another one of our goals is to inject funds back into the team.

That’s what I’ve been saying down here. A rising tide lifts all ships. I do wish the folks at Feld, who do very well in the supercross series, would reach out to some of these teams and try to help. I try to make money for a living, as do you. Money is good, but there comes a point where helping out your partners, the ones that put on the show, is really something that should happen.
One hundred percent. I think that some of the guys at Feld are trying to do that, and that’s a huge step forward. That’s their show. That’s what they make their money off of, is the riders and the teams. You’ve been behind the wrenches. I’ve been a rider and behind the wrenches. The work that goes in for these guys to be at the track each week is astronomical for the little money that they do make. So if we can broaden it and bring it into the future into a NASCAR type feel, the money will be there and it will be across the board. Instead of just being a small little net of money that one person’s making it will be across the whole board.

Do you have a title sponsor yet or anything you can tell us? Do you have guys lined up?
Before we can announce any of that we have to wait on a couple things. But we do have a couple things in line that are very turnkey. We just can’t announce until the proper order of things.

One thing you’ve done that is I think a smart thing is you’ve gotten the CMA back into the picture. They have had a lot of issues over the years that allowed the CMRC to come into Canada. You’re getting the CMA and therefore getting the FIM, that was a really smart move. It now gets your series recognized internationally. It helps the Motocross des Nations effort as well. We saw Kourtney Lloyd, the team manager, in your press conference. Talk about getting them back on board, how receptive they were, how hard it was, and the benefits of having them.
Starting from the beginning it was always our focus to build this thing into something that is helping the sport, but also building it back to a world stage. I think that it’s been long lost, like you were saying there, over the years because back in the day there were issues. I don’t know much about them because I was too young, but I’ve heard about them. I went in with a clear, level head, along with a few other people. We just sat down and said, this is our plan, this is our goal, this is our vision. People are people, right? You’ve got to get along with people to make business work. Sometimes it’s not the perfect situation but if you can look past it and you’re all driving in the same direction that was our ultimate goal. So it was a give and take. It can’t be one-sided on either side, and that’s kind of how we looked at it. If we’re going to do this, this, and this then we have to give this. That’s kind of how we did it. It’s not an FIM-only deal. It’s an FIM/CMA deal. So that’s kind of how we bridged that gap.

The other thing that we put in place is that we built a buffer between the promoter and the sanctioning body, and with doing that I think it made it so there is a mediator to everything. It wasn’t just strictly one coming unglued about something and not dealing with it right. It was a group effort to try to put it back together, instead of just being one-sided or the other side, or this is right or that is wrong. I think by us being very open like that it made it a little bit easier of a process. I think it might not have been that easy if I went in there with a chip on my shoulder, something like that, or I had history or anything like that. I’m sure it would not have been that easy. But if I went and sat down and I had been burnt on a bridge before then I’m sure it would be a little bit rougher in the past. But the ultimate goal was to separate sanctioning from promotion. That was our ultimate goal there to break the two apart instead of it being self-promoted events, self-sanctioned events. There’s got to be a rule breaker and a rule maker and they can’t be the same person.