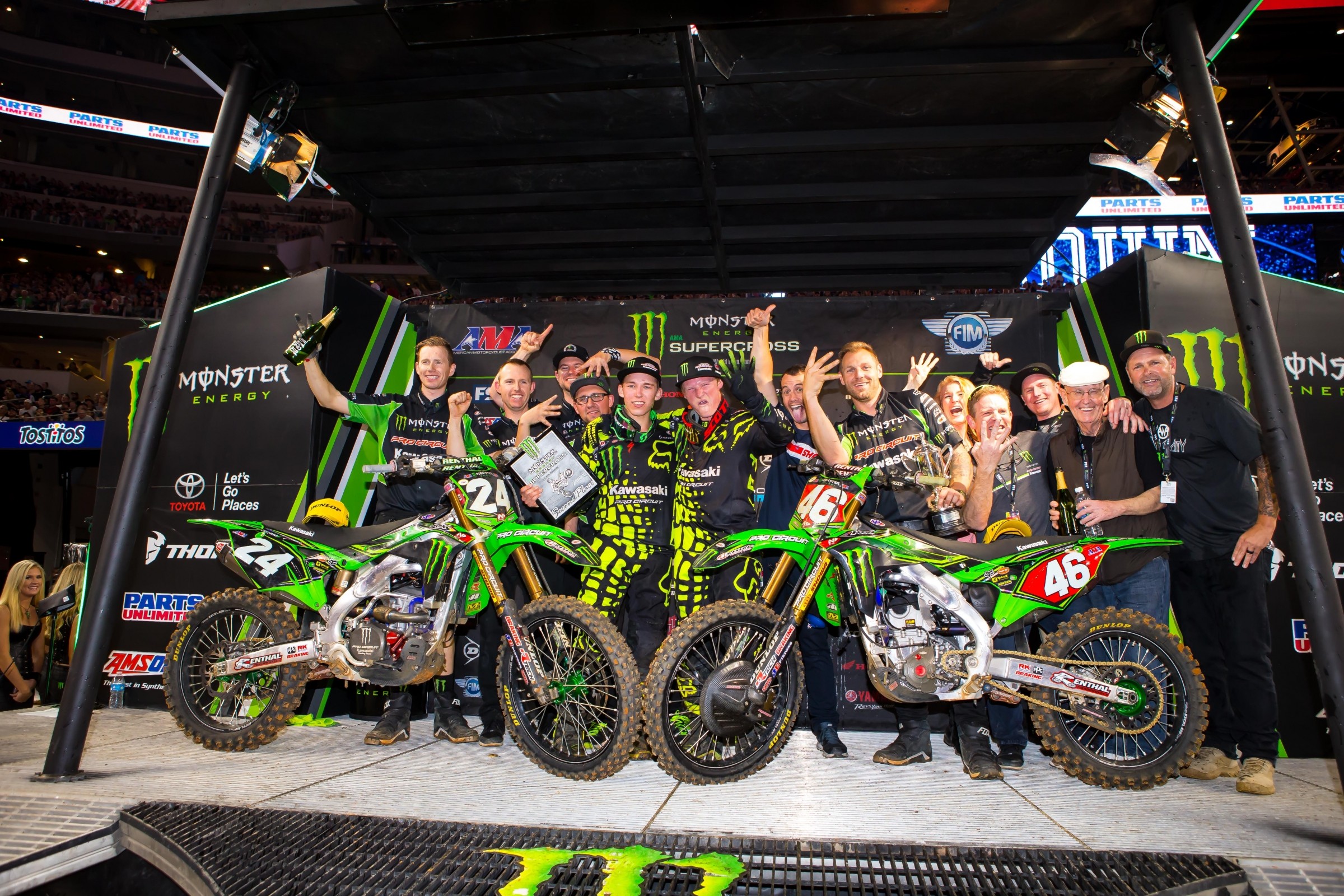 By Kyle Scott and Steve Matthes

In the 250 class, what started off as setup for great racing ended with championship tragedy for Shane McElrath. McElrath started the race out front and gapped the new series points leader, Justin Hill by several seconds before having bike issues. It is unclear at this point to what caused the issue, but it seemed like the bike was cutting out intermittently. Shane pulled on and off the track a few times, seemingly torn between just trying to finish and salvage points versus risking his safety. When he went into the mechanic’s area, it looked like they all just shrugged and then he went back out on the track. I believe he pulled off eventually, but McElrath ultimately finished in last and gave up 24 points to Hill.

Hill had another perfect day. He qualified fastest, won his heat, and won the main. That's four wins in a row after this weekend. Even though Hill didn’t get the win tonight in the manner he wanted, he stretched his points lead to 17 over Aaron Plessinger, who finished third tonight. “I’ll take it. But yeah it’s emotional for me. Shane’s a good guy and I don’t want to him to have troubles. It’s a dangerous sport and you have to have confidence in your machine. When you have issues, it’s a bummer. I want to beat these guys straight up.”

Plessinger found himself on the box again for the fourth time this season, but he didn’t make it easy on himself. Plessinger’s poor starts have forced him to come through the pack almost every race this season and for most of his career. By lap two, he was in 12th place. He put on a charge and made it to 5th with five minutes to go, plus one lap. Plessinger got around Jimmy Decotis who got his second fourth place finish in a row.

Austin Forkner notched his best supercross finish by one spot tonight with a second in the main. He challenged Hill for the win in the heat race and pressured Hill in the main as well. Forkner is an impressive 17-year-old, that is not doubt. In the post-race press conference Forkner mentioned that he hurt his back casing a quad back in November and is looking forward to at least 10 days off the motorcycle with the upcoming break for the 250 West riders as we begin the 250 East next weekend in Minneapolis.

As crazy as the 250SX main event was, the 450SX main was one of the wilder races we’ve seen a in while. First off the start MCR Honda’s Justin Brayton went down and appeared unconscious which forced a red flag while Monster Yamaha’s Cooper Webb was out front with Honda’s Cole Seely second.

On the restart it was Red Bull KTM’s Marvin Musquin who got a fantastic start and quickly put some time on the rest of the field. Part of the reason why was Musquin wheeling into the second set of whoops, touching down once and then jumping out the rest of the way. It was very fast.

Musquin’s win was the first of his career and the first for a French rider in the premiere class since David Vuillemin won in Indianapolis 2002. Thanks to Le Cobra himself for that trivia stat! Musquin said that the 26 lap main event, the longest one of the season so far, was really long and hard to concentrate on his six second lead. It was a fantastic ride by Musquin who was fast all day long in practice as he traded the pole position with Monster Kawasaki’s Eli Tomac all day long.

"I grabbed the holeshot on the restart and just tried to focus on what was in front of me. It was so easy to make a mistake out there tonight," said Musquin. "This [victory] feels so good, to stand up here [on top of the podium] for the first time in my career. I've dreamed of this since I was a little boy in France and would like to dedicate this to my brother, who has been so supportive of me and gone through difficult times the past few years."

Speaking of Tomac, he came into the race on a two race winning streak but he got a poor start in the main, was ripping through the pack when he tipped over in a turn and encountered a front brake problem that forced him to pull into the pits to get the line cut.

And Webb was up near the front also when he encountered a flat and had to pull in to change a wheel. Both Tomac and Webb went back out and scored points that could prove to be valuable near the end of the series.

Once Webb went out, Cole Seely of Honda rode a lonely race in second, never close enough to Musquin to make a run and only late did he have to worry about Rockstar Husqvarna’s Jason Anderson who ended up third.

Rockstar Husqvaran’s Dean Wilson and your points leader, Red Bull KTM’s Ryan Dungey battled for fourth place practically the whole main event before Dungey got around Wilson before the first whoop section. Despite finishing off of the podium, Dungey still managed to leave Texas with a larger advantage in the championship due to Tomac's troubles. He now holds an 18-point lead over Musquin and sits 22-points ahead of Seely, who both surpassed Tomac, who finished 15th, in the standings.

Ride 365’s Malcolm Stewart went down on the first start and tweaked his bike all up. He did end up with a season best tenth overall but said that his crash in the first main didn’t help things out.

Yamaha’s Chad Reed got a flat in the main event just like Webb but it was so late in the race that he didn’t have time to rejoin it. Reed’s runner-up in Glendale continues to be the high point for the vet. RCH Suzuki’s Justin Bogle won a heat race which had to be a season high for him and was second early in the main before going down. He did eventually make it up to eleventh while teammate Broc Tickle took advantage of the chaos around him to get a season-best sixth.