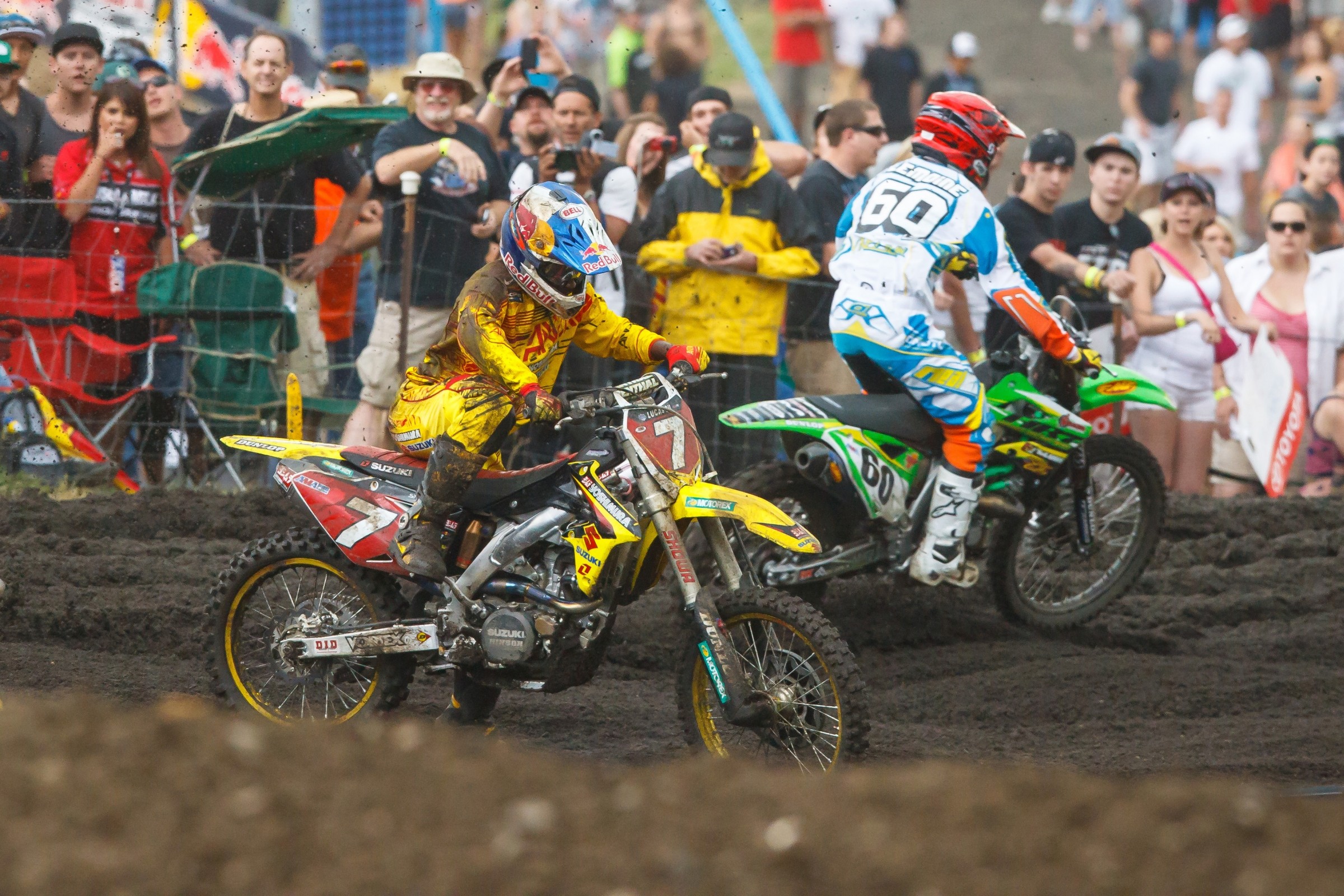 By now you know what happened to Honda HRC’s Ken Roczen at Anaheim 2. He crashed spectacularly, losing control of his bike high above the Angel Stadium floor, and then landed violently on his left arm. He was the points leader going into Anaheim 2. Sadly, he left in an ambulance. This isn’t the first time a series points leader was injured and knocked out of not only the lead, but the championship. So for this week’s List, we thought we would show that Roczen isn’t the only unlucky leader we’ve seen over the years.

The Rockstar Husqvarna rider has had the dubious distinction of losing the points lead twice, for events that occurred away from Monster Energy AMA Supercross. In 2014, while riding for Monster Energy/Pro Circuit Kawasaki, he crashed while practicing with a sizable points lead, forcing him out of the series with two rounds to go. Last year, his second with Husqvarna, he had the red plate after two rounds, only to have to miss the Toronto race due to not having the proper visa!

That same 2014 East Region season, Adam had the points lead through Detroit, he then suffered a separated shoulder in Toronto and was done.

Back in 1990 the Honda factory rider had a sizable points lead in the AMA 125cc Nationals over Guy Cooper and defending champion Mike Kiedrowski, his teammate. But then JMB crashed in the Washougal whoops and broke his forearm. He was ready to go by the last round (held in October at Unadilla) but when Honda team manager Roger DeCoster told him he might need to help Kiedrowski, Bayle declined to race. Suzuki’s Cooper ended up winning the title over the “MX Kied” by one point (518 to 517).

Back in 1984 two Italian riders, Cagiva’s Corrado Maddii and Suzuki’s Michele Rinaldi, were both vying to become the first Italian to ever win an FIM World Championship. During Saturday practice Maddii, the points leader, was torpedoed by another rider who was practicing starts. Maddii suffered a broken leg, and Rinaldi ended up in the history books instead.

Few probably recall that in 1998 Jeremy McGrath was the 250 Nationals points leader after two rounds, while riding for Chaparral Yamaha. Then he was diagnosed with a broken wrist from a previous crash and dropped out of the outdoors to be ready to defend his AMA Supercross Championship the following year.

In 1983, his first year as a Honda rider, the Hurricane was way out in front in the AMA Supercross Championship when he broke his wrist on press day in Orlando. The beneficiary? His younger Honda teammate David Bailey.

Riding the 125 West Region for Yamaha of Troy, Casey Johnson won two of the first four rounds and was in the points lead when the series went back to Anaheim. There someone landed on him and snapped his arm, and that was that.

In 2015 Eli won the first five 450 Lucas Oil Pro Motocross motos with seeming ease aboard a GEICO Honda, but then while way out front in the second moto at Thunder Valley he crashed violently, suffering separations to both shoulders and ending his season.

In 2009 Monster Energy Kawasaki’s Ryan Villopoto dominated the first round of Lucas Oil Pro Motocross at Glen Helen. But in the week between Glen Helen and Hangtown (the second round) he tore his ACL in practice, which ended his season.

With RV out in ’09, Mike Alessi stepped up, and the Rockstar Makita Suzuki rider won Hangtown and then Freestone in Texas and appeared to be in full control of the series. Then he got hurt while practicing at the fourth round at High Point Raceway, shattering his kneecap.

In one of the more unlucky breaks, Yamaha’s David Vuillemin was winning the 2002 AMA Supercross Series as it made the turn for Daytona. But then he hurt his shoulder while doing a magazine photo shoot and was unable to race. Honda’s Ricky Carmichael won and that was that.

In 2001 Travis Pastrana was well out front and winning the AMA 125 MX Championship, only to crash violently on the last lap of the second moto at Unadilla. He was still the points leader when the series went to Kenworthy’s, but he struggled. Then he crashed while competing in the Gravity Games on the eve of the Spring Creek National and had to pull off due to the concussion he suffered at the freestyle competition.

Unluckiest of all? Probably James Stewart. In 2007 the then-Kawasaki rider was 24 points ahead of Ricky Carmichael after Colorado, though RC wasn’t racing a full schedule in his retirement season—and Stewart had completely missed the Unadilla National (where RC didn’t race) after suffering a concussion in practice. At the next round at Washougal, Stewart blew his left knee out when he put his foot down in the corner near the mechanics’ area.

One year later in AMA Supercross, Stewart was tied for the lead with Chad Reed after two rounds, but just before the next race (Anaheim 2) he called the media into the Monster Energy Kawasaki rig to inform us that he had injured his knee and was immediately going to have surgery.

And then there’s what happened in 2012 at Thunder Valley. Stewart, now riding a Suzuki, had won the first four 450 motos in Lucas Oil Pro Motocross. He was well out in front in the first moto in Colorado when a photographer decided to cross the track right in front of him. James didn’t hit the guy, but the surprise seemed to throw him off and ended up cross-rutting and crashing in practically the same spot where Eli Tomac would crash three years later while he was way out front.

We surely missed a few others, so let us know in the comments below.