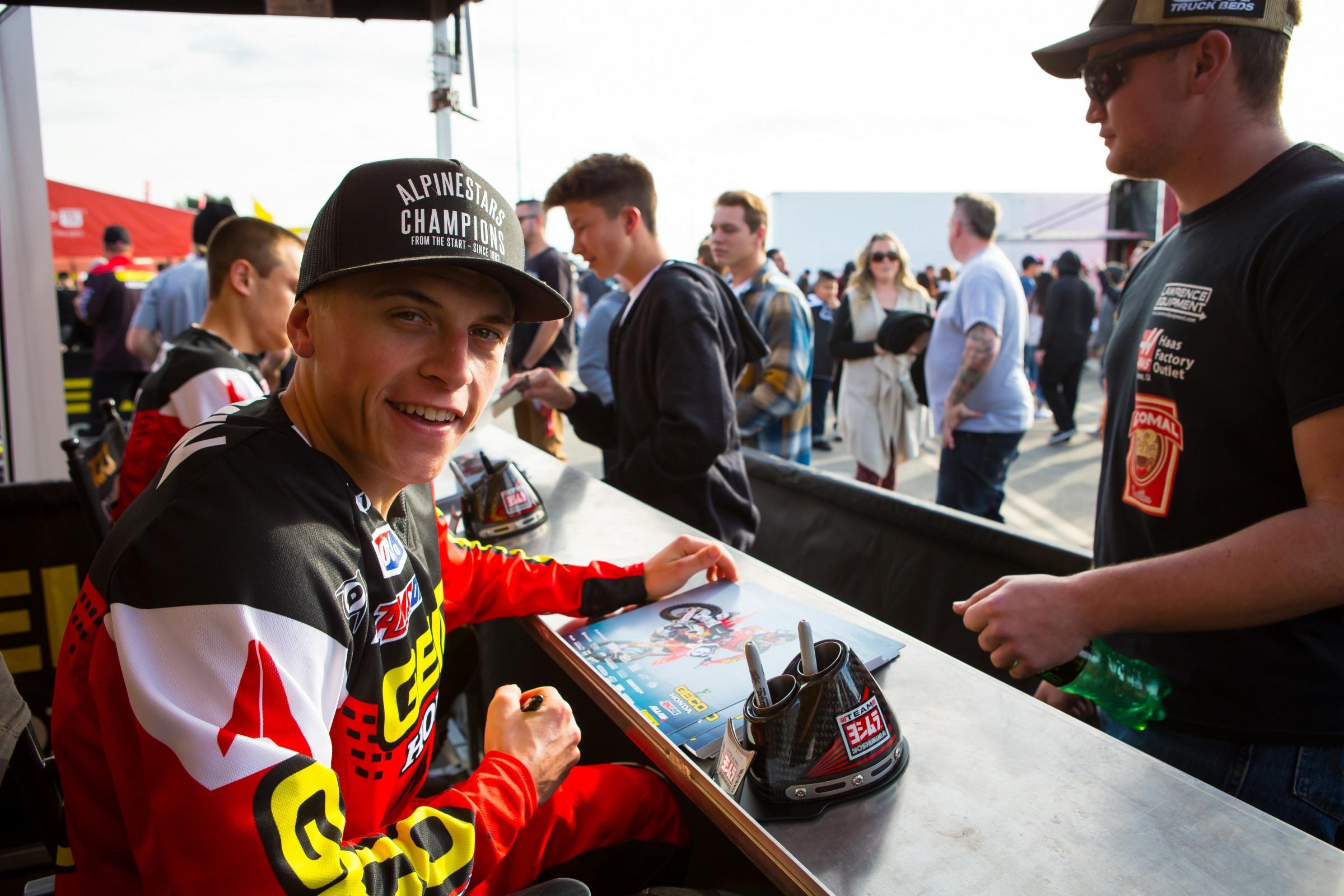 Ken Roczen winning the opener came as no surprise. After all, we knew he was going to be good and this isn’t the first time he’s done it. It sure feels different this time around though, almost like it was expected. He made it look easy too, beating Ryan Dungey by just over 16 seconds. Sure, it’s only the first race of the season, but if he’s as dominant in San Diego as he was in Anaheim the competition is going to have an even tougher time trying not to be worried.–Aaron Hansel

That’s apparently what happened inside Eli Tomac’s arms at A1 while the Monster Energy Kawasaki rider was chasing Roczen early in the race. “My arms set off a friggin’ mushroom cloud bigger than anything that has ever happened,” Tomac said after the race. It’s not something Tomac suffers from regularly and it was strange to see him suddenly fade and drop three spots. We’ll see if more bombs go off in this weekend’s 450SX main. -Hansel

That’s what Shane McElrath handed to the monkey on his back when he took the first win of his career on Saturday night. It’s not like it got handed to him either—McElrath won his heat then grabbed the holeshot and led every single lap of the 250SX main, refusing to let the pressure get to him when Aaron Plessinger slowly started to close in. We’ll see how the rest of the 250SX field reacts in San Diego now that opening round jitters are in the past. -Hansel

Not bad, not great

You probably weren’t wowed by Jeremy Martin’s sixth place result last week, and he probably wasn’t either. But it’s better than you think. The GEICO Honda rider got a terrible start, finishing the first lap all the way back in 12th place, and was in the unenviable position of having to race through the pack on a track that didn’t have much in the way of separation. Martin is better than sixth place, his fastest qualifying time from A1 proves it, and if he can avoid trouble on the start you can expect a better result in San Diego. –Hansel

Aaron Plessinger was very good at A1 and if he would’ve had a few more laps in the 250SX main we might have seen a spirited battle for the win between him and McElrath—the Yamalube/Star Racing Yamaha rider was slowly catching McElrath but simply ran out of time. Plessinger is going to win races before this season ends. Will he get one in San Diego? –Hansel

Troy Lee Designs/Red Bull KTM team manager Tyler Keefe certainly has a reason to be optimistic about his teams’ title chances after the first round. Not only did Shane McElrath claim his first career victory, but Mitchell Oldenburg matched a career-high fourth. On the Pulpmx Show Monday, McElrath praised his teammate, saying: “I expect big things out of Oldenburg. We’ve been pushing each other for the last four months. He didn’t have a very good start [at Anaheim 1], but to end up where he did—fourth—that was a solid ride from him.” Oldenburg has never reached the podium in his 250 career, but there’s certainly a reason to be hopeful he will this year. –Chase Stallo

Anaheim can be a pressure cooker for even the most seasoned vets, and even more so for an 18-year-old that many have tabbed as winning the title in his rookie year. Austin Forkner is Mitch Payton’s latest hope to end a five-year SX title drought, with expectations sky high after an impressive 2016 250MX Rookie of the Year campaign. Despite a crash in the main, Forkner managed eighth in his debut and told us after the race he’s confident heading into San Diego. “Not exactly where I want to be, but I got the first race out of the way. I’m actually really confident going into next weekend.” -Stallo

Cooper Webb has delivered in pressure packed situations in his career (see Las Vegas 2016), but Anaheim 1 was different for the two-time 250SX champion and he admitted the nerves got to him. “I think it was a little stage fright, I guess you could say. When I lined up I’m just looking at all the guys I’m racing and I think it kind of just sank in a little too much. Just get that confidence and go from there.” Let’s see how Webb rebounds this weekend. –Stallo

Behind a second place finish at the opener, Ryan Dungey now has 33 podium finishes in the last 34 races dating back to Phoenix (round two) in 2015. A second consecutive runner-up finish at the opener was also Dungey’s seventh podium out of eight 450SX openers. (He finished fourth in 2015.) Surprisingly though, in eight attempts in the 450 Class, Dungey has never won the opener. Anaheim 1 also marked Dungey’s first AMA points-paying race since his injury at Thunder Valley in early June. Dungey told us after the race he was happy with his result. “It’s the first time back on the gate in a while so it’s nice to get things rolling again. But no excuses at all either though. So I’m happy with tonight’s performance.” Dungey won in the first trip to San Diego (Round 2) a year ago, can he do it again? -Stallo

Throughout his long, illustrious career, Chad Reed has won in San Diego six times. And don’t think he can’t do it again. If you remember, last year he pushed eventual champion Ryan Dungey for the entire 20 laps before finishing second. His 40th career appearance at Anaheim was certainly a disappointment as Reed DNF’d after his water pump broke when he collided with Weston Peick. But if there’s a place for Reed to bounce back, it’s certainly San Diego. –Stallo