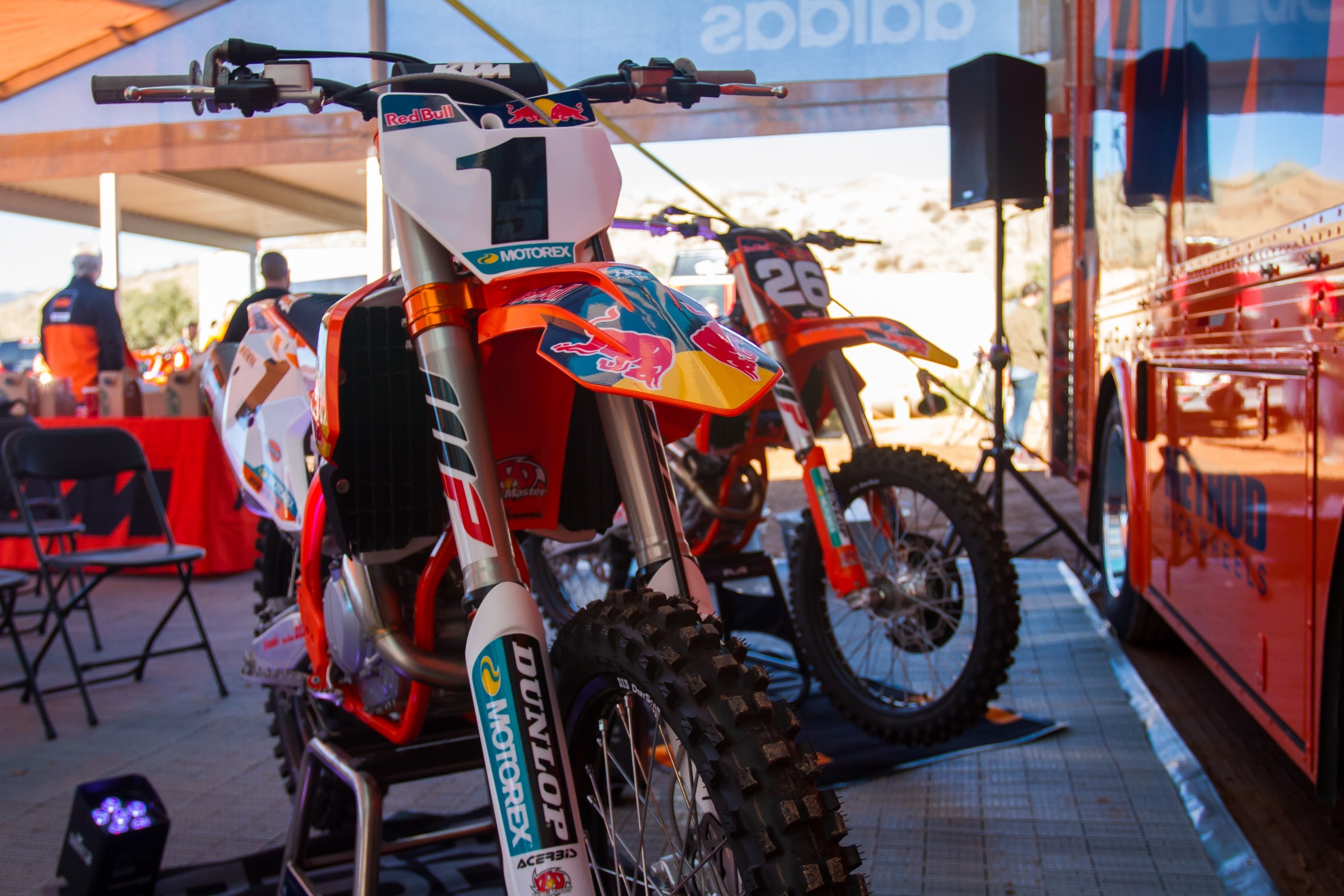 Anaheim 1 is only five weeks away, which means preparations for the 2017 Monster Energy Supercross season are in full swing. Tuesday, KTM held an event at their supercross test track in Corona, California, to introduce the media to the 2017 Factory Edition 250 SX-F and 450 SX-F, as well as the riders for Red Bull KTM Factory Racing, Rocky Mountain ATV/MC-KTM-WPS, Troy Lee Designs/Red Bull KTM, and the Troy Lee Designs/Red Bull KTM amateur team. If you haven’t already seen what’s new with the Factory Edition bikes, you can check it out here.

There was quite the turn out from the industry which included many of the media outlets, previously mentioned teams, and the riders’ gear companies. With an event like this, it is crucial for sponsors to be represented well. They make sure every rider has the right helmet on, the lens colors are correct, the boots are clean, and everything else has been given some extra polish. KTM even had its track completely rebuilt for the event. None of the riders had touched the new layout, so it was cool watching everyone test out the rhythms and discover the fastest lines just like the first practice sessions on Saturday mornings during the season.

With the rain Southern California got over the weekend, the conditions couldn’t have been better. There were two 450 sessions and two 250 sessions with everyone mingling throughout. KTM even brought a The Taco Man to the track, but I was a little preoccupied grabbing interviews and taking pictures one handed thanks to my currently broken wing.

So who’s on each team for 2017? We’ll run down the gauntlet in case you’ve forgotten.

Our old friend, and former GNCC employee, Jen Kenyon, who is now a public relations specialist at KTM, hosted the day’s events as well as introduced all the teams. The biggest announcement, which was also made a few days prior, was the addition of an amateur program to the Rocky Mountain ATV/MC-KTM-WPS team. Max Markolf—who is currently an Orange Brigade rider—will be filling that single spot through 2018. Max is currently recovering from an injury sustained while practicing supercross in September, but will be racing some arenacross next year before making his official debut with the team at the Ricky Carmichael Daytona Amateur Supercross. He will pit out of the team semi at that race.

Jessy Nelson was in attendance and was up there with the rest of the TLD KTM team during their introduction. It was great to see Jessy smiling. As you probably already know, Jessy suffered a spinal cord injury at Unadilla this summer, which has left him in a wheelchair and his racing future uncertain. He’s been on a rollercoaster the past several months and if you follow him on social media you can see his varying up and down days. One great update from Jessy was on the morning of Thanksgiving, he was able to move his toes! He has yet to repeat the feat, but that is definitely a good sign. I can only imagine the angst Jessy must have been feeling wanting to be back on the track with his TLD teammates. As bummed as I am for Jessy, he seems like he’s in a much better place than when I saw him at the MOTO 8 The Movie premiere in October. Hang in there, Jessy. Gary Bailey and Road 2 Recovery have setup a private motocross school training session on Friday, December 9, to help raise money to get Jessy the sprinter van he needs. This all-star riding and coaching session will feature Cooper Webb, Ivan Tedesco, Kris Keefer, Grant Langston, David Bailey, Gary Bailey, the complete TLD team (Tyla Rattray, Shane McElrath, Jordon Smith, Mitchell Oldenburg) Jessy himself, and many more. Check it out here.

I spoke with Blake Baggett for a few minutes. He is looking comfortable on the KTM having recently switched from Yoshimura Suzuki. Blake missed seven rounds this summer with collarbone issues. Both of his collarbones are plated and Blake unfortunately had to abandon his Leatt neck brace due to the location of the most recent plate, which rubs and causes a lot of discomfort. Blake even sounded like he had his mind made up on doing full collarbone replacements because his collarbones are so bad.

Next year will be Benny Bloss’ second season (first full season) with Rocky Mountain ATV/MC-KTM-WPS. Benny was named Rookie of the Year last summer in Lucas Oil Pro Motocross on a 450, but he’ll be riding a 250 in supercross before hopping back on the 450 for outdoors. He is currently living in California for training, which he isn’t too stoked on, being that he’s from Missouri. What isn’t he so stoked on? All the congestion and having enough space from one neighbor to another.

I also spoke with Red Bull KTM members Marvin Musquin, Ryan Dungey and Trey Canard. Dungey is returning after missing all but three rounds of the 2016 Lucas Oil Pro Motocross Championship. It’s the most significant amount of time he’s missed in his career. While he certainly didn’t want to miss an extended period of time, Dungey did say he feels refreshed.

“I hadn’t had two months to let my body heal like that in a long time, in ways that I probably don’t even know how. But it was good as we were healing up not to have any side effects from the neck injury or anything. I was able to heal it and not rush back into it and take my time getting ready for this season.”

We’ll have a full interview with Dungey next week.

After 10 years with Honda, Canard moved to Red Bull KTM this off-season. He looked great on the track Tuesday, and said the change has been coming along well.

“When I came to KTM I had about two months off the bike, so it’s hard to really compare apples to apples. It was a little different. I think just for me I was with Honda for so long, now it’s just a whole new can of worms for me. It’s been a lot of fun. I’m really enjoying being around the whole KTM family. It’s been a good experience so far.”

As for Musquin, he’s been the busiest of the team members this off-season, racing the Monster Energy Cup, Red Bull Straight Rhythm, Bercy-Lille, the SMX Cup and Geneva Supercross this upcoming weekend. He says it’s good to have the success he’s had, even if it’s off-season races.

“It’s good to do good at any kind of races, even if it’s off-season,” he said. “Even if we had a break and not everybody is prepared just like for A1, but it’s good to do good. I’m looking forward to a new season and one more race in Geneva this weekend for us.”

There was lots of action throughout the day and the season is only 37 days away. If you missed it, you can check out the gallery of the all the KTM boys here.