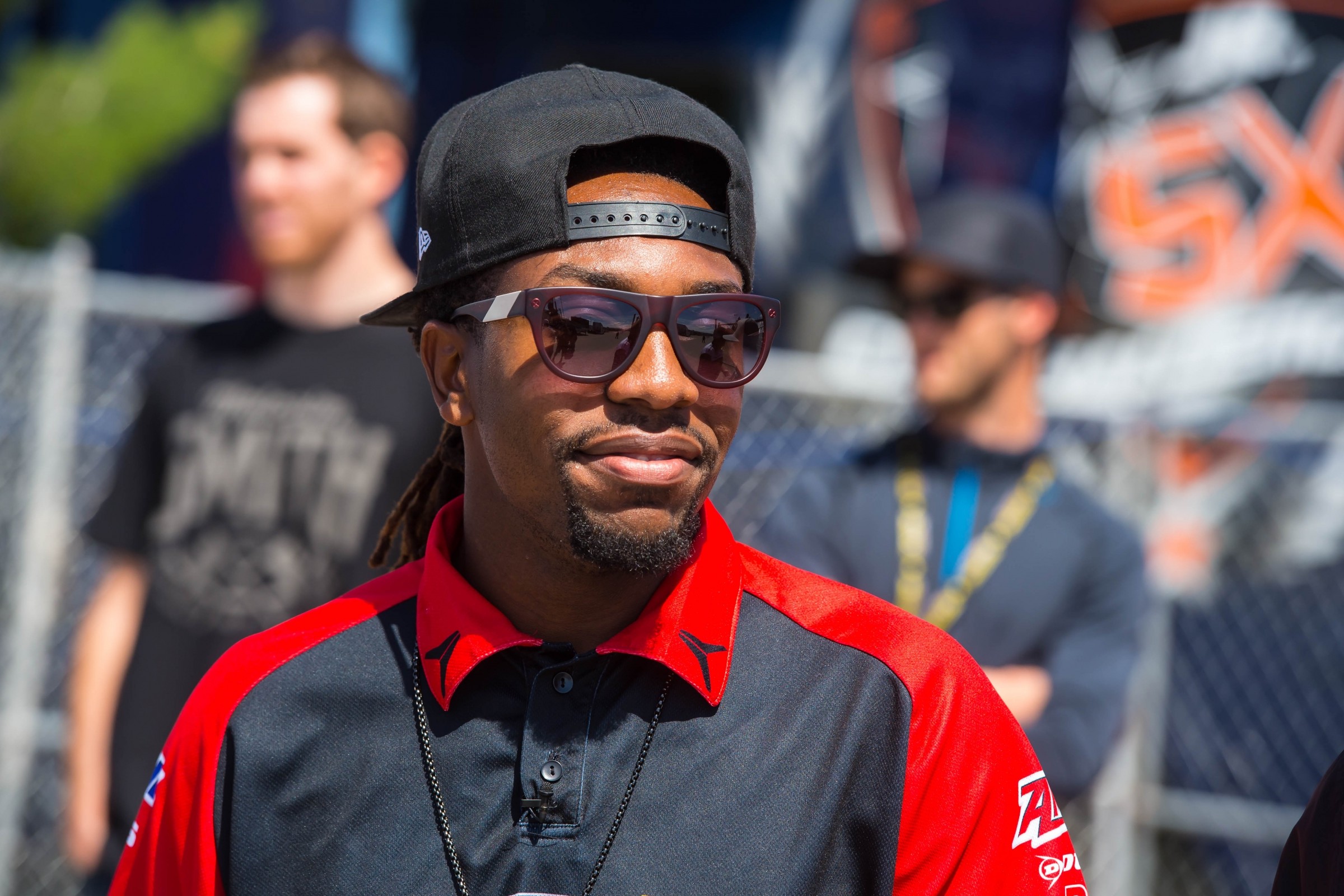 Malcolm Stewart is one of those riders caught in the current off-season vortex, AKA a perfect storm of crappiness. Stewart, winning the 2016 250SX East Region for GEICO Honda, hoped to get a factory 450 ride for 2017 and be on his way, but unfortunately we’re nearing December and he still doesn’t have a deal. Steve Matthes caught up with Mookie last weekend at the Bercy-Lille Supercross to talk about this frustrating off-season, what’s next, and what the plan is for Anaheim 1.

By the way, this interview was recorded before Malcolm was spotted riding a Yamaha a few days ago, however, Malcolm was already indicating that when he goes racing, it probably won’t be on a Honda. “As of right now whatever is going to help me out the most,” he says. “I feel that I do not have enough parts to go racing on a ’16 [Honda]. The only thing I can think of is going to maybe Kawi or Yamaha, somebody that doesn’t have as much manufacturers out on the track. That’s kind of where I would go.”

Let’s see what life is like for Malcolm Stewart as 2016 begins to close.

Racer X Online: More so than about this race (Lille SX), everyone’s talking about your situation for next year. You don’t have anything right now. What’s your plan?
Malcolm Stewart: As it sits right now my plan is to still show up at Anaheim 1. Clearly all the factory teams are taking riders so my goal is to figure out what bike I want to get and see if a team is going to give me some factory help or anything like that and show up in the sprinter van and do good and go from there. The sport is dangerous as it is so riders get hurt, so there will be a spot open somewhere between the first round and the last round, but whenever that opportunity does come up I just take that spot and just make a good impression and hopefully I can earn myself something for outdoors and then the whole season in 2018.

If somebody comes up between now, mid-November, would you take it? Are you still talking to anybody?
The sprinter [van] plan, that’s just I would say is the backup plan. The goal is obviously for somebody to call me. I don’t wish anything bad on people by any means or anything like that, but who knows? The opportunity could show up with Factory Kawi, KTM, whatever. I would take that chance.

We’ve saw some posts with Crossland Racing lately. Is there anything to that with you and your brother?
The first tag I got on that, all of a sudden it just blew up out of nowhere—I don’t even know who the guy is. Personally I’ve never talked to him myself. If that opportunity does come up I would like to talk to that guy then. Honestly, whoever it is that keeps posting it, please call me. Let’s make something happen then.

How close were you with making something happen with anyone? GEICO Honda was trying to make you happy. I know from talking to those guys they wanted to make it work. Were you close with anybody else with having a ride?
With the whole GEICO situation, it was going good but I think some things kind of came up. Also Jeremy Martin kind of moved over there, so that kind of took a little bit of the budget up for them. I personally think with the whole thing that happened with not only that Ken Roczen jumped over to Honda but the whole big earthquake kind of stopped and slowed everything down as far as manufacturing parts and things like that, so I think that kind of hurt the chances of me doing a Justin Bogle-type deal [Bogle rode a GEICO Honda 450 in 2016]. So I think that kind of hurt me. There’s always different answers I was getting each and every week. They (GEICO) tried to put me straightforward but they were getting different answers every week and was just passing it along. It just got to a point where we’re so deep in the field now that Anaheim 1 is so close so it’s kind of hard to try to restart everything now.

You won the 250 championship and don’t have a ride. How’s the bitterness? How’s the mental health doing? Is this something where you wake up every day and curse this industry a little bit? Or are you accepting of it?
Honestly I just think it’s a weird year for everybody. My personal goal was to win the championship. That’s a huge positive thing. It’s in the history books. Every day that I wake up I know that that was my goal and I did it, I achieved it. Now the whole not having a ride and things like that, the way I look at it, I just wasn’t good enough. It is what it is. There’s plenty of football players, basketball players that just don’t get picked. That’s just the way life goes. I’m not going to hold my head over it. I’m going to keep moving forward. That’s the way I look at things. It is what it is. I’m not bitter at it but I’m not going to hold my head down over it. It sucks but at the same time what would suck more is having a broken femur or something like that. I could be not walking. It’s a job. It’s a money sport, but life goes on.

We’ve seen guys like Dean Wilson and Jake Weimer, they have nothing either. Bogle and [Broc] Tickle we think are going to go to RCH but that’s not announced yet. It’s been a weird season for some very good riders.
I feel that I’m not the only one in this situation either, so that’s positive on my side but negative on everybody else. There’s other great riders that had potential, have won championships that are in the same situation. I guess I would say the way I look at it I’m not the only one. Hopefully we all get a big sprinter van and show up. We can all get together and split gas the first six rounds!

How much do you think not doing outdoors hurt you?
My personal opinion, honestly, I love outdoors. I’ve never had a problem with outdoors. The situation I was put in, riding a 250F only on a supercross only contract, I would have been riding for free outdoors. Coming off of winning the championship, no. I am glad I sat outdoors out. I don’t think it hurt me, but if anybody else was in the same situation coming off of winning a championship to going back to kind of not having an option … people can look at it both ways. Some people say, you’re being lazy, whatever, it doesn’t matter. I’ve raced outdoors a lot. I’ve proved myself. I got third and stuff like that. So it’s not that I’m just slow, it’s the situation I was put in. Two years ago I was sick. I will totally admit that. That was my fault. But I haven’t had any sickness problems since then, it’s just been a bad situation.

I think there’s a misconception that you don’t want to do outdoors. If you got hired tomorrow for a 450 supercross/motocross you’re fine to race motocross?
Yeah, if I was hired full-time it wouldn’t be an issue. Riding a Lites bike in outdoors, the original contract was only a supercross-only contract. There was no talk about outdoors. I did absolutely no testing outdoors. The team didn’t even say anything about me and outdoors, so the team knew that. Me and the team and the bosses, everybody knew that. The public didn’t know that. So sometimes it’s better to keep your mouth shut. I don’t want to bash the team by any means. Me and the team are cool and that’s why they’re still helping me out to this day because they know the understanding of it.

If you show up at Anaheim in a sprinter van, you would be on a Honda ‘16 model? Would you be on a Honda ’17? Will you change bikes if you want to as of right now?
As of right now whatever is going to help me out the most. I feel that I do not have enough parts to go racing on a ’16 [Honda]. The only thing I can think of is going to maybe Kawi or Yamaha, somebody that doesn’t have as much manufacturers out on the track. That’s kind of where I would go.

I feel like a pimp. Picking what I want to ride.

We’ve seen you over here (Europe) a bunch the last few years and it seems like you love coming over here. Obviously there’s money in it for you but I think the fans like you, you enjoy talking to the fans. I think you’re a little bit of a fan favorite over here. You like these European races.
Yeah, it’s not bad. Honestly I don’t really look at it just only racing. I look at it more like a vacation experience. I’m always snapping photos. I guess the way I look at it I always wanted to travel the world, so that was always one of my dreams as well. So why not do it including racing? So that’s the way I look at it. It’s not all about a paycheck but if you get a free flight, why not take it?