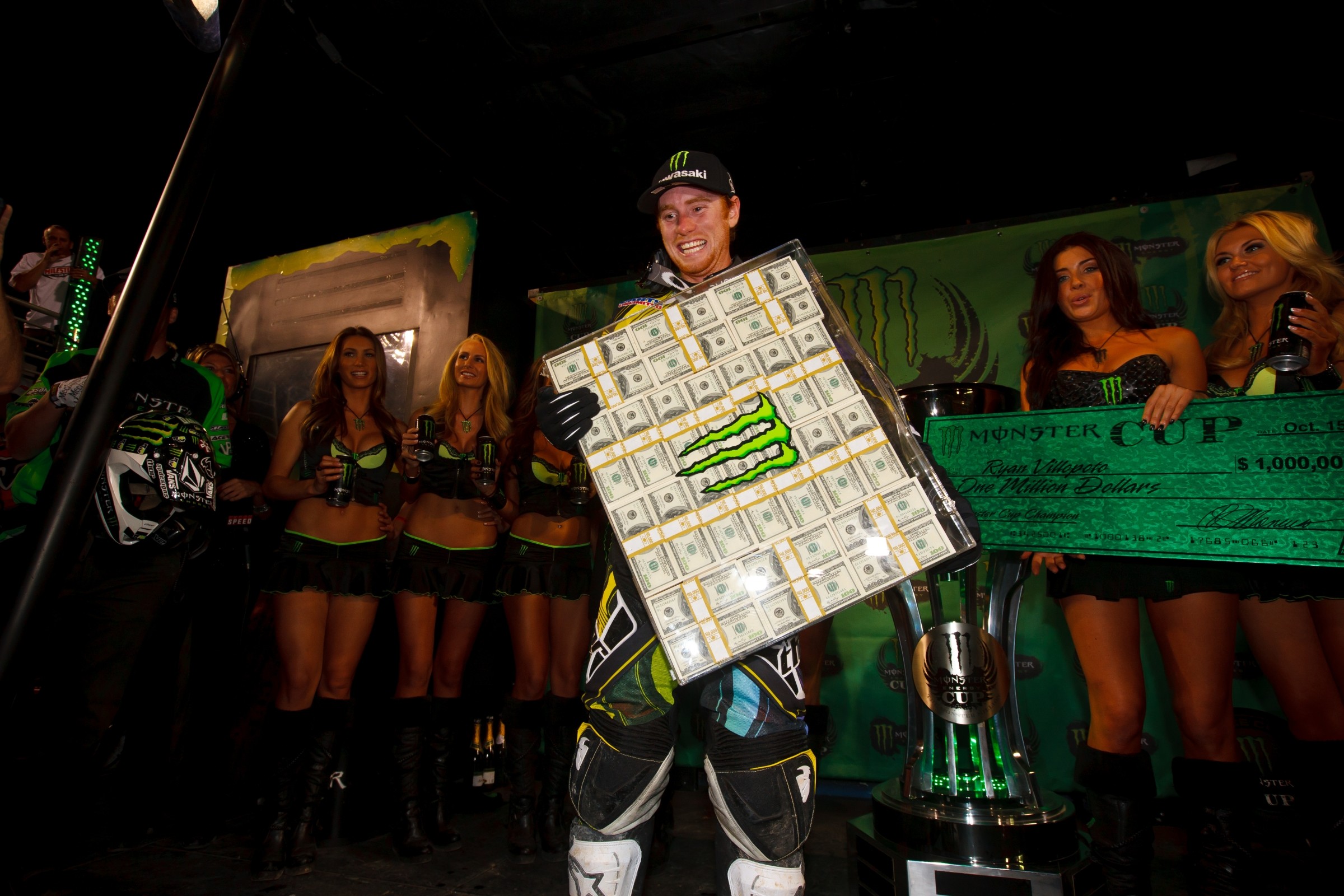 This weekend, the Monster Energy Cup rolls out for its sixth consecutive year at Sam Boyd Stadium in Las Vegas, Nevada. There’s been a ton of great moments since Feld Motor Sports revived the off-season race, so for this week’s The List, we’re looking back at some of the bigger ones.

Have any moments that stand out to you? Leave them in the comments below.

Ryan Dungey Debuts with KTM in 2011

Today, six years after the defunct U.S. Open was brought back to life by Feld Motor Sports (promoters of Monster Energy Supercross), it’s no surprise to see the top riders compete in the event. That wasn’t always the case. In 2011, the first year of the Monster Energy Cup, big names like James Stewart, Chad Reed, and Justin Barcia had all dropped from the event, and 2010 AMA Supercross Champion Ryan Dungey wasn’t expected to race either, as he just moved from Suzuki to KTM on October 1—two weeks before the event. But in a surprise announcement a few days before the event, Dungey decided to lineup. The decision even surprised team manager Roger DeCoster.

"We didn't expect him to race after only two weeks on the bike," DeCoster told ESPN. "But he will use the event to help gauge where he stands speed-wise against the competition. It will also give the team a racing opportunity to test different setups with the bike prior to the opening round of the Supercross."

Dungey performed well, finishing second overall with 3-2-2 scores, but he was no match for Ryan Villopoto.

In the first year, Ryan Villopoto, who’d already won the 2011 AMA Supercross and Motocross titles, dominated all three main events—grabbing two of the three holeshots—on his way to $1 million.

After the race, Steve Matthes asked what he was going to do with his earnings:

Steve Matthes: What are you going to spend the money on?
Ryan Villopoto: Black #2.

As a poor journalist, no. That’s not a good idea. You should invest that in a high yield bond.
Woah! Woah!

Since RV’s run away, no other rider has captured the Monster Million, but there was a close call.

Three years after Villopoto claimed the Monster Million, then factory Honda rider, Trey Canard, nearly did the same. Canard won the first main event wire to wire and then capitalized on Davi Millsaps’ mistake exiting the Joker Lane in the second main event to take a second win. Canard, who grabbed both holeshots, also had a chance to win a Toyota Tundra.

Things starting going wrong for Canard right away in the third main event when he got bumped off the start and didn’t nail the holeshot, which cost him the Tundra. He still had a chance at the Monster Million as he started to catch Millsaps for the lead. But then everything came unraveled. Canard went down in Monster Alley entering the stadium, essentially ending his chances at the $1 million. He still had a shot at the overall, though, and $100,000. After remounting, he started charging through the field, but fell for a second time, giving the overall and $100,000 to Millsaps.

"It was in the back of the mind (the money), but I wanted to go in there like any other race," said Canard. "It's so good to see Davi back and race against him. I'm just thankful to be healthy and this gets me excited for Anaheim."

A few months later, Canard joked that it seemed like everyone in his family had already thought about how they would have spent the million!

The first of many Joker Lane gaffes came in 2013, when Ryan Dungey thought he’d won the first main event over Ryan Villopoto. Well, Dungey forgot one crucial thing—taking the Joker Lane! Villopoto informed Dungey of his mistake shortly after, leading to this unforgettable moment:

Recently Dungey told Supercross Live, “I don’t like that thing,” while looking back on the 2013 edition.

Right after informing Ryan Dungey of his blunder, Villopoto made the same mistake in the very next race! In arguably the greatest battle in MEC history, Villopoto and James Stewart squared off in an epic duel. The two traded the lead—and some paint—several times before Stewart ducked into the Joker Lane on the final lap while Villopoto cruised by. Villopoto forgot to take the Joker and in the next rhythm section suffered a huge get-off giving Stewart the win. Villopoto would be okay, but wouldn’t line up for the third main event. Stewart would go on to take the overall.

One cool thing about the Monster Energy Cup is that it allows regular 250 riders to get some time in on a 450 at a low-key event, on a tamer track. But no one expects these riders to win, right? Well, it almost happened in 2014 as Justin Hill stepped up to the 450 for Red Bull KTM.

Hill finished second to Trey Canard in the first two mains and would have had a chance to clinch the overall after Canard had his problems. But, Hill never got the chance as he went down hard off the start and finished 18th. Still, it an impressive performance from a 250 regular.

Hill isn’t alone in making a splash at the event. Justin Barcia signaled his arrival to the 450SX pack by winning the overall in 2012, three months before his full-time 450SX debut. That same night, Eli Tomac won the final main event of the night on his GEICO Honda 450. Tomac was still scheduled for another full season of 250 racing! The next year, Ken Roczen went down to the wire with Stewart to try to win the overall. Roczen’s full-time 450 debut was also a few months away.

The third main event at last year’s Monster Energy Cup featured a scary moment for Canard. At the end of the first lap, he was following Jason Anderson out of a corner prior to the finish line when Anderson went in a different direction than Canard was expecting. He clipped Anderson’s back wheel and went flying into the team manager’s tower.

“It wasn’t good for sure. It just happened so fast,” Canard told us. “I just slowed down to try to pass [Jason] Anderson, and he was heading a different direction than I anticipated. It’s definitely scary, but I’m happy I got up.”

After a runner-up finish in his KTM debut in 2011, Ryan Dungey was one of the favorites a year later at the second Monster Energy Cup. But his night—like so many at this event for Dungey—started out in a bizarre way. While battling with Ryan Villopoto in the first main event, Dungey bent his shifter on a Tuff Block. Unable to shift with his boot, Dungey, while in mid-air, literally reached down and shifted, getting his bike into second. He rode the rest of the main that way en route to third. He finished second overall that night.

In possibly the most bizarre coincidence ever, the same exact thing happened to Dungey in the next main event!

You can add another dumbass to the missing the joker lane list! Haha #cassicmixup

The night wasn’t a complete wash though, as Anderson nailed three consecutive holeshots, becoming the first rider in the history of the event to pull all three and win the Toyota truck. The strange part is, Anderson ended up struggling with starts for a lot of 2016.

For a few years, the event experimented with a split start, with two separate starting gates that were guaranteed to fall at the exact same time. Then the riders would funnel into the stadium in two packs before hitting the start straight together. In 2012, the very first shot with the split start, one gate dropped and the other didn’t. Josh Grant grabbed a holeshot that was quickly red flagged and restarted.

The split start returned for 2013, and so did the gate problems! In fact, this time there were two malfunctions! In addition, even when both gates did drop, James Stewart went to social media to point out that one gate seemed to drop a split second before the other.

After that, the starting gates came back together, and the split came after. Consider the split gates a classic Las Vegas scenario—it seemed like a good idea at the time!