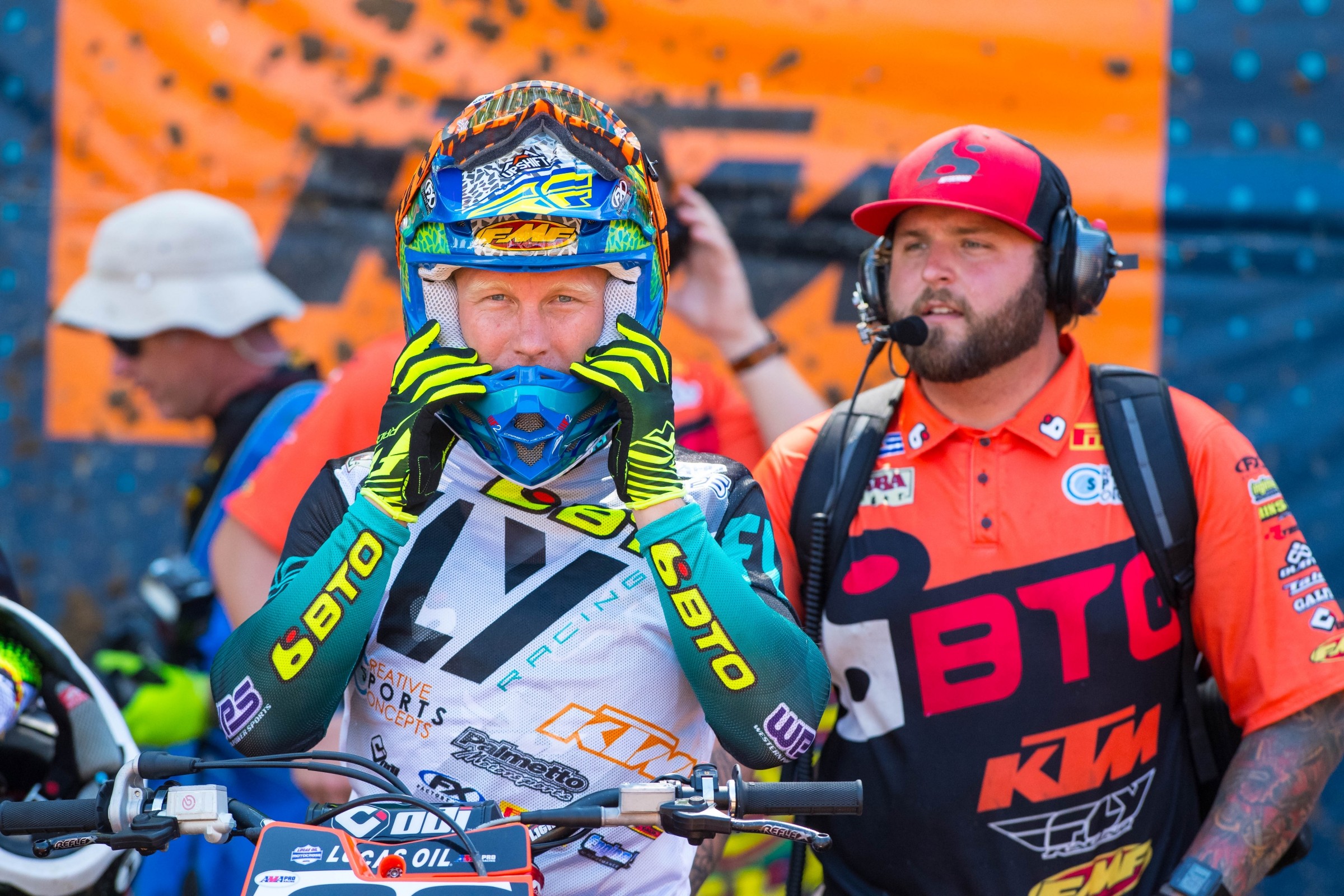 Andrew Short wrapped up a long and successful career on Saturday at the Ironman National. In seventeen years as a pro, Andrew was able to constantly reinvent himself as new techniques emerged. This is a recurring theme for veterans as each generation continuously ups the ante for speed and innovation. There simply is no place for a rider who is unable to constantly elevate his game. Andrew was able to battle on 125’s, earning himself a factory ride during the infancy stages of the Honda 250F. He would turn that success into a long tenure with factory Honda on their 450, becoming a podium mainstay. His consistency was matched only by his tenacity, even earning the most overall points in 2008 when combining the supercross and outdoor seasons in a Grand Champion type scenario.

In more recent years, he would embark on a new relationship with KTM, helping with development on several aspects of their current race program. Spending a year on the 350, working to accelerate the progress of the new-gen 450 and even spearheading the WP air suspension project are all things that Shorty can check off his resume.

To say his career was well rounded would be a monumental understatement. He has won races all over the world, including Europe, Japan and the United States. He was nearly unstoppable on a 250F at Bercy. He won the Motocross of Nations for America in his home state of Colorado in 2010. He has won supercross races and outdoor races worldwide, delighting fans and terrorizing rivals. As great as he was as a racer, even more impressive is who he still is as a person.

Here’s a challenge: go find someone who has a negative thing to say about Andrew Short as a human. I’ll wait. Riders, team personnel, fans and casual onlookers alike will all have the same general opinion of Andrew. The guy simply does it the right way. He is gracious to everyone. He speaks genuinely and honestly. He appreciates his sponsors. He is selfless with those who want a moment of his time or his help. From my own perspective, I’ve seen Andrew deal with everyone the right way from many perspectives. I’ve seen it when racing him, I’ve seen it in my side career as a moto journalist, and I have seen it as a sponsor.

If you want an example of how it’s done in every situation, just sit back and observe Andrew Short. He is the rider that parents should tell their children to emulate. He is the spokesman that companies pray they can endorse. He was and is the total package. That’s what makes his racing persona so fascinating.

Andrew Short may be the one rider who I would not want behind me on the last lap of a race. Okay, maybe Vince Friese would be tough to overlook but Andrew’s ferociousness on the track was legendary.

James Stewart coined the term “smiley-faced assassin” when referring to Andrew for exactly this reason. Andrew would be smiling on the outside but his race face was snarling teeth and white-hot aggression. I have seen him absolutely go for the jugular when making a pass and I have seen him retaliate with unbridled scorn.

In 2006, I got a taste of it myself in untimed free practice at Thunder Valley. We were in different classes, Shorty still in the 250 class and myself on the 450. The seeded practices were combined in those days and as he came to pass me, I must have gotten in his way or accidentally roosted him. As we came down one of the hills, he got to my inside and punted me off the track, through the banners and into the parallel section of the course. Once I realized what happened and who sent me into the next county, I decided to pay Andrew a visit at the Honda truck. Being a Honda supported rider myself, I fought off all urges to raise my voice, but I did have to ask for further explanation.

Coming right off the track, Andrew’s face was still cold with intensity. As he realized what I was mad about and how it had gone down, I visually saw his face soften and change back to the Andrew that everyone has known for years. It was a complete transformation and we talked it over calmly and like adults. The initial anger in the moment was washed away as I saw Andrew realize it probably could have been avoided and true to form, he apologized for the incident. Just another passing moment for Andrew, but for me, it really defined how I thought of him.

Andrew is one of the most aggressive, hard-nosed racers I have ever been around and yet also one of the most compassionate, kind-hearted people I have ever met. Has there ever been such a sharp contrast in a racer? He has the race intensity of Damon Bradshaw but the off-track persona of the Dalai Lama. He is yin and yang. His helmet is a light switch. With a helmet on, he is unrelenting, with his helmet off, he is warm and inviting. He was able to channel both John Lennon and John Cena, able to turn it on and off at will.

As a racer, his approach is what I will remember most. He was ruthless in his competitiveness. He was always prepared and if anything, trained too much at times. I can remember Nick Wey telling me in the off-season of 2003 that Andrew was doing five 20 lap motos a day. He was making all of the other Suzuki riders insecure because he was overdoing it on a Herculean level. He brought professionalism to every program and left with genuine gratitude. He was a pro’s pro, rewriting the script for many that came after him. It’s no wonder teams always tried to keep him under their tent. With so many riders burning bridges and leaving frustration in their wake, he was the shining example for how situations should be handled.

Now Andrew is moving on, transitioning into the world that I find myself in. Post-racing life is a big change. He will search for ways to satisfy that competitive urge that racing always quenched. He will wake up and wonder how to replace the drive that he has felt for his entire life. His goals will change, his motivations will shift, and above all else, he will reflect. He will reminisce about past races, both good and bad, reliving those emotions. The blood of a racer never fully accepts that it’s over. Somewhere deep inside every retired racer, that competitive spirit churns every time they watch the sport they love.

If he’s anything like me, his stomach will get restless during opening ceremonies at Anaheim 1 out of sheer habit. His heart rate will go up when the 30 second board is raised. He will be on the edge of his seat during every lap of the race and wonder where he would fit into the results had he lined up. If he’s anything like me, he will head home and stare at the ceiling for a long moment, memory after memory flooding his mind. Andrew should rest easy, though. His mind should be flooded with memories not only of his success, but of the smiles he put on so many faces. The memories of kids he forever imprinted with his generosity. The memories of adults that grabbed their child, pointed at Andrew and said, “Hey, you see that guy right there? Do it like he does.”

The memories that will live on long after people remember his talent on a motorcycle are the ones that impress me the most. His ability on a bike is only surpassed by the quality of the man we know off the bike.

Thanks for the memories, Andrew. It’s been a pleasure to witness.