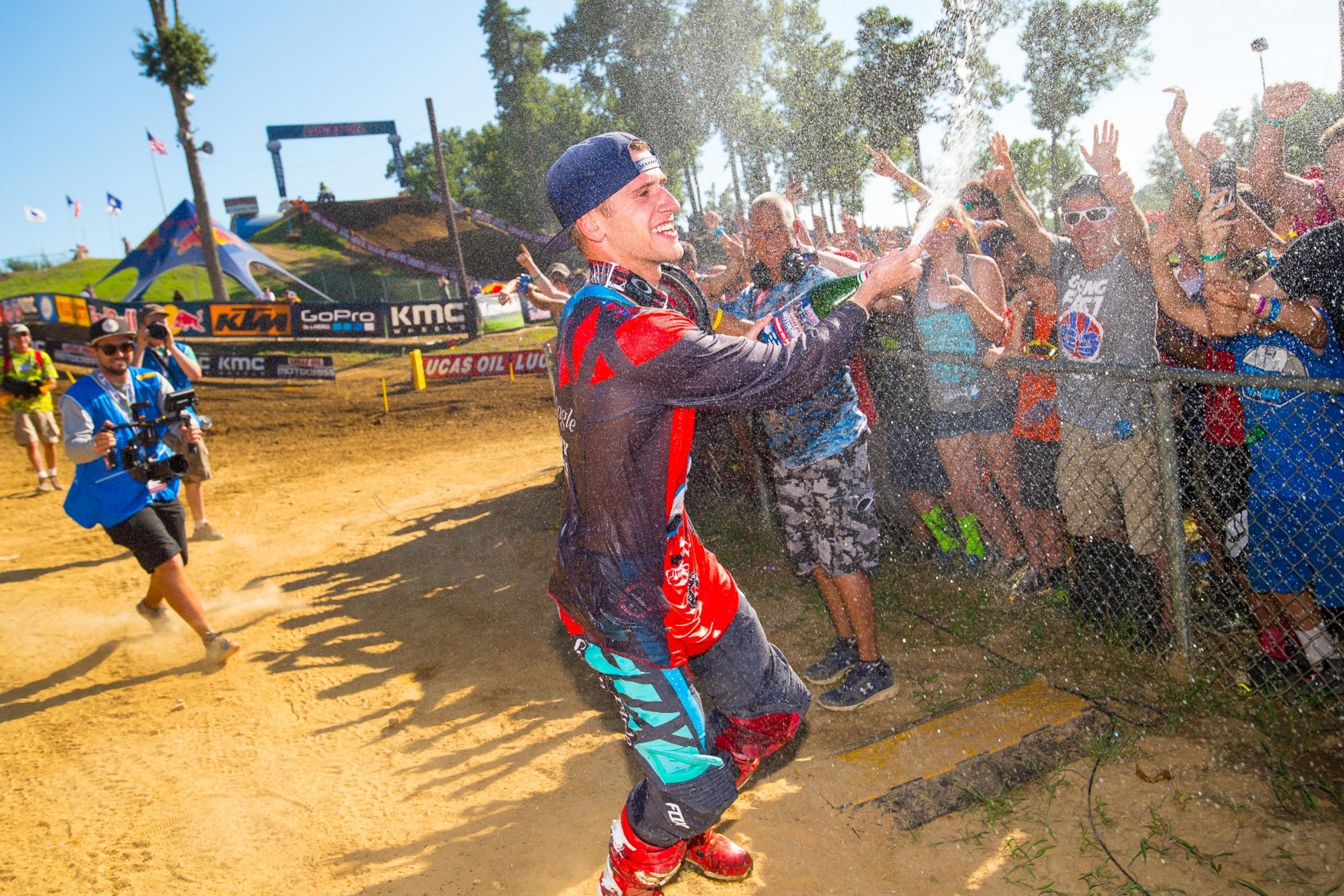 After dominant seasons where they led their respective classes in every major statistical category, Ken Roczen and Cooper Webb came into Budds Creek on the verge of the 450 and 250 championships, respectively, in Lucas Oil Pro Motocross. But while their huge points leads made the titles seem like an easy clinch, it’s critical to remember that odds were once stacked against each of them. That made these title clinches extra special to both.

Let’s start with Roczen. A rough 2015 title defense in his first go-around with Soaring Eagle/Jimmy John’s RCH Suzuki left many questioning his decisions—leaving the Red Bull KTM team he won the 2014 title with, and leaving renowned trainer Aldon Baker. But his 2016 season, a dominant one, left him with just one thing to do at the post-race press conference. When it was done, Kenny picked up the microphone, and then dropped the mic.

“Any championship is great, but we had some struggles in 2015, and we turned it all around to the positive,” said Roczen, who showed up at the press conference shirtless and drinking a Coors Light (!). “I didn’t quit on them and they didn’t quit on me. I’ve got to give it up to those guys, because we are having so much fun together. We have a saying in Germany that the first one is easy and the second one is the hardest one. There’s nothing more I can ask for than what we’ve accomplished this year. We communicated so well this year and it was so much fun.”

The championship is also the first for the Soaring Eagle/Jimmy John’s/RCH Suzuki team, which is co-owned by Carey Hart and Ricky Carmichael. It’s the first time a privately owned team has won a 450 outdoor championship.

“There were a lot of bandwagoners out there, I’m sure after last year they were saying I should have never switched, I would be pretty much done, I should just retire,” said Roczen. “I don’t really care what the coach potatoes say, but I’m sure there are a lot of people who are probably jumping ship.”

How good has Roczen been? In 11 races, he has eight overall wins, eighteen moto wins (of twenty-two), eight 1-1 performances, and 294 laps led. Roczen entered the weekend 63 points clear of Monster Energy Kawasaki’s Eli Tomac, and while he didn’t need a 1-1 performance to solidify the championship, he went out and dominated the field, leading all thirty-four laps on the day. Roczen was never challenged in either moto. As we’ve seen so many times from him this season, Roczen was aggressive from the get-go, taking command early in each moto. He won the first moto by the tune of sixteen seconds and the second moto by twenty.

Last year, Justin Barcia used a muddy Budds Creek to turn his season around. Although conditions were much different today (hot, dry and humid) the AutoTrader.com/Monster Energy/JGR Yamaha rider was a solid third in each moto to take second overall.

“I made dirt bike progress today,” said Barcia. “After practice I said I need an engine change, a sprocket change, a fork change and a shock change. I was sick of beating around the bush, I wanted to go for it. So we went into the motos blind but I feel like we went in the right direction.”

To get second overall, Barcia had to fend off Marvin Musquin, who got the better of him at Unadilla. Marvin also caught and passed Barcia in moto one at Budds Creek, but Barcia rode to the limit to hold him off in the second moto. Barcia said the second moto push—Musquin trying to catch him, and him trying to hold him off—was one of the gnarliest battles he’s had in a long time. Barcia put in a hard lap late in the race to stall Musquin’s charge. The duo showed good respect toward each other for the effort.

Musquin racked up another podium today with third behind 2-4 moto scores. The 450 rookie has made huge strides in his first season, and has quietly moved into third in points, forty-nine up on Barica.

“I was happy with the first moto to get around Barcia and get second but the second moto didn’t end up the way I wanted it to,” Musquin said. “I thought the second moto was going to be the same as the first so I was trying to be patient, follow Barcia’s lines and make it happen at the end but I wasn’t able to. He was able to push at the end. I’m a little disappointed but to end up third overall was good.”

A tough day for Eli Tomac, who crashed with Ronnie Stewart in the first moto (Tomac actually helped get Stewart’s bike off him before continuing) and could only work back to sixth. Tomac was much better in the second moto, but his start didn’t offer him a chance to challenge Roczen for the lead. Tomac rounded the first lap in sixth and once he worked into second (lap 4) Roczen was already long gone. He finished fourth overall on the day.

In the 250s, Cooper Webb entered the day with an 81-point lead, making the championship a virtual lock. But he added a little drama when he got a bad jump in the first moto and ended up down on the ground, and then crashed again on the first lap. From there Webb says he told himself to calm down and chill out, and he was happy that, on a track where it was hard to make passes, he made it all the way back for sixth. It wasn’t enough to lock up the title though, so he would have to wait until the second moto. There, he got a bad start again, rounding the first lap in around twenty-eighth. This time he found little trouble working through the field and finished a strong third. That was more than enough to win the title.

The title seemed easy by now, but Webb pointed out some dark days when he first went down with a broken wrist before the Nationals began. “There was a big discussion coming in,” says Webb. “I’ve said it 100 times but, I was sitting there on the couch and I said, “I’m gonna’ win. I’m not just going to sit on this couch and drink beer all summer." I think a lot of people definitely thought I was crazy for thinking that. There were maybe only four people that agreed with me, that was Swaney (trainer, Gareth Swanepoel), my parents, and (Star Racing Team Owner) Bobby Reagan. I told myself last year after sitting there in Indiana and watching Jeremy [Martin] win I just decided I was not going to let that happen again. I just wasn’t going to be denied. I knew it was going to be tough and I wasn’t sure I wasn’t going to be able to do it. I just kept saying, “I want to do it, I want to do it no matter what.”"

The championship is the third straight 250MX title for the Yamalube/Star Racing Yamaha team (Jeremy Martin won in 2014 and 2015), who have come a long way under team owner Bobby Regan.

Webb’s championship will overshadow Zach Osborne’s big day, but we shouldn’t let it. He spent the entire first moto battling with rookie Austin Forkner and ground out a fourth—admitting the heat and the battle took a lot out of him. But that fourth would loom large. In moto two, he was in another battle with Forkner but this time for the lead, and held on to win it. With moto one winner Alex Martin off to a slow start (he eventually finished fourth) Osborne’s 4-1 day was good enough for the overall win—the first of his career.

10 years ago this Budds Creek took a lot from Osborne, as in his rookie season he led the first 250 moto at this track for twenty minutes, only to completely run out of energy and fade all the way back to eighteenth by the end of the moto! Osborne said it felt just amazing and ironic to get his first-ever win at the track that had taken so much away from him. The win spells the end of a rough couple weeks for Osborne and his Rockstar Energy Husqvarna team. He went DNF-DNF last weekend at Unadilla, due to mechanical problems (his third straight race that ended early due to mechanical problems).

“I was telling my parents as I was coming here, I feel like I need to win at Budds Creek before I can win anywhere else,” said Osborne. “To do it here ten years later, it’s just crazy.”

Osborne didn’t realize the overall was his until his mechanic put it on the board on the last lap. Osborne actually thought Adam Cianciarulo had won the first moto (Adam actually finished second) and thought AC was in third, so he expected to lose the overall 1-3 to 4-1. But the first moto winner was actually Alex Martin, who struggled with a bad start, opening the door for Osborne’s win. But Alex was confused, too. He didn’t know he needed to make one more pass to get the overall (he would have had to get Cooper Webb to do it) and said he actually settled in behind Cooper. Then he got the board that he needed one more spot, but it was just as the white flag was coming out, making it too late to make a charge.

It’s funny how things change. A year ago Alex Martin won his first career moto at a rain-soaked Budds Creek, and it was a huge, emotional moment. This time he won the first moto in dry conditions, but simply pulled off the track thinking about backing it up in moto two to win the overall. It’s amazing how far Alex has come. With Joey Savatgy exiting the second moto early, he moved into sole possession of second in points. “It’s been kind of a dream season for me,” said Martin. “Really a huge difference in the reaction when I got back to the truck after the first moto this year compared to last year!”

Another solid day for rookie Austin Forkner, who led three laps in the second moto, before dropping back to second. Fokrner would finish third overall on the day, five points behind Osborne and Martin.

Adam Cianciarulo was the early leader in both motos (he led eleven total laps on the day) but wasn’t able to close the door on a moto win. He went down late in the first moto while leading and although he made a late charge to retake the lead, he couldn’t make anything stick. After leading four laps in the second moto, he fell back to fifth. Still, a fourth overall is a positive.