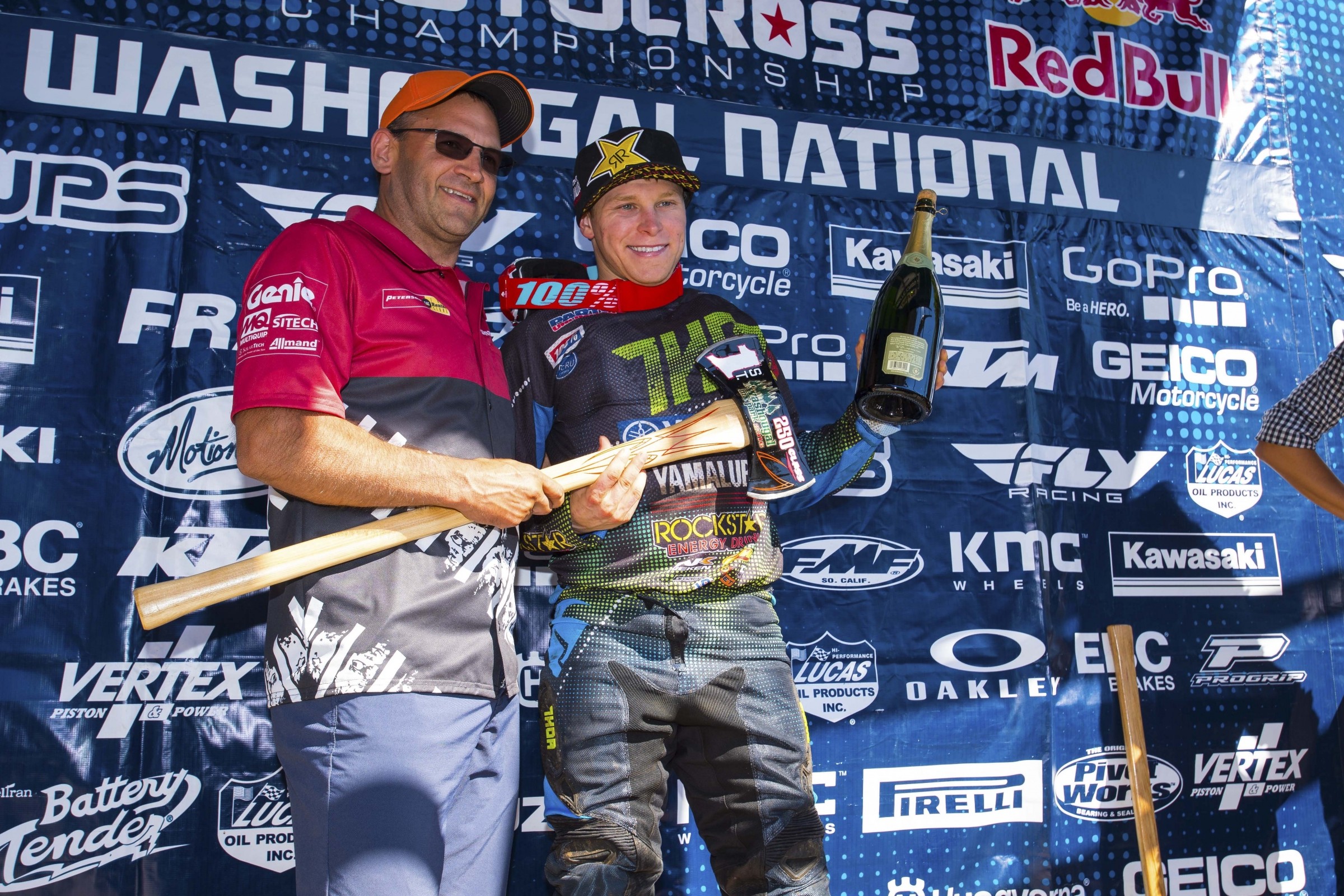 Have you ever theorized about what’s going through a rider’s mind at a specific moment in time? Well, it’s the same for us here at Racer X. The only difference is we actually get to go ask the rider what he was thinking about before or during a race. And after Alex Martin went 1-2 at Washougal, we had plenty of ideas about what might have been floating around in his head. But were we right? We wrote down our answers first, then dialed up A-Mart to see how close, or far off, we actually were.

1. What were Alex Martin’s goals coming into Washougal?

Aaron Hansel: No disrespect to A-Mart, but he’s never really killed it here before. In fact, his best finish at Washougal before the weekend was eleventh overall, so I don’t think I’d be out of line to say he wasn’t coming in with a “must win” attitude, despite the bitter taste left in his mouth from crashing in each moto at Millville. Yeah, he’s the best he’s ever been this year, but judging by his 17th, 13th, 16th, 12th, and 11th overall finishes in years past, I’d bet he came in simply looking for a top five.

Chase Stallo: Winning a dang moto! I’d be shocked if he said anything different. A-Mart has been on the cusp all season, and probably should have a few moto wins already. Through Spring Creek Martin had led forty laps in the class. For comparison, Cooper Webb led just five more laps but had six moto wins to Martin’s zero.

Alex Martin: I don’t think I set any goals coming into Washougal, I’ve just been taking it weekend by weekend so far. For me, based off how I rode at Millville, to lead that many laps in front the hometown crowd only to tip over with a couple laps left, more than anything I was just pissed and wanted some redemption. I felt like I kind of threw away a big opportunity at Millville, so for me it was about redeeming myself at Washougal. But it’s not really my kind of track either, so as much I wanted to go 1-1, at the same time I was like, ‘Well, let’s just keep it on two wheels.’ It’s a notoriously slick track and it’s easy to have a crash so you have to be smart and not hang it out too much because you don’t want to be on the ground and miss the rest of the series. So if I were to have set a goal, it would have been to try to get as many points as possible, especially on Joey [Savatgy] and Jeremy [Martin].

2. What was going through Alex Martin’s mind while leading the first moto?

Hansel: He's had some problems with weird luck and tip overs this season while leading, which makes me want to say he probably had that on his mind, but somehow I doubt it. I mean, Savatgy was all over him like Monster logos on a supercross track! How can you think about anything other than twisting the throttle when you’re under that kind of pressure? Heck, I can’t even remember my own birthday when I’m trying to beat my neighbor to the last beer in the fridge. So yeah, I think he just had his hands full trying to hold Savatgy off, and I don't think there was any bandwidth left over for anything else.

Stallo: Do. Not. Blow. This. Again. Honestly, he was probably thinking: “Don’t make a simple mistake and give this away.” He knew the track was a bit one-lined and Joey Savatgy would have trouble making a pass stick. Or maybe he was thinking about cupcakes!

Martin: Right away I was just like, okay, here we go again, leading laps right off the bat. Seems like I’ve been doing that a lot this year. I snuck a peek at one point and realized it was Joey behind me so I figured he wasn’t going anywhere. I was literally sprinting everywhere for thirty-five minutes trying to get away from him. That was the pace I needed to get the job done. As we were getting down to the wire, it was like, ‘Okay, we’ve been in this position time and time again.’ Trying to not think about tipping over. It seems like when you think about not tipping over, you tip over. Fortunately I was able to ride it in and not have a silly little mistake on my part. It was the first time where I had the upper hand and was leading Joey, instead of me being behind him going down to the wire. It was almost the same exact scenario as Hangtown and Thunder Valley, only the roles were reversed, finally.

3. What was going through Alex Martin’s head while running fourth in the second moto?

Hansel: Aside from, 'Holy crap!' after seeing Martin Davalos crash and get launched into the crowd? Seriously though, he knew who was ahead of him, and he'd beaten them in the first moto, which means he probably had a pretty good idea the overall victory was in hand. He knows Cooper Webb’s points lead is huge, so he probably wasn’t thinking about cutting into his championship lead as much as possible either. I'd say his whole goal was to ride strong and catch the guys ahead of him if he could without taking unnecessary risks.

Stallo: “What do I need to do to get the overall, and where are Webb, Savatgy and my brother?” It had to feel strange that none of the three were even in contention. I’m sure he knew that catching Austin Forkner, and maybe even Martin Davalos, would be tough. So, I’ll go with, he was thinking about position for the overall over anything.

Martin: I knew who was ahead of me when I was in fourth and I was like, ‘Okay, I got the overall now.’ I knew kind of who was behind me too. I figured Cooper was kind of having a bad moto, and Joey was having a bad moto, so for me, even if I was to finish fourth, it was okay. For sure I was trying to ride as fast as I could, but those guys were, I think, maybe a little fresher than I was after that first moto against Joey. I basically went toe-to-toe with him for thirty-five minutes and had used a decent amount of energy. I wasn’t disappointed with fourth because with the guys ahead of me, I knew I still had the overall. I was pretty happy about that.