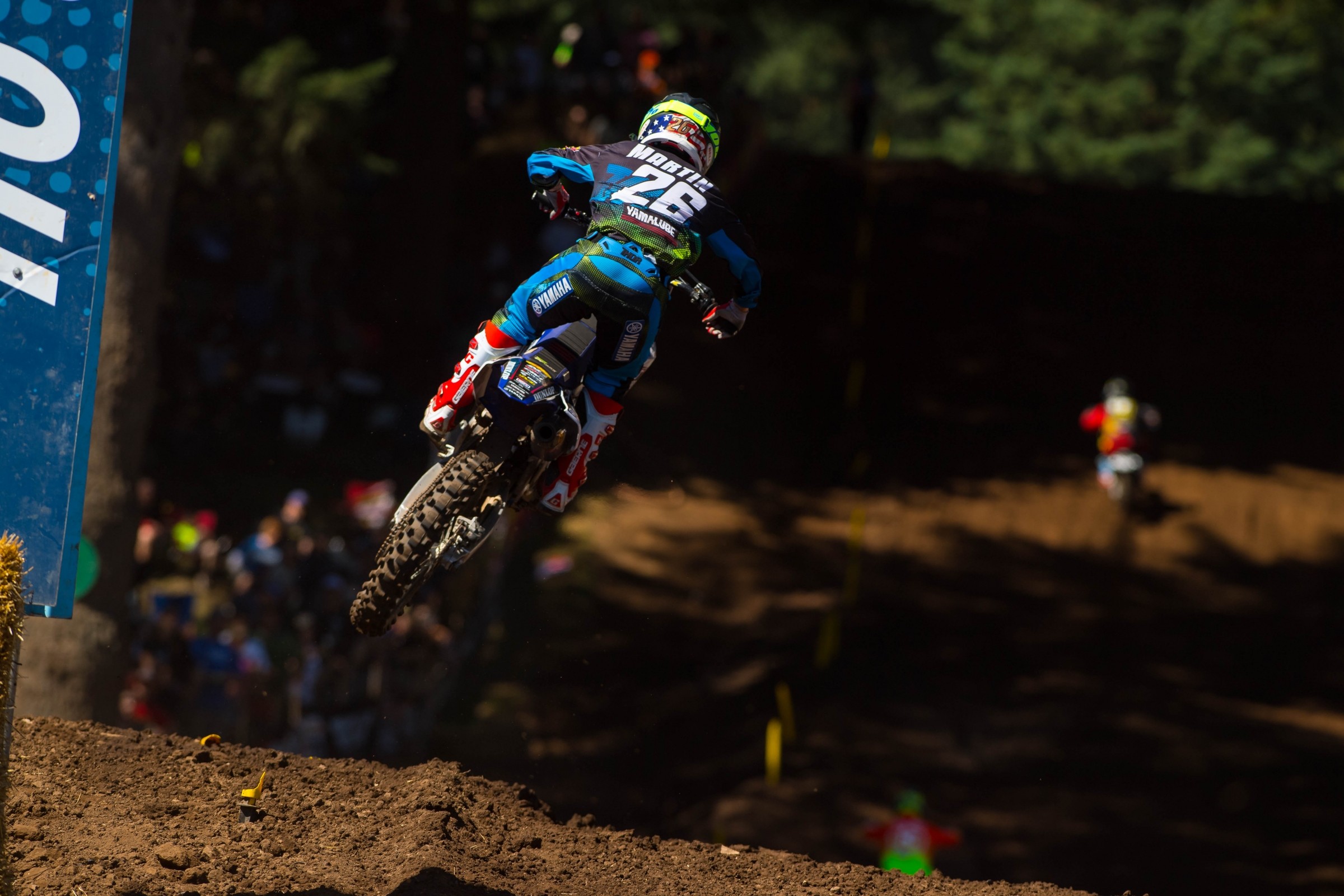 The streak is over. Yamalube/Star Racing Yamaha’s Alex Martin has led 56 laps in the 2016 Lucas Oil Pro Motocross Championship (second only to Joey Savatgy’s 71) but had yet to claim a moto win entering Round 9 at Washougal. He’s won an overall (behind a 2-2 at Glen Helen) but couldn’t get the moto win monkey off his back. On Saturday he finally put it all together, holding off a strident charge from Joey Savatgy in the first moto to take the win. He finished second in moto two to claim his second overall victory of the year. He spoke to the media in the post-race press conference.

Racer X: Nice job today!
Alex Martin: To lead every lap today in the first moto was pretty cool. I had some pretty serious pressure from Joey [Savatgy] there for a little bit and it felt good to hold onto it. I’ve been so close so many times this year, and it’s been frustrating, so to cross the finish line for the first time this year in first, I was beyond ecstatic. Even when I won the overall at Glen Helen I still went 2-2. To win that moto, that was the best feeling I’ve had so far this year. Then I had to try to back it up in the second moto. I didn’t have the best start, but there was a lot of chaos there in the first lap and I was able to weave my way through the carnage and came up around fourth and had a good battle with Jessy Nelson for the majority of the moto. I was able to get him at the end, and obviously Martin Davalos went a little crazy there and into the fence. Hopefully he’s okay. But it’s good to get the overall for sure. The crowd was nuts.

Tell us a little bit about that crowd. How were they nuts?
Motorcycles are pretty loud, so when you can hear the crowd alongside the track obviously they’re pretty loud. That first moto when I was going through the whoops with the checkered flag waving, it was unbelievable. It gave me chills how loud the crowd was and I snuck a peek over there and looked at them and they were going nuts for sure. It was pretty cool.

You’ve always been kind of a top ten guy here. What was the big change today?
I think just getting a holeshot. That really helped me out. I was sixth and tenth in qualifying, so obviously the speed wasn’t really there in the beginning of the day. I know it’s hard to pass here, so having Joey behind me from the beginning, I know he was suffering from the roost because the roost hurts here. I just tried to put solid laps in and get it done.

At some point did you start thinking you were cursed on getting over the hump for that win?
Yeah, I’d be lying if I said that wasn’t going through my head in the first moto. It’s these lame little tip overs that have been happening to me over and over again. And last weekend at Millville it happened three laps from the end of the first moto. For sure, that was going through my head and I just wanted to get it done. It was a really good feeling to cross the finish line first and break that streak and get the monkey off my back. It’s even more special here because I normally struggle with this track. In 2010 I had a really bad crash and got a concussion here so I was really timid over that single before Horsepower Hill. I was dead sailor-ing it, not scrubbing that thing at all today.

It was about as choppy as we’ve ever seen it. Looked like a lot of hard edges out there.
Yeah, for sure. I don’t know if they didn’t rip it enough, or didn’t water it enough, but I think the topsoil is gone. Coming up in the rental car, the dirt in the parking lot looks amazing. It’s loamy, it’s a different type of dirt than you see on the track. I think the years of erosion and rain loss, we struggle with that at Millville, and I just think they need to haul some dirt in and whatever else. But at the same time we have twelve races a year, and it’s good to have a variety of different challenges throughout the year. This was for sure one of the more hard-packed Washougals I’ve raced. Obviously I won so I’m happy.

Did you know Webb and Jeremy were in that pileup early?
No, I had no idea. We have five Yamaha teammates so it’s hard to tell who went down. I kind of thought Joey went down because he was right ahead of me. But yeah, just chaos and I tried to weave my way through it. I knew Austin [Forkner] was up ahead of me, so I figured those guys where somewhere far back. I didn’t realize my brother, I think he got ran over and finished pretty far back. Now looking at points it’s anyone’s game for second in the series, we’re all pretty close.

Is that that second place a big difference for you?
Yeah absolutely. The three of us are 51, 53, and 55 points back. That would be cool to get three Yamahas in the top three, I don’t think that’s ever been done before. At the same time I want to finish higher than those guys so that’s my goal.

Did you know you had control over the overall?
Yeah, I kind of did. I won the first moto and in the second, and everyone who was ahead of me in the second, was pretty far back so I know the points situation was pretty close.

The way you won moto one, with pressure the whole moto, with the mistakes you said were on your mind, was it more satisfying that you didn’t cave under the pressure? That you had to fight for it as opposed to checking out and winning by twenty seconds?
Absolutely. It seems like maybe the pressure has gotten to me at certain points throughout the year and in that one the pressure was applied the entire time. Joey almost got me a couple times, and it’s a great feeling to take the win like that. It’s good motivation going into this break to leave on a note like that.

What are you going to do during the break?
I’m going to do a little R&R. I’ve been going, really since Santa Clara, going really hard as far as training goes without much time off. So this next week will be a down week for sure. I won’t be riding quite as much. We have three weeks, so next week will be a little easier. Maybe head up to Duluth, Minnesota, and do a little fishing. Maybe play with my brother’s [personal water craft] he got from Yamaha a few weeks ago. That’ll be a great time, I’ll try not to crash too much on it. Just have some fun this next week then use the next two weeks to look forward to Unadilla and get back in the swing of things.