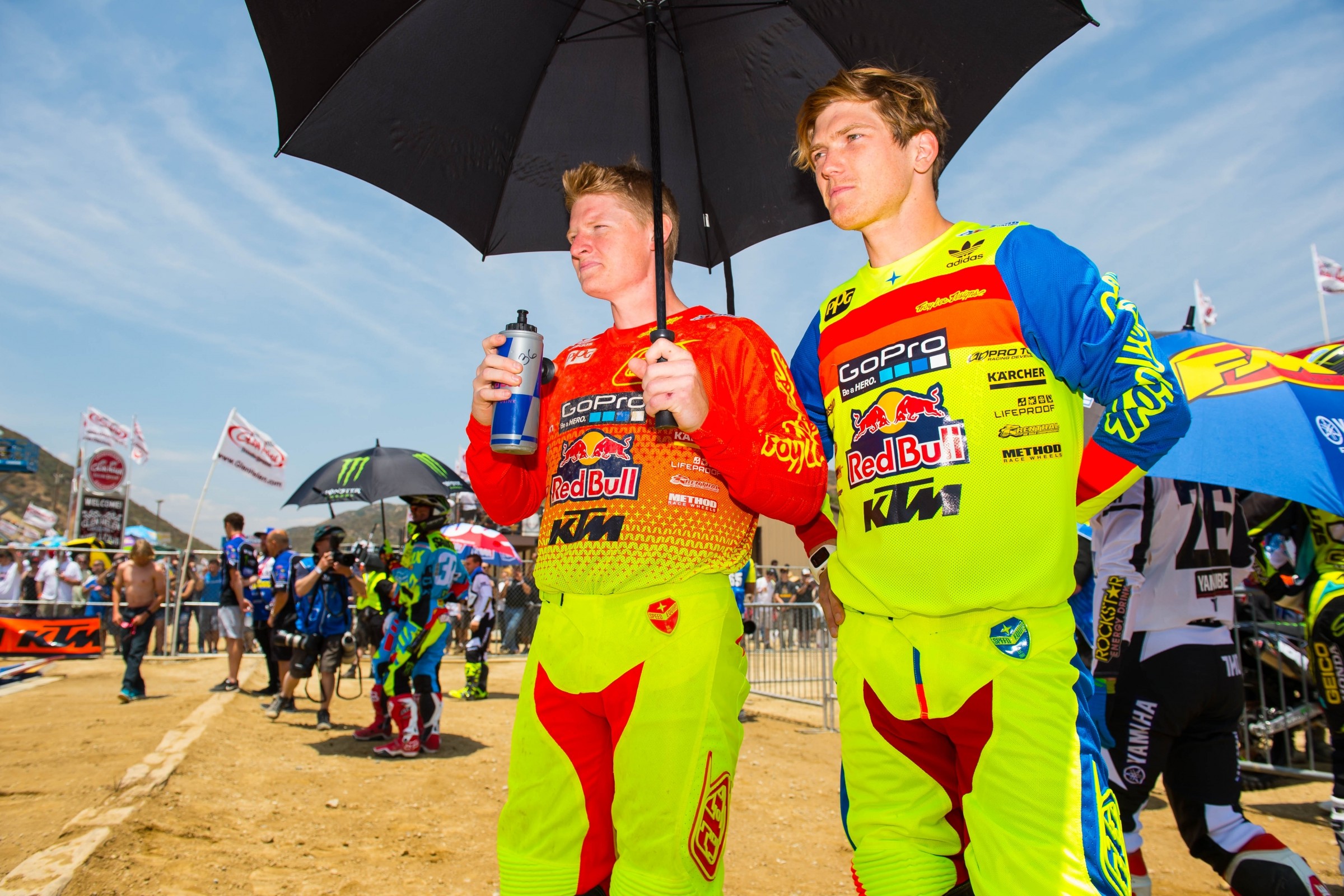 Every track has something unique, and for Washougal, aside from its stunning beauty, it’s the deceptively slick dirt. On TV it looks like the world’s greatest soil, brimming with traction, but in reality it’s some of the greasiest dirt on the circuit. If that wasn’t enough, the venue’s towering fir trees cast big shadows that can play havoc on the riders’ eyes as they rapidly transition back and from between sunlight and shade. We’ll see who handles Washougal’s unique challenges best this weekend. –Aaron Hansel

Jeremy Martin has been watching Cooper Webb put distance, both on the track and in the points, on him for a while now, but was able to stop the bleeding last week by winning at Spring Creek. The bad news for Martin is he didn’t gain any points back—he and Webb both scored 47 points. It’s better than giving up more ground, but with only four races left to cut into Webb’s 38-point lead, he’s going to have to go 1-1 at Washougal and hope Webb falters. -Hansel

Are you a Seven Deuce Deuce super fan headed to Washougal on Saturday? If so it’s going to be a busy weekend for you. Adam Enticknap’s new Album, "Heat 1," drops on Friday (7-22, in fact), and he returns to racing on Saturday in Washougal. You could literally be listening to his new music while watching him bang bars in the Pacific Northwest. As for his results, it’s his first race since breaking his femur during supercross so expect the weekend to be more about getting back to racing than nabbing results. –Hansel

Okay, so Justin Hill isn’t quite as local as Tommy Weeck, but he is from Yoncalla, Oregon, which is only about three hours from Washougal. For a motocross perspective, that's just down the street! Coincidentally, he’ll be back racing this weekend after hurting his back a while ago. As far as his results, it probably wouldn’t be wise to bet on him for the win this Saturday. It’s not that he doesn’t have the speed, he just hasn’t raced since Glen Helen and immediately running the pace would be a tall order to fill. –Hansel

Talking Marvin Musquin and Christophe Pourcel here, who both had fantastic days last week at Spring Creek. Musquin went 3-2 for second overall, his best career 450MX result, while Christophe Pourcel took fourth via 5-4 scores. Both have been improving steadily this whole season, and both ride this track very well. It’s not crazy to think they might both end up on the podium. If that happens, and if Ken Roczen wins again, we’d have a completely foreign podium! -Hansel

Ask any rider and they’ll tell you returning in the middle of the series is one of the hardest things to do. “When you’re riding by yourself you kind of have a little bit of false confidence. Then you get out here and you see these guys and it’s like, I got to be a little bit more intense during the week,” said Jimmy Decotis after his return at Southwick. Or take this from Dean Wilson in talking to Steve Matthes after his return at Millville: “Dean said that he got tired, that actual racing is nothing like practicing and that he didn’t remember Millville ever being that rough!” That’s the reality, folks. Wilson and James Stewart get another crack at it this weekend. Can they improve upon last week? –Chase Stallo

Washougal will also see the return of Jessy Nelson. While his teammate Justin Hill calls the track home, Nelson has had success here, finishing sixth overall a year ago. Like Hill, it may be asking a lot to see Nelson run top-five in his return, but a top-ten may not be out of the question. –Stallo

Behind twelve top twenty finishes in sixteen motos, Noah McConahy has certainly been the breakout privateer in 2016. “Last year I would have been stoked to get 17-20 in both of my motos, but for the first time in my career I feel like I should be in the top ten,” McConahy told us recently. “I’ve never had this confidence like I do this year.” Can the Spokane native shine at his home track this weekend? –Stallo

Sure, Fredrik Noren may not be getting the call to fill-in for the injured Cole Seely or Trey Canard at Honda HRC (well, at least not for now anyway), as Seely hopes to return by the end of the season and Canard may return for Unadilla. Either way, the Swede continues to plug along, putting in consistent top 15 performances—ten of them in sixteen motos to be exact—with his Rocky Mountain ATV/MC squad. Noren is seven points back of JGR Yamaha’s Weston Peick for sixteenth in points after Peick’s double DNF last weekend. Currently the first non-factory supported rider in points, can Noren make up more ground on Peick this weekend? –Stallo

Zach Osborne finds himself in no man’s land in points after his first moto DNF at Spring Creek last weekend. Currently thirty-three back of fourth place Alex Martin and sixteen up on rookie Austin Forkner, Osborne will need to pick up four points per moto on Martin if he wants to surpass the Yamalube/Star Racing Yamaha rider. Getting some points this weekend would be a good start. –Stallo