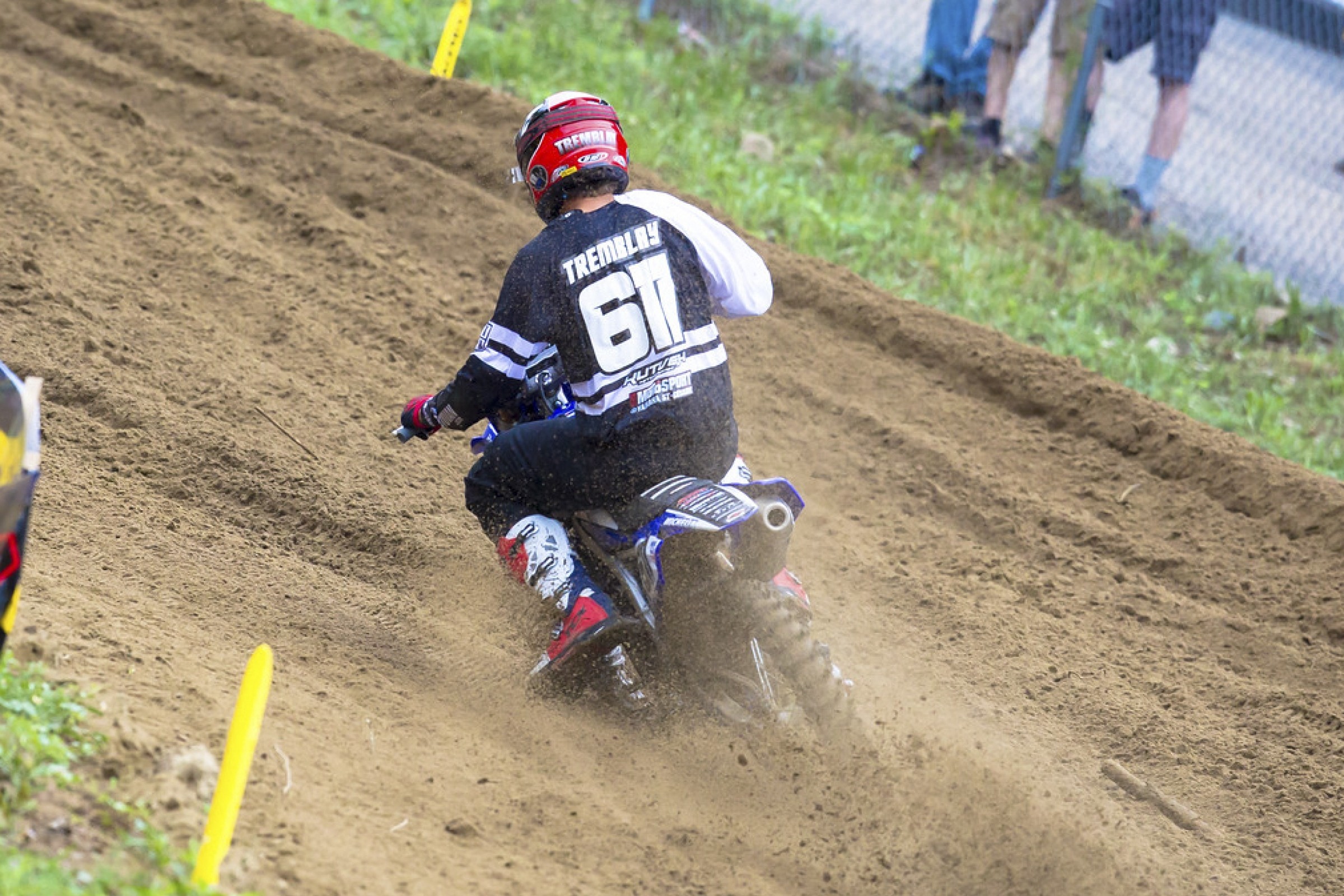 Competing in your first Lucas Oil Pro Motocross National at the age of 29 is very rare. In fact, Canada’s Tim Tremblay may have been the first rider to do just that at the Southwick National on Saturday. In his debut, Tremblay qualified fourth overall and finished thirteenth in the second moto.

This isn’t a fairytale story about a random 25-plus rider deciding to make the plunge into the pro ranks. Tremblay actually races professional snocross here in the United States for a team based out of Minnesota. He’s made quite the name for himself in the snow and races X Games as well. Tremblay has even won a few championships in his principal sport.

Before his snocross career, Tremblay was a factory KTM rider in Canada. During his Canadian motocross career he grabbed some race wins in the MX2 class and podiums in the MX1 class.

We wanted to know why Tremblay decided to race in American Motocross after all of these years, so we called him up to get the inside scoop.

Racer X: Hi Tim, you’re a full-time professional snocross racer, but you also have a background in motocross. Growing up did you focus on motocross or snowmobiles more?
Tim Tremblay: I started racing motocross around twelve years old. I wanted to be a motocross champion when I was young. I was actually a factory rider when I was 17 and 18 years old for factory KTM. I got a deal racing snowmobiles when I was still riding for KTM. I’m from a place that has a lot of snowmobiles, but I had never ridden one. I went and did that one winter and everything went pretty easy for me. I made the switch to the snowmobile just because the money was better. In motocross it was so hard to make money and everything seems to be so hard. The last ten years I’ve been racing snowmobiles in the United States and riding dirt bikes as training.

Well, you could have fooled us into thinking you race motocross full-time after Southwick.
Yeah, that was good because it was one of my dreams to race Lucas Oil Pro Motocross. I’ve never done one before and I always wanted to. I didn’t know where I was going to fit in. I decided to try one before I got too old and I was really surprised. I thought I was going to be slower than that, but I actually got results and it was a pretty fun weekend.

You qualified fourth overall and you finished 13th in the second moto. At your age and it being your first national in the United States, that’s a rare feat.
In the first moto I was running fifteenth, but I blew up my motor with two laps to go. I think I would have gotten thirteenth overall, but that was still pretty sick.

Had a good weekend in fargo. I won on friday and got fifth after a bad start on sathurday. Moved up to third place in the championship #kyb #skidooofficial #amsoilinc #snocross #oakley #gofastcanada #usairforce #fordtrucks #woodys #klimgesr #cti

Are you impressed with yourself?
Yeah, [laughs] I kind of got lucky a little bit because sand tracks get rough really fast. I was in the first group of practice and the track was smooth, so I was able to get a fast lap right away. I think I got lucky there, but I put the hammer down in the qualifying to make sure I got a good lap in. It was pretty crazy going up to staging and being so close to the front. That was amazing and a dream come true. I got to do an interview with Georgia Lindsay before the race. I had so much confidence during the weekend I couldn’t believe it. It was crazy.

Regardless of your practice session you showed that you could run the pace the entire day.
Thanks. Given that my bikes aren’t even comparable to the factory guys it’s crazy! The second moto I pulled out my bone stock practice motor and I got 13th with that. I was still pretty happy with the results and everything. Considering how much preparation that I had for this year, I couldn’t believe it.

Are you a sand specialist?
Yeah, that’s my favorite type of track. I like the rough sand, but I can ride hard pack as well as ruts too. Where I grew up there were a lot of sand tracks, so I like them a lot.

I know you’ve raced in Canada as a professional and you make a living off of snocross, but you made it look easy this weekend. Out of nowhere, here is Tim ripping it up with the factory guys…
I think I passed one or two factory guys. It was pretty fun doing that during the race. I think it was Tyler Bowers or something. It was still pretty cool passing a guy on a big team. The whole weekend was fun.

The machine is about 500 pounds, so that is big. The tracks are so small that the bumps are getting so big that we are trying to move around on this track while basically riding a big refrigerator beneath us.

Did any potential sponsors introduce themselves to you?
A couple people did. They congratulated me after the race, but nothing really serious like that to try more races. I know my sponsors in Quebec were stoked on it. I didn’t really get anything. Snocross is really big for me. Last year I got second in the world for snocross. Some people will see that I’m putting more effort into snocross and get scared to give me a ride or something like that. I would be very happy to do motocross during the summer time with a good team. That was my dream since I was young, but I can’t make a living out of it like I can with snocross.

Do you plan on racing any other nationals this summer?
I would like to do one more, maybe Unadilla, but I’m not sure if my schedule is going to allow me to go there. I would like to do more, but they are pretty far.

How long ago did you plan to race Southwick?
I decided right after the snocross season ended this year. I tried to get my license to race, but it was pretty hard for me because I had never raced in the United States before. I had some good results in Canada. I’ve won nationals in Canada before and had podiums in the MX1 class there. The guys here refused me at first and I was like are you kidding me? I finally was able to get it and race. I didn’t know what to expect.

What does your schedule exactly look like with snocross coming up?
We start riding in November and then the season ends at the end of March. That takes up my winter, so the rest of the summer I just train. I train on a bicycle and by riding motocross to keep in shape. I race local races and a couple of East Coast Canadian nationals. I hit up the gym more towards the end of the summer to ready my body for snocross.

I’d imagine it’s pretty hard to practice for snocross when you don’t have any snow.
The snocross season starts so early! The first race is around Thanksgiving and every year it’s a mess. All of the teams are making fake snow so that we can practice. The weather is always so warm that we have a hard time getting it together for the first race. It’s always a rush to get ready. After Christmas it’s a little easier because it gets cold and we can make snow. The first race is a little too early for the winter we have now.

What’s the snocross series like? Is it a pretty big deal and is it growing?
It’s big! We have races in Minnesota, Michigan, Wisconsin and all of the states close to the Canadian border. We’ll go to New York and we are doing X Games in Colorado. It’s pretty big. We have a lot of factory teams that do the series and it’s growing every year with new riders. It’s the national series in the United States and it’s a big deal for those who race snocross.

I’ve won four championships and the worst that I have done is a third place in the championship, other than the year that I got hurt. I had a lot of success, which is great. It’s pretty great to make a living out of riding. I really enjoy my life and racing.

How difficult is it to switch between riding a snowmobile and a dirt bike? Do they have any similar feel to them?
It’s a little bit different. I think it’s a lot easier to ride a snowmobile because you have two skis and a big track, so you don’t really have to balance. You don’t have a rear brake, clutch, or any gears. The toughest thing is the weight of the snowmobile. The machine is about 500 pounds, so that is big. The tracks are so small that the bumps are getting so big that we are trying to move around on this track while basically riding a big refrigerator beneath us. You need a little more strength on a snowmobile rather than on a dirt bike. Both are pretty fun, a bit different, but you need skill and endurance on both. Snowmobiles are more about sprinting and the races are a little shorter. Motocross is a more mental game where you have to be smarter with line choice. It’s a little more technical.

Do you follow supercross and motocross from the states pretty closely?
Yeah, every winter after every race on Saturdays I’ll go to a restaurant to watch AMA Supercross. I’ll watch those guys all of the time. If I can’t watch it I’ll watch it online. I watch all of the motocross races too. Just yesterday I watched Southwick again to watch the lines that the other guys were taking. Motocross is a dream of mine and I love watching them.

You make your entire living off of racing then?
That’s what I do! I never stop. I’m a full-time athlete and it’s great.

You seem like a really busy guy. What do you do in your spare time?
I ride my bicycle and train in the gym. I take care of my two kids as well. I’m racing every weekend and I haven’t had a weekend off since April. I enjoy racing, training, and testing. It’s what I live for.