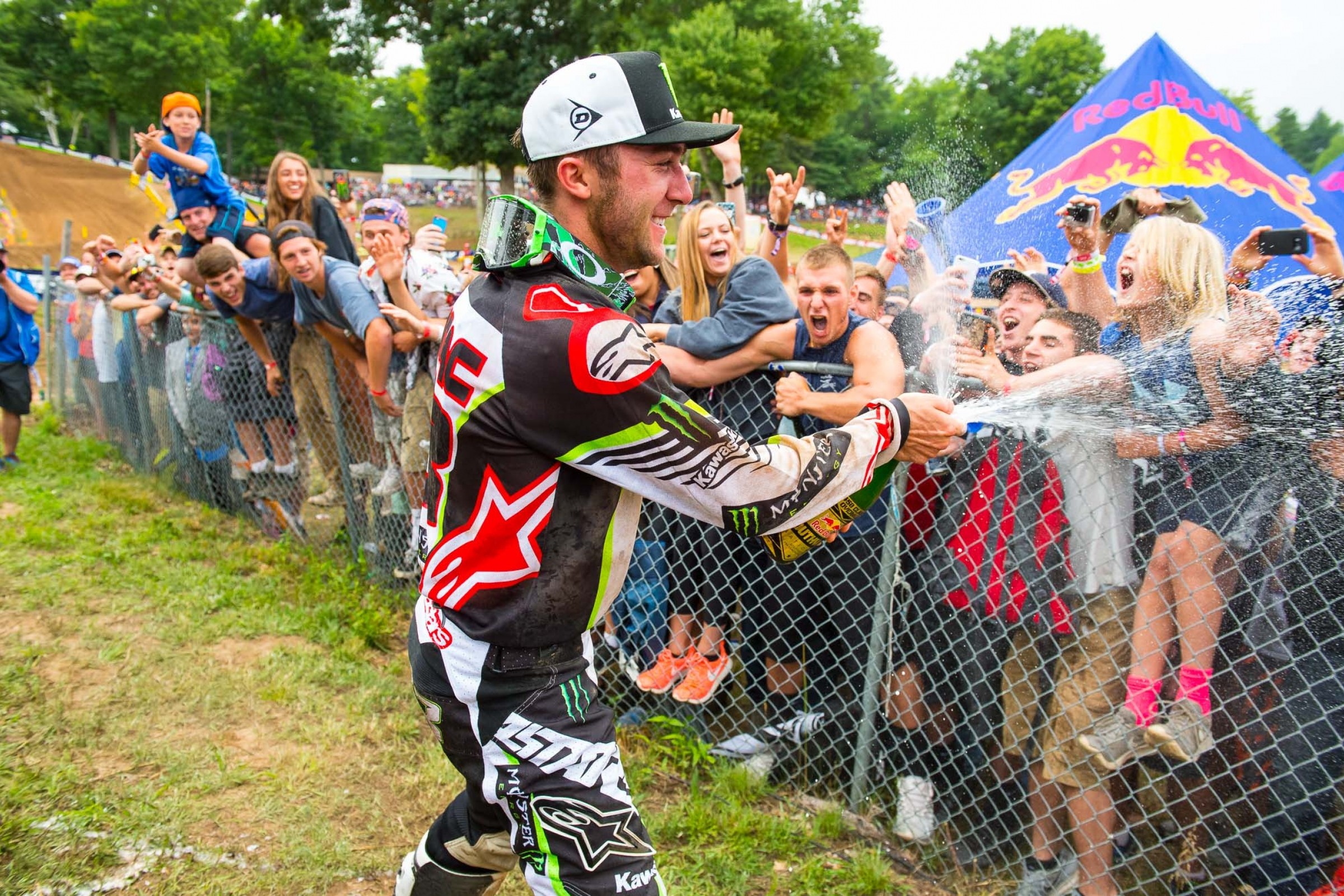 The streak is over. For the first time this season, Ken Roczen has lost a moto…not due to a mechanical. After looking nearly unbeatable through six rounds, where he’s won eleven of twelve motos and five of six overalls, the Soaring Eagle/Jimmy John’s/RCH Suzuki rider ran into an immovable object in Eli Tomac, who bested Kenny in two hard-fought motos. The second one, especially, was a duel to the end, but Tomac and his Monster Energy Kawasaki team finally came out on top. Roczen had 2-2 finishes for second overall in Lucas Oil Pro Motocross’ return to Southwick—the first time the series has visited the track since 2013.

Tomac has always been bad fast at Southwick and actually edged Roczen for the 250MX overall back in '13. After giving Roczen a big run two weeks ago at Muddy Creek, but losing by a sizable margin last week at RedBud, things finally came together in the sand.

“It turned into a nasty, nasty track, but at the same time pretty fun,” said Tomac in the post-race press conference. “I came into the day with a positive mindset. I was just going to go have fun riding my dirt bike, you know? I don’t know what else to really say. Any time you can go out and get a win it’s good.”

“I struggled today pretty bad,” said Roczen in the post-race press conference. “I left my setting and it wasn’t ideal. It works on the tracks we’ve been at but it actually got more sandy here and the base is so hard…obviously I’m on air forks so that’s a little bit of a different story. No excuses there. I struggled really bad in the first moto and we went back and made some changes and it was better for the second one.”

The first moto started like most for Roczen this year—a good start and then a quick jump to the lead. Roczen took the lead from Justin Bogle on the fifth lap, but had company with Tomac close behind. Tomac was the aggressor today, and quickly pounced on Kenny, taking the lead the following lap. That was all she wrote, as Tomac cruised to dominating 24.3-second win.

There was never any doubt that the overall would go to either Tomac or Roczen, as they squared off in a second moto for the ages, leaving third place more than a minute behind at the checkers. It started much like the first moto, with Roczen jumping out to the early lead after another Bogle holeshot. On lap 6, Tomac took a brilliant far outside line to push into the lead. Two laps later he washed the front end, allowing Roczen back in front. Tomac was able to quickly regroup and took back the lead. Unlike the first moto, though, this time Kenny hung tough and then late in the race put in one more big charge to get within striking distance. Tomac's lead didn’t stretch to more than two seconds for much of the moto, as Roczen continued to push, but Tomac closed the door at every opportunity and went 1-1 for his first overall since Glen Helen in 2015.

AutoTrader.com/Monster Energy/JGR Yamaha’s Justin Barcia has been steadily improving since the series has come east. Today was arguably the best we’ve seen Barcia ride all year. Barcia grew up in New York and visited Southwick a few times as an amateur racing qualifiers for Loretta's. After setting the quickest time in qualifying, Barcia went down on the start in the first moto and rounded the first lap outside the top twenty, but was able to fight back to sixth. The start was much better in the second moto and Barcia made an early pass on Marvin Musquin to take third. Barcia said he spent most of his energy in the first moto and didn’t have much to challenge the leaders in moto two. Still, it was a move in the right direction for Barcia and the team.

“It was challenging,” said Barcia of the first moto. “Fighting through that pack was tough. The track isn’t like it used to be where there’s two lines everywhere, it’s a little bit more one-lined, so it was pretty hard to pass. Unfortunately, I had to use a lot of energy and the second moto left me a little dry.”

Cooper Webb had won two straight coming into Southwick but at least this weekend was a bit of an unknown since he'd only raced a national here once, as a rookie in 2013. Well, now we know Webb can ride the sand just as well as any other track--he pulled his usual second-half-of-the-race shenanigans in both motos. In moto one he started around ninth (after lap 1) and hung there for a bit. Then he turned up the wick at The Wick and got to second, and with about five laps remaining trailed race leader Jeremy Martin by 8.1 seconds.

“I knew where I was and I knew it was going to be tough,” said Webb in the post-race press conference. “I felt like I could catch him, but to catch somebody is one thing, to pass them is another.”

Webb did catch Martin, closing the lead to 2.7 seconds with two laps to go. He cut the lead even further, down to 1.3 on the final lap, but ran out of time. The second moto was a much different story. Webb got the holeshot, and after a brief challenge from rookie Austin Forkner, took off for the win. His lead at checkers in the second moto was 20.3 seconds. He added in his TV interview that he wishes there were more sand tracks on the schedule.

“Oh, it was nice,” said Webb about getting the holeshot after spending so much energy in the first moto. “It’s huge. I haven’t really been ever to do that so far.”

It had been seven motos since the two-time 250 Lucas Oil Pro Motocross Champion Jeremy Martin had won a moto. Admittedly, Martin hasn’t been 100 percent this year. Lately it’s been better, as Martin showed signs in the second moto at RedBud before crashing. This week was nearly vintage Martin. After Aaron Plessinger passed him for second early in the first moto, Jeremy caught fire and pass Plessinger back and eventually the early leader Shane McElrath. Martin would hold on to win his first moto since Round 3 at Thunder Valley.

In the second 250 moto Martin was fourth, so now it was his turn to catch Webb. Before he got a chance, he was pressuring McElrath and Forkner in second and third before losing the front-end in a deep corner after getting roosted by McElrath. He remounted in 12th and charged back to inside the top ten and was helped by late crashes from Joey Savatgy, Arnaud Tonus and McElrath to come all the way back to fourth for second overall.

How about the rookie Austin Fokner? The 17-year-old Monster Energy/Pro Circuit Kawasaki rider was all over Webb early in moto two and almost made a pass, admitting he was "sending it" for awhile before he got winded and Webb got away.

“I got pretty decent starts all day,” said Forkner in the post-race press conference. “I think both were inside the top ten. I got up and made passes quick. I got stuck behind McElrath [in the first moto] for a while and Tonus got by me and then I lost my groove a little bit. In the second moto I got a better start and knew I need to make things happen quick.”

Good day/bad day for the rest of the Monster Energy/Pro Circuit Kawasaki outfit. Joey Savatgy came into the day down just 11 points to Webb but had a lackluster day, getting 10-11 scores for ninth overall. He started just outside of the top ten in moto one and didn't move through very quickly, he had a better ride going in moto two and had moved into the top five before a crash.

On the other end, it was a breakthrough for Arnaud Tonus, who was third in moto one and was in position for his first career overall podium until a late crash. Tonus admitted he got tight in the first moto because it was the first time he'd been up front in awhile, but he said he felt great in moto two and was bummed that he threw it away. While Tonus certainly has sand experience from his GP days, he said the Southwick track is a totally different style of sand track than what he's used to--and he also thinks he can ride this well at the races to come.