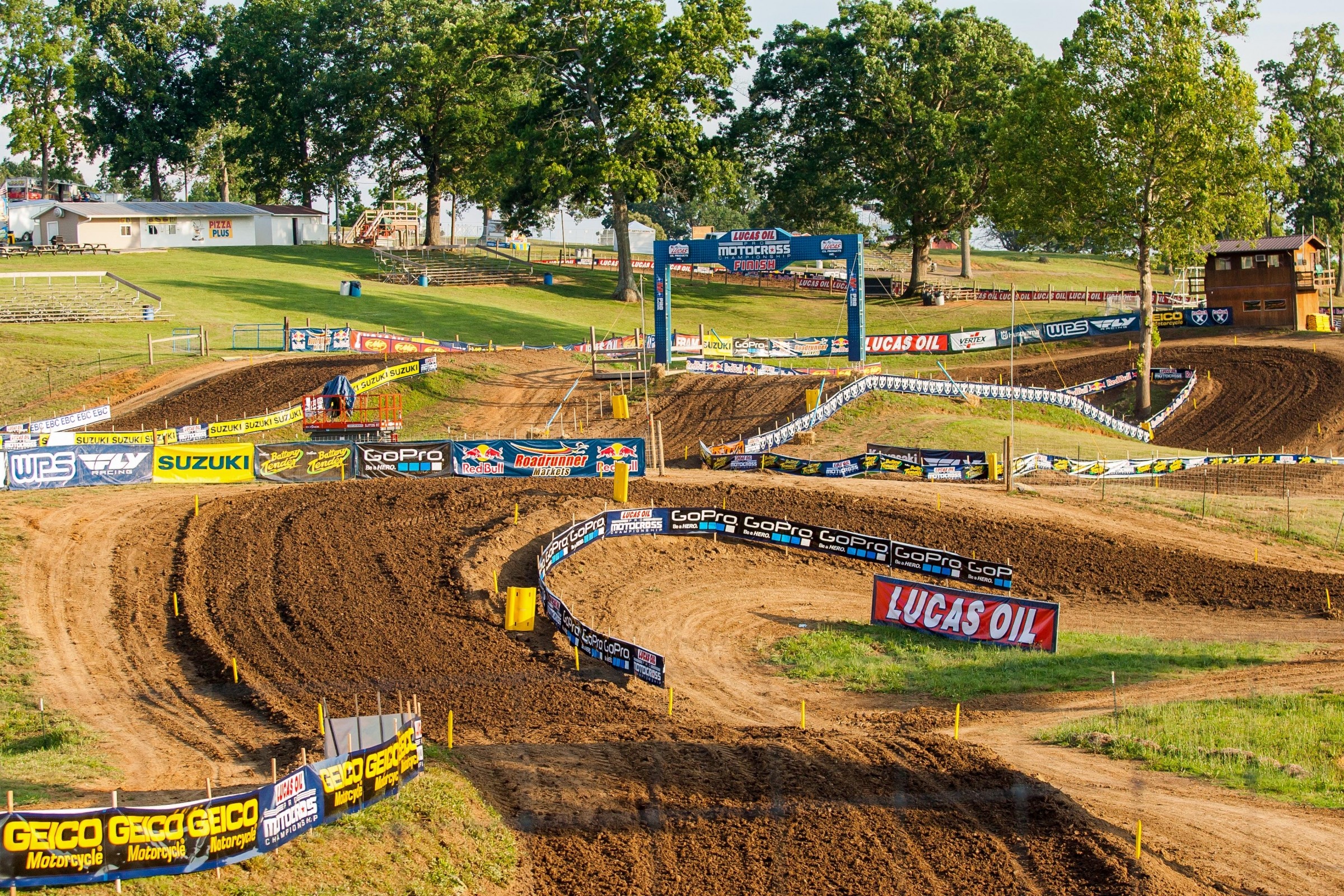 450 Words The ABC’s of Muddy Creek

By Andrew Fredrickson and Billy Ursic

Want to get a real feel for the weekend’s Red Bull Tennessee National? It’s as easy as ABC!

A is for AP: As in Aaron Plessinger. The Yamalube/Star Racing pilot was coming off a strong showing at High Point, but went down in the first turn of both motos. He ended up 14-13 for 13th overall.

B is for Blake Baggett: The Yoshimura Suzuki rider made his return to action this weekend. An eighth overall isn’t bad for breaking a collarbone a few weeks ago at Hangtown.

C is for Cooper: Webb snagged his first overall win of the season with a 2-1, narrowing Joey Savatgy’s points lead to twelve. Cooper had said this race, at a track he grew up on, would be “the one.” Indeed.

D is for Vitamin D: The sun was out all day, making for the hottest national of the year thus far on the Lucas Oil Pro Motocross Championship tour.

E is EnduroCross: The Friday night track activities included an EnduroCross pit bike track, as well as some downhill Barbie car racing and even a dog show!

F is for Freaky Fast: This may be the slogan for Jimmy John’s gourmet sandwiches—one of RCH/Soaring Eagle Suzuki’s main sponsors—but those two words pretty much sums up Ken Roczen’s day—and season—thus far.

G is for Gared: After scoring his first point last weekend at High Point, the likeable two-stroke martyr Gared Steinke failed to make the motos at Muddy Creek.

H is for Home Race: Riders from this region—who were born and raised racing on the Muddy Creek circuit—all had impressive finishes, and acknowledged using the strong support from the fans for motivation.

I is for Intense: This sums up Rockstar Energy Husqvarna Factory Racing’s Zach Osborne’s charge in the second moto. Zacho was third in moto one, but after an early crash put him outside the top twenty in moto two, Osborne raced his way back to tenth.

J is for JB: Ninth, tenth and eleventh overall in the 450 class went to riders with the initials JB: Justin Brayton, Justin Bogle and Justin Barcia.

L is for Lackluster: Adam Cianciarulo’s results outdoors haven’t been stellar this year, and 11-22 finishes for sixteenth overall at Muddy Creek don’t look very good. But AC has shown signs of speed and has his starts back. If he can stay off the ground, his results will finally match up to everything else.

M is for Muddy Creek: Eastern Tennessee’s crown jewel of motocross tracks was prepped to perfection. Rocks and dust was nowhere to be found on this particular day, and the soft and yes, muddy, soil from practice turned just about right by the second motos.

O is for Obstacles: The track delivered a wide variety of challenging obstacles, including the Bomber Triple, which proved difficult for a majority of the 250 class riders. Then you had Ken Roczen practically jumping underneath riders on a quad in the first 450 moto. Jumping here wasn’t for show—it was for dough.

P is for Pizza Plus: One of Muddy Creek’s longtime sponsors were on hand dishing out thousands of slices of delicious pizza for the faithful spectators. And it was good. We can attest.

Q is for Qualify: While it does give you a better gate pick, the morning timed-qualifying sessions didn’t really translate into better results. (I.E. Fastest qualifiers Pourcel and Cianciarulo.)

R is for Red Bull: The popular energy drink was the title sponsor for this event, and they made sure their presence was felt. There was no shortage of Red Bull hospitality throughout the facility all weekend long.

S is for Star Racing and Soaring Eagle: These team sponsors both had plenty of exposure on the box this weekend, not only winning both classes with Roczen and Webb, but adding extra podium time with Broc Tickle (overall) and Alex Martin (moto two).

T is for Trophy: Did you see this weekend’s trophy? Very cool. Props to MX Sports’ Nick Koester for the idea.

U is for Ubly: As in Ubly, Michigan, the hometown of 250 class privateer Marshall Weltin, who went 21-17 for 21st overall. The privateer’s sponsors include IBCorp, SRS Pharmacy Systems, and Caro Motorsports.

V is Victory Sports: The renowned promoters of Muddy Creek Raceway did a fantastic job hosting their fourth-ever round of the Lucas Oil Pro Motocross Championship. For more information on the events Sam Gammon and crew promote, check out www.victory-sports.com.

W is for Weston: 5-9 moto scores for seventh overall was Peick’s best finish thus far in 2016.

Y is for Youngster: The youngster in the 250 class is rookie Austin Forkner, who continues to post solid finishes on his Monster Energy/Pro Circuit Kawasaki KX250F.

Z is for Zero: As in zero bike problems for the Yamalube/Star Racing Yamaha team this week. The team made some changes after suffering two DNFs last week at High Point.