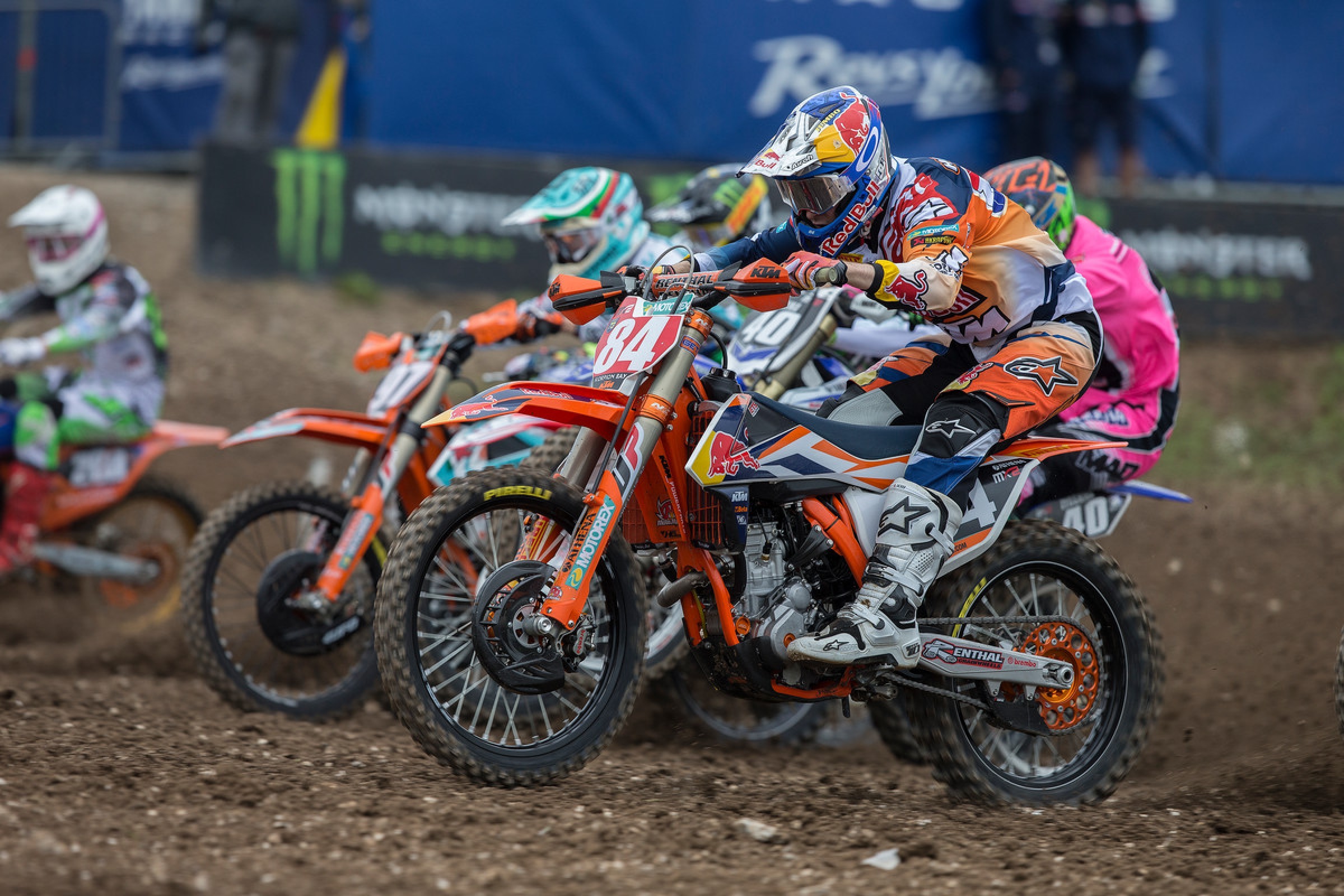 On current evidence there seems to be little stopping Honda Gariboldi’s Tim Gajser from becoming the first back-to-back winner of the MX2 and MXGP categories—the principal classes of the FIM Motocross World Championship—in the modern era. The 19-year-old HRC star effectively coasted to his sixth Grand Prix win (from eleven rounds) of the season in Great Britain and maintained his 100 percent podium record since declaring his arrival in 450s with an opening salvo in Qatar. He now has a 74-point lead after capitalising on world champion incumbent Romain Febvre’s crash in qualifying, which held him out of the race on Sunday.

The Slovenian, who is apparently becoming something of a celebrity in his native land (independent from the old Yugoslavia since 1991), will not publicly comment on his chances of snaring a remarkable title success and the mishap with Febvre in his racing collision with Ben Townley on Saturday at Matterley Basin and subsequent injury scare only reminded him (and everyone) that everything can switch on the flick of a dime.

For the many rumours surrounding his next move (a jump straight into AMA Supercross or another year in MXGP or a move direct to the HRC squad) Gajser would only state that his immediate future involves an attempt at the 2016 Monster Energy Cup in Las Vegas in October.

Through cloudy, warm conditions and then a very English soggy end to this impressive and busy Grand Prix, Gajser was masterful around the wide course, long jumps and fast trajectory. He took Pole on Saturday and made moto pace-setters Evgeny Bobryshev and Max Nagl look incapable as he sliced away their leads and gave the Russian and German almost zero chance for resistance or comeback. Old heads in the paddock like Sylvain Geboers have remarked on how much Gajser moves the CRF450RW like a 250 and how he does show a high level of manipulation (turn downs, scrubs) on the bike, probably only matched by Febvre and in the UK on this occasion the increasingly flowering Kemea Yamaha rider Valentin Guillod, another rookie out of MX2 for 2016.

For his part Gajser has evolved; and the edgy and slightly snappy style and approach of earlier rounds that led to mistakes and the odd crash seems to have evaporated. The Honda man credits the work done with father/trainer Bogo highly in this aspect. It seems there is a powerful paternal bond here that is working effectively to rule the very peak of this sport in Grand Prix. As a footnote to the 2016 tale that now sees Gajser firmly at the head of the cast Febvre returned to the paddock Sunday morning, in some pain, and stated his desire to attempt the races. The 24-year-old was denied the all-clear, and in what is sure to be the heaviest blow to his desire to defend his crown has also been ruled out of round twelve this week; the FIM rightfully taking concussion cases very seriously. Ironically the same situation cast Gasjer out of the 2015 edition of the British GP at Matterley after he had fallen in morning MX2 warm-up.

Rockstar Energy IceOne Husqvarna’s Max Nagl grabbed second overall and HRC’s Gautier Paulin (who is rumoured to be either replacing or joining the German on the works FC450 for 2017) was third.

Tony Cairoli was another rider suffering a scare. The Red Bull KTM representative was wily to capture second position in the first moto at a circuit where he has enjoyed past title and race success but a tough landing on the vast quad jump in the second moto saw the Sicilian take a hard impact through his left wrist. Thankfully a post race scan cleared him from any breakages but it remains to be seen what shape he will be in for Mantova this weekend and the swelling around the joint was sizeable less than an hour after the moto.

There was much fanfare about Chad Reed’s return to the scene where he first popped onto the international motocross map back in 2001 (achieving Grand Prix victory in the Dutch sand of Lierop and finishing as runner-up in the 250cc World Championship). Although there was a degree of expectation around him and a surge of goodwill from fans eager for a glimpse, photo or signature from the veteran there was also a feeling of exhibition about his appearance. It was the first of a double salvo in Grand Prix and a reconnaissance of the scene before also being slated to enter the two American rounds in September. Reed, riding a stock YZ450F but loaded with his factory suspension and a few tweaks to the engine as well as swapping-out the pipe, suffered a rear brake problem in the qualification heat on Saturday and coasted to fifteenth for a pick in the middle of the gate.

Reed also commented in a public Q+A session on Saturday that he liked the European style of riding tracks and went into interesting detail about how the ground changes and how a different technique is necessary to match the speed of the Grand Prix elite.

He had ample chance to size-up some of his opposition with a busy first moto (was fighting for the top ten at one point but ended up fourteenth) and then had the misfortune to run into a downed Jeremy Van Horebeek on the opening lap of the second race when he had to come back from last to seventeenth. The 14-17 was good enough for thirteenth overall.

“Obviously I have been racing supercross so my physical and cardio fitness is totally fine but I just don't have the muscle memory and thirty minutes of pounding-pounding-pounding,” Reed said to Monster Energy. “This track, compared to what I am used to, has a lot of acceleration bumps and a lot of G-outs at the bottom of the hills and truthfully my legs and back just found it tough. I have to be honest and say I didn't have that grind. I woke up this morning and thought ‘argh; it’s gonna be a long day’ just because I’m used to that one day schedule. What we did in one day I had to back up twice more today.

“The pace for me doesn't seem too gnarly and in terms of my feeling on the bike it was the best I’ve had for the outdoors in a long time,” he added. “I enjoyed it…even if it was tough and I was praying for the rain in the second one to slow the pace a little and you have to respect the faster parts a bit more. Crashing on the first lap and coming from last to seventeenth wasn’t ideal…but I had a good time if I’m honest.”

In MX2 Red Bull KTM’s Jeffrey Herlings is almost starting to tease his opposition. The Dutchman gave false hope on Saturday when he struggled in the Qualification Heat and Rockstar Energy Husqvarna’s Max Anstie gave the British fans cause to rub their hands with a promising run to Pole (he didn't get the starts on Sunday to be able to show the same potency). Herlings was dealing with a hairline fracture of the right heel after an incident in a Dutch Championship outing at Markelo the previous weekend. The big jumps, hard landings and downhill bumps were a shock to the system and he was uncompetitive in the qualification heat, only taking fifth place (in MXGP Wilvo Virus Performance KTM’s Shaun Simpson was forced out of the GP after one moto after his still-broken right hand was also painful due to the demands of Matterley). Come game time and ‘84’ ripped two holeshots and vanished once more for his eleventh GP win in a row and tenth shutout, complete with twenty-one moto successes. He also boasts a 148-point lead over Suzuki’s Jeremy Seewer who was fourth after falling on the last lap of the second moto trying to pass KTM’s Pauls Jonass. The Swiss and Latvian engaged in close duels in both outings and Jonass rode well to keep his pace, especially in the wake of two big crashes on Saturday.

Herlings’ authority is such that he is one of the few who could hold a candle to Gajser’s radiance at this stage and the thought of both of these riders in MXGP for 2017 is prospectively exciting—alarmingly for his current rivals Jeffrey is making no firm noises about considering a move for next season. News on his plans is expected when that third (belated) world title is finally confirmed and there is some suspicion that it could instigate an announcement for a fourth. The 21-year-old still has two years of age credit in MX2.

Monster Energy Kawasaki’s Dylan Ferrandis courted no controversy with his starts this time although the Frenchman would have wanted a bit more speed in order to challenge Herlings. With a 2-2 he was clearly the best of the rest and even a first moto engine problem that limited his power and allowed the warring Seewer and Jonass to catch him was not enough to deter him from his fourth podium of 2016 and third in the last four GPs.

Kemea Yamaha’s Benoit Paturel had been in good form with two rostrum appearances in the last two events but a fall on the step-up out of the valley meant he was a non-starter for the second race.

American interest was again reserved to the 250s. Thomas Covington took his factory FC250 to tenth in what was just the second outing for the youngster since coming back from injury; a first moto position of sixth marked a second-best classification of an injury-hit season while goggle fogging kept him away from the leaders in the second. Meanwhile Bud Racing Kawasaki’s Darian Sanayei continues to build his reputation as one of the most promising recruits for MX2 in 2017 as he caught and passed Spanish sensation Jorge Prado to win the first moto in the EMX250 European Championship. He lost the overall to Britain’s Steven Clarke but still walked the podium once more to remain the feeder series’ most consistent young athlete.

MXGP will glide over the English Channel and back to mainland Europe this week. The Grand Prix of Lombardia takes the series into the fine sand of Mantova and will then lead into a small summer break for the championship.