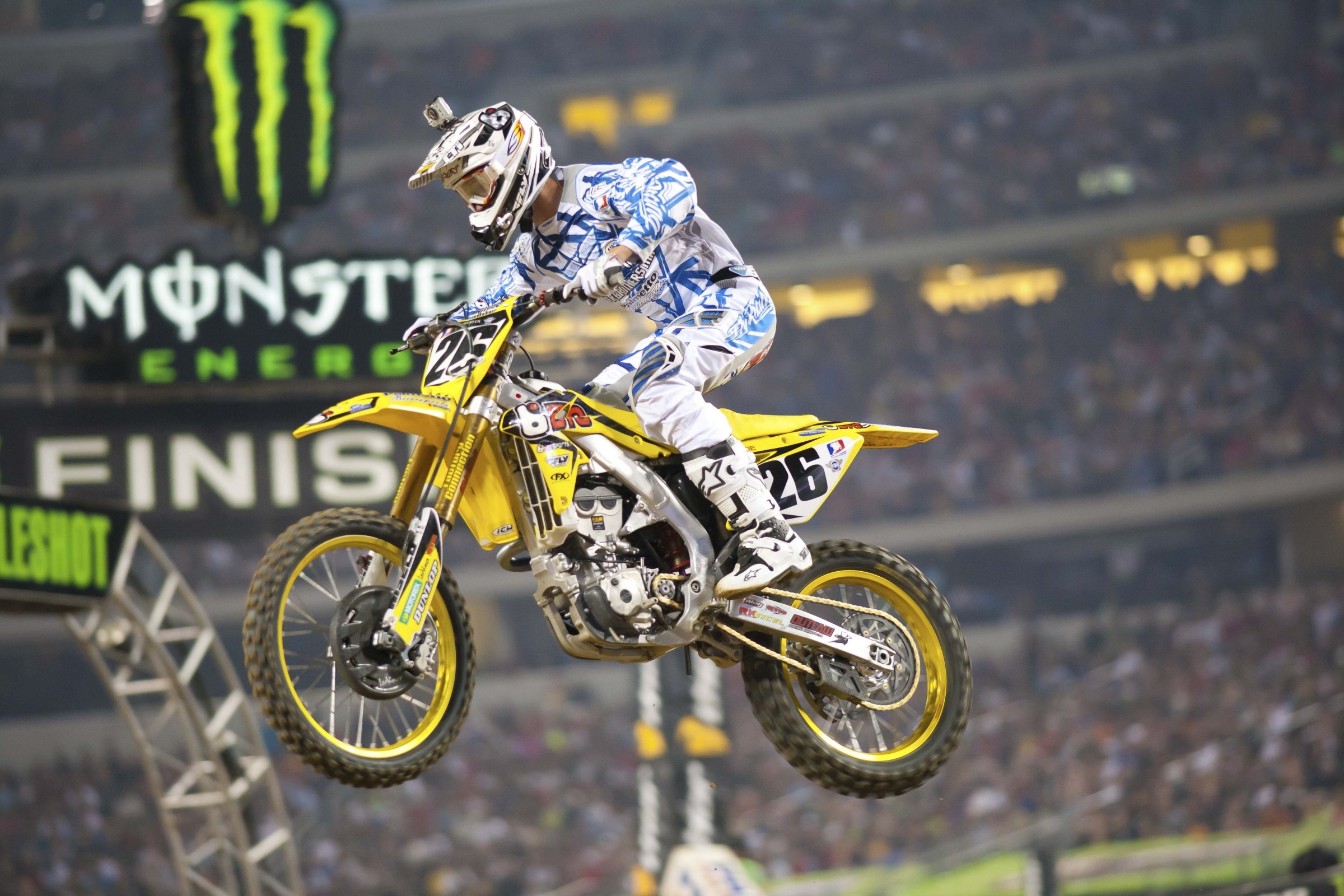 The List Best Never to Win a SX Race

With the 2016 AMA Supercross Championship complete, it marked another year where new names were added to the record books as race-winners: Monster Energy/Pro Circuit Kawasaki's Joey Savatgy, GEICO Honda's Christian Craig and Yamalube/Star Racing Yamaha's Aaron Plessinger all notched their first-ever wins in 250 SX, and Rockstar Husqvarna's Jason Anderson added to his entry in the record books with the first two 450 SX main event wins of his career.

Unfortunately, another year passed and some truly exceptional veteran riders--BTOSports.com KTM WPS' Justin Brayton, MotoConcepts/SmarTops' Mike Alessi, Rockstar Husqvarna's Zach Osborne—still haven’t gotten their first-ever AMA Supercross win, in either class. And that got us to thinking, who are the best riders to have never won a supercross?  Obviously in the seventies and early eighties, before there was a 125SX class, there are lots, including AMA Motocross Champions Gary Jones, Danny LaPorte and Rick Burgett, just to name a few.

1. STEVE LAMSON: Arguably one of the fastest 125cc riders in the sport's history, as well as a two-time AMA 125cc National Champion, and a member of the original Pro Circuit Honda team (alongside Jeremy McGrath, Brian Swink and Jeromy Buehl) it still seems amazing that Steve Lamson never won an AMA SX in either class. He can boast wins later on though in a different role, as team manager of the Star Racing squad that oversaw wins by Cooper Webb and Jeremy Martin.

2. GUY COOPER: A 125cc National Champion, Cooper never raced the "kid's class" when he turned pro in 1984, one year before the new class began, but he spent the vast majority of his career as a 125cc specialist outdoors. Cooper is easily one of the most beloved figures in SX history, and his jumping skills were next-level before people even knew what the next level was! But he never quite pulled it together for the twenty laps it took to win a main event, although he led plenty of them against the best in the business. The closest he came was the 1987 Superbowl of Motocross at the Los Angeles Coliseum, when the heavily favored Rick Johnson went down in the first lap and gave Cooper more than nineteen laps of freedom to lead the way, only for RJ to make the pass at the very end. He also led the 1990 Atlanta Supercross down to the final lap, only for Jeff Ward to steal it with a few turns to go.

3. MICKY DYMOND: Another bona fide 125cc specialist, Dymond won two outdoor titles in 1986-'87, but never quite put it together on a 250cc bike indoors. He was a full-factory rider slugging it out in the premier 250cc Class while Honda Support riders like Larry Brooks, Keith Turpin, Kyle Lewis, Larry Ward and Mike Kiedrowski were able to notch 125cc race wins. Micky was a badass, but so were Johnson, Ward, Lechien, Glover, Stanton, Bradshaw, etc...

4. ROBBIE REYNARD: Another astonishing never-won-in-SX is Robbie Reynard, who just seemed snake bitten inside stadiums (and really never lucky anywhere else). He led some big races, only to have a mistake or a problem at the end. And the injuries to his wrist in his very first 125cc Supercross race (San Jose '93) stayed with him seemingly forever. When Reynard was absolutely on, he could be the fastest man on the planet—see Unadilla 1998—but that was only during the day. It was during the night that Robbie couldn't find his way to the front.

5. MIKE ALESSI: We will argue with anyone that Mike Alessi belongs among the very best—if not THE best—starters in our sport's history. Which makes it very puzzling that he somehow never managed to win an AMA Supercross main event in either class. The #800's Achilles Heel has always been the whoops, but even on nights when he seemed to have that sorted, he came up short elsewhere. He's won a whole bunch of outdoor nationals, and he's always been fast on any size bike, but the checkered flag never fell for him in AMA Supercross in either class (though his time in the 125cc class was extremely short at just two seasons). It's a shame that Mike hasn’t gotten that win, because he has certainly put in the work to make it happen. Here's hoping it somehow works out in 2017.

6. MICHAEL BYRNE: Okay, if there was a list to simply place the single best rider in AMA Supercross/AMA Motocross history to somehow have never won a race, it's Byrner. World-class indoors and outdoors, his long career was plagued by wrong-place/wrong-time scenarios, including those years when he was up against many of the very best in the sport's history: Jeremy McGrath, Ricky Carmichael, Chad Reed, James Stewart, Ryan Villopoto, Ryan Dungey. None of those guys left a lot of wins on the table for a gamer like Byrne, and the shitty part is that we can say with absolute certainty he should have and would have won that race at Unadilla where he broke his leg and ended his career while leading by a country mile... Dang.

7. JUSTIN BRAYTON: One of the sport's all-time nice guys, Justin Brayton has made a career out of hovering around the podium. He's been on it often, but never in the middle of it. Like Lamson and Alessi, he's had plenty of chances in both classes, but the full-15 or full-20 have never quite panned out. Like Alessi, he's still active, and it could still happen in 2017, and like #800, we hope it somehow happens for the #10.

8. GEORGE HOLLAND: There's another list where the quiet almond farmer named George Holland might make an argument for #1, and that's as fastest minicycle racer ever. He came out of Central California on an R&D Suzuki, blew some minds with his 85cc speed, and then got thrown right into the deep end of the pool in 1981, pre-125cc SX class. But Holland could have ridden that class for Suzuki in '85 or '86, like younger prospects Bob Moore and Mike Healey, but he stayed in the 250s with the sharks. He won a 125cc National MX Championship in 1988 for Honda, then got hurt in a supercross race in 1989. Not long after he was back to almond-farming, a motocross playground legend in Kerman, California.

There are actually a few other guys just like Holland--125cc outdoor riders but 250 in SX in the highly-competitive eighties/early nineties --  who deserve mention here, including Erik Kehoe, Keith Bowen, Scott Burnworth, AJ Whiting and more. They straddle that 1985 line with their careers, but never raced 125cc SX and an easier route to stay off this list.

9. NICK WEY: A fan favorite throughout his career, NYK 27 had plenty of podiums over the years in both divisions, not to mention a 125cc National win against Ricky Carmichael, but a supercross win was always elusive, even when he raced at his hometown Pontiac Silverdome round, where he podiumed three times in the 125 class. Wey was still racing this season, albeit as a fill-in rider with Team Tedder. His window to win an SX is likely closed now, but he still had a long and successful career as a pro.

10. BRETT METCALFE: Another Australian import, Metty was competitive on any-sized motorcycle, and has raced for nearly every brand on the track now. Somehow, he never got himself a win, and the closest he came was probably the 2003 Pontiac SX, where he was leading the main event before a blown shock on his KTM SX 125 threw him off. Years with Yamaha of Troy, Monster Energy/Pro Circuit Kawasaki and GEICO Honda added many more near-wins, but it was finally on a Suzuki 450 that he broke through for a win—at Southwick in 2011. He never quite got there in the stadiums.

11. RYAN MORAIS: The Californian just might be the 125/250 rider with the most podiums (14) but no wins in AMA Supercross. He was destined for great things in supercross, hand-picked to be the 125cc face of Jeremy McGrath's Chaparral Yamaha team nearly 15 years ago, but then went out and snapped his wrist in practice at the Anaheim opener. He would battle back from that over time and even found himself in title contention through consistency, but Morais could never quite reach the finish line first. Today, he tests for Red Bull KTM, and Ryan Dungey likes to call him the team’s secret weapon.

12. ZACH OSBORNE: If you thought 2016 would be the year that Virginia's Zach Osborne finally got on the scoreboard with a win, you are not alone. Having spent a considerable part of his career in Europe, Osborne has been back in the States full time for several seasons now, but a win just hasn't been in the cards. Zacho finished second three times this year alone! He has almost as many podiums as Morais without wins, but unlike Ryan, he still has a shot to get off this list in 2017.