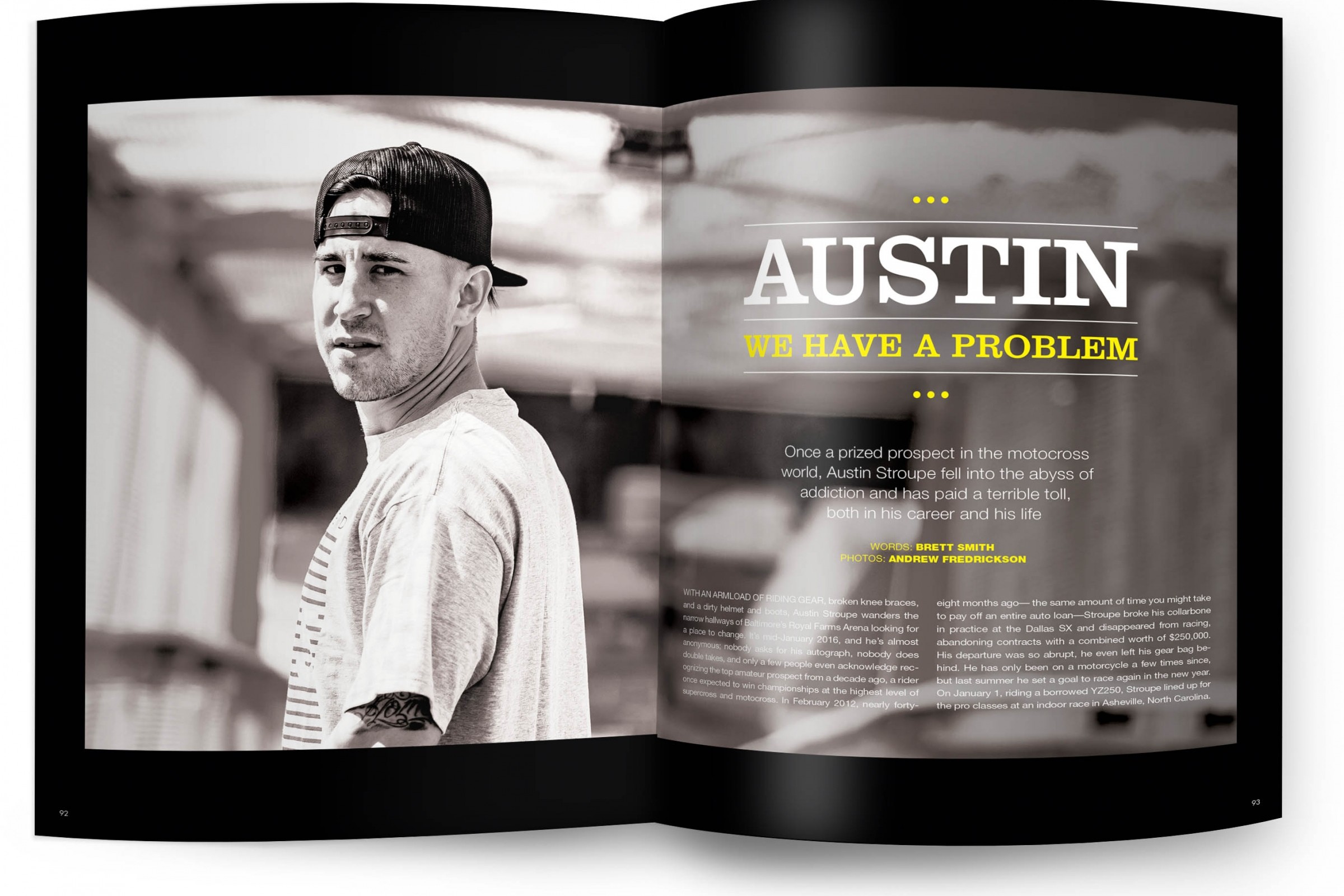 In the Mag, On the Web Telling Austin Stroupe's Story

Austin Stroupe, once one of the sport’s top prospects, comes clean about his struggles with addiction and his fight to get his life back. The full story can be read in the July 2016 issue of Racer X Illustrated. This is how the story came together.

The issue has been shipped to subscribers and will be available for purchase on our Current Issue page when print copies arrive. Want your copy now? Subscribe to get instant desktop and mobile access and a Malcolm Stewart cover shirt. You can also subscribe via Apple Newsstand or Google Play for mobile-only access.

I didn’t know Austin Stroupe at all before I asked him to tell me everything. If I met him in 2007 or 2008 when I was producing the Pro Motocross Championship for SPEED TV, I don’t remember it. On January 15, 2016 I tracked him down in the basement of the Royal Farms Arena in Baltimore, Maryland. He knew I was a writer and that I was looking for him because we had a brief text message exchange during the week but I didn’t fully reveal my intentions; that needed to happen face to face.

When I found him I shook his hand and, with very little preamble, told him that we were going all the way with this article but that if he only wanted to be vague and tell me he made some mistakes in his life then we would go our separate ways right then and forget about it. I have little patience for writing about subjects that don’t want to talk. It’s well within one’s rights to want to keep private and I respect that and didn’t want to lead him on and then later start surprising him with questions he wasn’t expecting.

Metaphorically, I punched Stroupe in the nose and he was taken aback a bit but I told him the reporting process would be serious, respectful and the content would remain confidential until the story broke. With a sly smile he said, ‘Wow, OK, but can we wait and meet after the race?’ I agreed and shadowed him for a couple of hours— track walk, rider’s meeting, setting up his bike, etc.—and then I went home for a few hours to prepare for the interview and find out everything I could about Austin Stroupe.

I wish I could tell you that I was a sleuth and had been chasing this story but the real—and unglamorous truth—is that this website’s Managing Editor, Chase Stallo did that work for me. He knew I lived in Baltimore and he knew that Stroupe was planning on racing the Amsoil Arenacross round there. Being a contributor to Racer X Illustrated since 2000, well, it was all a perfect coincidence. I wouldn’t have pursued Stroupe on my own so Stallo gets credit for being the detective here.

At home I vacillated between internet searches and contacts in my phone. I hastily crafted a timeline of Stroupe’s career and called everyone I knew that I felt should know something about what happened to Austin Stroupe, especially what led to (and what happened during) his disappearance from 2012 to 2016. My sources only had assumptions and rumors and several said, “I have no idea, this is the story everybody wants to read.” I called former trainers, sponsors, writers and broadcasters and, while I did get some leads and advice, I concluded that this truly was an exclusive current event story about a subject that nobody in the motorcycle industry had openly discussed.

After the race Stroupe and I walked to a PF Chang’s and spent nearly two hours talking about various subjects. Maybe it was just good timing that I found him at the same time he was interested in telling his story but I operated under the simple assumption that nobody else had seriously, and respectfully, asked him to tell it. Even so, there were moments of hesitation and deeply personal details that he admitted were embarrassing that he didn’t want misinterpreted.

After the interview I knew I had a general overview of his life/career between 2007 and 2016 but there was still a lot of details to cover and a lot of black holes to fill. We spoke on the phone a few days later and agreed that it would be best if I met him in South Carolina, where he was training, to continue talking. I got busy with other projects, he picked up support from Husqvarna and progress was delayed.

Then, on March 10, 2016, he was arrested and the charges all but confirmed what everyone thought they knew about Austin Stroupe: he has a drug problem. Just because a person is caught in possession of heroin doesn’t mean he’s an addict but it was enough to nearly melt down the moto internet. We decided to push on with the story whether we were able to speak with Stroupe again or not. After the arrest, I spoke at length with his father, Todd, but I felt that I had an incomplete story. Of all the sources I spoke with, including his mother and father, team managers, teammates, etc. Austin was the only one who could really help finish it.

And then late one night he called. He was only one day out of jail and he wanted to keep talking. We spoke on the phone twice more, for great lengths, and each time we talked about new stuff but also went into deeper detail about what we had already discussed. A lot can happen to a man in nine years and a lot can be suppressed or completely forgotten. This process helped unearth a lot of demons for Stroupe and, at one point, he said talking was almost like therapy.

When we knew the article was coming together we thought about the artwork and decided that the majority of the photos had to be current, off the bike, no helmet and not dominated by logos. We didn’t want anything to take away from the human side of the subject. Austin was gracious enough to allow Andrew Fredrickson and Jordan Roberts to visit him at South of the Border in South Carolina for a photo shoot.

The transcriptions from Austin’s interviews alone span over 70 pages of text and 25,000 words and there are still anecdotes, details and information that had to be left out. The finished piece is just shy of 4,000 words, double the length of a regular feature in Racer X. The total reporting/writing/editing process spanned over three months and the article can be found in the July 2016 issue. While the story is about one man’s life, we know that many others may find similarities and confirmation that they’re not alone with their struggles. Others may see a cautionary warning and some may cavalierly dismiss the whole story as yet another waste of talent. Whatever your judgment is, we’re confident that there is a powerful takeaway. Stroupe was courageous in telling the truth; that’s the best story of all.