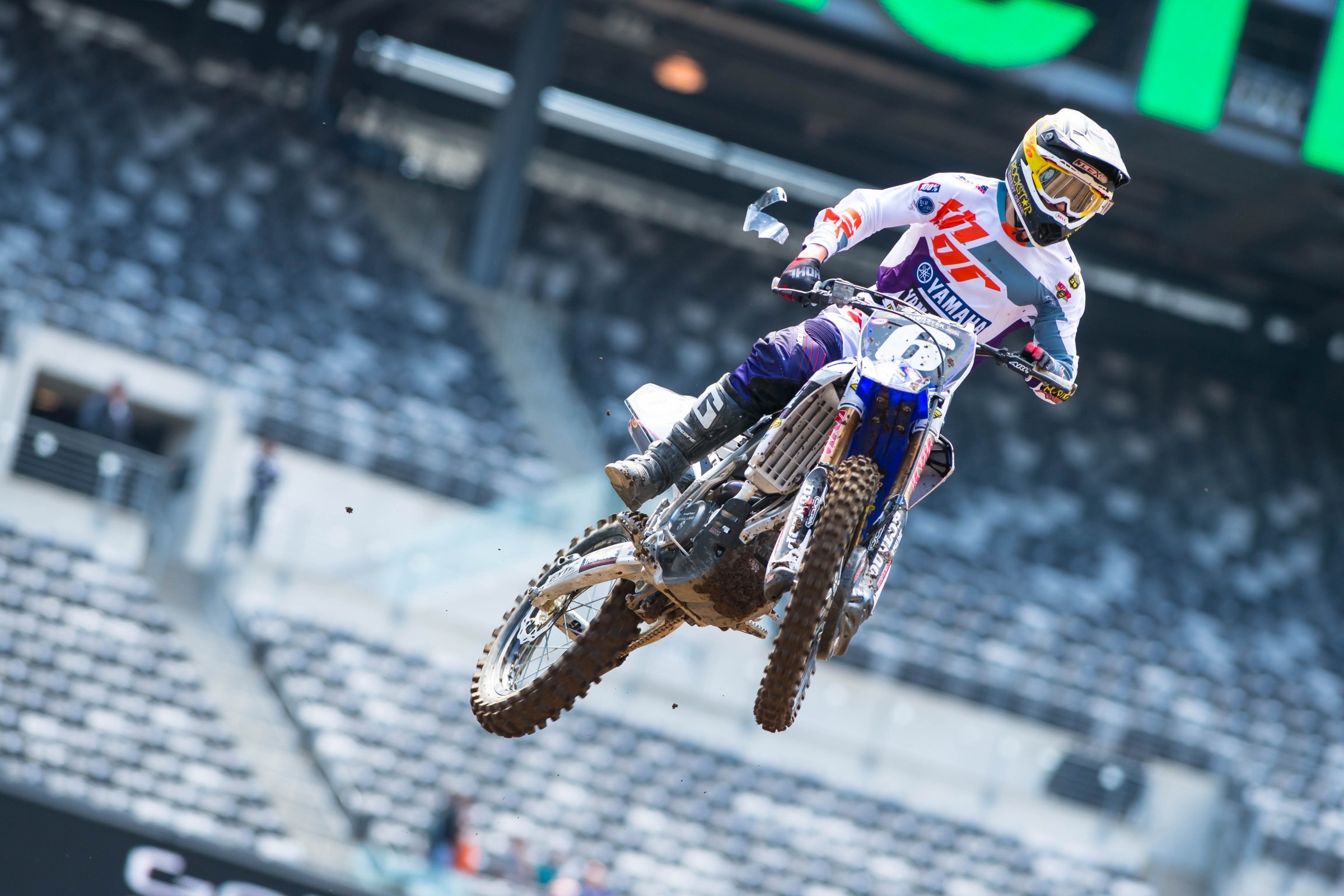 In ten years, or whenever we decide to look back at Ryan Dungey’s 2016 season, marveling at his tenacity, and consistency, we’ll see 31 straight podiums next to his name and think, “Wow, did this really happen?” Sure did. Yes, the streak is over, but that record may stand for quite some time. The King of Supercross couldn’t pull it off. Neither could the GOAT. Or James or Chad or Villopoto. Dungey went more than a full calendar year without finishing off the podium. His streak began on January 10, 2015 and ended on April 30, 2016. Accomplishing the big goal was his sole focus Saturday night, but Dungey admitted after the race to our Jason Weigandt that the podium streak did come into play late in the race.

“The goal was the championship but the podium streak, I was definitely going after Cole Seely just to try to get on the podium,” Dungey said, before finally revealing he had been dealing with quite a bit of pressure maintaining the streak and the points lead. “But a lot of people have got to remember that it’s been a fight. Just mentally battling week in and week out, a lot of riders have been challenging us, different riders across the whole season.”

Dungey’s third 450SX title moves him into a big tie for fourth on the combined all-time AMA National Championship (450 and 250MX; 450 SX) list. He only trails Ricky Carmichael (15), Ryan Villopoto (9) and Jeremy McGrath (8). Jeff Ward and Ricky Johnson have seven titles, like Dungey. He can move into a tie with McGrath if he successfully defends his outdoor championship. Currently at 30 wins (sixth all-time) in supercross and 87 podiums (tied with RC for third all-time), Dungey is moving up the record books too. Where does his career rank all-time? Steve Matthes, Jason Weigandt and Jason Thomas debated the topic earlier this week.

For his part, Roger DeCoster said he ranks Ryan at the top as far as “dedication day in and day out. “[Jeremy] McGrath was awesome. Ricky [Carmichael] was awesome. A lot of them were awesome,” he told Racer X. “But his dedication that he has at every race, every day of the week, is really exceptional.”

It was another flawless performance from Ken Roczen, who led start to finish and stretched his lead to nearly 20 seconds by race end (19.687 to be exact). Combined with his 9.022-second win last weekend, Roczen has won the last two rounds by an average margin of 14.354 seconds. How dominating is that? Consider this: In the 450 Class this year prior to Foxborough, the average margin of victory has been 2.61 seconds. The largest margin of victory prior to the last two rounds? Roczen’s 4.540-second win at Glendale.

“Two wins in a row. That’s awesome for the team,” said Soaring Eagle/Jimmy John’s/RCH Suzuki team manager Kyle Bentley in a team statement. “I’m super stoked for Ken. It was another dominating night for him.”

Of course, it was too little too late for Roczen, who had to watch on as Dungey celebrated a third consecutive title at his expense. “It’s a little bittersweet,” Bentley continued. “We lost the championship but we have momentum. We’re looking forward to Vegas, trying the get the final win of the supercross season and carry that into outdoors. We’ll see if we can’t come away with the championship out there.”

Roczen is certainly looking forward to the Lucas Oil Pro Motocross Championship and even said he skipped supercross practice prior to East Rutherford to focus on outdoors. “I was just riding outdoors and flew straight here. I haven’t ridden since Tuesday, so it was pretty long,” he told us.

Also hitting his stride just in time for Lucas Oil Pro Motocross is Eli Tomac. Like Roczen, Tomac has credited bike changes for his rapid turnaround (Kawasaki recently made some staff changes behind the scenes that seemed to have helped Tomac. Eli had brought his own suspension tuner to the team, but he has now been replaced by traditional Kawasaki and KYB staff). For the first time this season, Tomac found the podium in back-to-back weeks. “I feel like we’ve been good the past three weeks and we’ve at least gotten two podiums the times we’ve done it. It’s changing. At least I’m back to the front, where before I was scratching my head wondering why I was getting beat so bad,” said Tomac, echoing his thoughts from last week. “So now I can do what I want to do and race the track the way I want to and go where I want and I can fight for the top spot. It’s good to be here now and really I’m just looking forward to the next SX at this point.”

Honda HRC’s Cole Seely says he’s still dealing with pain from a broken vertebrae that he sustained prior to Santa Clara. Seely only missed three rounds, returning last weekend in Foxborough. On Saturday, Seely put in arguably his most impressive performance of the season as he held Dungey at bay for thirteen laps.

Dungey moved into third on lap 8. Check out Seely’s and Dungey’s times from laps 8-20:

Visions of some of Trey Canard’s bigger, season-ending crashes rushed to mind as he flew through the air, sans his bike, over a triple, as he appeared to clip a Tuff Block in the first practice session. “I’ve had smaller crashes and not been able to walk away from them, so to have something that bad and basically come away unscathed is very lucky.” Canard said in a team statement.

“Trey’s crash was one of those spectacular crashes; now that he’s okay it’s fine to talk about, but it was scary and didn’t look like something he was going to walk away from,” said Canard’s mechanic Brent Presnell. “He hit a soft spot with his rear tire on the face of the triple and just lost it and ended up flying through the air without his bike. Then he went out and laid down the third-fastest time in qualifying.”

Our own Simon Cudby happened to be in the right spot and grabbed a sequence shot of the crash. Trey’s wife, Hannah, also posted a video of the crash.

|| Had a get off in practice Thanking God he's okay. Got out of it with a sore butt muscle. Could've been worse

Canard would go on to finish eighth in the main event. “I wasn’t able to make passes quick enough and then lost some positions at the end to [Jason] Anderson and [Marvin] Musquin. All in all though, I’m looking at the positive and am thankful I’m healthy,” he said.

For the second straight week, Jason Anderson found himself off the box. While a brake problem was the source last week, this week it was starts as Anderson rounded the first lap in twelfth. “I ended up with ninth gate pick in the main so that heat race didn’t help me out the entire night,” he said in a statement. “I actually rode really well and came up from 12th to finish 6th. I almost had 5th, but I’ll make a comeback next weekend in Vegas. The track was good, but it was really tough to make a pass on. There was only one right hander."

Since returning from a wrist injury in Indianapolis that cost him 10 rounds, Broc Tickle had his best finish with a thirteenth Saturday night. “It was an improvement from last week,” he said in a team press release. “I got a better start in the main than I did the last couple of weekends. I was in the mix there with those guys but if I could’ve been just a little better this week, it would have been a really good night. I felt better on the bike and more comfortable riding in the pack. I just need a little more intensity and speed throughout the race and I’ll have a good result. I just need keep building. I’m not too pumped about finishing 13th but it’s a step in the right direction.”

For a majority of the nine-round 250SX East Region, it seemed like no one wanted to win it. The series has featured five different winners, a points leader lose a race due to visa issues, and another race winner (Justin Hill) miss all but three rounds due to a concussion. Just a ton of storylines in this class. But after a win on Saturday, Malcolm Stewart has taken control and leads by fourteen points with just one round to go. Malcolm, always an open and honest interview, admitted the title affected him last weekend.

“Last weekend, I think I focused on the points too much,” he told Racer X. “This weekend I said “You know what? The points don’t matter. I’m just going to do the best I can do tonight.” You know what? That’s what I did and look where it got us.”

Check out how the points have fluctuated since Round 4 in Detroit.

Jeremy Martin sits another five points back of teammate Aaron Plessinger and told Race Day Live! after the race that he knows the championship is most likely out of reach. “It’s a long shot to be honest, but we’re gonna go into Vegas and enjoy the event—it’s one of a kind.”

Martin went on to say the tricky dragon’s back was giving him trouble all night. “It was pretty tough. The last one had a pretty big G-out in it, and it was catching me just enough to where I would case it and couldn’t get the next three in the rhythm.”

Second-place Davalos also admitted the dragon’s back—and the whoops—were the sections where Stewart made up all of his time.

Shane McElrath’s hot streak continued on Saturday night. His fourth place finish was his fifth straight finish of third or fourth. ”I know I should be happy with fourth because of how we started the season, but I am definitely hungry to get back up on the podium,” said McElrath in a Troy Lee Designs/Red Bull KTM statement. “I am happy with my consistency the past several races, so hopefully we can do the same next week in Las Vegas and head into outdoors healthy.”

Quote of the night belongs to RJ Hampshire, who after a twelfth place finish found some inspiration in Johnny Cash:

“You build on failure. You use it as a stepping stone. Close the door on the past. You don’t try to forget mistakes but you don’t dwell on it. You don’t let it have any of your energy or any of your time of any of your space,” go the lyrics Hampshire quoted. He then added on his own, “One thing about my struggle bus, it doesn’t stop rolling. Ready to have some fun in Vegas!”