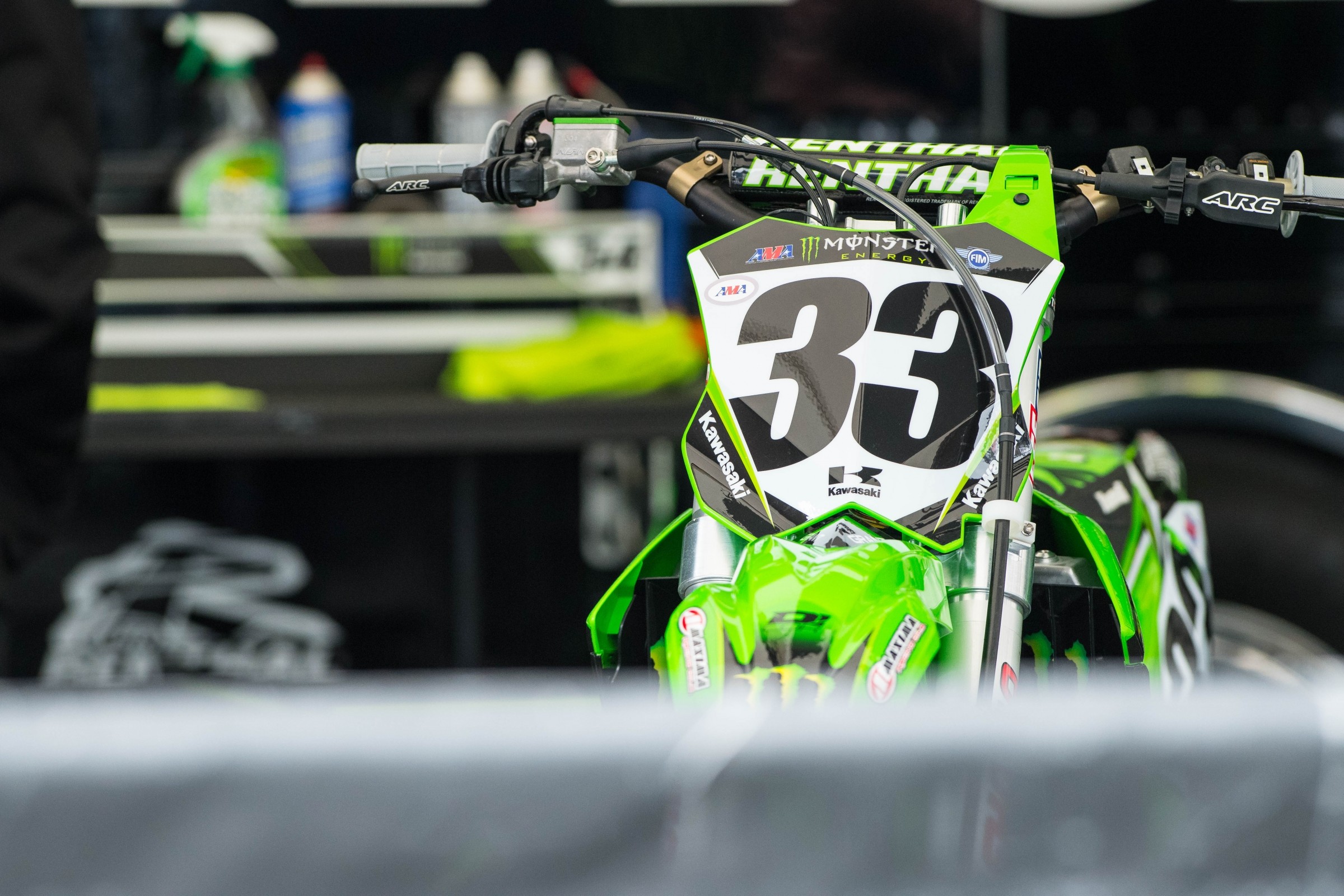 Last week the dirt in Indianapolis made for the most rutted and beat track of the year—if you caught the broadcast you even saw officials filling in some nasty peg-draggers on the finish line jump. Well, we could be in for more of the same, as the tacky St. Louis dirt, widely considered the best on the circuit, has a reputation for rutting up big time. Will it be as gnarly as Indy? Former GNCC racer Aaron Plessinger probably hopes so, but we’ll just have to wait and see. –Aaron Hansel

Ken Roczen has been all over Ryan Dungey the last two races, not giving the champ an inch of breathing room. If you’re Roczen, who came up just short in both battles, it’s got to be frustrating to be so tantalizingly close, but for the fans it’s been incredible—the action has been outstanding up front! Let’s hope they both get identical starts in St. Louis. If they do, we’re in for yet another epic duel. –Hansel

Before the season we were wondering who would emerge as the dominant force in 250SX East Region, and now, five races in, we still are! Not a single rider has won more than one race this year, and three of the winners, Martin Davalos, Jeremy Martin, and Justin Hill, have all encountered major problems so far. Will we finally see someone step up and win their second race of the year? If not 250SX East is going to have six winners in as many races. –Hansel

What a night for Monster Energy/Pro Circuit Kawasaki fill-in rider Gannon Audette! The squad’s newest recruit repaid the team for taking a chance on him by earning a podium on an extremely tough track. Not only was it Audette’s best career finish, it was, shockingly, the first podium of the season on the East Coast for Monster Energy/Pro Circuit Kawasaki. Audette’s still looking for a ride for Lucas Oil Pro Motocross, but if he keeps putting in rides like this, he won’t be looking long. –Hansel

After crashing out of the main last week Jeremy Martin only earned a single point, all but putting the final nail in his championship coffin. Sure, it’s not over ‘till it’s over, but c’mon, even in a season as crazy as we’ve had so far, twenty-eight points is an awful lot to make up in just four races. But that doesn’t mean Martin doesn’t want to finish out his season strong, especially considering the next four 250SX races are the last ones he’ll ever race in his career. Look for Martin to rebound and land on the podium in St. Louis. -Hansel

Boy did Yoshimura Suzuki need this. Blake Baggett put together a solid run in the Indy ruts to net fifth, which is not only the first top five for the team all season, it’s only the second top ten (Baggett was tenth the week before in Santa Clara). Baggett and teammate James Stewart have missed 16 total races out of 26 opportunities. Is Baggett’s strong result the sign of things to come, or did the 2012 250 National Motocross Champion just excel in the ruts? We’ll see. –Jason Weigandt

Anaheim 1 is always filled with hope for so many riders, but heading into the first main event of the year, I personally thought Trey Canard stood the best chance of winning. I know it was #stacked, but through three practices and the heats, Trey looked the best of anyone, and when he passed Ryan Dungey to take over second early in the main, it looked like a victory was coming (all Trey had to do was pass his teammate Cole Seely, which he had done to win the heat race). But Trey had a crash that night and finished seventh, and amazingly after 13 rounds he still doesn’t even have a podium finish. Practices and heats have been strong all year for Trey, but his main event starts have been terrible. If he can just get off the line well once when it counts, it’s on. –Weigandt

Josh Grant was once known as a win-or-crash crazy charger, but in his later years he’s actually logged quite a few solid, quiet rides. Since jumping on to the Monster Energy Kawasaki as a replacement for the injured Wil Hahn, Grant has finished twelfth in all three races. Can’t get much more consistent than that! JG would probably like a top ten but it would be wild if he grabbed twelfth again. –Weigandt

No one doubts Christophe Pourcel’s talent, but there have been detractions about his desire. He used to throw out the idea that he only rode jet skis during the week, he’s been tentative at times due to massive injuries suffered in a GP years ago, and he hasn’t looked very racy in his return to Monster Energy Supercross this year (he sure is fast in practice, though). But lately he’s taken some hits and shown he can bounce off the mat. A neck injury resulted in a few weeks off but he immediately came back to log the fastest qualifying time last weekend, then he hit the ground hard in his heat but later came back with a solid main and a seventh, his season best. We still don’t know where the ceiling is for Pourcel on a 450. Maybe we’ll see him get closer to it this weekend. –Weigandt

Ryan Dungey is still trying to win races, even though he’s sitting on a massive points lead. The shame for Dungey is he’s up by 45 points, which puts him in reach of a 50-point gap, which would allow him to wrap the title two races early. Hmmm… where could Dungey have found five points? How about in Detroit, where a penalty dropped him from first to third, costing him exactly five points. He’ll need to stretch his gap a little more on Roczen to get it to 50 by end of next weekend (which would allow him to clinch), which won’t be easy. Sure, none of this will probably matter in the end because Dungey is so consistent, but keep in mind that St. Louis has hosted some of the wildest supercross races of all time. No title is safe until it’s officially locked up. –Weigandt