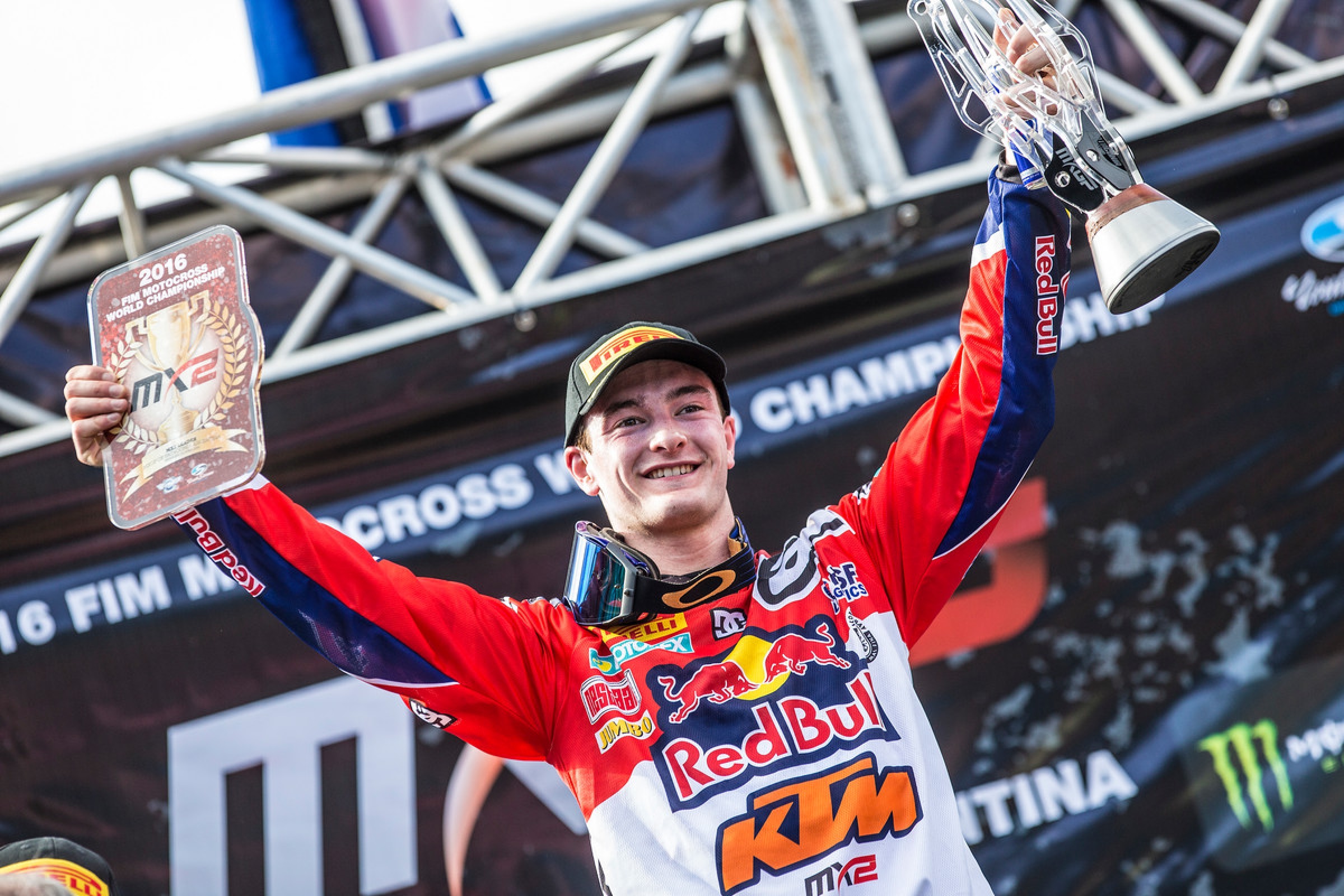 It is tricky to know who is impressing more in MXGP at the moment and after four of eighteen rounds in the 2016 campaign: Red Bull KTM’s Jeffrey Herlings, who has led almost every lap in MX2 and looks as unshakeable as he did in his 2013/early 2014 pomp, or Honda Gariboldi’s Tim Gajser, who picked up a second MX1 victory through the fast, sandy-ish bumps at Neuquen for the second Grand Prix of Patagonia Argentina yesterday. It’s was just his fourth event in the MXGP class and on the works CRF450RW.

Those riders that travelled to the depths of Patagonia last year for the first trip by MXGP to Argentina this century knew what to expect from this second edition: stunning geographical beauty, a wide, open American-style circuit forged from a loose volcanic soil, zealous and passionate fans almost unrivalled for their enthusiasm for motorcycle racing and a busy, crowded fixture in which the top stars warranted their own security detail. There is a good chance that many of the Grand Prix riders were not expecting the low temperatures and chilly conditions that forced hats and coats to be an essential part of the uniform across the weekend and maybe some more were surprised that the Neuquen layout was as tricky as they found it in terms of large holes and a solid base that gave the surface a slippery edge. Adjectives like sketchy seemed to be thrown around a lot in comments.

In MXGP, Gajser ruled after going 3-1—the second moto was won in dominant fashion after earning the holeshot and the reigning MX2 Champion set off from first in the gate after his maiden Qualification Heat victory on Saturday. So far the nineteen-year-old Slovenian has proved adept on the bigger bike in a range of conditions and circumstances. He was unchallenged in the second sprint but faced sterner opposition from 2015 winner Rockstar Husqvarna’s Max Nagl in the first moto with Red Bull KTM’s Tony Cairoli starting to find his mojo as the 222 took a double 22 points on the day. “I took my first qualification win on Saturday, which I was pleased about and then a holeshot in the second moto; it was a great weekend,” said Gajser. “There were many lines to choose on the track and it was a really nice to ride.”

Gajser may have recorded his fourth consecutive podium—now going 1-2-3-1 in the rounds to-date—but he couldn't seize the red plate from a frantic and irritated World Champion Monster Energy Yamaha’s Romain Febvre. The Frenchman still controls MXGP by just three points, but a fourth overall in Argentina ended a sixteen-event podium streak stretching back almost a full calendar year. Febvre made three key mistakes involving a hashed start and a fall in both motos that meant a long and active day of barrelling past opponents, regaining ground and taking risks to recoup the damage caused. He went 6-3 and his chase to the top three by debunking teammate Jeremy Van Horebeek in the very final stages of moto two was sensational stuff, even if the prompt of his excellence was rooted in a rarely-seen fallibility; a trait he will be hoping does not appear again any time soon. Even world champions can learn.

It was another (multi) title winner who wrapped his hands around a trophy for the first time in a year and ended a dry streak unheard of in his eight-season tenure in MXGP. Cairoli’s second place indicated that the Sicilian is finally starting to pick away the injury-induced cobwebs. “For sure I’m happy,” he said. “The injury this winter was worse than we thought and it has taken time for me to feel good…and I’m still not 100 percent. At some points on the track I feel that I don't have the power to hold on. It’s good to be back on the podium and I’m starting to feel a bit more like myself but I am missing race pace and in the first ten minutes I am still a bit slow. Race by race I am feeling better so I’m looking forward to battling more.”

Cairoli also gave some more insight into the inviting Neuquen layout. “The track is really nice but it is not one of the most technical because some places are flat and wide-open,” he mused. “It is a lot of fun and you don't have to risk much to pass. You can find lines and this is good for the sport. The people watching at home can see that we are having a nice race. [At] some of the others—Qatar was OK—people could see it was enduro-style. It is good to have a track where you can scrub, change lines and square a corner without big risks.”

The track bit some. Monster Energy Kawasaki’s Tommy Searle went to the medical centre in the second moto with a suspected broken nose; HRC’s Evgeny Bobryshev was roughed-up with a heavy fall on a jump landing in the same sprint. Riders like Suzuki’s Kevin Strijbos failed to discover their groove and Wilvo Virus Performance KTM’s Shaun Simpson looked ragged and tumbled as well in that second race.

Handling the ground for a second race win at Neuquen and his second MXGP podium in a row was Nagl. The German was peerless earlier in the day but exercised caution when holding third behind Cairoli in the second moto—he would have needed to pass his former teammate for the overall but ended up being swamped by the two Yamahas and crossed the line in fifth.

“In some places the track was really nice to ride and in others was really tricky and I was struggling there,” he commented. “At around half way I slowed a little bit because there was too much risk to try and catch Tony. I’m disappointed because I could have won this GP but this is part of racing…I’m on the podium again so I have to be happy because it could have been a DNF.”

MXGP produced some magic scenes—mainly around Febvre’s progress through the leaderboard—with riders swapping lines and inches from disaster. Monster Energy Kawasaki’s Clement Desalle was a welcome figure back among the disputes and although the Belgian hungers for much better than tenth overall he was more of a protagonist here since recovering from a broken arm and illness. The effects of a virus kept Suzuki’s Ben Townley at home and the New Zealander will also miss the next round in Mexico to try and replenish his strength and energy.

In MX2 Herlings was so quick on the 250SX-F that the Dutchman did not even stick around for the post-race press conference with a commercial flight ready to whisk the twenty-one year old back to Buenos Aires. Herlings is racking up the numbers again in a perfect season so far and now having reached a career total of 100 moto victories. 200 points after four rounds means an absurd gap of 48 in the standings and the lead of almost a GP already. Of course Herlings and KTM have been in this scenario before and when the championship was a lot closer both in 2014 and 2015. Still, with every lap and moto without challenge (he won by 34 and 30 seconds respectively at Neuquen) the MXGP category beckons for 2017 and 84 is allegedly attracting interest for his services from 2018 and beyond.

The best-of-the-rest fell to the eye-catching Suzuki rider Jeremy Seewer who has now accumulated three podiums in four rounds and equalled his tally from the whole of 2015, which was only his second in Grand Prix. The Swiss rider continues to improve markedly. His second position overall was prized after a collision out of the gate in the first moto that sent Kemea Yamaha’s Benoit Paturel to the floor and gave the RM-Z250 pilot a lot of work. He pushed all the way up to fourth and then in the second moto ran to a decent second place that involved emergence from a five rider bevy of action and defence of his rank from Wilvon Standing Construct’s Alex Tonkov, who again made the top three of the MX2 class for the second time this season and moved up to third in the championship. The Russian’s promotion was at the expense of KTM’s Pauls Jonass whose spectacular dismount on the first corner of the first moto was another unwelcome addition to his cannon of shocking YouTube clips.

Rockstar Husqvarna’s Max Anstie was also part of that second moto gaggle until a mechanical issue ended his participation; the Brit had earlier posted second place in the initial race for his first signs of growth into the 2016 term and his last on the 250s. Credit to TM’s Samuele Bernardini for a strong showing to a career-best fourth overall (and proving Italy might have more coming through in Cairoli’s wake) ahead of the steady if distant Monster Energy Kawasaki form of Petar Petrov. Only two weeks after suffering a broken ankle ligament, Thomas Covington was surprisingly quick and resilient on the works FC250 and his 10-10 was a shot of confidence after a rough start to 2016. The American will be glad to head to Leon this week. The site of the third Mexican Grand Prix within the city’s Parque Metropolitano will bring back memories of his first triumph there in 2015.