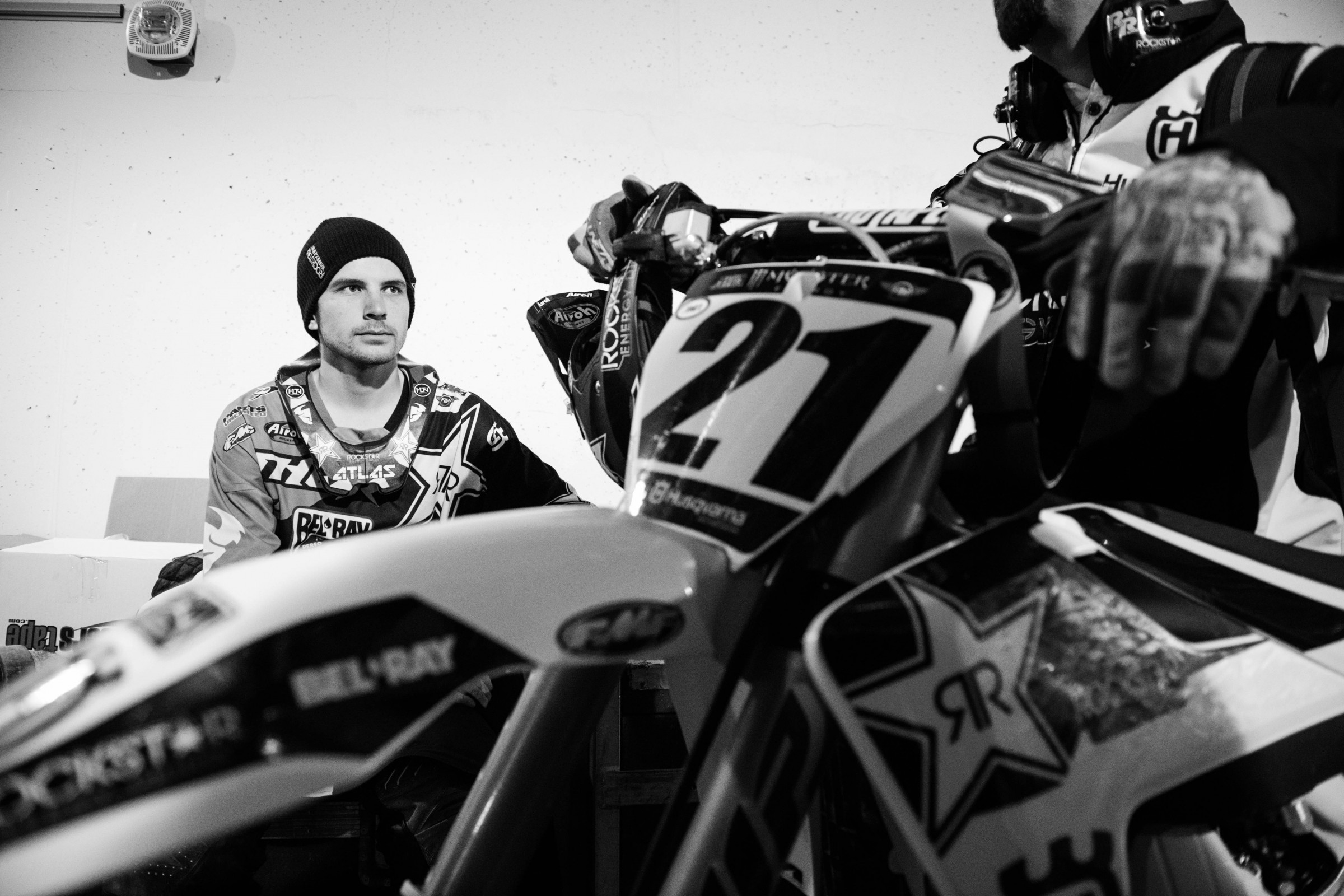 By Chase Stallo and Steve Matthes

Ended up pretty good. My practices went pretty smoothly all day. Made one little change, but for the most part stuck to our base setting. It felt good. It’s hard to say you felt good on this track, but I felt controlled and I was able to do my laps. But it was rutted out there and very, very sketchy. But I made it through and just kind of stuck to my plan and ended up with a podium. Very happy with it.

Did you know you were in a podium spot when you came around and saw Eli stall?
I didn’t know what was going on. I rolled it and I jumped over his bike right here and then I went over… I don’t know what rhythm section, maybe over the triple. I came back through the turn after the triple and saw the board and I saw I was in a podium spot and I was pretty surprised because I wasn’t up there at the beginning. I think I was like ninth. I was battling with those guys in the back. But it’s cool to do what I did and [ride in] control. It’s kind of something that these types of tracks bite me. But I made it through and a podium’s awesome.

Lapped riders, how bad was it out there?
It was bad. It was easy to get lapped just because the track was short. It’s so easy to take a little crash here or there, so it was tough.

Did you guys change your strategy at all with the ruts and stuff, the way you ride?
You’ve got to stay patient.

When Ryan and Kenny are so out front, is it hard to stay patient?
It’s hard to even just see your pace or whatever. It was kind of just me and Trey [Canard]. For me to actually go up and catch him… It’s impossible. – Chase Stallo

Racer X: It’s not podiums where you want to be, but you’re turning the corner. I think more consistent, better finishes. Start not so good tonight but you worked your way up to a decent finish.
Trey Canard: Yeah. I was in third at one point, right after Tomac stalled it. But it was like a tenth of a second. I couldn’t remember if Anderson had passed me before that or what. It was a better night. It’s still not where I want to be, but it was better.

The track was unbelievable. It was a real challenge for everybody.
I’ll tell you how bad the ruts were: I could see the timing and scoring loop [the pipe with cables in it, under the dirt] on the finish line. It was sketchy. Once I was in fourth and I wasn’t going to be able to mount a charge on Anderson I was like, just back it down and be safe.

Yeah, so at some point you’re like, let me just make sure I’m lined up in all these ruts?
Yeah, it was sketchy, especially that back section we were going triple on and off. You’re literally taking off in a rut, landing in a rut on the tabletop, landing in a rut. It was pretty sketchy.

Did you have some moments where you were puckering up a little bit?
A few, but it wasn’t bad. When Anderson got me I had kind of gotten kicked off that dragon’s back. But other than that, I did pretty good as far as sketchy moments.

I didn’t know you were in third, but briefly you were. But you’ll take it.
I don’t think I was in third but for maybe a tenth of a second. I thought that Tomac stalled it just before Anderson got me. – Steve Matthes

Racer X: Bad starts, but also too I’m guessing you weren’t really having a lot of fun out there.
Chad Reed: I disagree with you. I actually had good starts; I just didn’t get around the first turn like I needed to. Solid start in the main.

The first time I saw you, you were probably like ninth or eighth.
Fourteenth on the first lap. So it would appear that my start wasn’t good, but my start was actually pretty good for me. I was pretty happy with it. But it was just my first turn and first rhythm that was the problem.

And then from there, long way up to sixth.
Yeah, long way. It’s crazy back there in the pack. Anderson was about three or four places in front of me. I kind of saw him and I was trying to latch onto him. But I want to say it was [Weston] Peick and [Justin] Bogle that I just didn’t really get around clean and go. I took too long. So I kind of spent two or three laps with that. And then I started to get my rhythm going and actually felt like I rode pretty good. I had some issues at the end of the moto.

Bike or body?
Not me. So I’m good and healthy. But we had a little bit of an issue there at the end that kind of stopped progress and I had to ride out for sixth.

It was one of those tracks… It was old-school Indy, old-school Seattle. It was gnarly.
I didn’t race it but I was here as team owner when [Dean] Wilson rode my bike 2014. It seemed like it was actually maybe worse that year than this year. But the transitions were tough today. We struggled from the first practice. We kind of have this opposites going on. Typically I don’t love the hard pack but the bike combination is better on the hard pack. And then typically I like East Coast but then we’re struggling more on the East Coast. I knew today after seeing pictures of press day being really rutty, just kind of predicted a pretty tough weekend. But with saying that, I really think that we learned a lot today. Every time on the track we tried some things and I felt like we made some progress. So from where we started the day and then the result on paper doesn’t look amazing but I think that we made some good progress today. So I’m interested to take what we learned and take it into a more normal race and see if it translates.

Next week won’t be this rutty but it’ll be good traction and good dirt, so you’ll maybe be able to figure that out next week.
Yeah, St. Louis is probably some of the best dirt there is. But then you never know. It could be this rutty. It’s been kind of the similar weather and if they bring it in wet… I don’t know if monster trucks have been there or if it’s covered or however that works. But there is the possibility that it could be soft. But I’m excited for that race. – Matthes