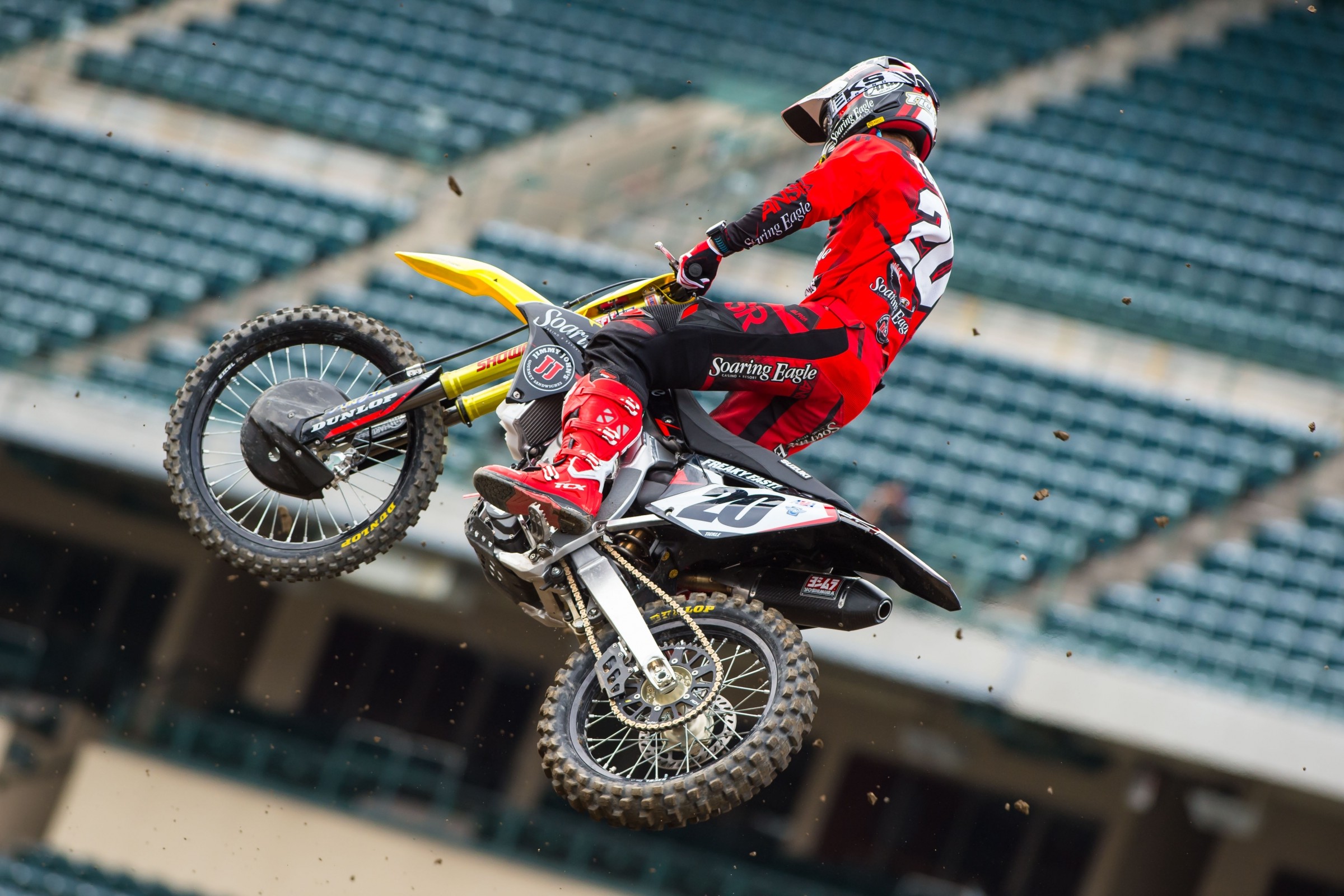 Not the historic Marlon Brando movie about the motorcycle riots of Hollister, California (Google it, kids, it’s a piece of motorcycle history), but the unpredictable state of affairs we call the 250SX East Region, where every single title contender has had a night that would normally throw a spanner wrench into a championship run. For example, Jeremy Martin finished thirteenth in Detroit yet only sits seven points behind championship leader Malcolm Stewart. A week before Stewart was taking over the points lead, he was riding around with his jersey torn off after a brutal first-turn crash. And Martin Davalos wasn’t even at that race due to visa issues, but he’s still in the hunt, too. (Pity poor Justin Hill, though, who is out for the weekend again.) There are still five races left, and it doesn’t get any crazier or more unpredictable than it’s been out East. –Aaron Hansel

Monster Energy/Pro Circuit Kawasaki’s Tyler Bowers hasn’t quite had the presence we thought he would in the East. That said, he has won some heat races lately and even posted his best finish of the season, a fourth, in Detroit. We know he’s got the speed to win one of these things if the cards fall his way, and with four winners in four races so far, it’s not hard to think Bowers is next in line to take the checkers. –Hansel

Next in Line Part II

All that next-in-line stuff we just said about Bowers could also apply to Yamalube/Star Racing Yamaha rider Aaron Plessinger, who’s placed second a few times in his career but has yet to take a win in Monster Energy Supercross. Aside from a twelfth in Toronto, where he was involved in a first-turn crash, Plessinger has been quite solid, with his worst finish, a fifth, coming in Daytona. And he was even sick that week! So far this year, Plessinger has been on the left and right side of the podium, but he just might be in the middle in Indianapolis. –Hansel

We’re not sure who rode Justin Barcia’s bike in the main last Saturday night in Santa Clara, but whoever it was got lapped and finished in sixteenth place. Definitely not the same Barcia we’ve seen in the past—but then again, it was his first race back after injury, and he did have a pair of crashes during afternoon qualifying that he said dinged him up pretty good. Barcia is capable of much better results, so while a win (or even a podium) might not be realistic quite yet, expect him to do much better—and stay on the lead lap—in Indianapolis. –Hansel

Things haven’t gone well for James Stewart this year, and that’s a massive understatement. After missing a bunch of races due to multiple injuries, Stewart finally got back to racing again in Santa Clara. He looked decent, too, qualifying seventh and taking second in his heat race behind Ryan Dungey. Things took a turn for the worse in the main, however, when he was forced to pull off with bike trouble. The good news is it was only a mechanical and Stewart is healthy for Indy. Forget Santa Clara, and consider this weekend Stewart’s return to action. -Hansel

Broc Tickle returns to action this weekend after missing ten races with a broken wrist. With his replacement, Jake Weimer, staying on board, Soaring Eagle/Jimmy John’s/RCH Suzuki will have three Suzukis in operation (with Ken Roczen rounding out the squad) for the first time ever. “I’ve been riding for about two weeks, and I’m feeling good,” Tickle said in a press release yesterday. “I’ve been training and keeping up with my cardio since I got the cast on back in January, just trying to do the right things to stay in as good of shape as I can.

“It’s actually been good, in a way, for me. The time off has allowed me to focus on the little things I need to do so I can be where I wanted to be in the beginning of the season. Obviously, the first two races didn’t go the way we were hoping. My goal, after I got hurt, was to work on those little things and to pay attention to what’s working for some of the other guys.”

We’ll see if Tickle can return with better luck than Barcia and Stewart had last week. –Jason Weigandt

Also, Christophe Pourcel makes a return after missing three races with a small fracture in his neck (ouch). After a lowly start to the season, the Rockstar Energy Racing Husqvarna rider was finally starting to show signs of speed and aggression in the main events before the injury forced him out. Since the Frenchman has been very cautious in his return to Monster Energy Supercross this year, you’d expect a neck injury to slow him, but he's never an easy one to figure out. Don’t be surprised to a least see the 377 atop the qualifying charts this weekend. –Weigandt

It’s possible Eli Tomac just waved the white flag on his 2016 supercross campaign. The Monster Energy Kawasaki rider, following a disappointing seventh last week, uttered “I guess it’s a learning year” to our Steve Matthes after the race. The year began with huge expectations for Tomac and his team but features just two podiums, one of them coming from his win at the outdoor-style Daytona Supercross. Last week it was another terrible start and sub-par ride after posting the fastest qualifying time. You’d have to think Tomac’s speed will transfer into laps led in the main event one of these weeks, but time is running out. Wait till next year? –Weigandt

Marvin Musquin was surging with four straight podium finishes (including a near-win in Atlanta), but that drive stalled when he crashed big in practice last week. Marvin soldiered to a seventeenth in the main event. With only a week to bounce back, it will be interesting to see if he can regain his previous form. Plenty of others were happy to see some podium real estate open back up. –Weigandt

We’ve been repeating this mantra: if Jason Anderson could get a holeshot, he could win one of these things straight-up. (In fact, we literally said that just last week.) Well, in Santa Clara he indeed grabbed the holeshot, but he didn’t win! His holeshot came with an asterisk, because just as he crossed the stripe first he was bumped by Justin Brayton, and that allowed Ryan Dungey and others to sneak inside of him to take the lead. Then Dungey and Ken Roczen set an insane pace that Anderson simply couldn’t match. It’s been a solid second year in 450SX for Anderson, and now it appears he’s curing his starting woes (Santa Clara aside, he was also close to the front in turn one in Toronto and Detroit). Holeshots won’t always equal wins, but we’ll still give him decent odds of getting one if he starts ahead again this weekend. —Weigandt