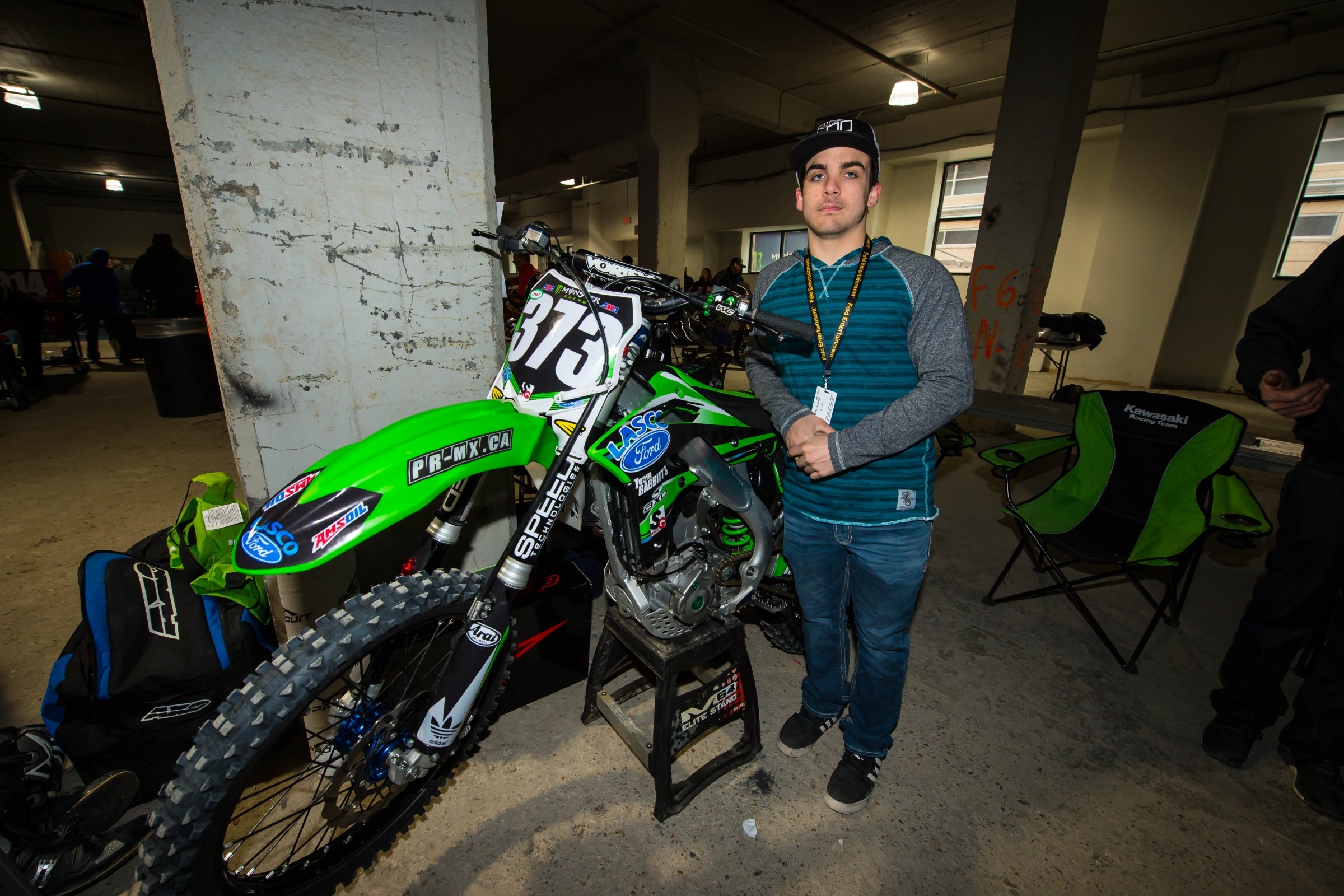 There was a time, back in the 1980s and into the 1990s, that many riders never rode a supercross track prior to making their professional debut. Supercross was still fairly new, and there weren’t many tracks available. Today, that’s not the case. Between training facilities, the Mini Os, Monster Energy Cup and local tracks, there’s ample opportunity to get some time in.

Michigan’s Jacob Williamson is going back in time. Prior to his professional debut in Toronto, Williamson had never ridden a supercross track! Seriously, never! Although well versed in arenacross—graduating from Ricky Carmichael’s Road to Supercross, and even earning an Amsoil Arenacross Lites win in Allentown—the high school senior didn’t have much time to get accustomed to actual supercross. After qualifying an impressive fourteenth in Toronto, Williamson fell short of the main event after problems in his heat. Without any practice time between—save for riding press day—Williamson qualified for the 250SX East Region main event in Detroit, finishing sixteenth in his main event debut.

We spoke to Williamson, who will graduate high school in June, earlier this week about riding supercross, his future and more.

Congrats on making your first main event.
Thank you. I had never ridden a supercross track before Toronto.

That’s what I heard. How does that happen?
I don’t know. I still go to high school and I really don’t have time to go any places.

That really doesn’t happen anymore. Most ride at a facility or something like that.
All I’ve ever done is race arenacross. I’d never hit a supercross triple or turned a lap on a supercross track until Toronto.

What were your first thoughts when you got there?
It’s hard to explain, because I was tired and excited. We were in a big rush in the morning because we forgot a few things, so I think that helped me out a lot.

So, you qualify fourteenth without ever riding a supercross track. Did it take you a few laps to get warmed up? Take me through the process—even the jumps were new to you.
I had never hit a supercross triple before, so I told myself I was going to hit it first lap—I didn’t want to second-guess myself.

Just going for it straight out of the gate?
Yep.

I’m assuming you made it?
Yeah, I did.

So, how did you get into racing supercross and arenacross?
I got into racing from my dad. He used to trail ride and stuff. I started riding when I was four. I didn’t really have any luck in amateurs—I always crashed. I’ve broken twenty-two bones already. That would always happen before Loretta’s. Finally, it started clicking and I was getting better and better. I was also being smarter when I rode. We got into arenacross from this guy named Bob Vaughn from MMCR. My first year was three years ago on a bone stock Yamaha with stock suspension. Last year a dealership helped us out. This year, we really stepped it up and got the suspension dialed in. I think the first round I took fifth or sixth overall and had the fastest lap time in the second main. That really gave me a lot of confidence.

We didn’t even know we were racing supercross [Toronto] until two days prior. The bike was all torn apart—we were switching motors. The bike didn’t even start until the day we left.

I didn’t even ride the suspension. I rode it two laps around this dinky indoor track near my house and then went to supercross.

I know it can be done, but it’s just trying to get it done while going to school and working during the week.

And qualified fourteenth. Obviously you weren’t expecting that.
I was happy with fourteenth, but after … I knew I could have rode better, so I was happy and disappointed because I was so close to the top ten and I wanted to get in the top ten.

And then in Detroit, you make the main event in just your second try on a supercross track.
It was probably the happiest ninth place I’d ever took in my entire life. I got a bad start, and came from like seventeenth in the first turn and I came all the way back to ninth. I was happy with my performance. I didn’t ride too well in practice, but I was able to step it up at night.

How do you celebrate making your first main?
Well, I live like forty-five minutes from there [Detroit] so we drove home and I got to sleep in my own bed. I woke up and had a pretty healthy breakfast and just relaxed on Sunday and got back to the gym on Monday.

We actually hired a cardio trainer because I got really tired about the tenth lap or so in the main event. I think I caught up to like ninth on the eighth lap and I got tired. So, we’re trying to get my cardio up for Indy so we can run strong the whole main event.

This is your second time on a supercross track, what was it like lining up against guys like Jeremy Martin and Malcolm Stewart?
It was cool, my very first ever supercross race [main event] I was lined up next to Jeremy Martin. This year I’ve really tried to just focus on myself and focus on racing the track—and try to limit my mistakes. I really thought I was going to be super nervous, but I wasn’t. I was just focusing on hitting my lines and it ended up working out for me.

So when you went back to school on Monday, did your classmates realize what you did? Do they know you ride?
Not a lot of people know the level I’m riding at, so it’s not like I could go to school and talk to them and be like “I just made my first main event,” because they wouldn’t know what I was talking about. But, one of my friends races, so he knows. I have a few other good friends that go there and ride, so they knew about it.

How do you manage going to school full-time and trying to make a professional career?
It’s kind of weird going racing on the weekends and being a professional motocross rider. But when I come back Monday you’re right back to the normal teenage life—go to school everyday and working during the week.

Is it just you and your dad putting the bike together and driving to races?
Yeah, me, my dad and my mom. I have a friend that goes too and takes me up to the line and stuff.

And what’s your setup like?
I have a really good sponsor, Lasco Ford, and he lets me use his trailer. So we don’t have to worry about hotels or anything. And it looks good—it’s wrapped in Lasco Ford.

What is your future plans in the sport? Are your goals to be a professional and get a factory ride?
You know, that’s everyone’s goal, so we’ll try and make the dream become a reality. We came to supercross this year to get my feet wet. We’re really trying for next year. We’re hoping we can open some eyes and get a decent ride for next year. We’re playing it by year.

This is the path less traveled now. But can you look at someone like RJ Hampshire, who went to high school, and say “Well, he did it, so I can too?”
I know it can be done, but it’s just trying to get it done while going to school and working during the week. So, trying to get riding and my fitness [work] in is tough. I go to the gym two times a day. I wake up at 5:45 and go before school and then I go at 7:30 after.

And you work?
Yeah, I drive cars for Lasco Ford.

How much did you ride coming into Toronto?
I didn't ride for three weeks [prior] and then I went and did two 10-minute motos at an indoor track.

How much the week after—coming into Detroit?
We didn’t ride at all. We did press day and that was it.

You didn’t ride at all!
Nope.

You live pretty close to Detroit, did you have a lot of family in town?
Not so much family, because my grandma and grandpa live in Florida and a lot of my other family members live way up north. But I had a lot of friends from the local tracks there. It has been my dream to race supercross at my local race. Everyone was cheering for me and every time I walked the stands people were congratulating me. It was awesome.

What do you like to do away from the track?
I’m a big outdoorsman. I love to fish and hunt. And I like riding in my free time too.

Well, hopefully you can get some more of that in. Anyone you want to thank?
Lasco Ford, MMCR, Amsoil, AXO, Babbitts, PRMX, Hinson, Mobius, 100%, Slaka Wear, GoPro, Arai, adidas, Speed Graphics, D&D Grips, and Cycra. I also want to thank my agent Brian Siegrist, who works with Cole Seely, Shane McElrath and Cade Clason. He seems to think I have the potential and is helping me a lot.

If you wish to help Jacob out, you can contact Brian Siegrist at brian@disruptiveconceptsllc.com.