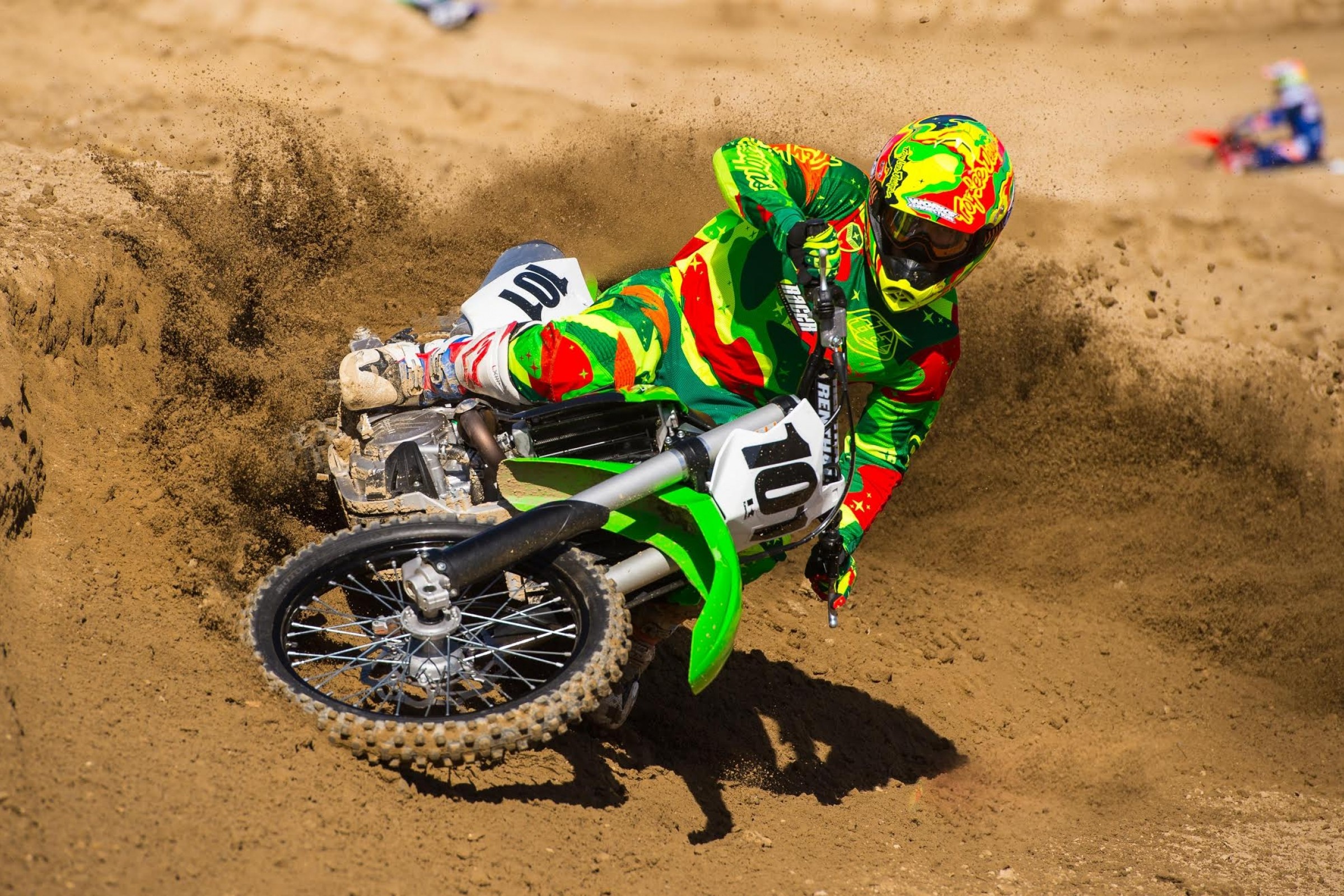 As I sit back and watch what supercross has become I cannot help but notice how annoying it is that every single rider is doing the same sh*t on the track in regards to rhythm sections. I know it's all about rider safety this that and the other but when James was the only guy on a 125 doing the same stuff as the top 250 class guys at the time, that has to be more exciting than what's going on now.  It simply irks me that there is no longer a "jump" or "section" that separates the boys that are still shooting blanks to the real men of supercross.  The options do not even present themselves, rhythm lanes are all the same each week at a different location tossed up in a few different directions. These guys literally walk the track and then go jump through the entire thing first lap!

Secondly. .. With all this Dungey dominance talk, I am nowhere near convinced anybody (Dungey in particular) could beat RV2 on a regular basis if he was in the series.  I know you hate "what if's" so I am directing this thought to Baker’s program.  Because if RV2 was still racing, it's highly unlikely that Dungey would be training at the Baker factory and the majority of Dungey’s recent success has come since he signed with Aldon. Are the things going on over at the Baker factory that good?!

- The guy convinced RV2 would have had 5 straight supercross championships!

I’m okay with modern tracks not having crazy jump options that tempt riders to send it from one end of the stadium to the other because the bikes they are riding these days would make that possible. What I don’t understand is why they are making whoop sections so easy. Even last weekend in Canada the whoops were pretty legit in practice and then for the night show they mowed them down to nothing; guys were jumping through them in the main! Whatever. The tracks are what they are.

You’re right… I do hate “what if’s.” So it shouldn’t be a total shock when I tell you that you are an idiot for thinking that RV would have won five titles. Ryan Villopoto ISN’T racing so your theory is irrelevant. I love RV but he didn’t stay because he didn’t want to race anymore. This sport regularly produces one rider who gets a mental edge and runs the table. That guy is Dungey right now and he doesn’t look like he’s ready to give it up soon. When you consider that Dungey, Musquin and Anderson are all training at Aldon’s place, and given his record of winning titles, it’s safe to say his program works.

"He has came from behind and done exceptional". "I seen him riding at the track". "He's riding excellent". "He's been racing outstanding". These are just a few quotes from the professionals on Fox Supercross coverage. Don't they have any classes for racers turned broadcasters?

No, they don’t. And even though these quotes look like excerpts from a toothless redneck’s view of the races, it isn’t something that’s exclusive to our sport. Charles Barkley sounds like he has a mouthful of pudding when he talks and he would give RC and Fro a run for their money in terms of double-negatives and other grammatical inaccuracies. Shannon Sharpe sounded like a bumbling moron during his stint as a broadcaster; Emmitt Smith was terrible and even the great Jerry Rice fumbled big time on the mic. Conversely, John Madden and Frank Gifford have proven that you can make a successful transition but I’m guessing they worked at it and made a concerted effort to speak on camera like a professional. Perhaps some of our broadcast team would benefit from some online English classes?

Something occurred to me last year concerning Jeremy Martin as he prepared for the start of a race, an outdoor national if I recall correctly. He had on his helmet and gear and then proceeded to lick the palms of his gloves prior to the start. I don't remember how long before the gate dropped, but it just seemed a little odd to me. Perhaps to get some grip to the palms of his gloves? I don't think that the material in the gloves had some kind of personal favorite taste. Care to shed some light on the subject since he is again lining up on the gate for the east coast rounds....maybe he was just a window licker on the school bus? Who knows ?

Thanks, I know that you've got this one licked.
George Sosnick

I saw this email weeks ago and passed it by because I hadn’t seen this tick from our reigning national champion. I thought maybe you had just seen him scratch his face or something and misinterpreted it. Then I saw Jeremy slide his hands, one at a time, under the front of his helmet on the line last weekend and lick the palms of his gloves. I pointed at the TV and then started laughing because I remembered this email. Anyway, I don’t have any idea why he does it. I’m guessing he thinks that moistening the glove will make it stick to the grip better. I would think it would dry your mouth out, not something you want before you start the race. Either way I’ll be looking for it at every round now as pre-race entertainment. This is even better than Pourcel getting a bottle of water dumped on himself before the start of a national moto. The racing is great but I watch moto for the pre-race antics on the start line.