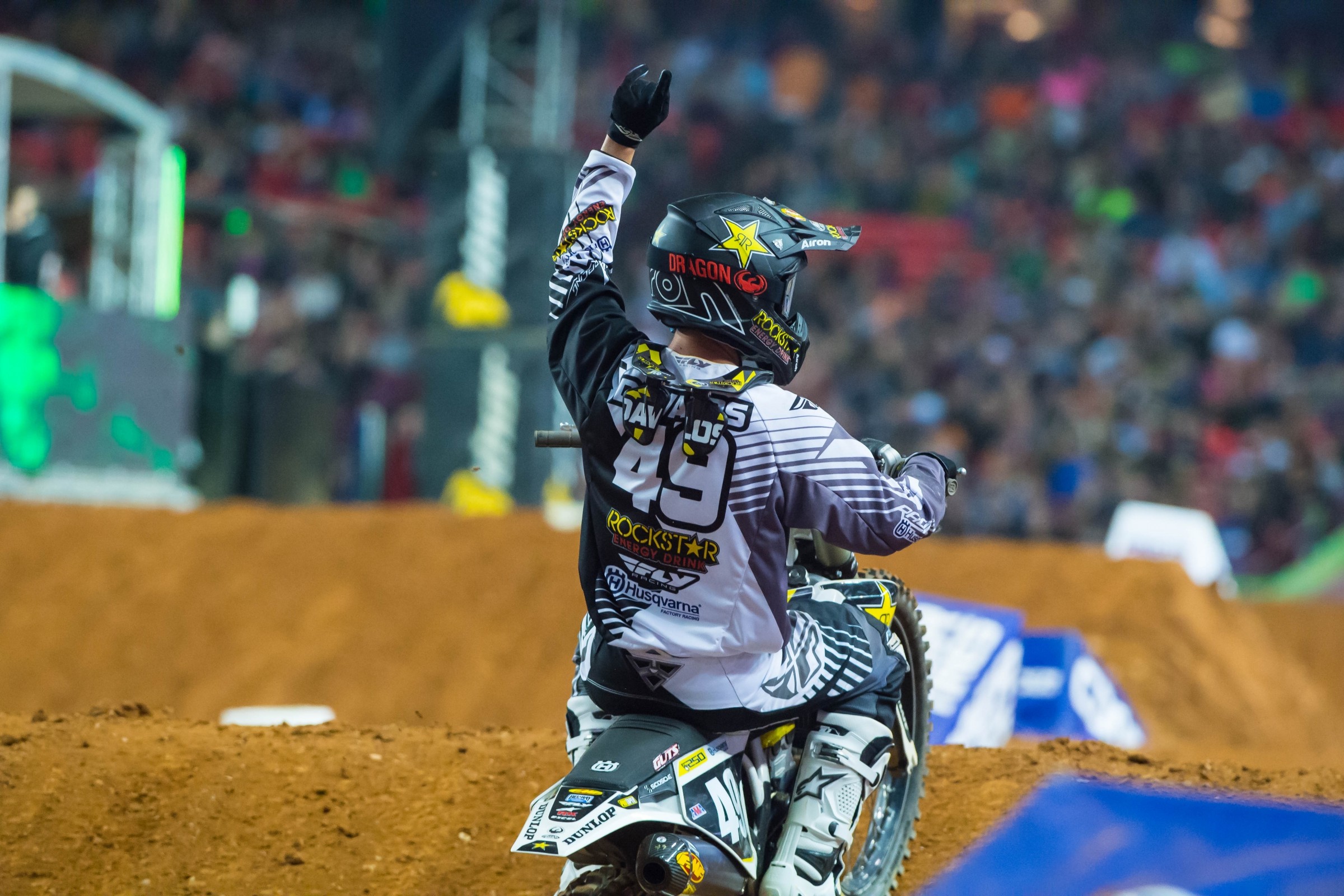 Things certainly have gotten a little crazy since Monster Energy Supercross headed east, and although Ryan Dungey still holds a 34-point lead over Ken Roczen, the racing itself has become much less predictable. In fact, we’ve had three different winners—Dungey, Eli Tomac, and Roczen—in the last three weeks! And let’s not forget one of those wins was almost claimed by Marvin Musquin, who took second last week in Toronto. And if guys like Jason Anderson, Trey Canard and Cole Seely start well, they could get in there as well. So who’s got Detroit? We have no idea, and we like it that way! –Aaron Hansel

After winning his heat race in Toronto, Malcolm Stewart said in a TV interview he needed to win the main because he needed to make some money. But after being involved in a big first-turn pileup he needs to make up some points as well! The good news is he rode great, coming from near dead last (and stopping in the mechanic’s area twice) to sixth, limiting the damage in what could have been a truly disastrous night. He now trails Jeremy Martin by ten points, but if he wins in Detroit he’ll regain some ground and earn some serious cash. –Hansel

There’s been a fair amount of chatter about Jeremy Martin and his supposed lack of supercross skills, and while he has struggled on occasion in the past, it’s probably time to put that talk to rest. If Martin was just an average guy indoors there’s no way he could have ripped up to second place after crashing in the first turn and finishing the first lap in nineteenth. The superb ride gave him the points lead, too. We’ll see if he pads it even more in Detroit. –Hansel

That’s the deficit former points leader Martin Davalos faces after missing Toronto. Rumor has it he missed the race due to visa issues, while his team maintains he was tending to personal business with his family. Either way the damage is done and what matters now is how Davalos reacts. There’s very little, if any, room for error, and if he still wants a shot at this championship Davalos needs to put together a string of wins, starting in Detroit. –Hansel

You’ve probably heard of Alex Frye, but you probably don’t know much about him. And we’re almost certain you didn’t have him pegged for a fourth place in Toronto. Not that he’s not great—chumps don’t get Troy Lee Designs Red Bull KTM rides—but he’s a supercross rookie and there’s no shortage of established talent in this class. Let’s see how he follows up that great ride up north, this weekend in Motor City. -Hansel

Weston Peick’s second season has been a struggle, as he’s dealt with injuries probably a little more debilitating than he’s letting on (he’s had forearm issues since a crash in Oakland). He’s had just two top tens this year (he had ten last year) with his second coming last weekend. It’s a step in the right direction for he and the team, which has been without Justin Barcia for much of the season. For Peick, whose contract is up at the end of the season, these last few races are critical. After averaging a 9.6 finish last year (5.9 if you take out his three DNF’s), Peick’s average finish is 13 this year. Was last weekend the turning point? - Stallo

Despite tense ongoing contract negotiations over wearing a Pulpmx.com helmet sticker, Jake Weimer locked down his first top ten since Arlington last weekend. Although happy with the result, Weimer pointed to a deficiency that, as we’ve seen, is playing a big difference in results: “My starts were bad, though, which made the racing part difficult,” he said. Weimer’s lap times were solid a week ago, hovering around the 56 mark (and setting the tenth fastest lap overall), but his opening lap was one of his worst of the night—a 58.191. Let’s see if Jake can get out of the box quicker this weekend. –Stallo

Josh Grant is returning to Kawasaki, the brand he rode all of 2015 with. Grant is filling-in for the injured Wil Hahn at Monster Energy Kawasaki and as you may recall, he rode for the team in Lucas Oil Pro Motocross last year after TwoTwo Motorsports folded (and Hahn got hurt over the summer). Unable to secure a ride for the 2016 season, Grant put together his own deal to race Daytona on a Suzuki. He’s been testing with the team recently and told our Eric Johnson that the change shouldn’t be a huge problem. “I’m a guy that adjusts very easily to riding different bikes, so I was always comfortable on the Kawasaki. Especially with the new changes they made with the frame and stuff.” How will Grant fare in his first ride with the team in 2016? – Stallo

Chad Reed is expected to race this weekend after leaving the 450SX main event last weekend in Toronto following a crash off the start. Earlier this week, Reed said he was “banged up” from the crash, but otherwise doing okay. Reed struggled on the one-line Daytona track, but was third a week prior in Atlanta. Will he secure a fourth podium of the season this weekend? – Stallo