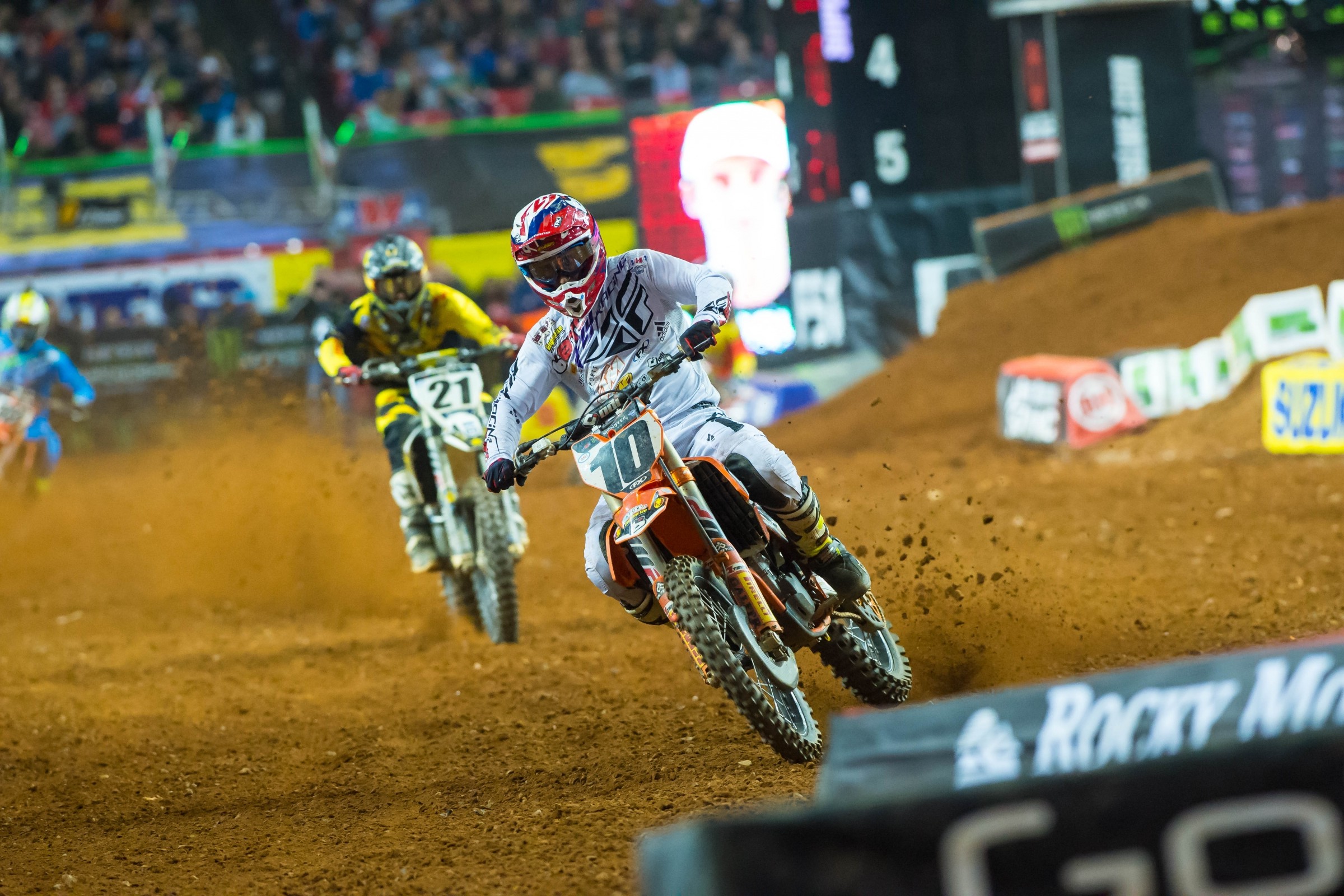 The infield at Daytona Motor Speedway, where this weekend’s gates will drop, has a whole lot more room than the rest of the venues of Monster Energy Supercross, which allows for a longer track. How much longer? Roughly fifteen to twenty seconds per lap, which translates into a main event about five to six minutes longer than normal (four to five minutes for the 250s). That might not seem like a lot, but when you factor in Daytona’s taxing track, the roughest and choppiest of the year, fitness becomes even more important. It could be just what Eli Tomac needs to get back on top. Ryan Dungey will be battling up front at some point too, no matter where he starts. –Aaron Hansel

Before Atlanta we wrote in this column that Marvin Musquin could very well get back on the podium if he got a good start. Well, he got off the gate well and did more than just get back on the box last week—he led nineteen laps, set the fastest time, and nearly won the thing! Unfortunately for Musquin, the only lap he didn’t lead was the most important one, and his career-best second place caused heartbreak instead of jubilation. But don’t expect Musquin to wallow around in self-pity all week—he wants that elusive win now more than ever. We’ll see if he gets it in Daytona. –Hansel

Cole Seely wasn’t too happy with Jason Anderson after Seely ended up on the ground twice at the hands of Anderson. Seely, who up until Atlanta had classified all previous run-ins as “just racing,” finally got fed up, even going so far as to tell us he wanted to “retaliate the rest of the season.” Those words were spoken shortly after the race, and Seely, who is normally pretty even-keeled, probably isn’t as heated now as he was then. Of course, past grievances have a way of firing up quickly when adrenaline is high—just ask Weston Peick. Don’t expect Seely to go out of his way to even the score this weekend, but if the two find themselves racing together in Daytona, sparks could fly. –Hansel

The East Region is stacked this year, and even after Atlanta we still don’t really have any idea of what to expect race to race. That said, if you’re looking to lay down some cash on who will win in Daytona, Jeremy Martin would be a good bet. He’s going to win at some point this year, and with Daytona’s physically demanding motocross-like layout, it’s hard to think the two-time 250 Lucas Oil Pro Motocross National Champion won’t be a factor up front. As long he doesn’t get a horrible start, he’ll be up front chasing his first Daytona victory. –Hansel

Martin Davalos has been in the 250 Class since 2006 and was considered a contender for many of those years. Things never quite came together for Davalos though, but if he races the rest of the season like he did in Atlanta, this could finally be his year. He’s got the speed, he’s got the equipment, and he’s definitely got the experience. A title would also promote him to the 450 Class. We’ll see if he takes one step closer to big bikes in Daytona. -Hansel

You thought Nick Wey retired? Ha! Nick Wey will never retire—despite announcing his retirement earlier this year. Seriously, though, he’s back this weekend making his 2016 debut with Team Tedder/Monster Energy Kawasaki. All along, Wey told us he was training and preparing to race, he just couldn’t get the right team and sponsorship package together for his own Moto Mafia effort. With Team Tedder, he seems to have what he wants. “Racing motorcycles is something that I love, which is why I never ruled out racing altogether,” said Wey. How will the vet do in his first race of the year? – Chase Stallo

The Return of Josh Grant

When we last saw Josh Grant, winner of the 2009 Monster Energy Supercross season opener, he was riding off into the sunset after a second moto win at the MXGP of USA at Glen Helen. (He finished second overall behind MXGP champion Romain Febvre.) Unable secure a ride this off-season, and after being passed up for the fill-in role at RCH that went to Jake Weimer, Grant has been MIA this supercross season. Behind HLTN CO, a clothing company Grant has a role in, and other sponsors, JG will make his season debut this weekend. Grant’s been riding with his former boss, Chad Reed, down in Florida this week, which should prepare him for a rough Daytona track. - Stallo

Lost in people were losing their minds over the separate incidents between Marvin Musquin and James Stewart and Cole Seely and Jason Anderson, were the performances of Davi Millsaps and Justin Brayton. Millsaps, currently dealing with a thumb injury and an illness last weekend, rode to his best finish since a third in Las Vegas in 2013. “I felt good on the bike, I just didn’t feel good. I couldn’t breathe. I was trying to take deep breaths, just can’t,” he told us last weekend. Meanwhile, Brayton rode to his first top-five finish since a fourth in Toronto in 2014. With fellow teammate Andrew Short on the mend, the team could use strong performances from Millsaps and Brayton this weekend. - Stallo

Streaks on the Line

Five wins on the season, a thirty-three point lead in the standings, and a finish no worse than second all season, one would think Ryan Dungey doesn’t have much on the line this weekend. Ah, but he does. Dungey is riding a pair of impressive streaks that could reach record book status. With a podium this weekend, he will tie Chad Reed’s all-time consecutive supercross podium streak with twenty-five. Dungey is also looking for his twentieth straight first or second place finish. So, yeah, a few things to look forward to. – Stallo

They are each coming off their worst finishes of the season at the most inopportune time. Yes, Tomac was already pretty much out of the championship prior to Atlanta, but an eleventh place finish is certainly very un-Eli-like. Same with Roczen—albeit he’s still in title chase—as he limped to a sixth after another bad start. Roczen had the momentum after two wins in three rounds and left Dallas saying he was going to turn things around —he needs to do it again if he has any hope of contending for a championship. For Eli? He just needs a good finish to maybe spark a good run to end the year. - Stallo