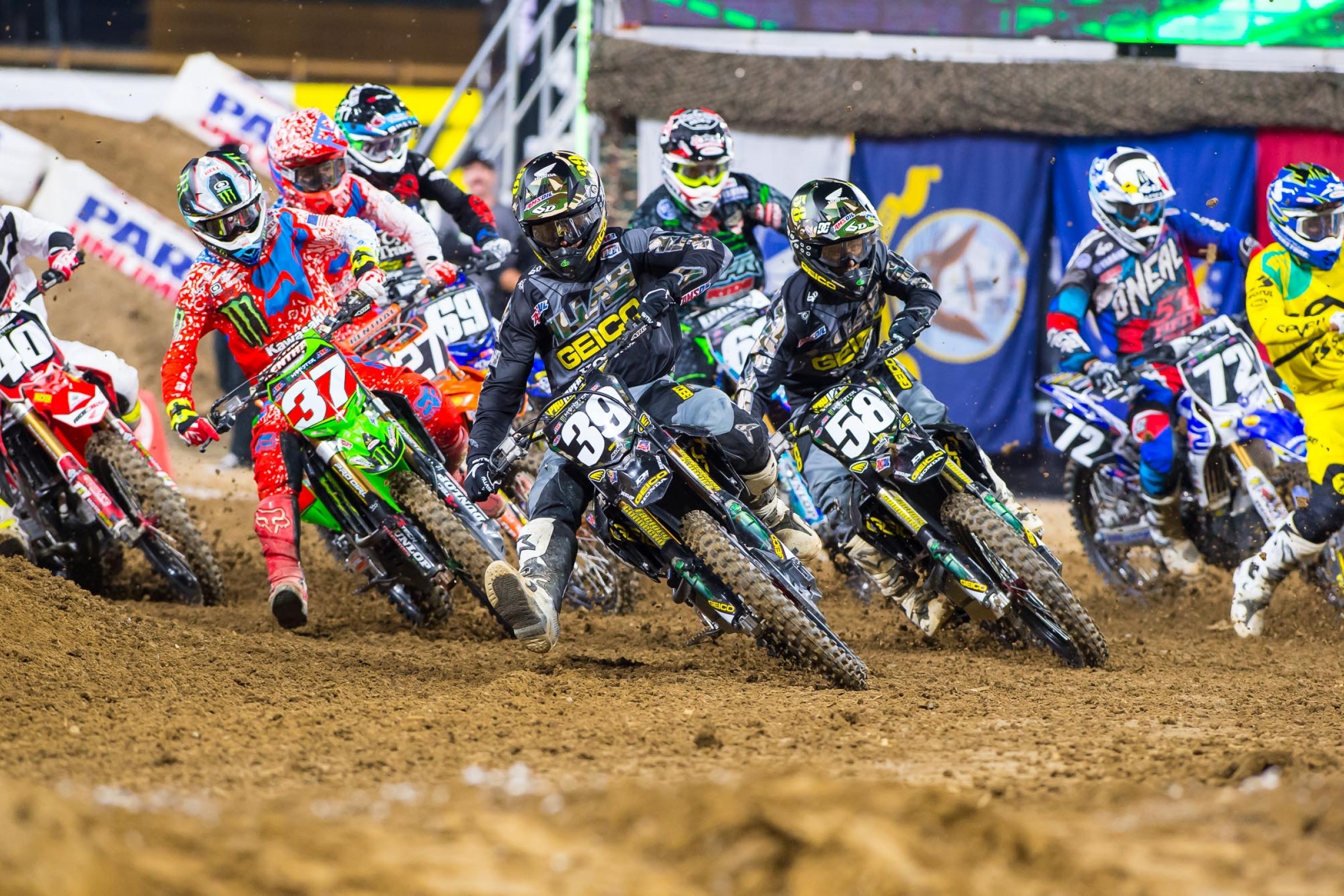 Round 6 of Monster Energy Supercross returned to Petco Park in San Diego, California with a better crowd than the first round and a nice track. The track was jump-filled and pretty long with a sand section and a right hand turn. The 250SX West Region provided a good night of racing while 450SX featured little passing, but a tight race for the third and final podium spot.

But first, it was Red Bull KTM’s Ryan Dungey grabbing the holeshot and taking off for his fourth win out of six on the season—leading every lap at that. The track got pretty slick as the laps went by and Dungey was flawless, with HRC Honda’s Cole Seely never too far behind.

"I just tried to keep the pressure low the entire main event; keeping good traction with the rear tire was key," said Dungey. "I got a good start, which was huge in putting me in a position to win and I just tried to be consistent for all 20 laps. We had to overcome a few things today, but that's racing. I'm happy to be back on top of the podium."

In the 250’s it was Monster Energy/Pro Circuit Kawasaki’s Joey Savatgy taking his second win of the season in impressive fashion after withstanding pressure from Yamalube/Star Racing Yamaha’s Cooper Webb for four laps until Webb washed his front end out. Savatgy took the lead from his teammate Chris Alldredge after two laps when the #35 green machine came to a screeching halt.

Savatgy and Webb came into the race tied in points and with his win Joey has a three-point lead on Webb with one more race before a long break.

In the 450 Class it was Dungey with the lead early on over Seely but the battle for third was hot and heavy between HRC Honda’s Trey Canard, Roczen, Monster Energy Kawasaki’s Eli Tomac and then later on, Rockstar Energy Husqvarna’s Jason Anderson. All the riders swapped positions throughout the main event with Roczen eventually getting by Canard and holding on for third. It was an intense battle between all the riders and was probably the highlight of the race.

Jason Anderson’s starts are killing him. He once again was forced to come from the back and was about the only rider to make passes as he forced his way by Tomac and then Canard to finish fourth. If the Husqvarna rider can get some better starts, he can get another win.

BTOSports-KTM-WPS’ Davi Millsaps won another heat, his third of the year, but two crashes held him back on the night to an eleventh. Still, it’s good to see the #18 do some damage out there and he looks fast on the KTM.

Monster Energy/360fly/Yamaha’s Chad Reed had a quiet night as he never seemed to get it into gear in either the heat or the semi and followed Red Bull KTM’s Marvin Musquin around for most of the main event, eventually finishing eighth.

Four riders made their return to the 450 Class and there were some good with Canard, but also some bad with Yoshimura Suzuki’s Blake Baggett failing to qualify for the main after a first turn crash in the LCQ. Also back was BTOSports.com-KTM-WPS’ Andrew Short who suffered a hard fall in the first turn of the heat and was riding in pain most of the night. GEICO Honda’s Justin Bogle was back won another semi race and followed Short around in the main event. Short finished fourteenth with Bogle one spot behind in fifteenth.

Back in the 250 Class, it was GEICO Honda’s Christian Craig rounding out the podium as Webb made a hard charge late in the race to retake second.

CycleTrader/Rock River Yamaha’s Colt Nichols once again proved to be a surprise out there as he ripped through the pack to get a fourth. The Okie has certainly been impressive in his second pro season.

Fastest in both practices was Rockstar Energy Husqvarna’s Zach Osborne and he looked to be ready to win his first career main event but he didn’t get the start he needed to and then battled Nichols in the main, eventually finishing fifth.

GEICO Honda’s Jordon Smith crashed out when he tangled with Webb in the main event and landed on his already sore shoulder. His teammate Jimmy Decotis appeared to be much better today than he’s been in recent weeks and was third at one before dropping back a ways and finishing seventh.