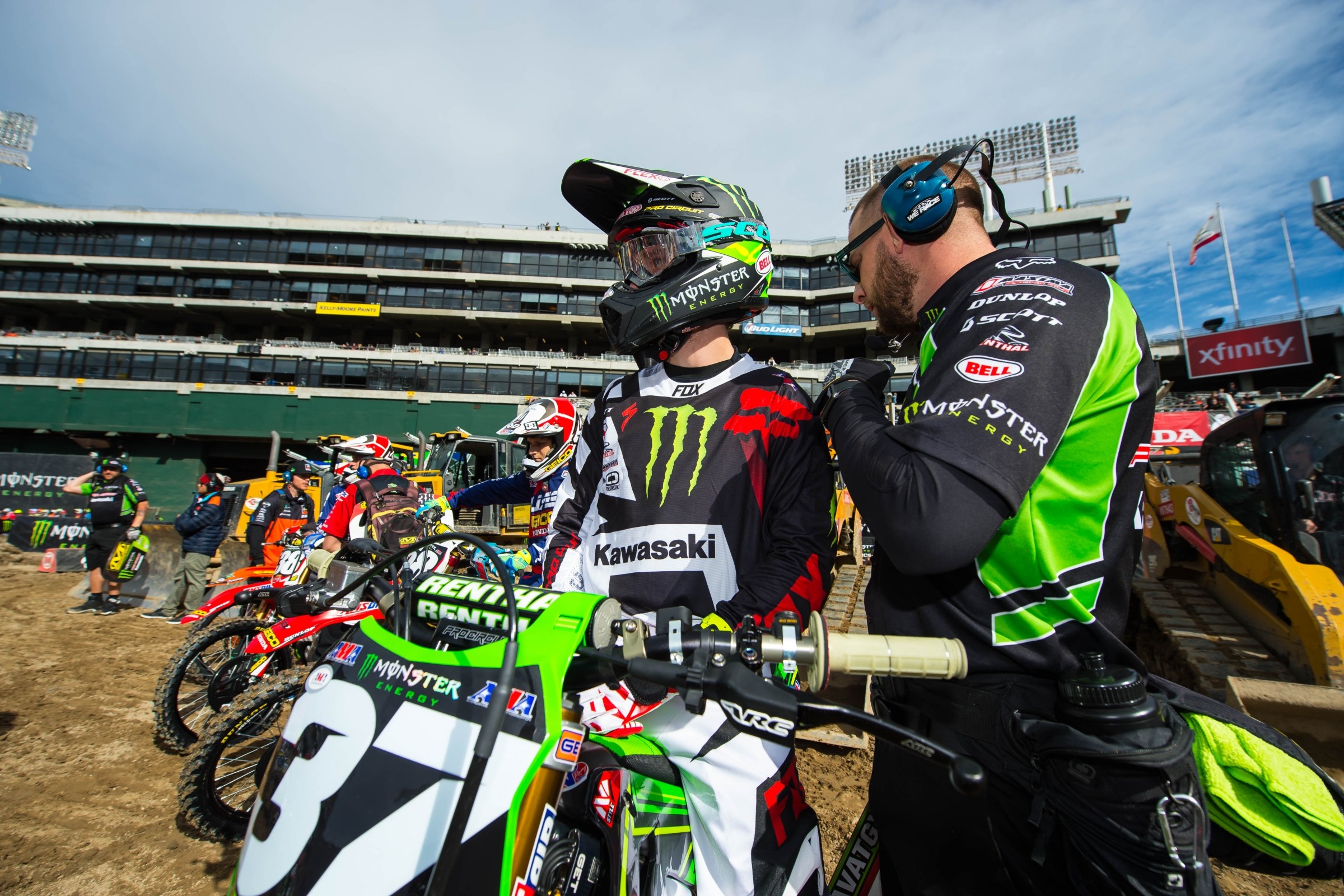 By Chase Stallo and Kyle Scott

Twenty consecutive podiums, three straight wins, 55 of the last 60 laps led and a finish no worse than fourth since a sixth in East Rutherford in 2014. Yeah, you could say Ryan Dungey is doing okay. Already nearly a full race clear of second place through just four rounds, the championship could get very boring, very quickly. Will Dungey’s podium streak stop just shy of Chad Reed’s all-time record, or will he inch closer this weekend? –Chase Stallo

Cooper Webb could have thrown his bike down, kicked and stomped off the stadium floor last weekend in Oakland and no one would have batted an eye. Instead, he composed himself, got the bike running, rode another lap (albeit to finish twenty-first) and gave a mature interview with FS1 reporter Jenny Taft. He later went on Instagram, not to curse his team or bike or bad luck, but saying, in part, “Unfortunately had a mechanical issue that put me out of the race. Would've been nice to get the 4th win of the season but that's the love/hate relationship with racing.” Through some big battles this season, Webb has shown poise well beyond his years. Will it translate to Glendale, where he looks to retake the points lead? – Stallo

Speaking of the 250SX points lead, it now belongs to Monster Energy/Pro Circuit Kawasaki’s Joey Savatgy, who leads Webb by two entering Round 5 (of 9). Savatgy had fallen off the championship radar after an eighth at the opener, and with Webb winning everything in sight. Call it luck, call it fate, no matter, Savatgy holds the red plate for the first time in his career. “It’s something that I’ve wanted my whole life. It’s going to be something that I’m going to fight every day for. Next weekend it’s not going to come easy,” he told us after Oakland. With his first career supercross win now under his belt, how will Savatgy respond with the points lead? - Stallo

Sure, talk is surrounding Cooper Webb and Joey Savatgy for the 250SX West Region title, and rightfully so, as they sit 1-2 in points. But, veteran Zach Osborne trails Savatgy by just five points, while the underrated Colt Nichols is just thirteen back. Christian Craig is currently sixteen back, but has shown the speed to disrupt the proceedings. Will someone not named Webb or Savatgy make a move this weekend? – Stallo

Since an opening round, come-from-behind win, Jason Anderson has failed to reach the podium (he was docked two spots after finishing third at San Diego for jumping on a red cross flag). The problem for Anderson has centered around the beginning of the race. He was twelfth after lap 1 at A2 and eleventh in Oakland. Against a strong field, it’s asking too much to recover from that sort of hole. We’ll see if Anderson can find some early race magic this weekend. - Stallo

This will be the first supercross race at the home of the Arizona Cardinals in Glendale, AZ, so history is going to be made no matter who wins it. But one rider who could really use the boost is Eli Tomac, who actually got his first 450 supercross win ever at the older Chase Field in downtown Phoenix last year. We haven’t quite seen the same Eli as we saw last year, yet, and his progress at Anaheim 2 seemed to take a step back at Oakland. As he recovers from his off-season shoulder woes and his new Kawasaki, you have to figure he’ll find the right combination at some point. Will he get a huge rebound in the desert like he did in 2015? – Kyle Scott

Keep it up (right)

Christian Craig has found himself on the ground three out of four main events in the 250 class this year. These small mistakes have cost him positions and points. We’ve seen him show tons of speed, battle with Cooper Webb, get a heat race win, a holeshot, and get on the podium, twice. If he can keep it upright, he should be able to keep improving. Can he advance all the way to the victory? –Scott

January was a bit brutal on the field as far as injuries are concerned. Just mentioning some big-name 450 riders, the following have spent more time on the sideline than on the track: James Stewart, Andrew Short, Kyle Chisholm, Broc Tickle, Justin Barcia, Justin Bogle, Dean Wilson, Trey Canard, and Blake Baggett. We’ll have to wait to watch these guys and more get back in action. Thirteen riders have made the 450 main events every weekend so far this year. With all these factory riders on the sideline, the gate positions are starting to open up in the mains for some privateers. –Scott

Christophe Pourcel has shown us he has the speed in practice, but we haven’t seen him excel in the full 20, yet. His best qualifying practice was second, whereas his best finish this year was a twelfth (at A2). He is currently sitting thirteenth in points. Pourcel has the ability to turn it up or turn it off at any moment (think last week in the LCQ). Let’s see if he can light that fire in the main and crack the top ten this weekend. –Scott

In the first three rounds the same six riders took the top six spots in the 450 class. After four rounds, six different riders have made the podium. Six different brands are in the top six in 450SX points. Less than six points separate the top three in the 250 class. About the only thing not a six at supercross right now are the Monster Girls! Last weekend Marvin Musquin finally broke up the big-six party by finishing third. Is someone else ready to join the fray? –Scott