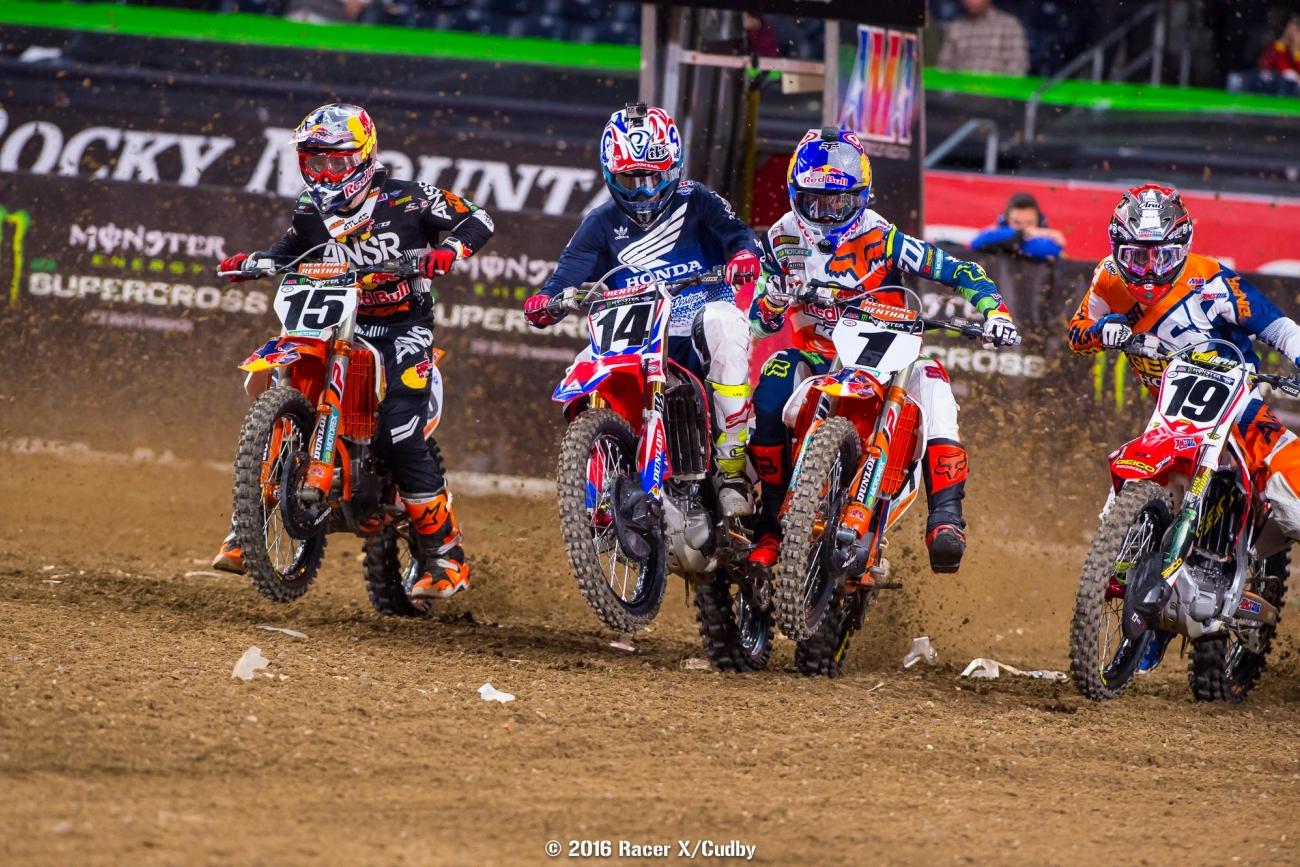 The 450 class is stacked and deep and anything can happen, but Ryan Dungey somehow made a win look routine against the majority of those contenders. Chad Reed was the only man to give him a challenge, but Dungey was robotic like the Terminator, never wavering much under pressure, and showing no mercy until he and his Red Bull KTM had conquered all.

“Having Chad [Reed] on my heels the whole time elevated the pressure a little bit to not make any mistakes, but overall everything felt good,” Dungey told us shortly after his champagne war with Reed.

Dungey also told us he thought he had a little more in the tank if Reed tried to press the issue, but didn’t want to push harder unless he absolutely had to. “I think we all had more left in us, but you would have to find the roll speed rather than intensity because the harder you attacked this track the more you would spin and you’d be prone to make a mistake—you’re overriding it at that point. I felt him there but I just tried to keep things clean and tight. I think we all had a little more in us, but it was just such a fine line.” Dungey leaves San Diego with the red plate, something he didn’t give up the whole season when he left with it for the first time last year in Oakland.

Dungey’s starts were better than last week and he looked smooth and precise throughout the day, perfectly nailing backsides on some of the difficult rhythm lanes, railing the whoops, just basically looking like a machine. In fact, despite how stacked the field is, Dungey’s robotic performance was downright scary, because it somehow made the night a little boring. Everyone in this field is good right now, but Dungey rode great.

Reed did his best to keep it interesting, following Dungey through in both their heat and the main event, and keeping pace for all twenty laps. Reed was there, about two seconds back most of the way, and Dungey even made a few small mistakes that let Chad get even closer, at one point getting it down to about a second. “I spent 26 laps tonight right behind the champ,” said the Monster Energy/Chaparral/360Fly Yamaha rider, who ultimately came up 1.4 seconds short of Dungey. Last week Chad didn’t touch his bike at all (his mechanic Mike Gosselaar told us they didn’t even change one clicker on the suspension the entire day and night at Anaheim) but this week they did some work, including a ton of starts with his buddy Michael Byrne. Chad felt he left something on the table last week, and this time he was clearly a lot better. He didn’t get the win, but it was another podium for the all-time King of the box, and it appears he’s a title contender again in his 14th season in the class.

Ken Roczen looked ready to contend as well, getting his Soaring Eagle/Jimmy John’s RCH Suzuki up to third early right behind Dungey and Reed. Then came a rare mistake as Kenny bounced off the track and crashed over the side of a berm. Since it was early in the race the error cost him quite a few positions, and he returned in about tenth. He would claw back to sixth. Kenny has been fast so far this year but just hasn’t caught the breaks yet. “I felt great, I feel like I’m riding fast and I feel super strong. I went off the track and had to come from the back again and could only finish sixth, but I think for us it’s just about putting a few things together. Everything is there. Actually I’d rather start slow and pick it up from here on out. Obviously I’m bummed because this tiny little mistake cost me because I was up front in a great position and thought I could possibly get the win, but we’re going to keep focusing, we’re doing everything we can and doing everything right and we’ll see where it takes us next weekend.”

Cole Seely, meanwhile, has been making the most of his mains. The Honda HRC rider was third for the second week in a row, saving his best riding for the main event again. To get third, though, he had to survive a tremendous, and even a bit physical, battle with Jason Anderson. Anderson actually got Seely for third, but multiple sources have told us Anderson will be docked two spots for jumping when a red cross flag was out, despite an appeal from the Rockstar Energy Husqvarna Factory Racing team. “It was a heated battle,” Seely told us. “It was ignited by him jumping on a red cross flag, and I hate to be handed a position because of that, but it is what it is. But if it wouldn’t have been for that and him gaining those extra seconds on me, I don’t know. Those were precious seconds I needed, I needed to have that cushion to be able to charge forward, and once I felt he was on me I couldn’t keep moving forward. He hit me pretty good, and that last one was harder than the others. But it’s racing, and it’ll probably happen to him at some point too. I’m not saying that in a threatening way, it’s just such a stacked and talented field that that stuff just happens.”

With Anderson docked back to fifth, Monster Energy Kawasaki’s Eli Tomac gets a bump up to fourth. Just another quiet, risk-free ride from Tomac, exactly what you’d want coming back from injury.

Trey Canard was seventh for the second-straight week, but his race was much different. Last week Canard took the fastest qualifying spot and a heat race win and looked to be a main-event contender. He didn’t have the same flash in San Diego, hovering around tenth in practice, having to go to the Semi to make the main, and never quite getting in the battle up front after a mediocre start in the main. We’ll see which Canard we get for round three in Anaheim next weekend.

Once of the best rides of the night came from Monster Energy/Team Tedder’s Jake Weimer, who was eighth and ripping, staying close to Canard down the stretch. We talked to Jake after the race and he told us he just wanted to get through Anaheim, his first race in ten months after a huge injury last year, and then start getting on it beginning in San Diego. Jake says he feels like he’s in a better place mentally in his approach to racing this year.

Good ride for Marvin Musquin, ninth on his Red Bull KTM. Justin Brayton rode well, and actually had the early lead on his BTOSports.com KTM after nailing the start, but slipped back to tenth. There’s no room for error against this field early in the season.

Yamalube/Star Racing Yamaha’s Cooper Webb won the 250 class again, but it was not easy. He gated poorly again in both his heat and the main event, and even had some tangle ups cost him the heat win. In the main he was eighth on the first lap and worked his way forward, but leader Zach Osborne fought tooth and nail to hold the top spot. Webb finally inched up in Osborne and made the pass, but Zach fought back and sliced inside in the next corner. The inside blew Osborne’s momentum heading into the whoops, and Webb quickly had him back. Osborne tried pushing harder to keep up and ended up crashing back to sixth.

Second went to Joey Savatgy on his Monster Energy/Pro Circuit Kawasaki. It was a much better performance than last week where he got tangled up in the middle of the pack. However, Webb was able to pass him and get away for the win. All of these riders are in for a challenge this year with Webb around.

GEICO Honda’s Jordon Smith is trying to ditch the crashing rep this year. He went down in Anaheim while running in a podium position, but this time he was perfect, keeping the rubber side down and delivering his first career 250SX podium. He’s also second in 250SX points after last week’s fourth.

How about CycleTrader.com Rock River Yamaha's Colt Nichols? He's under the radar right now, but if he keeps putting in rides like he did in San Diego it won't be long before people start taking notice. Nichols led laps in his heat and held on for a strong second behind Zach Osborne, and came through a couple guys in the main to log an extremely solid fifth place. Fantasy alert, this guy's a sleeper!