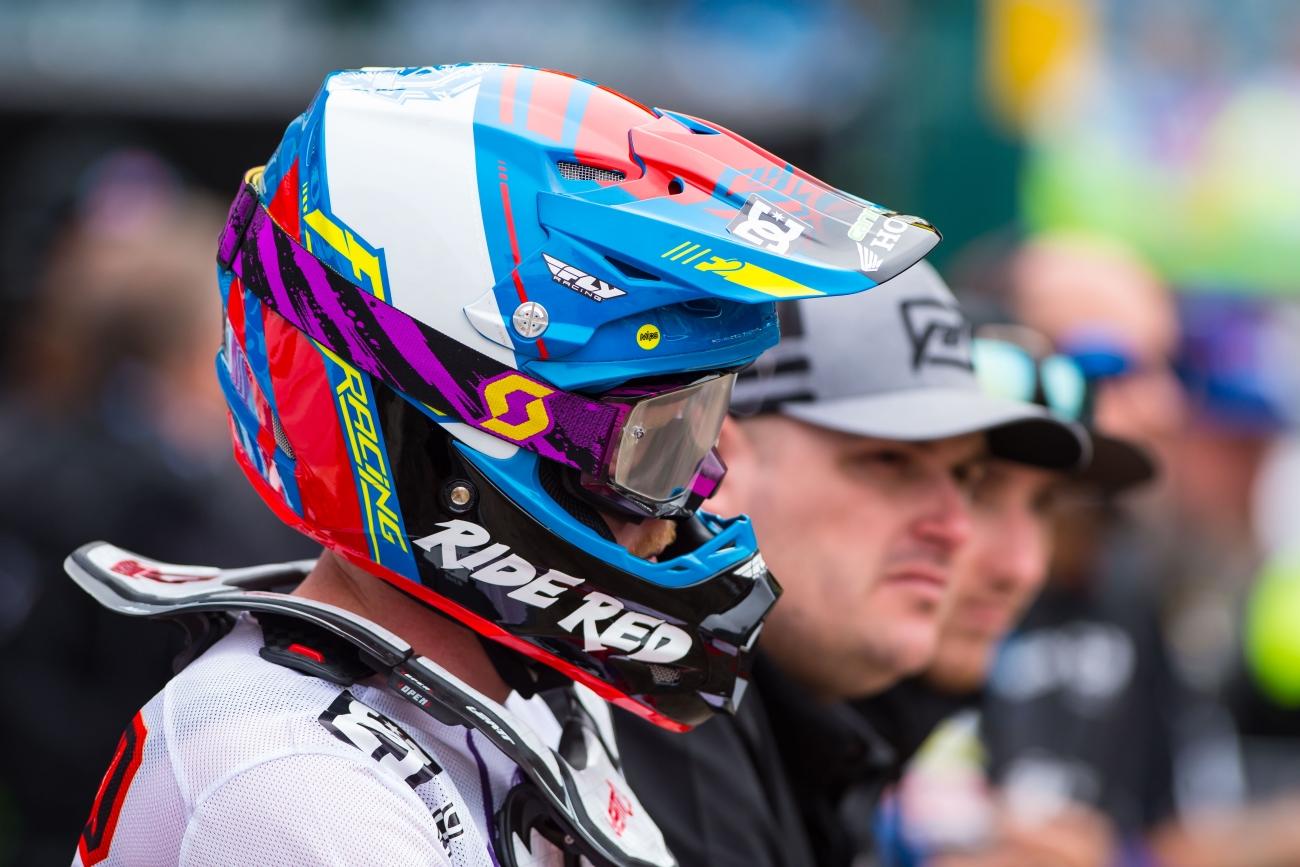 American Honda is entering its second season with full assistance from Honda Racing Corporation (HRC), and a lot of the bigwigs from Japan attended the opener, including HRC vice president Shuhei Nakamoto. This off-season, Trey Canard and number of American Honda employees traveled to Japan for the All-Japan National and spent time with HRC employees. We detailed the trip in the February 2016 issue of Racer X Illustrated in the feature “Factory Land”. Everyone we talked to said it was a fantastic team bonding experience for the two sides, and that looks to have continued into Anaheim.

“It meant a lot to Team Honda HRC to have so many important guests at Anaheim 1,” said Sam Mishima, motorcycle sports manager. “The support this team receives from Japan is invaluable to our race effort, and it was a pleasure for us to have them here to see the sport and this project firsthand.”

Cole Seely certainly didn’t pay attention to the sophomore slump stats we mentioned in our preview show, as he led thirteen laps at the opener before losing the lead to his old 250SX title rival, Jason Anderson. It was a solid third and after the race Cole seemed very pleased with that result. Cole was only thirteenth fastest in qualifying (although he’s almost always a better racer than qualifier) and was so-so in his heat race, and off the start in the main event. When the race was restarted, though, he was the benefactor and found himself with a holeshot and the lead. On what could have been an average night, he delivered a podium.

Trey Canard was certainly fast enough to podium—was the fastest qualifier and won a heat race—but a mistake on lap 13 in the main event pushed him back to seventh. “I just didn’t ride well; I was tight, picked poor lines and didn’t fix my mistakes,” he said in a team statement. “Then I jumped too long on a section, landed in a hole, missed the brake and went off the track. It was a bummer, but I’m glad I got the points for seventh. That’s better than nothing, and I’m walking away healthy so overall that’s an okay night. It’s a long series, so hopefully we can improve and keep moving forward.”

It was an up and down return to Monster Energy Supercross for Rockstar Energy Husqvarna’s Christophe Pourcel. After setting the quickest time in the second 450A session (good enough for second overall behind Canard), Pourcel struggled to an eighteenth place finish in the main. "First supercross race back after a long time,” he said in a statement. “In the main there was a red flag that didn't help because I was in a good position from not the best gate pick. The restart I got pushed off the track. We are here to learn and I know I have the speed. Jason [Anderson] is riding good; he won tonight and I can learn from him too. We will just keep pushing with the team and try to be with him in the top 5."

Broc Tickle finished outside the top ten for just the fourth time since 2014 at Anaheim. Tickle, who finished eleventh, said it was a pretty rough day. “I struggled throughout the day,” he said in a Soaring Eagle/Jimmy John’s RCH Suzuki statement. “I had a hard time getting comfortable and the track was awkward for me. As the day went on, I improved and ended up 11th in the main, so that’s not too bad. Obviously, not where I wanted to be so I’m looking forward to improving next week.”

Let's look at some notes regarding lap times.

You would have thought, for sure, that Jason Anderson had the fastest time on Saturday night, right? Well, it's all about the early sprint laps in supercross, and that's where Tomac did his best work. Give Eli some time to work on the finishes—he's coming back from major injury.

Anderson hit his hot streak in the center of the race, lap nine. He then unleashed a flurry, running 1:02 laps all the way through lap 13. He threw in another 1:02 on lap 16 for good measure. By the way, when Anderson ran that 1:02.104 on lap nine, the next fastest rider on the track was Ken Roczen with a 1:03.134. So that means Anderson was a full second faster than anyone else on the track on that lap!

We can break Anderson's charge down even further thanks to the AMA's segment times, where they actually break the track into four quarters. Anderson did his damage in the first segment of the track, which would start at the finish line jump, and include the dragon's back, the sand turn and the tunnel jump. On that blazing lap nine, Anderson completed that section in 16.743 seconds. He was in second place at the time. The leader, Cole Seely, did it in 17.467 seconds, and third place Trey Canard did it in 17.961. That means Anderson was 1.2 seconds faster than Canard in that one quarter of the track alone.

The segment times also give you a clue about how tracks can change. Anderson's 16.743 through that segment was great, but out of nowhere, on lap 18, Tomac got through it in 16.742. Our guess is that the sand turn got quicker by the end of the night. Lines were changing throughout the race in that corner.

It was a tale of two races for Seely. He ran in the 1:02 - 1:03 range from the start until lap 12. Then hit hit 1:04 on lap 13. One lap later, he lost the lead to Anderson. On lap 20, he ran a 1:06, putting him into the clutches of Ryan Dungey, who did a 1:04 to make the pass for second. "I had the worst stomach ache of my life, and I’ve said that before but the nerves were just getting to me hardcore," said Seely. The opener does strange things to people.

Speaking of strange, a note for the consistency of Dean Wilson. He ran identical lap times, down to the thousandth of a second, on laps six and seven. So, Dean literally didn't beat himself at Anaheim.

By now you know Justin Barcia suffered an epic and unfortunate fade due to arm pump, falling from second to tenth, before crashing and taking 15th. We looked at Barcia's laps, and noted he ran in the 1:02 and 1:03 lap time range until suddenly going 1:05 on lap seven, and then staying in the 1:05 to even 1:07 range most of the rest of the race. Look at Barcia's time on lap nine compared to what he did earlier in the race. Again, strange things happen when dudes are nervous at the opener.

Look at this, Webb's best was barely better than Nelson's. How did he make up so much ground, then? Persistence. By lap four, Cooper was in his groove and started making up tenths on Nelson. Nelson gave it everything he had, but when Cooper made the pass on lap 10, it was over. Nelson went from 1:03s to a 1:05 on lap 11.

The book on GEICO Honda’s Jordon Smith and Monster Energy/Pro Circuit Kawasaki’s Chris Alldredge in their rookie season was: fast, but can’t stay off the ground. Neither did anything to dispel those concerns on Saturday as both made mistakes. Smith’s was costly, as he was in the running for a podium before washing out the front end. He did rebound to finish fifth. “Last year [rookie pro season] I got a fourth but it was a come-from-behind race, so this time it was good to run at the front of the pack,” he said. “I just need to get used to it. I can definitely take some positives from it.”

Alldredge finished twenty-first on the night. "We made the best of the situation tonight... I know we have the speed to run at the front and I'm very capable of racing for podium wins,” he said. “I'm looking forward to riding during the week, putting down some laps, and working on what I know I need to improve…"

Christian Craig’s return to supercross came with a lot of ups and downs. Craig certainly showed speed, but crashed early in the main after tangling with Joey Savatgy. He crashed again later in the main and finished seventeenth. “[I] Went into the main and knew I could run top five or get on the podium,” he said in a statement. “I ended up tangling out of the gate with someone. Made some quick passes, was going to pass [Joey] Savatgy and I clipped his front wheel. Pretty much ended my night, my wheel hit his footpeg and it broke a couple spokes in my front wheel, I had to pull into the mechanic’s area to get them pulled out. I went back out there and salvaged what I could. I’m healthy and looking forward to next weekend to show what I’ve got.”

Impressive performance from 51FIFTY Yamaha’s Hayden Mellross in his first-ever Monster Energy Supercross on Saturday. The Australian finished just outside the top ten in eleventh. "I'm so relieved to finish my first supercross here in the states", exclaimed Mellross in a statement. "Most of my family was here from Australia and I'm glad I was able to put in a solid for them, the team, and for myself. It was a dream come true to finally race supercross, I'm proud of how I rode and am confident I'll improve as the season progresses. Just a great night overall!"

Another Australian had reason to be happy, as Lawson Bopping rode his DPH Motorsports Yamaha into the main event, and finished twenty-first. He looked darned fast all night. We counted seventeen factory 450 riders in the main, and outside of Bopping the other privateers were established names: Jake Weimer, Mike Alessi, Tommy Hahn and Kyle Chisholm.

We asked Justin Bogle how his switch to a 450 had gone during the off-season, and he admitted that it wasn’t so good because he actually broke his foot six weeks ago. He only got back on the bike this week, and had not done twenty laps until the main event. A thirteenth sounds pretty strong in that case!