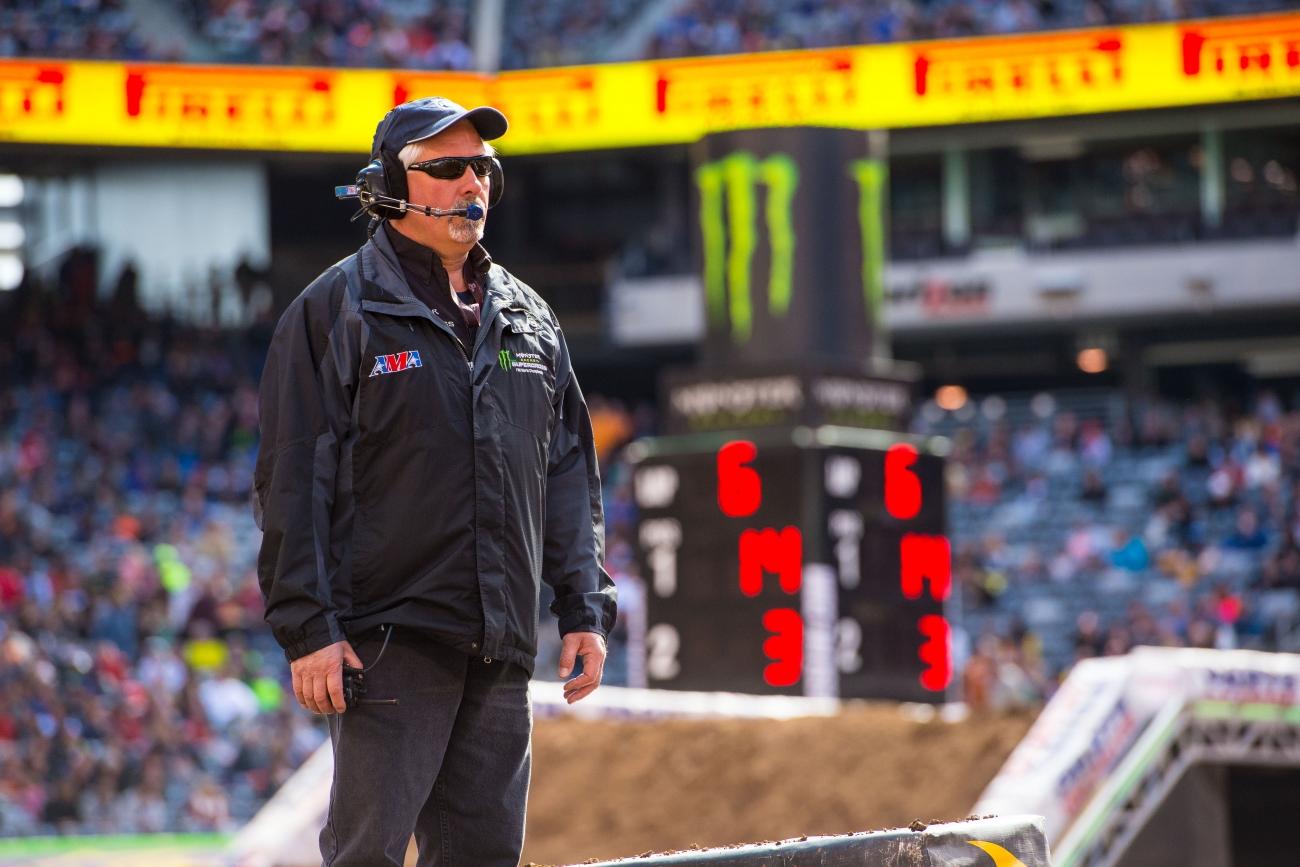 450 Words Peick, Friese and Their Bosses

By now you’ve surely seen the video of the Weston Peick/Vince Friese incident at Anaheim, where Friese took Peick down in a semi qualifier, and Peick snapped, raining punches down on Friese’s helmet, before shoving him and flipping him off.

After the race we were unable to get a comment from either rider (Friese didn’t make the main and wasn’t in the SmarTop MotoConcepts rig when we went there at the end of the night; Peick chose not to talk to the media) but we did discuss the issue with the respective team owners.

We also spoke with the FIM’s John Gallagher, who decided on penalties. Here’s what they had to say.

John Gallagher, FIM: The biggest issue is the fact that haymakers were being thrown. I can’t ever have that happen. He’s gonna be paying $5,000 as a penalty, Weston Peick, and he will sit out next weekend in San Diego. It was also explained to his team after the incident that he was done for the night.

What about Vince?
There's going to be a press release out on that and I'll allude to it probably tomorrow or early in the week, but in regards to Vince, there's no penalties.

Coy Gibbs, owner, Autotrader.com/Monster Energy/Toyota Yamaha: I mean, you definitely can’t condone what Weston did. He just snapped. It’s unfortunate and I’m sure he feels bad about it—I know he does. Friese definitely is an aggressive rider, some would categorize him as aggressive or endangering others, and he probably has been for awhile. I like Friese, he’s a good kid, I’ve talked to him before. But, you know, twice in one night, that probably pushed Weston over the edge. You get what you get, I guess. That’s what happened.

So the team is not disagreeing with the penalty?
No. I think the penalty is fair. You can’t have guys fighting on the track. That’s definitely not what we want, not for the sport, or our sponsors or our team.

Has there been any heat from sponsors?
I think you always get concerned, for sure. I’ll definitely touch base with everybody. I think this is just a matter of knowing that Weston snapped. I spoke to him after the race. He apologized right way. He feels remorse for what he did. Now it’s just a matter of making sure nothing like this happens again.

Mike Genova, owner, SmarTop MotoConcepts: It’s pretty cut and dry. Vince [Friese] was racing and racing hard, and didn’t intend to knock [Weston] Peick down. Both guys are hard chargers and have the same mindset, and it got tight and they crashed. But that kind of behavior is not acceptable, and not only does it blacken the eye of the sport, it jeopardizes Vince’s health. What would we be doing right now if he’d have hurt him? We have a lot of money invested in him and we care about him. For obvious reasons, that’s not acceptable. Hopefully they’ll pass out due justice, and in our opinion it should be a multi-race suspension. I’ve never seen anything like it.

I feel for the JGR guys, and I was talking to Jeremy Albrecht [JGR team manager] and I said I was sorry, but I was going to have to press the issue pretty hard. He was embarrassed and he said the whole thing was stupid. He was embarrassed and he should be, and Weston should be too. We’ve not seen anyone from their organization and apologize at all, and I would do that if the shoe was on the other foot. I’m assuming it’s going to be something Weston regrets if he doesn’t already. I’m extremely proud of Vince for being so classy and demonstrating so much self-control. Vince doesn’t take crap from anybody.

Vince does have a bit of a reputation for riding rough. Was he too rough tonight, or was it just racing?
Well everyone has a different opinion on that, and everyone says Vince has a reputation for that, but 70 percent of the guys in these pits have a reputation for that. That’s what it takes to compete at this level. Does Vince have a reputation any more than anyone else? I don’t know. But we’re not getting any heat from the AMA, and they don’t think we did anything wrong. He didn’t intentionally do that, he was just trying to get underneath Weston, and Weston could have backed off a little too. If we’d have done anything wrong we’d be getting heat, but they’ve totally cleared us. Unfortunately, I’ve been told that the media guys all point the finger at Vince, and that he provoked it, but come on, we’ve all see the likes of Ricky Carmichael and Kevin Windham and guys like that do things, and it’s just called racing. If you dent the guy’s fender in NASCAR it doesn’t give him the right to T-bone you. Do we think Vince dented his fender? Yeah probably, but these things happen. There’s a lot going on in these races, and I find it comical that anyone would think it was an extreme, blatant, dirty move by Vince. And Weston got nasty with Vince a few turns earlier; he whipped it in front of him over a triple. But of course nobody saw that.

I can tell you if it had been one of my guys who did that, I’d suspend him right away. If one of my guys demonstrated that kind of lack of self-control, discipline, class, and respect, he’d have a big problem and it would be from me. So we’ll see what those guys do. I know Jeremy Albrecht was really embarrassed.