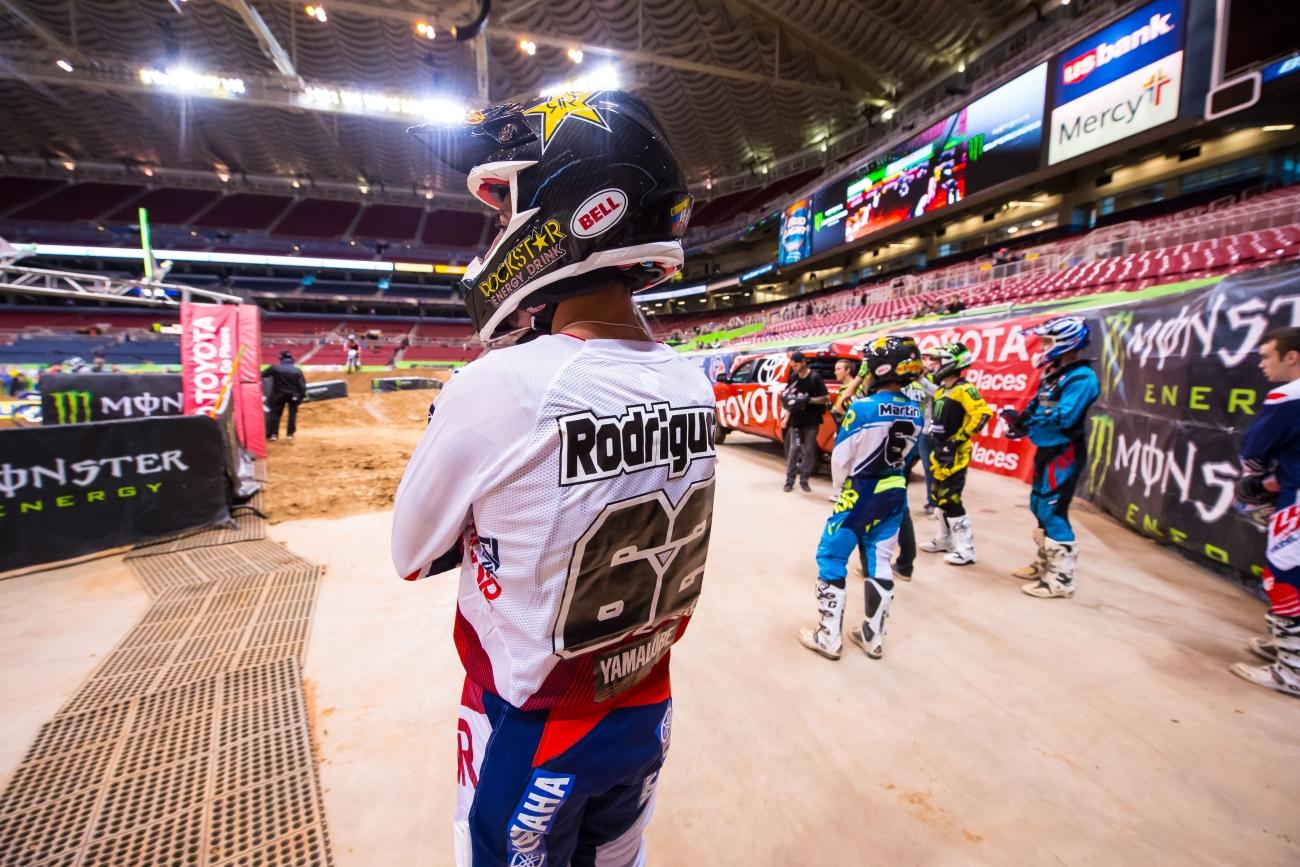 It’s easy to look at the twenty-three races he’s missed during his first two years as a professional and quickly surmise that Anthony Rodriguez is injury-prone. And while that may or may not have been the case in his first year, Rodriguez made an effort to change in 2015, riding at what he says was “80 percent” in supercross, just to show he could make a full season. He completed all eight rounds (nine including Vegas) of the 250SX East Region last year, finishing sixth overall—two points behind RJ Hampshire for fifth.

Following a fifth place finish at the Lucas Oil Pro Motocross season opener, Rodriguez was injured in a bizarre accident while practicing at Perris Raceway, when someone cut in front of him exiting the track. He would return at Budds Creek, but due to another incident at RedBud that was out of his control would miss the remainder of the season.

After two years under the Yamalube/Star Racing tent, Rodriguez headed to Australia to try a Honda for the Penrite team in Australian SX, but that unraveled quickly, as A-Rod completed just two rounds before returning to the US to concentrate on supercross. According to MotoOnline.com.au, “The departure of Rodriguez came following a disastrous opening two rounds at Bathurst and Jimboomba, suffering non-finishes at the pair of them upon the aggravation of existing injuries prior to his Australian arrival.”

Rodriguez will begin 2016 with Maryland based Traders Racing Kawasaki—hoping to bring the young team to new heights. We caught up with him via email last week to chat about his experience in Australia during this off-season, his new team and more.

Racer X: You recently had the chance to compete in the Australian Supercross Championship. Unfortunately it ended a few rounds early for you. How did the opportunity present itself and what were your thoughts on the series?
Anthony Rodriguez: Yarrive, the owner of the team [Penrite Honda], contacted Ms. Colleen Millsaps to ask her if she knew of a rider that would be available to race and she knew I was capable of doing it. With little time to get ready, I decided to go ahead and compete. I wish I could have had more time to get ready and get more used to the bike so that my confidence level could have been greater than what it was. Unfortunately, things didn’t go well for me. I decided to come back to the USA to get ready for East Coast. Thankfully the team, including Yarrive, Steve, George, Blair And Cameron (Cam), understood where I was standing and thankfully were ok with me leaving, even though it led to Yarrive having to find a fill in rider.

Were you able to spend much time just being a tourist? How was that experience for you and what are some of things you were able to do?
The experience was amazing. I even got a special tour of the V8 Supercars race in Jimboomba thanks to the Penrite team. They also showed me the race car and all of the data they recorded to make the car work at its best. I also spent a day or two in Melbourne with [Jimmy] Decotis, Jamie, and Gavin [Faith] which was pretty cool since I live in Cairo, GA, and don’t get to see tall buildings! [Laughs] Also, I would like to give a special thanks to the Krusic family and Tracy for making me feel like I was at home.

Now that you’re back in the states, we just saw you signed with Traders Racing for 2016. How did the deal come about and how do you feel on the new bike?
I haven’t yet gotten to ride the bike but I met Gary, the team owner, at Mini Os and we started talking and later on he made me an offer and I can already tell the team has a very friendly attitude so I’m looking forward to it.

Unfortunately your first season and the latter half of your second season were marred by injury. Entering 2016, how important is it to make it through the entire season healthy?
My main goal last year was that. I honestly rode supercross at my 80 percent just to show the motocross industry that I can finish a season no problem and that 80 percent was good enough to get sixth in the championship. That sixth place finish was only two points away from fifth as well. When it came to outdoors, I felt good on and off the bike and I think I showed people that by getting fifth overall at Hangtown. As I was getting ready for Glen Helen, I was riding at Perris and some dude totally just crossed in front of me as he was trying to exit the track and as you can imagine there was nothing I could do. Following that crash, when the doctor released me to start riding, I started prepping for racing again. But at the second race back someone cross jumped me and I went down again. Even though it wasn’t a consequence of a bad choice or mistake by me or the other rider involved, he obviously didn’t want this to happen. He actually apologized to me and I told him “It’s all right, don’t feel bad, it happens.” Unfortunately, that was the end of outdoors for me. So back to the question, my answer is: I know I can finish a season no problem. I’m not sketchy, I’m not just a dude that holds it wide and isn’t afraid, I’m actually smooth and very dedicated and the speed that I have doesn’t come from being wild it comes from my skills and dedication to the sport. Finishing a whole season isn’t a question for me. I know I can do it no problem as long as no other rider’s decisions or mistakes affect me. My goal this year is to be where I deserve to be.

I know you’ve spent the majority of your time in America, but is it hard being away from family this time of year? How often do you get to travel to Venezuela and see them?
I’ve been here for six years now and my English has gotten much better. Not knowing the language was one of the things that made it difficult at first. I didn’t go to Venezuela for two years, but I just went recently so it was super nice to see my family even if they are a crazy combo! [Laughs] The last two years I didn’t spend Christmas with my family but thankfully this year I’m going to since they came to visit me. By the way, the five of us living in a motorhome is pretty funny. It’s kind of like watching a circus. [Laughs]

Do you spend the holidays in America or do you get to travel home?
Over the last six years I’ve spent four of them here in America.

This may be the most cliché question in all of sports, but have your expectations changed after two years with a factory-supported team to now?
It totally has. Today I’m for sure the most inspired I’ve ever been in my entire life and my goals are very different than what they have been in the past. I’m excited that I have been given this opportunity to make history as a privateer rider for Traders Kawasaki. I am looking forward to this upcoming season and hope to show people what I am truly capable of.