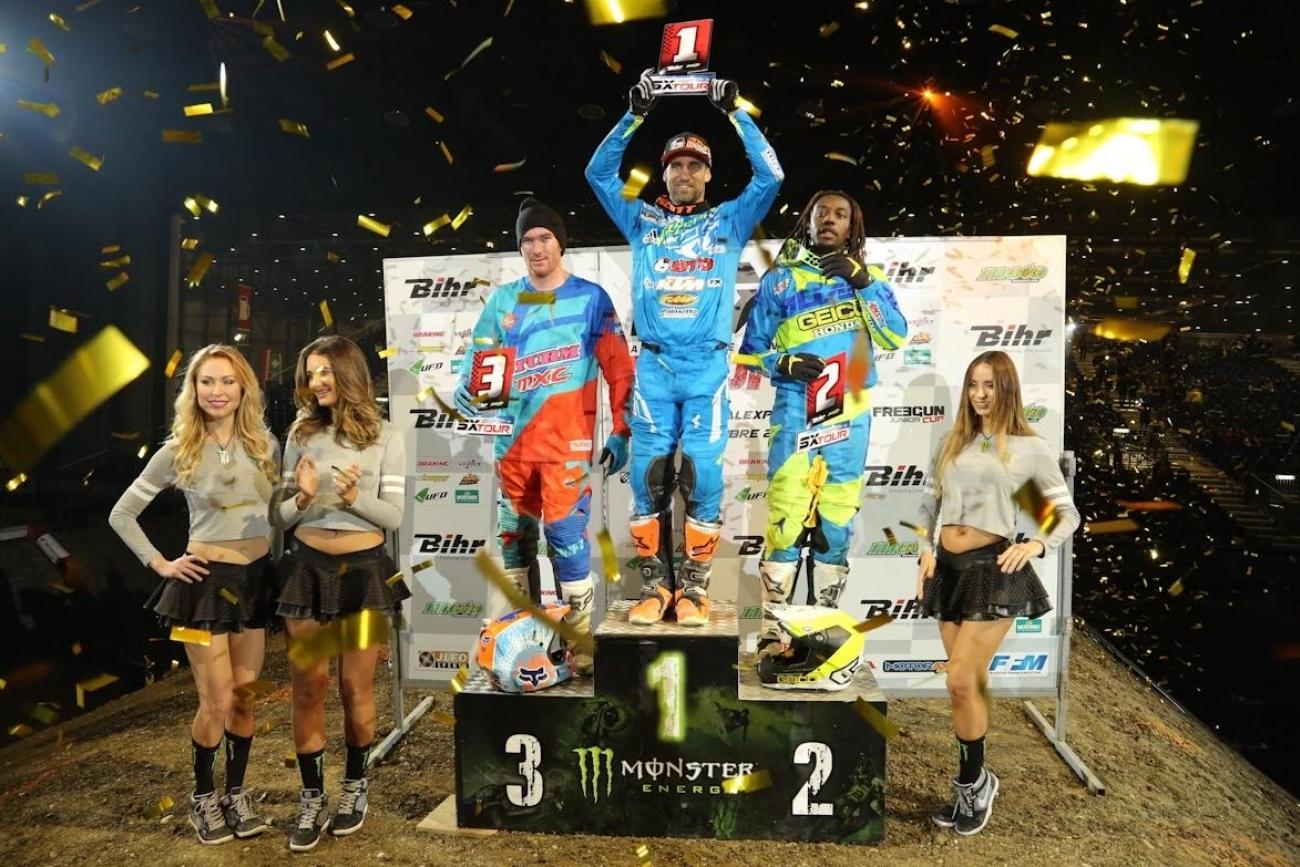 Along with Bercy Supercross (Lille), the Geneva Supercross in Switzerland has been going for more than twenty years. This year marked the thirtieth year of the race, whether it was an actual World Supercross round or an arenacross round like a few years back. The Swiss—they are into supercross, freestyle motocross, chicks who wave fire wands around and beer. Not in that order either.

[Note: It’s late (or early), so I apologize for the brief race report and combine that with the fact I didn’t do one for Friday night’s race and Weege is probably going to be pissed. Hey, bro, I’m on my fourth trip to Europe in two and a half months, cut me some slack.]

Geneva was certainly hurt by some injuries to KTM riders Andrew Short and Marvin Musquin. And Josh Hansen and Mike Brown were also on the verge of coming but didn’t for whatever reason. Maybe they had to go to the same party, we’re not sure. The Americans that did show up were GEICO Honda’s Malcolm Stewart, who apparently just loves racing over here, as this was his fourth trip to Europe in 2015. BTOSports.com KTM’s Justin Brayton, who won in Bulgaria and Genoa already this winter, also made the trip.

The track was pretty long and a bit technical at the same time with a long whoop section and then a rhythm section that challenged everyone not named Brayton. The dirt was its typical soft texture and rutted up pretty easily. Stewart has been on his 250F the entire winter SX season and this track more than others challenged the smaller motor.

When it was all said and done, Brayton won both main events rather handily and with those finishes claimed the King of Geneva crown for the fourth time, tying him for most all-time with David Vuillemin. Saturday’s main came easy as he holeshot and slowly pulled away from Fabian Izoird, but Friday’s win was a little hectic as he pushed his front end in the turn after the whoops and Stewart slipped by. Brayton worked hard to get back by the GEICO rider and managed to win by just over a second.

Brayton won both heats as well, although he had to work for it on Saturday after a semi-poor start. About the only thing Brayton didn’t win at was fastest qualifier on Saturday, as Gregory Aranda took that from him. Brayton was the only rider to go 3-4-3 in the long rhythm section and his whoop speed was by far the best.

After a strong second on Friday, Stewart went down in the first turn on Saturday and was dead last. Pinning it on the smaller bike, Mookie worked hard to try and fight through the 450’s and made it all the way to sixth. He did win his heats both night’s and was generally the second fastest rider behind Brayton, although his 2-6 scores don’t show it.

Izoird was good with a couple of fourth places and he extended his lead in the French SX championship over Cedric Soubeyras with one round left. Valentin Teillet used consistent finishes to end up fourth overall behind Brayton, Stewart and Fabien Izoird.

With wins in Bulgaria, Genoa and now Geneva, Justin Brayton has set himself up to carry some momentum into the start of the series that really matters, the 2016 Monster Energy Supercross Championship. He’s looking to put a sub-par 2015, by his standards, behind him, and after watching him at all three races in Europe, he looks to be ready.

That’s it from Europe. It’s been a long “off-season”, but we hope this has helped keep you sane while we wait for the Monster Energy Supercross opener on January 9.