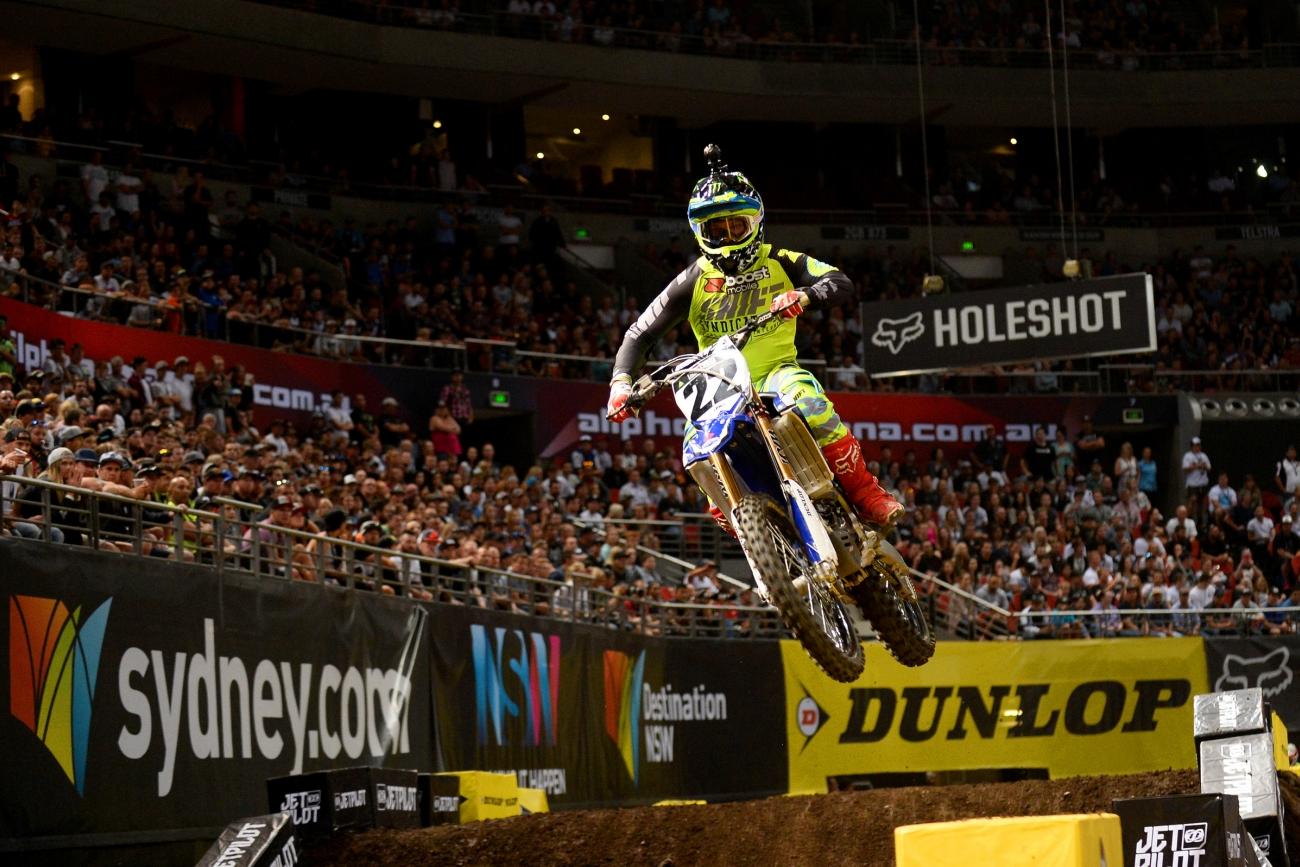 MotoOnline.com.au editor-in-chief Alex Gobert was in attendance for the inaugural AUS-X Open in Sydney on Saturday night. He filed this report from night one.

It was an event that has firmly placed Australia back on the international supercross radar as the inaugural AUS-X Open (Australian Open of Supercross) was staged on Saturday night inside the tight confines of Sydney Olympic Park’s Allphones Arena.

And it was a result the sellout hometown fans had paid to see—Australia’s very own global supercross icon Chad Reed storming to the 20-lap main event victory in a dominant wire-to-wire performance that delighted onlookers. It was the highest profile supercross in the history of the country’s national competition.

“I’m super-pumped to win here in front of the home crowd at the AUS-X Open in Sydney,” said Reed. “To see all these fans here at Allphones Arena going absolutely nuts all night is massive for supercross in Australia and I can’t thank everyone enough for getting behind the AUS-X Open."

Reed won the final over AMSOIL Arenacross number three Gavin Faith (Penrite Honda), the two-time Australian SX2 class champion maintaining pressure on the home hero throughout the duration. It was Faith’s second SX1 podium of the season Down Under in his rookie 450 campaign.

A pivotal third place on the podium sees Dan Reardon (CDR Yamaha) all but clinch the 2015 title, which is a remarkable feat considering he retired over two years ago before returning this season. He has one hand on the trophy after arch-rival Matt Moss (Team Motul Suzuki) crashed twice in the final—his second fall forcing him out altogether.

Current Western Regional AMA 250SX Champion Cooper Webb (Yamalube/Star Racing Yamaha) suffered from a bad start in the main event, and was at the rear of the field exiting the first turn before working his way through the pack for fourth. A start on Sunday’s second day will certainly increase his chances of challenging Reed at home.

Perhaps the most popular man of the night was the GOAT, Ricky Carmichael, making his first appearance in Australia (also here for his upcoming RCU programs). He was greeted by huge roar during opening ceremonies. Carmichael, like Webb, was a late addition following James Stewart’s exit due to an ankle injury sustained at Bercy-Lille in France earlier this month.

Carmichael lapped in the timed practice and qualifying sessions without a transponder—unofficially around a second off the front-running times—and took part in a three lap head-to-head duel with Reed prior to the mains. It wasn’t at “full” speed, but the crowd soaked up every minute of it as the two legends battled in Australia over a decade since their epic rivalry began.

Like the Monster Energy Cup, there were a number of unique novelties added to the AUS-X Open circuit, including a 360 Fly-by shortcut lane that riders were permitted to take once during the main event, resulting in an assortment of passes that took place early in the finals.

The finish line featured an FMX-style up-ramp, which prompted freestyle showman/part-time racer Robbie Marshall to back-flip during the mid-stages of the SX1 main event. A tunnel, which saw riders momentarily out of sight from the spectators, also created its fair share of drama through the opening night.

The coveted Monster Energy Best Trick award went to Australian wild man Jackson Strong for a one-handed front-flip that earned him the score of a perfect 10, edging out Japan’s Taka Higashino in second and fellow countryman Rob Adelberg in third. Tom Pages crashed but was unhurt in his alley-oop flair attempt.

Day two of the AUS-X Open will be a Sunday afternoon race, albeit it is held as a non-championship round after it was added to the calendar once the opening event quickly sold out.